Elaine went to camp and came back again. 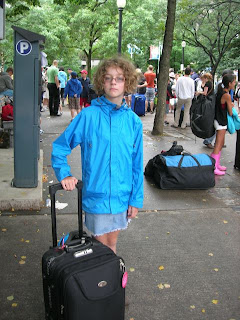 The weather was iffy when she set off, but the raincoat was soon cast aside. 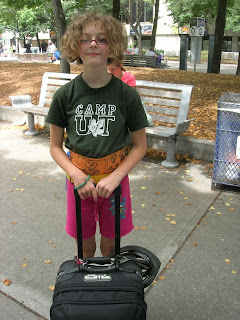 She seemed to enjoy herself. She macraméd a bracelet and decorated a pirate sash. What more could one ask for, really?

We had artichokes for dinner last night. We cooked them and dipped the leaves in melted butter. 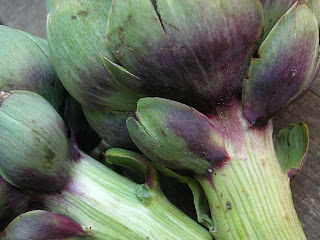 The best part is the butter, I think! 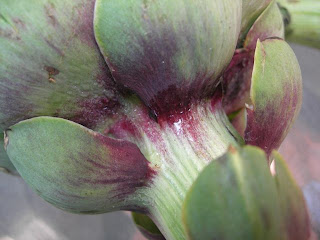 And they are very delightful and crazy looking!

Somewhere in my wanderings I came across a recipe for lemony cookies.  Three ingredients: lemon cake mix, Cool Whip, and an egg. Roll the dough in icing sugar, and cook 'em. 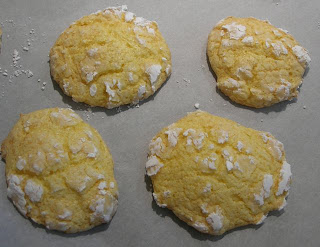 Unfortunately, one can't really make cookies with cake mix that don't come out rather cakey. And perhaps the Cool Whip makes the texture a bit gluey. Maybe I should have cooked them a minute longer. The idea is rather fun, though. 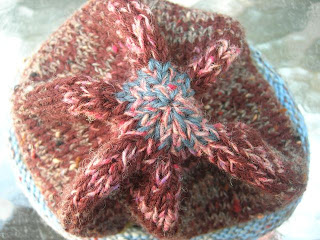 It's certainly hot for this weather, but it'll go in the box to go to charity this fall. 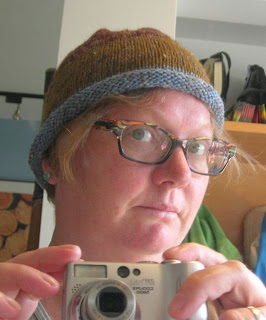 It really fits a head a bit smaller than mine. Ninety-six stitches on a 4 mm needle, knit knit knit knit.
Posted by Mary deB at 5:12 pm 2 comments:

It was pretty exciting 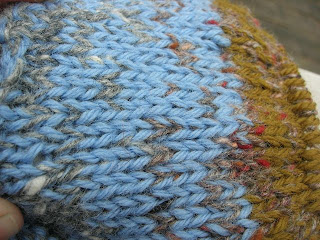 I was late to the party, but today, finally, I went to see the last Harry Potter movie. I had wound up this mixture of 3-ply yarns held together and cast on 96 stitches before I went, meaning to knit a 2x2 ribbed hat. After a row of that, during the previews, in the dark, I decided this would be a stockinette roll-brim hat. My hands just kept knitting and knitting, as Harry and his friends triumphed over evil and all that. 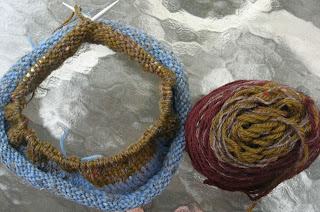 Why oh why do they have to change things so much?

I understand the whole "books and movies are different" thing, and all that stuff under the invisibility cloak would be kinda boring to watch, I suppose.... but I don't like liberties being taken with characters, and I don't like changing scenes just for the sake of putting in some excessive special effect.

I am glad I saw it. Parts were pretty gripping and I did love the whole Gringott's affair. But, meh. Not something I have to rewatch... though probably I will see it again soon, since Elaine is away at camp this week and will likely want to see it sometime.

A sock is done!

I started this when I thought I had lost my grey sock... which has been found and newly ignored! This sock went to NYC and Turkey Point, while the grey one sits alone in a bag.

Now the question is: do I knit the second one of these, or go back to the grey one?

I'm thinking grey, but also I'm thinking that I shall ignore all socks for a moment and get back to my denim pullover! 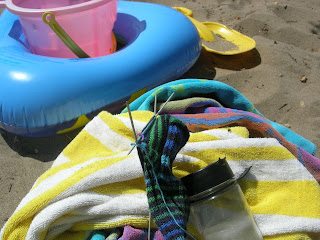 We went to a little town called Turkey Point, on the shores of Lake Erie. Little did we know, we walked right into the wildest weekend of the year, the Pottahawk Piss-up! People congregated in Turkey Point, parked their motorbikes and switched to boats, and then went away to get drunk at Pottahawk, so we really didn't notice them much! Certainly the beach was much more crowded on the weekend, but I'm not sure how much that had to do with that party!

Anyways, we enjoyed the beach:

Elaine swimming, or at least, about to swim. It was pretty darn cold, but "one gets used to it." The beaches all along that stretch of shore are very gently sloping, so that it was practically impossible to get in over your head, even if you are 11. I even went in, although with my glasses on, I didn't dunk my head... Best to be able to see, I figured. 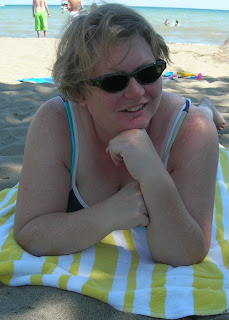 See, Mary in a bathing suit... 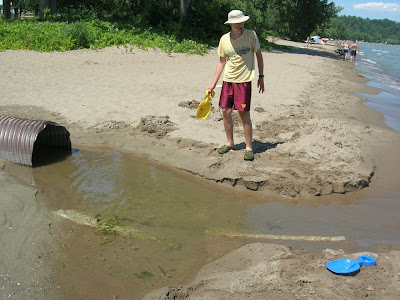 Arthur did some swimming, too, but his forte is digging. This culvert had been sorely neglected, as you can see by some remaining green scummy stuff. But our heroes went and opened the passage for the water to get to the lake.

Besides the beach, we tried out the local mini-golf course. What a perfectly silly thing to do! We had to put the ball through a cannon, up into a funnel, round a loop-de-loo and so on! 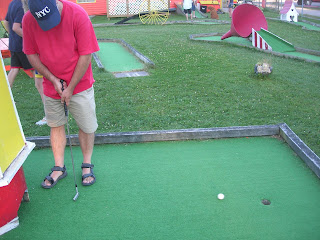 Stephen also led the team in puzzle-doing. We worked on this dang 1000-piece view from the Empire State Building the whole week, finishing it on, I think, our penultimate day. That single row of sky was the killer. Well, and the big shadow. And the fact that really, one brownish building with windows looks much like any other! 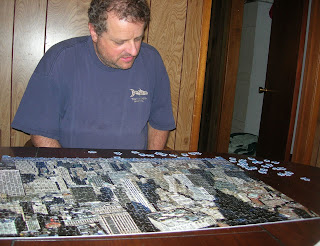 Now we are back safe and sound, with the kids hanging around for a week before stints at various camps start next week. I was down in the basement with a week's worth of laundry for a day or two, but think that's more or less under control now. I'll show you my sock soon -- it's almost done, really!

Back in a while

We are off for a week of fun in the sun. 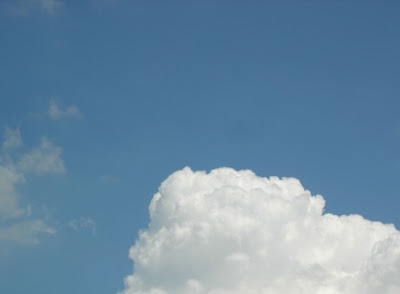 Even when your kids are taller than you and have yet again outgrown all the clothes you ever bought them, you still need to pack a large variety of sand toys when you go to the beach! 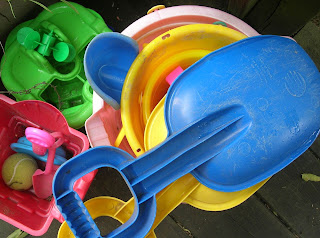 Will there be knitting? Sock or sweater?
Posted by Mary deB at 7:34 am 3 comments:

Marking the passing of time

It is 6 years and a few days since I started blogging! Good heavens.

This took me by surprise, and I'm not able to celebrate properly just now, but perhaps we'll have a real blogiversary affair for six years and a month!

I have got into the patterning on the pullover. It is not hard to remember what to do where; in fact, I think it will begin to get tedious after a while! But I did choose this one with long vertical stripes of the same pattern, over the equally gorgeous Fleet, where the stitch pattern changes a lot and one must always have the directions to hand!

I seem to have put my cable needle down somewhere, and with such little stitches I do feel better using one, so I'd best find it. 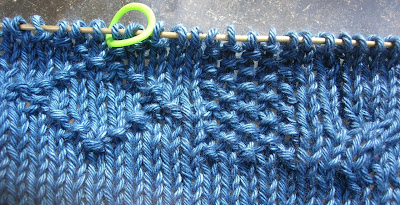 I guess that looks like a sort of silly place to put a marker, but it is the middle of the row. The pattern just throws you on to the chart, without writing out a set-up row, so I was feeling a bit uncertain for a moment there. I suppose I can take that marker off now!


Some funny shadows can be made with the late afternoon sun:

And now for something completely different:


I was dropping Elaine at a friend's house the other day and saw a gorgeous photo over their fireplace. A big picture of big books. So I am taking pictures of a few shelves.


Lighting is a problem, especially with shiny book covers. I do love digital photography: I would never have taken a bunch of pictures of bookshelves with film!
Posted by Mary deB at 4:15 pm No comments: