Busy around here these days.... 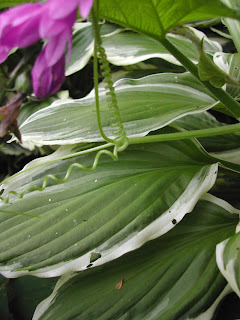 But not too busy to notice all the passersby gawking at our tendrils! 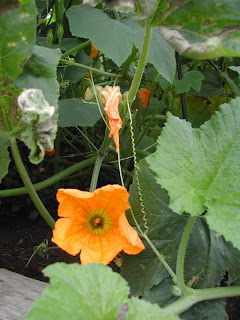 Well, they can't miss the leaves, either! 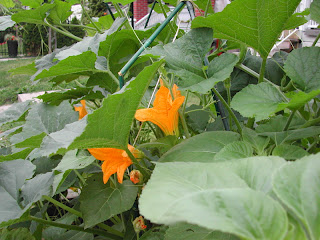 Oh, yeah, I have done some knitting, but it's so much more fun to photograph a plant than a bit of knitting! (Click to embiggen the pictures!)
Posted by Mary deB at 10:43 am 1 comment:

Stumped at the yoke 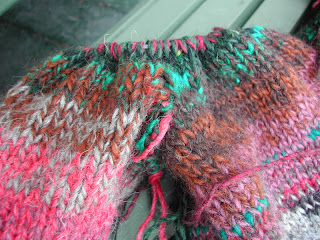 Ah, stumped. Yes, thanks, OfTroy (pleased to meet you!), but this is not a "how do I do this" stumped... This is an Artistic Crisis.

I've got the bits joined together, and I can knit a few rows, but then I have to decide the Big Question: Do I put the inspiration first, or do I just try to make a beautiful sweater, that may or may not actually represent the thing that made me want to make it in the first place? I don't want it to be such an "in-joke" that only the recipient and I will know why on earth the sweater looks like that! But somehow I have to get that one clue across...

And the horror is, I can't show you the inspiration, because then the person connected with it could see, and the surprise would be gone. But I think it might look funny if I went too literal, you know what I mean? No.... 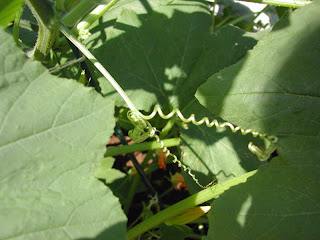 Let's review, shall we?

What about those summer knitting goals?

I finished this! It's about stroller sized. Still not sure about the recipient. I'd send it to Afghans for Afghans, but it's cotton, and they want warm wool, and it's a tad small.

6. Perhaps there's a Kiri in the future, but maybe I'd better finish those 5 things and then check in again! (That link is to a regular blog post with pictures and all; the pdf of the pattern is can be found in the sidebar here.) Ah, not yet! 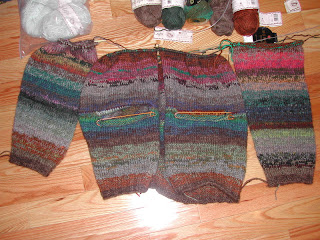 But I have been busy. Let's see.... I made two baby surprise jackets and actually got the buttons sewn on one of them!

And I worked quite a bit on the big Lopi job, got the second sleeve done. Now I'm stumped at the yoke, so don't hold your breath.

Lucky these were summer goals, which can be kind of vague!

And I'll leave you with a picture of my garden. Last fall we got some little ornamental gourds, which were delightful for a while, but eventually got little rotten spots in them, at which point we tossed them out the front door for squirrel amusement. The squirrels amazed us by chewing them immediately into nothingness... But, this spring, all sorts of cute little green things sprouted in the yard, and we, perhaps foolishly, decided to see what happened.... 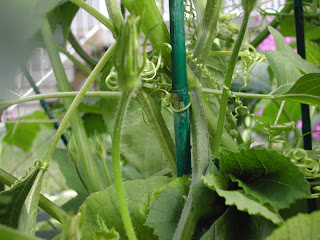 Obviously, a few seeds escaped the squirrels, and now our front yard is covered in greenitude. Love those tendrils!

I've finished the book.
If anyone wants to whisper secretly to me about it, my e-mail is in the sidebar.
Shhhh....
Posted by Mary deB at 12:38 pm No comments: 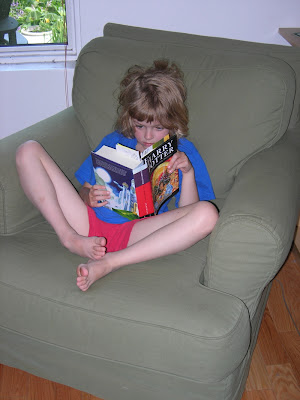 Well, here's what we all wanted to be doing today. Elaine even got ahead of me at one point! But I'll catch up after her bedtime... 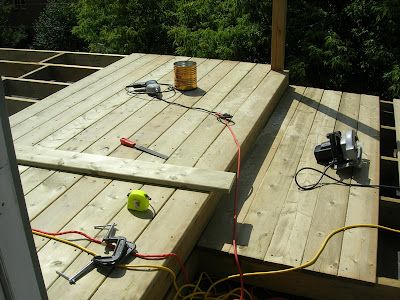 Deck progress. The boys got a new saw today, so things'll be just zipping along. And yes, some cooling liquids are consumed, after the sawing has been done! 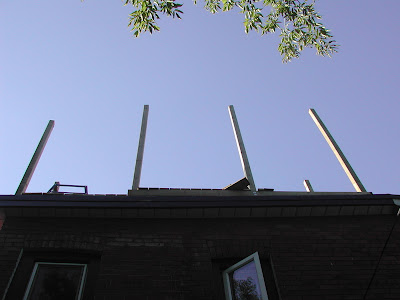 And a belated Saturday sky, with deck posts!
Posted by Mary deB at 8:09 pm No comments:

Back to an old project

Once, long long ago, I started what became known as The Sweater That Makes Me Sneeze, not seen since last November. It's two strands of Lite Lopi and/or Kureyon held together, so the sneezy wool fibers are over the place. But, it is lovely, and it needs to get done, and the weather is such that it's not too crazy to sit outside and make a wool sleeve.

So, although this looks like a very misshapen hat, here's about half of sleeve number 2: 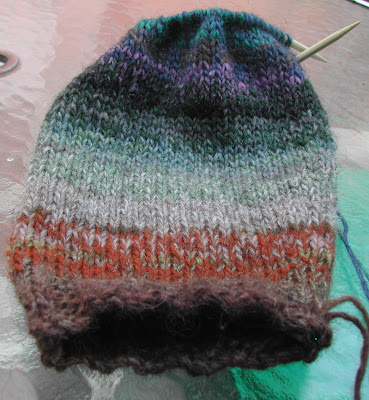 Does it make you think of rocks, trees and water? That's the secret plan, anyways! 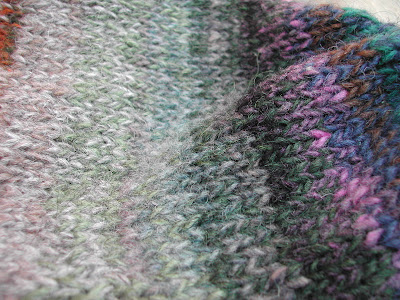 Trouble with socks, and some almost finished knitting

This is why I've been having trouble getting socks to fit Arthur lately. 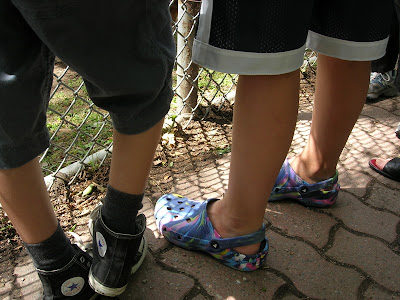 On your left, Arthur's friend's legs, perhaps average 10-year-old legs. And on your right, Arthur's legs. Must discard the kid socks book, move back to the adult socks book!

Whoo hoo, I have done all the knitting on two Baby Surprise Jackets. They used up seven 50g balls of Peer Gynt wool. Buttons and seams to come... 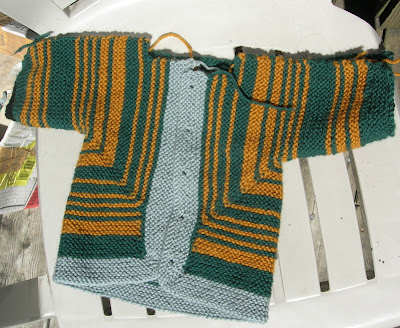 Number 1, all green and gold and regal looking! I am the groovinest baby around, it says. 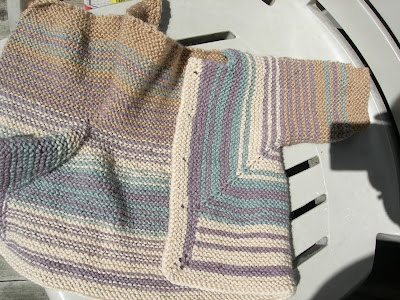 Number 2, all desert mutedness. Please don't bother me, I'm meditating, this one says. The purple was once cream coloured with a bit of a gold fleck, but thanks to grape Kool Aid, it's now just the right sort of greyish-purple, rocks-in-the-distant-sunset colour. 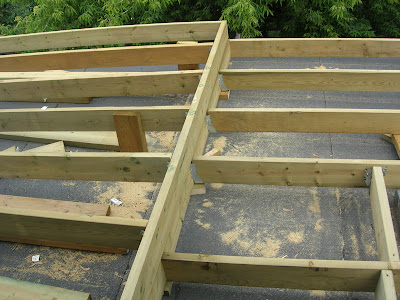 And Stephen wants me to tell you that he is building a deck. There was once a deck here, but it became unsafely rotten, about 10 years ago, and was dismantled. One day soon, we shall have a new one, and a hammock, if all goes according to plan!
Posted by Mary deB at 10:26 am 4 comments: 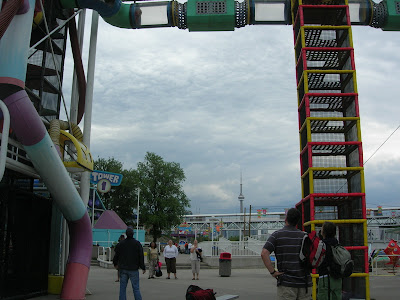 We went out to Ontario Place today, and this is the sky, with CN Tower in the distance, and a big climbing thing for kids. The parents are all looking up to see their kids crawl across in the tube! We had a blast; it wasn't too crowded or too hot; but soon those clouds became too grey and rainy, and we fled the scene.
Posted by Mary deB at 4:31 pm 1 comment:

Toronto is quite a green city. Some, like those of us from the west coast, take a while to appreciate this, because Vancouver and Victoria are so much greener! But, along our streets we have lots of deciduous trees, and we are all thrilled when they put on their leaves in the (late!) spring to provide us with colour and shade. Our street has had a series of trees through the ages, and the largest ones we have now are 70- or 80-year-old Manitoba maples. (I love this sentence: "Although its weak wood, irregular form, and prolific seeding might make it seem like a poor choice for a landscape tree, A. negundo is one of the most common maples in cultivation...") These trees are quite plentiful around our neighbourhood, and they are getting very old -- if there's a big wind, it's these that crash their big branches down! 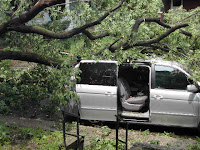 A few years ago, one dropped a huge limb on a family's van.


Luckily no one was hurt! 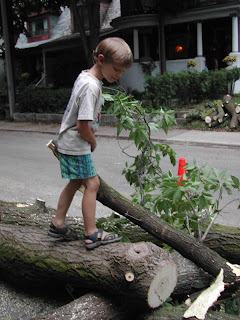 This summer we have been sitting on our stoop looking at the one across the street. Sparse leaves, lots of spindly little empty branches. We would wonder if it could hit our house if it fell... Well, the city guys with chain saws got there before we had to find out, and spent the morning making it into not much more than a big trunk. 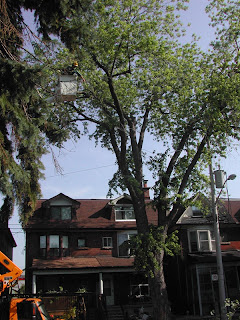 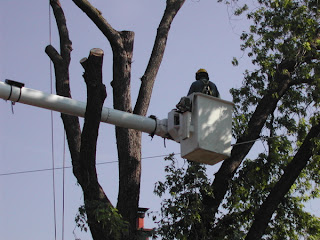 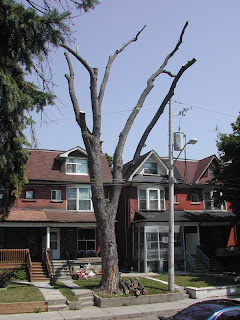 Will they come back later to finish it off, or are they done?
Posted by Mary deB at 11:40 am 3 comments:

Aboard the Titanic, and a few surprises

It's summer, the time for expeditions! The whole fan-damily went to the Ontario Science Centre yesterday. We'd got an advertising blurb mailed specially to us about the Titanic exhibition and so we just had to go check it out. The blurb, unfortunately for us, didn't tell us that it would cost almost $100 for a family of four to see it! However, since we'd already invested quite a bit of time to get there -- why oh why did anyone think that such a thing should be built miles from the centre of town? -- we forked over the cash and enjoyed our day. 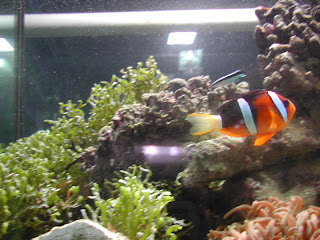 This fish was also at the Science Centre, but not with the Titanic...
When you go into the exhibit, you get a ticket with a real passenger's name on it, and at the end is the list of all passengers and crew, divided by class, and you can see if you lived or died! Elaine and I were both first class ladies, and we both made it, Elaine with her child, but Stephen and Arthur were both in third class, and though Arthur's wife and child survived, both men were, as they say, "lost." You can read all about the ship and the iceberg and the lifeboats and the band playing on, here. The exhibit was really good, but the rest of the Science Centre was so crowded and noisy that who could tell what was what. Rule #1: Go late in the day, when all the day camps have gone home! 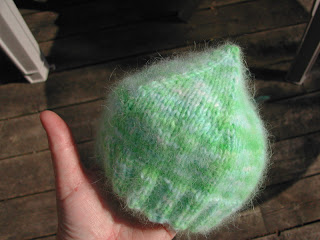 Once upon a time, I made this totally adorable and warm green angora hat. It will go to the Knit Cafe and then to Afghanistan to keep some little head warm. It is so tiny, but they need them for newborns. 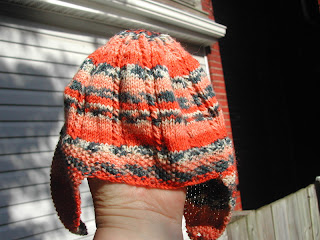 I also made this totally adorable sock-yarn hat, which is called an Orbiter, from this old book, for a baby who is meant to be born sometime around Halloween. Unfortunately, it won't fit for another year or two.... But I have some white angora and might just make another wee hat out of that. In fact, I've been eying all my white and whitish wool lately, thinking of popping it in a pot of KoolAid to see what happens. So, we'll ... see what happens with that!

Right now, though, I am engrossed in the pattern du jour, the Baby Surprise Jacket! Since all the cool kids are doing it, I must do it too. 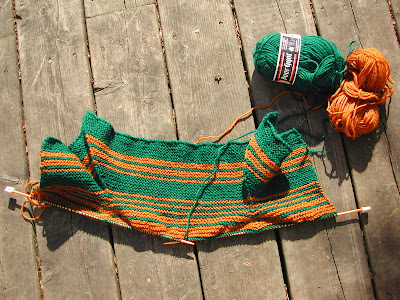 It'll be done in no time, since I can't wait to see how it all works out! I think I'll stick to two colours for this one, but with that KoolAid dye business in mind, we might see something crazier later this summer.