Today we went out to the Beaches, a part of Toronto we venture out to once a year, or even less. Often a beach in the winter can be a bit miserable, with the cold wind blowing in off the lake, but to cheer things up, someone arranged a bunch of art installations, built around the lonely and useless lifeguard chairs. If you go to that link, you can see some of the "big picture."

First up was a knitted thing. Giant. Pink. 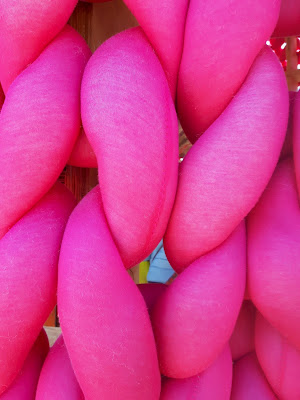 Here's a kid sitting on the lifeguard chair inside the giant pink knitted thing. 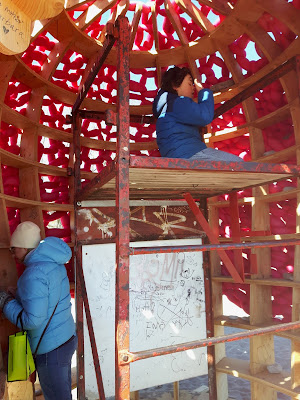 It's a pussy hat, which for some reason has long ties. Very cool. 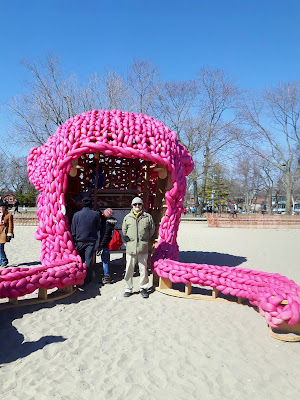 I took a bunch more pictures, but my dang camera is not talking nicely to my dang computer yet, so I have to e-mail the pictures to myself. If I decide now that I want another picture... I just heave a sigh and move on, because I am done with e-mailing pictures for now! But I can tell you that there were some holes in the pink fabric and you could see white fluffy stuffing. I wonder if there is a "making of" video.

This next one was wild! There were cranks on each of the four sides of this big wooden box, and you could turn them and make a siren sound. Wow! Noisy and dizzy-making! 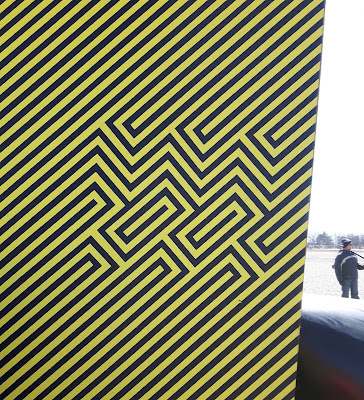 Of course, I was wondering if a knitted blanket like this would be just too crazy. 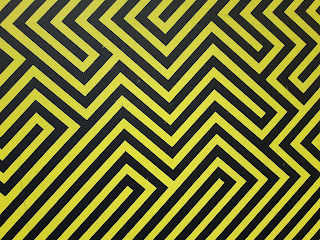 More noise! These big red hanging pieces spun around as you walked past them, and the hardware squeaked and screeched. They look soft, but they are covered plywood. Interactive: you get to walk through the redness. 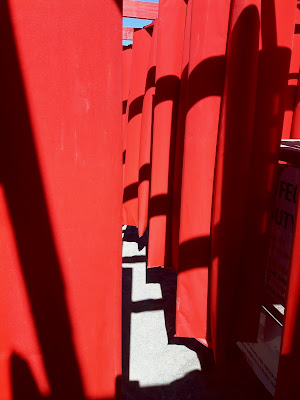 I did not shove the little kids aside to get up on the chair, but apparently you can look at it from above. 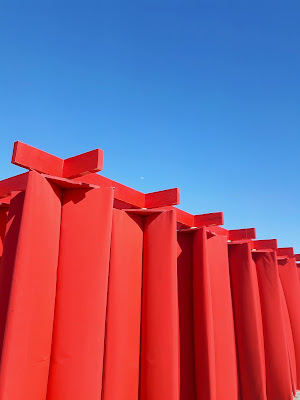 This was a different sort of noisy: hundreds of plastic pinwheels whirring in the wind, on a frame that looks sort of like a nuclear plant cooling tower. Not a CANDU reactor, of course, but it's a symbolic thing. Also looks great against a bright blue sky! 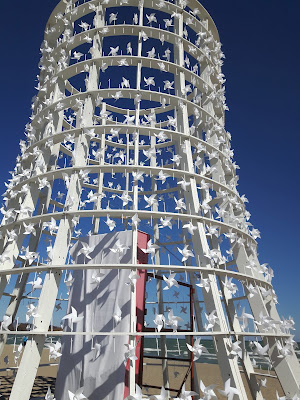 Now, then. This one was meant to make noise, but didn't really! Many tubes, they turned, you could yell into them... 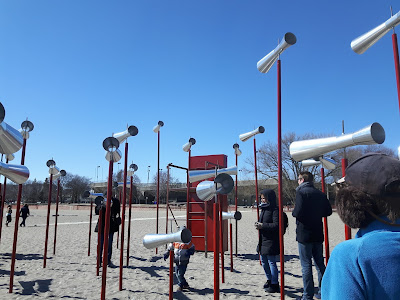 I liked this one but it didn't look like much from outside. This is looking out from the shelter of the covering. Nice. 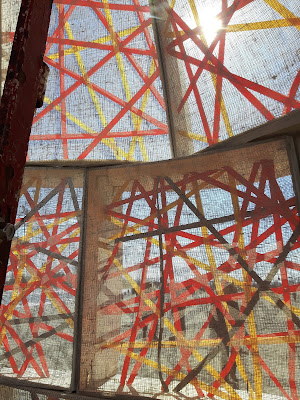 This last one was also hard to photograph in its entirety. Wooden swirls. It looked like giant bookshelves. 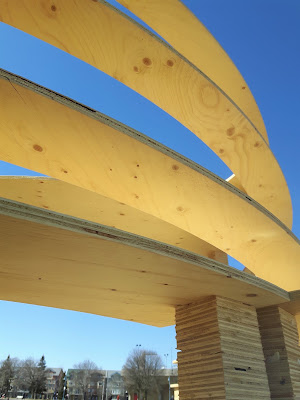 It was really nice to get out and see these, but it was very cold! We saw someone in a wetsuit go out on a paddle board, but everyone else was bundled up against the wind, and the nearby coffee shops were packed. Not a speck of green on the trees anywhere, either. I can't wait for spring!
Posted by Mary deB at 11:04 pm 1 comment:

Fun fact: You can bake things with Miracle Whip dressing instead of eggs and oil and stuff. 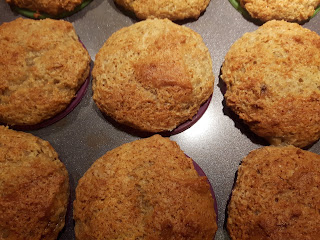 This week's recipe is the first banana recipe from my muffin book, and the first of two in the book involving Miracle Whip. 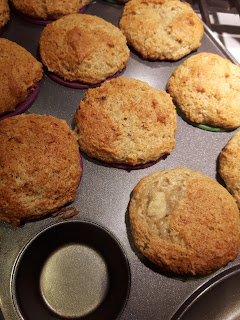 Very easy, just a few ingredients, no spices, no blueberries or nuts or chocolate chips. Mash up bananas with MW, add flour, soda, salt and sugar. Sort of like this.

They are okay, but not spectacular. A bit funny-textured, rubbery. I won't be switching to this for my favourite banana muffin recipe, but if one is stranded with only Miracle Whip and no eggs or oil, it's serviceable.

I took the remaining bran muffins out of the freezer the other day because we had people over for brunch, so I shall have to replace them with a few of these, because we still can't each eat a muffin a day. Mention was made today of my muffin "crusade," which I think is a bit much, really! Not even really an obsession....
Posted by Mary deB at 6:43 pm No comments:

Although it is Muffin Monday, I have no muffins for you. I still have some from previous weeks in the freezer. Who knows, maybe we'll have Muffin Thursday this week!

I am knitting away on my Thing-that-is-not-a-shawl. 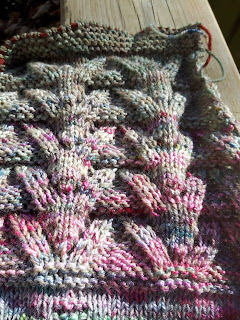 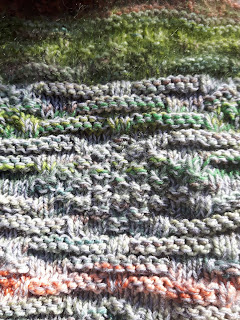 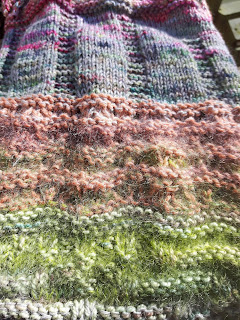 I have started the second side of the front, and am fussing more about colours. I don't have anything like that dark green in the original shawl, and that is sorta bugging me. 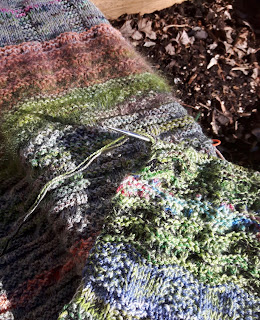 But we soldier on. Blues instead of the pinks of the right front, and a bit of rusty laceweight. I'm starting to wonder about the back, and change my mind about the sleeves, but it'll all work out!

My Black Panther wrap has definitely turned into a cardigan now.

I've been thinking mainly of this picture, with the two quite different sides. My right side is made of paler yarn, held together with a grey lace-weight yarn. 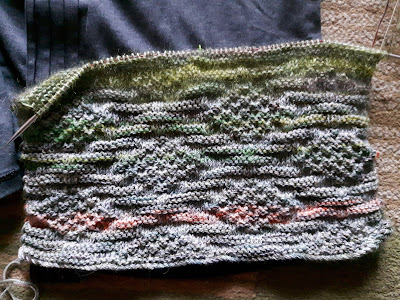 Along with the greens, I have some scraps of every crazy colour, and this side got the pinks. In the middle there, I used some goldy-brown leftovers, and for the lace yarn, some Kidsilk Haze, totally fuzzy and changing from chartreuse to plum! 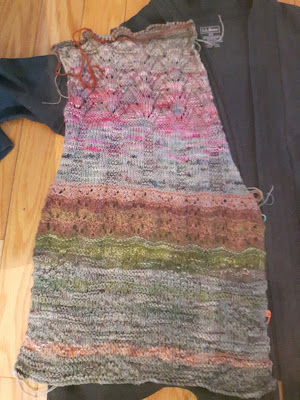 My phone has not been talking to my computer nicely, so I have to e-mail myself photos, which kind of cramps my style. Otherwise, of course, I would have a picture of every little colour change and a close-up of all the patterns. All in good time...
Posted by Mary deB at 9:14 am No comments: