We have had a month of summer holidays, and I have been ferrying kids here and there, getting them out of bed, making lunches... it's like school! Now the plan was for two weeks of hanging out and relaxing, but we seem to have got ourselves invited to visit friends in fun places, so next week we will be renting a car and packing stuff up and arranging spare clothes and sleeping bags... No rest for the wicked, as they say.

In preparation for the first of our little trips -- a quick sail on Georgian Bay with people who are planning on living aboard for a year while sailing in the Caribbean -- I made a sailboat dishcloth! 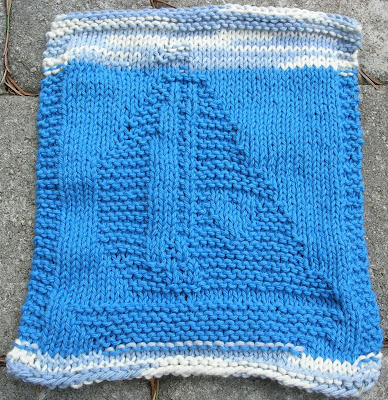 I knew I would be a bit short of the blue, so I made the waves foaming under the hull, and then had to put a few puffy white clouds in at the top. It hardly looks like I ran out of yarn at all... Well, yeah, a knitter might spot that trick.

Otherwise, I am almost finished the grey-footed sock. Of course, there is a bit of drama there, as I race to the toe with a very limited amount of yarn. I should have pictures for you any day now, and I hope the toes can both be grey!

August will be a month of car and plane knitting and so on. Here are my lofty goals:

1. finish the grey-footed socks (edited to add, a few hours later: I finished these! And it's still July!) 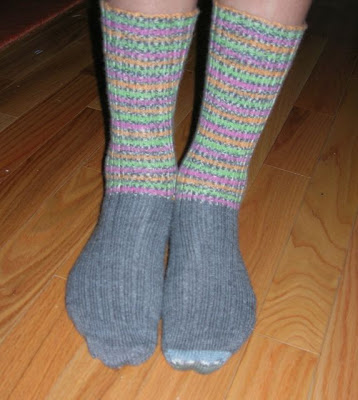 Here are the rest of the lofty goals:
Okay, that's enough!
Today's adventure should involve knitting, but we also are having a wee domestic crisis, because the washing machine may have packed it in. I hope to send the boys to the basement with a wrench while I sit upstairs with my knitting, but the whole family might just have to troop out to... wherever one goes to buy a washer!
Posted by Mary deB at 6:50 am 2 comments:

I made a few things

Since finishing the pink socks, I have made a list of all the things I have on the needles and got on a wee bit of a finishing spree. Though to be honest, one of the things I finished, I also had just started, and some of the things look like I will never finish them, and while planning what to knit on holiday a month from now, I sort of started something completely new....

It's a miracle anything gets done around here.

Okay. So. In August, I will see my nephew, who will be days away from his 40th birthday. Heck, he must have a dishrag! 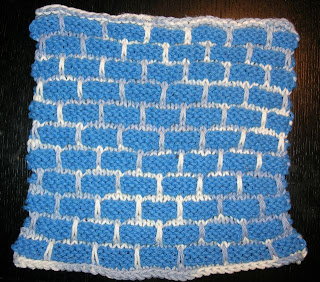 That, of course, made me look at my pile of dishcloth cotton and realise I could spend a couple of weeks casually making a stack of dishcloths. But wait, what's this over here... more Katia Jamaica yarn from the Acres of Mesh sweater! That would make one of those very cool blankets! (That's on Ravelry.) I can make that on my holiday! 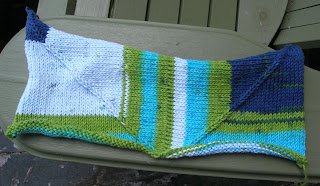 Oops, I thought I'd just try things out.

I am making no-sew miters and so far have 7 little squares. I figure my Jamaica will give me about 22. So I also rustled up leftovers from Basalt -- dark green DK cotton. I started thinking the blanket would be six by six little squares, but I think maybe five by five, or four by six. Kay made lovely diagrams in that tutorial, and I have done my best to make little diagrams too, though low-tech. On a shopping list. 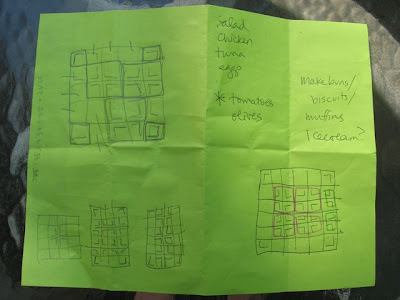 That's two new items! What happened to the desire to finish, to cross something off the list?

The hot pink cotton scarf was started, apparently, on May 6th (of this year!) and yesterday I made the last few rows of edging and it's done! I ran out of yarn 3 rows from the end -- but luckily I have another whole skein of this stuff. I think the original plan involved a much wider wrap, but somehow I got distracted. 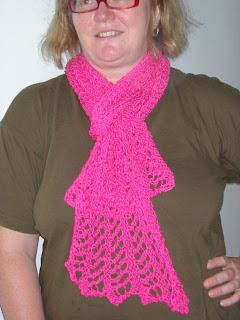 I didn't really pay too much attention to that edging pattern, and sometimes I have 3 ridges of garter stitch between eyelet rows, and sometimes 4. That makes it a bit hard to arrange the second end to match up with the first... and so they don't match. 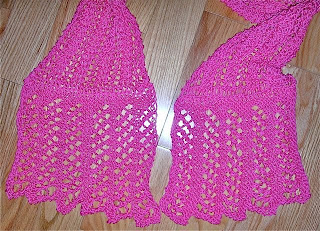 One end has five sets of eyelets, and the other has six. But you won't tell, will you?

After I wrapped it around my neck and had Arthur snap my picture, I did a quick blocking of the scarf, and it seems to have ended up about 8 feet long! Which is very long indeed.

Plans now include making more jazzy miters, and perhaps, just maybe, finishing the second grey-footed sock. I see that I started these one year ago, so it does seem like it's time. I also promised to have a blanket of DK wool strips done by September, so that should be in the lineup, too. But I did get a new Rowan magazine the other day, and so have several sweaters in my mental queue....
Posted by Mary deB at 7:36 am 2 comments:

I don't even know who David Foster Wallace is

I Write Like by Mémoires, Mac journal software. Analyze your writing!

Of course, I had to google him and read his Wikipedia page.

The really important kind of freedom involves attention, and awareness, and discipline, and effort, and being able truly to care about other people and to sacrifice for them, over and over, in myriad petty little unsexy ways, every day.... The only thing that's capital-T True is that you get to decide how you're going to try to see it. You get to consciously decide what has meaning and what doesn't.... The trick is keeping the truth up-front in daily consciousness.

So, yeah, I totally see the comparison. He loved endnotes, too, but I haven't figured them out in Blogger... I wonder if he used lots of ellipses....
Posted by Mary deB at 7:29 pm 1 comment: 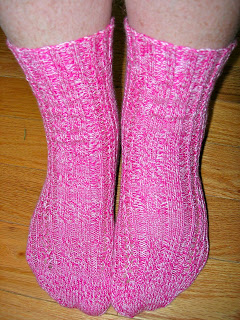 My mom's birthday socks are done! And I still do not have to panic about mailing them. I'll saunter down to the post office tomorrow and they'll get there in plenty of time. I will see her later in the summer, but figure the birthday present should get there for the actual birthday.

And now, what? I could finish the second grey-footed sock. I could finish the pink cotton scarf, which is not quite that alarmingly pink! I could do any number of things... Luckily Stephen is away this week, so I can spread yarn and UFOs all over his side of the bed to study at my leisure.

Thank you for all your concern about my poor foot! It is fortunate that the foot doesn't contain any vital organs or, in fact, much except bones. No lasting damage seems to have been done and I'm not limping (too much).
Posted by Mary deB at 6:52 pm 1 comment:

This is part of what happens when you leave your knitting on the floor: 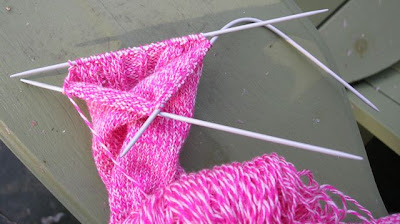 That hurt.
After one steps on a 2.75 mm pointy stick in bare feet, here's what happens next.
That's it for this evening, folks. I hope we won't have any more of these emergency blogging situations. Also, I hope there's another sock needle somewhere around.

I must say I have renewed sympathy for Jane, who stepped on a plug, and Ryan, who stepped on a wooden needle, though since she only complained about breaking the needle and not her skin, I would assume she was wearing shoes! This stepping-on business has got to stop!

Right now I am going to find a comfy chair, complete with footstool, and read the book I finally got from the library. It's The Crossing Places, by Elly Griffiths, recommended by Liz.
Posted by Mary deB at 7:17 pm 5 comments:

Socks and a leaf

Long ago, I started these socks. 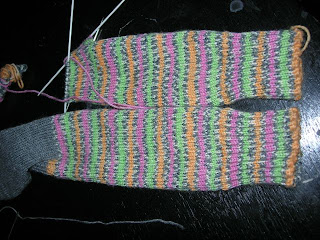 And then they got set aside for ages! The other day I realized I had four pairs of socks on the needles, which means that I am presently committed to making eight socks! Luckily one of these was pretty darn close to completion, so I took a break in between the pink socks and raced down to the toe here! Yay me. 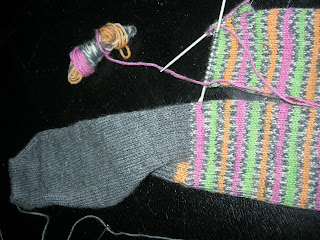 So, now, having finished one pink one and one grey-toe one I only have six more socks to do. Holy crow... 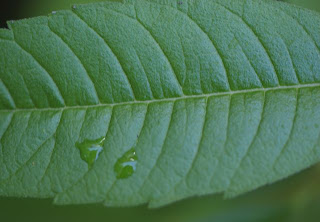 The golden age of intarsia

The other day I was going past my crazy catlady neighbour's house. She had a dozen boxes out on the sidewalk, filled higgledy-piggledy with books to get rid of. Many of them were in Russian. But then, my eagle eye spied the words "Kaffe Fassett" peaking out from under something in Cyrillic script. 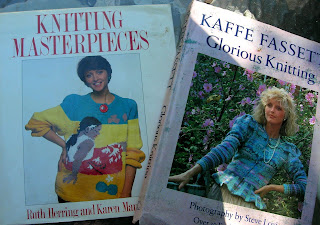 I scrounged around a bit more after that, and came up with a couple of those crafty needlepoint books filled with patterns to gussy up your glasses cases, or make "coasters" with tent stitch, and Knitting Masterpieces! (Here's a link on Ravelry -- people have indeed made these sweaters!)

While I like to think of Glorious Knitting as timeless, it is from the mid-80s, the golden age of intarsia and big hair. Knitting Masterpieces is from 1987, and while the hair is a bit toned-down, the intarsia is aaaalllllllll here! 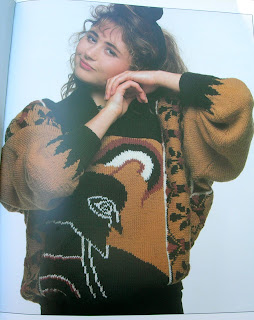 The book tells me this is Achilles from this pot by Exekias. I prefer this pot, with Achilles and Ajax playing chess/draughts/backgammon. (I really, really love that pot!) Whatever, I would love to make Achilles onto something, like a baby blanket! I guess a cushion would do?? 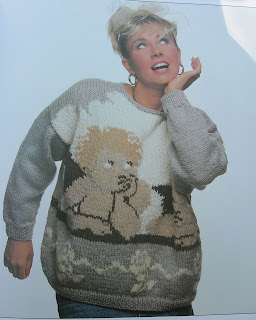 This one: At least he doesn't have big hair. 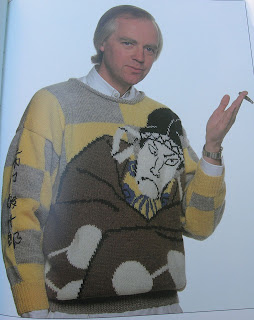 And this, perhaps my favourite: 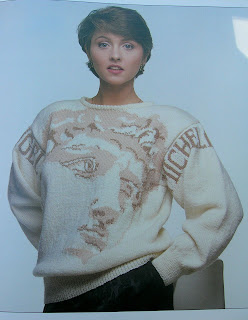 Maybe another cushion for the couch. Achilles on one side, David on the other?
Posted by Mary deB at 9:14 am 4 comments:

What a way to end a year

Today is the last day of the 4th year of this blog! Tomorrow is my blogiversary! Who'd have thought I would still be doing this 5 years down the road? 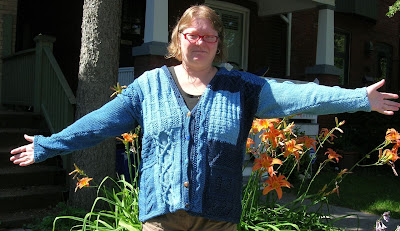 To celebrate -- no, actually just by chance -- I have a finished garment to show you. I started this sweater almost 2 years ago, and it sat around for months recently, just waiting for a seam or two and some buttons. 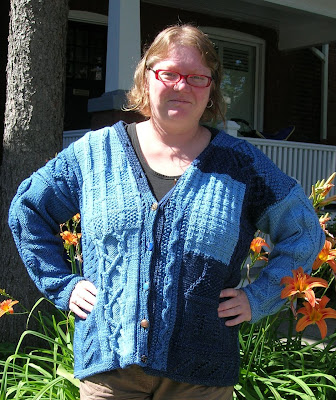 It fits fine, but the weather, in the 30s Celsius, is just too hot for a heavy cotton cardigan. Now it must sit around a few more months, but come October I think I will get a lot of use of it.

Stephen said, It's all different colours! And then he said, And all sorts of different patterns! But he didn't seem to notice the buttons. 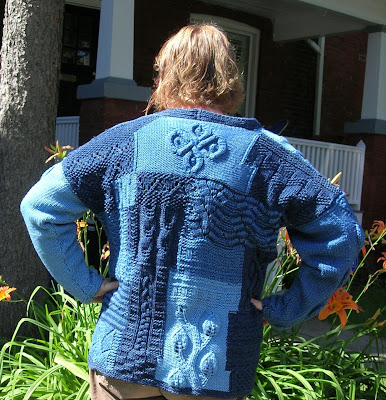 Now, on with the socks and rest of the WIP pile! 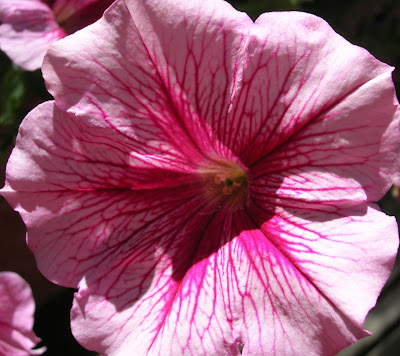