Some wool for you 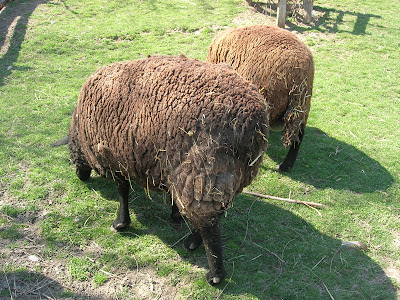 I'm in a bit of a knitting slump, it seems, so I can only show you wool on the hoof, at Riverdale Farm.
Posted by Mary deB at 7:41 am 1 comment:

Eye Candy Friday is back

I haven't had any Eye Candy pictures for a while but yesterday, the sun came out! Whoo hoo. So I took the camera out to the back deck, and took a few pictures. 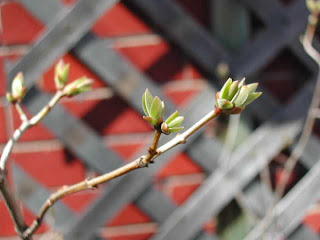 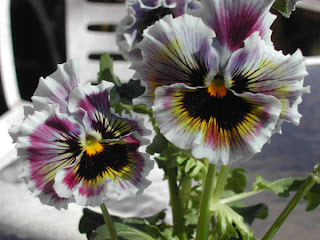 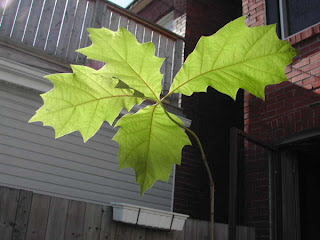 The mighty oak. Did I ever tell you the story of this tree? Someone left it in a little pot (it was probably not a foot tall) at the curb, and I rescued it and brought it home. There was a note with it: it was originally given at a wedding, as a little gift from the couple to their guests. I wonder how many of them ended up discarded because no one has room for an oak tree! It's in a pot, but I will have to think of somewhere to set it free before it gets too big. I would love a mighty oak on our street, but will have to find a neighbour to take it, since I already have a big tree. It's got a bit of a bend at the top because I took it inside over the winter and put it on shelves in the bathroom window, and it grew several inches and put out those 4 leaves without me even noticing, and it was scrunched under the shelf! Oops.

And then there's Elaine reading. The magazine is upside-down because I think she was reading the answer to a joke or some such! 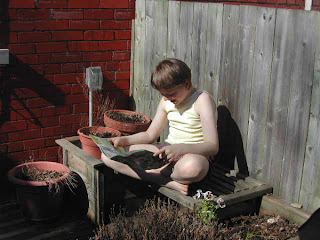 And Arthur, surrounded by the "garden," one store-bought pansy and a lot of dirt. The nice weather is supposed to continue, so there'll be a rush at the garden centre this weekend, but we all know in our hearts we can't plant anything till Victoria Day. We'll see!
Posted by Mary deB at 7:24 am No comments:

Blog Against Disablism, May 1

Last year, I stumbled across Blogging Against Disablism, probably via Emma's blog. I followed a few links and found a huge variety of blogs, some very interesting stories and lots and lots to think about. I encourage you all to see what people have to say, May 1. We are lucky in this family, so far, touch wood...
Posted by Mary deB at 7:03 am 1 comment: 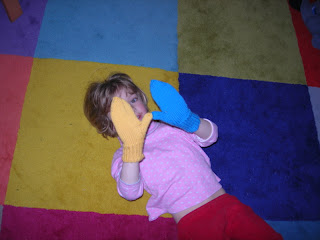 Elaine had been wearing big puffy waterproof mittens, but now that it's spring (ha!) she needed smaller, less snowball-fight-worthy mitts, and these knit up in a day or two.

They match not only the carpet, but also her bike helmet, so all is well.

I mean to make myself some more dainty mitts some day soon, but as you may know, my list of things to knit right now is already rather longer than I would like.

I think I've dealt with the wool-eating critters, by putting all the wool out of their reach in my freezer. I'm washing sweaters, vacuuming carpets, bagging closet stuff... I must go vacuum the stairs now, but I'll report more on the knitting front soooooon!
Posted by Mary deB at 9:48 am No comments:

I was walking home last night, happy as a clam, thinking that I should just finish up my started-long-ago blanket of squares, because I have in mind another blanket of squares I want to make. The one in progress looks like this: 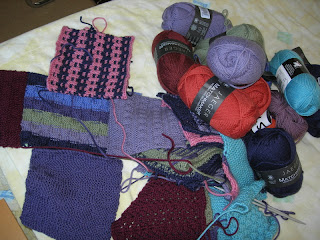 except that it now has about 45 squares, I think, out of possibly 63 or 70, and the one I want to make might end up looking like this: 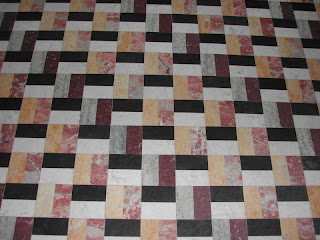 That's the floor of the Louvre! Six colours of Felted Tweed, parquet squares, ooooooh! (Actually, look at this! All the squares of the Learn to Knit Afghan! Great job!)

So, I look at my pile of yarn and squares, left hopefully out of the closet, in full view (sort of, until it got covered up with other projects, sweaters, dirty laundry...). I lay out the squares, admire my handiwork, pick up the balls of yarn, arrange by colour... and spy a.... a bug! Actually, some sort of tiny caterpillar-like thing. About half a centimeter long, with huge fangs. Well, I don't know about the fangs, but it had left a little chewed trail in the turquoise yarn. Luckily, I don't care much for the turquoise, but still! Again, luckily, we don't have much food in the freezer, so I put the whole blanket project, my stash of Felted Tweed, the half-made Sweater that Makes Me Sneeze and accompanying wool into deep freeze! And I'll see what else I can jam in there, too!

Now, where did I leave that vacuum cleaner?
Posted by Mary deB at 8:53 am 2 comments:

Back to my usual sedate life

My ears have stopped ringing from the excitement of last week, so let's get back to a few knitting things. 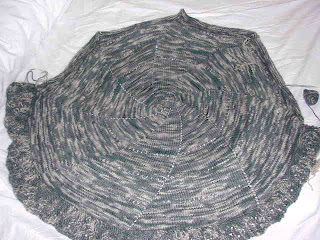 Thing 1. The Thundercloud blanket needs help. Like a new ball of wool! I didn't include the clause about running out of yarn in my original Knit from Stash rules, but since they're my rules, I hereby declare that I can/must go buy another skein. Heaven knows the dyelot situation is dicey anyways with this sort of yarn, so we'll just hope it looks similar enough. This will require another trip to Alterknit, which is always fun. That's part A of this problem. Part B is, do I need two balls? I'm only half-way round, and not even exactly half-way, and I think I will need one full ball and a few meters. Have I been in this situation before, or what? I guess I have to buy two. A blanket with matching wrist-warmers, perhaps? 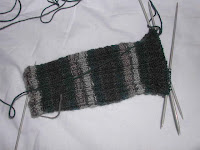 Thing 2. The sock, the sock. I sure hope the dissertation is going better than the sock.

Since I end up peering over my glasses at this, I prefer to work on it (or not) in the privacy of my own home, which leads us to the portable bus project, Thing 3. 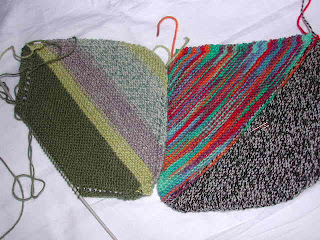 Thing 3. I seem to have started a new long-term project. I've made a couple of squares of leftover sock yarn. Of course, nothing matches, but I assume the total jumble will be riotously colourful and appealing when I'm done. At least it will keep someone warm....

Thing 4. Not knitting related, but thrilling for all those of you in Oxford or Cambridge: the big Boat Race is this coming weekend! Must find ye olde pub in which to watch it! 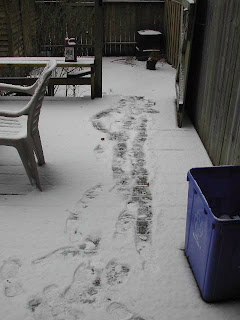 Okay, the grocery store will be closed for 2 of the next 3 days, so I must run out and get a few essentials, like food...
Posted by Mary deB at 7:16 am 1 comment: 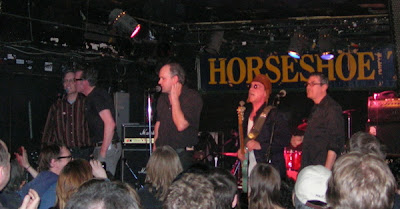 Friday night Stephen and I went to the Horseshoe Tavern ("where Stompin' Tom and ... uh... lotsa other people have played") to relive our youth and hear the Pointed Sticks, legendary Vancouver shoulda-been-pop-star-punk-cheesy-organ band -- the reunited Pointed Sticks, who, amazingly enough, are the original guys, more or less. The Sticks we knew had Dimwit (Ken Montgomery, RIP) on drums, but Ian Tiles, who played Friday, had also played with them in the old days (and had a marvellous f-band called Buddy Selfish and the Saviours, whose version of Twenty Flight Rock was super-fantastico, not to mention the boots he used to wear were divine. I heart Buddy Selfish)! It was a tad weird to be watching this show, with all the songs we loved when in our early 20s, but it was obviously a bit weird to be singing them, too! There were tongue-in-cheek comments like, "This is a fast one. Now, you can have a mosh pit if you like, as long as no-one gets hurt. We're all responsible parents now!"

We met a couple of friends (Alison and Alison's friend Alison) at the club, who used to see them in Edmonton, and they came and joined us at our table before the show started. "Are you knitting??" they say. Yes, on pointy, straight, 3 mm aluminum needles, but really, I stayed away from the mosh pit. Actually, since most of the audience were responsible parents, too, like us, there really was no mosh pit. No, I don't have a picture of my pointy sticks with the Pointed Sticks. And I only knitted in between sets!

I found our old slides, so let's have a few before and after shots. 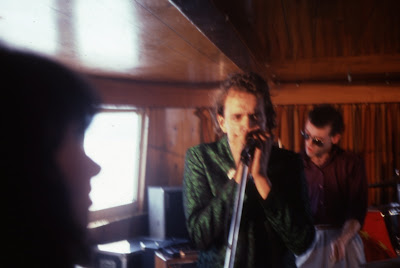 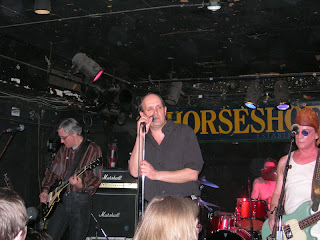 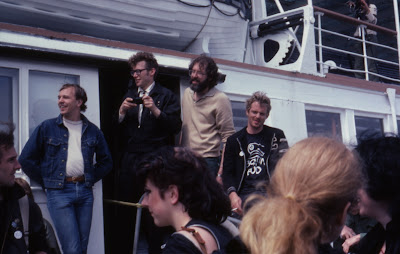 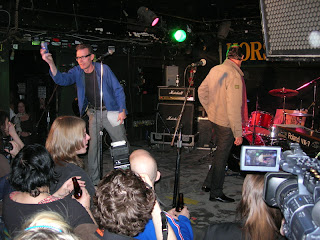 And here's the back of the Boating with Bud T-shirt, white version: 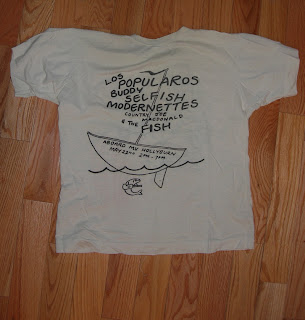 I think Nick Jones was at this point fooling around with Country Joe McDonald and the Fish, since the Pointed Sticks had broken up. Keeping track of those guys is not easy, since they all knew each other and had these crazy mix-and-match bands.

So, history aside, it was a great show! They were clearly having a good time, and we had a great time, too. They are going to be making 7-inch 45s -- yes, vinyl -- so we'll be keeping our eyes out for those!
Posted by Mary deB at 9:32 am 1 comment: