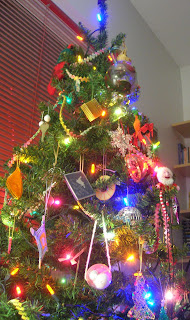 This was our tree. Same old plastic tree we have had for years, and, as ever, we said we must get a bigger one because our ornaments collection keeps getting bigger. I think you can see a souvenir of Newfoundland, an old heat sink from a computer, kid-crafted items of all shapes and sizes, a bit of plastic from a broken bike reflector... The usual assortment at our place!

We had a fine Christmas morning, with goodies all around. Next year just might be the year of cooking, instead of the year of lace or the year of socks. I got a new Jamie Oliver book and the kids and I decided Stephen needed a book about Asian dumplings and a bamboo steamer! Everything sounds so yummy!

We spent Boxing Day lolling around, and then got in a rental car and went for a little trip: 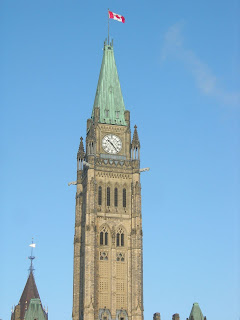 Destination: Ottawa. Not quite the Caribbean, but Mommy didn't have to cook! We stayed in a hotel where we actually had plenty of room and a little kitchen so we could keep milk and make toast and coffee for breakfast. We just spent a couple of days there, going to museums (Civilization, and then Nature for the girls and Aviation for the boys) and visiting friends and relations. 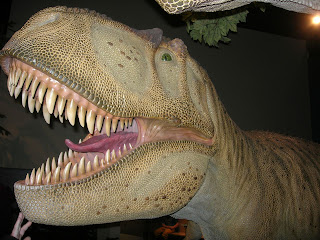 This is, of course, a real Tyrannosaurus Rex, about to chomp the hand of some unsuspecting child. Actually, it's a model in the Nature museum ... It was fun to see the "flesh and blood" dinosaurs along with the skeletons. This T Rex had been in a little skirmish and our 8-year-old tour guide, a friend's daughter, happily showed us the wounds on its flank!

A ceiling at the Civilization Museum! My kind of colour wheel! 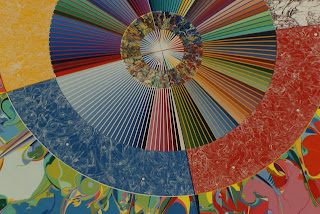 My uncle showed Arthur and Stephen the Aviation Museum, complete with Lancaster bomber from WWII. 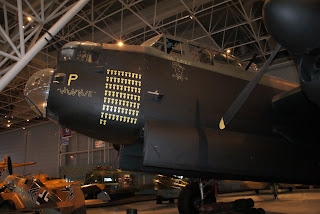 Some gates on Parliament Hill, 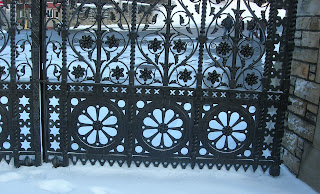 and a stone pillar, covered in a thin layer of ice. Luckily we missed the freezing rain by a day or two! 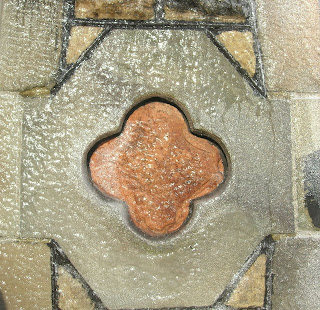 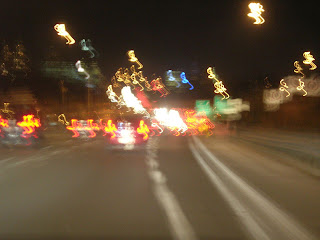 The ride home. I was bored; Stephen was driving. I had taken some yarn and needles for the ride, but found that I needed smaller needles. Aha, a good excuse to go to a yarn shop on the way to a museum... But when I got back in the passenger seat with nothing to do, I was sick of the yarn and had no ideas about what I wanted to do with it! Perhaps another day I'll show you the doodle I knitted...

Tonight, who knows? Nothing very exciting will happen, and tomorrow it will be 2010! There will be knitting Olympics, and I am chuffed about that -- more later!
Posted by Mary deB at 3:57 pm 6 comments: 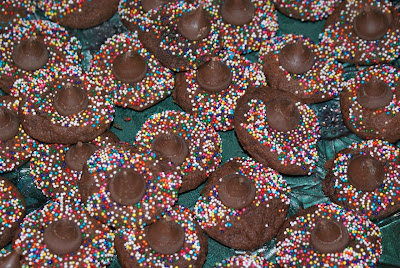 Chocolate cookie dough, rolled in sprinkles, with a Hershey's kiss jammed into each cookie when they are hot out of the oven. The kiss melts a bit and glues itself to the cookie. They are a bit decadent!

And now I am off to the store for some real food.

If I don't manage to make it back to blogland over the next few days, I wish you all health and happiness and good eats!
Posted by Mary deB at 12:53 pm 5 comments:

This is an ad, but so funny 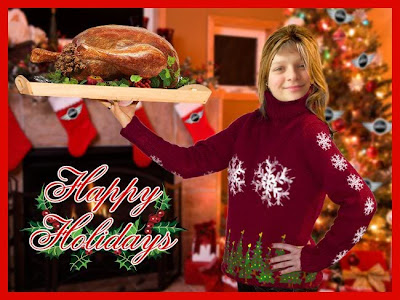 Folks, lovers of fine knitwear, you have to go here, to see how our knitted creations are appreciated... It's an ad for Mini Coopers, but, really, it's a love letter to the holiday intarsia masterpieces of days gone by.

I hope Arthur doesn't mind lending his face for this project...
Posted by Mary deB at 5:21 am 1 comment: 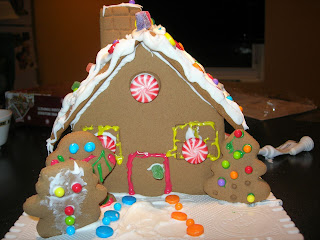 I'm pleased to present this year's gingerbread house. We make one every year -- that is to say, we buy the prefab house and icing at the grocery store and put it all together -- but I do not have a whole series of pictures for you. Hmm, they have not been blogworthy in the past??

Here is one previous attempt. We've perhaps become less crazy with the icing over the years.

There will be knitting news one of these days -- I just need a moment to sit down and sort myself out. Maybe in a week or two!
Posted by Mary deB at 9:06 am 2 comments:

Another side of winter

Ah, we have the Christmas cookies, the beautiful amaryllis... and the snow. Toronto went without snow till now -- we had the first snowless November in recorded history. So, it's giving it a try now, but with temperatures going up to +4 today, it'll just be a miserable slushy day.

Our back porch after Stephen and Elaine left for school. 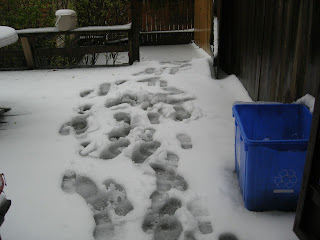 There's rather a lot of prints, because you have to go part way, then remember you need shoes for when you're inside at school, turn around, tramp back into the house, then out again. Ick. 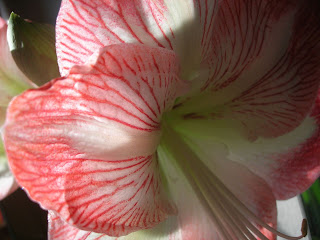 But, the amaryllis is just peacefully growing and flourishing. 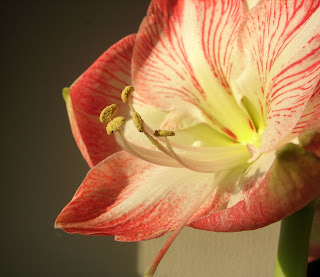 I wonder what kind of creature it needs to pollinate it. Look at that inviting display!
Posted by Mary deB at 8:40 am 2 comments: 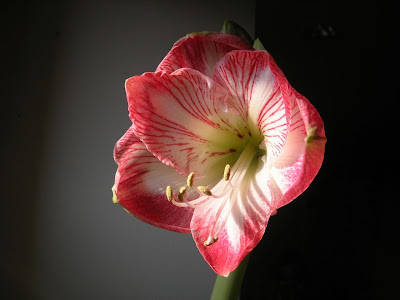 One thing I like about the Christmas season is the amaryllis! We put lights on the house and we put up a tree a week or two before the 25th, but we don't go all out with decorations around the house. I have never really got on with poinsettias -- messy once they start to go, and for me, impossible to revive after the initial colourful display. But an amaryllis is a marvel! You buy a box with a pot, a gigantic bulb and a puck of dehydrated growing medium, and a few weeks later you get this great big fantastic looking flower! With the promise of more to come! 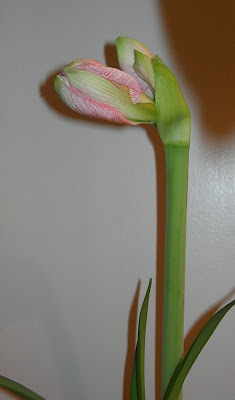 This is what my amaryllis looked like on Thursday. 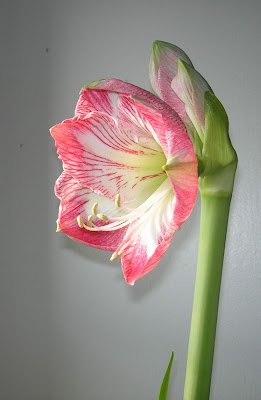 And this is what it looked like Friday morning.
Who knows what tomorrow will bring?
Posted by Mary deB at 8:01 pm 3 comments: 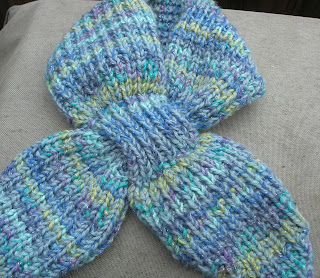 Done!
Since I had a few wee rows to do, it's not a big surprise. 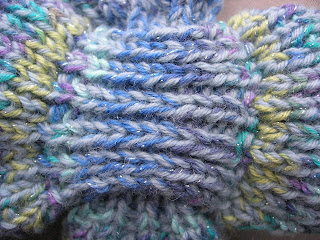 The "knot" where one end goes through a casing at the other end. 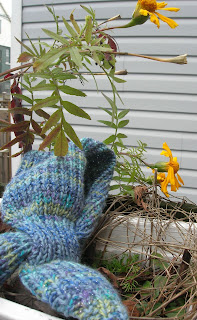 The scarf resting among the last crazy marigolds. 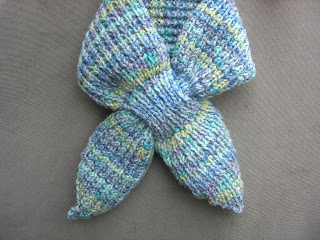 Now I can return to the denim cardigan and polish that off.
Posted by Mary deB at 12:32 pm 2 comments:

What's going to happen in December

I wrote goals for November, but I think I didn't post them! I'll tell you now what they were:
So. I have sort of finished the denim cardigan. The body went into the wash yesterday, so it just needs sewing up. If I make that a December goal, I'll almost certainly meet it!

The others, no... Although I really want to start something new, I will put November's 2 and 3 as December's 2 and 3, after the cardi.

Oh, and in the middle of all this, I seem to have started something different! I was in the new Anthropologie store in town and saw some cute little scarves -- you know, the kind people's grandmothers knit for them in the 1960s, little bow-tie like things. I found this pattern on Ravelry. 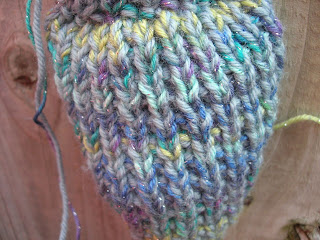 It's clearly for another year's Anthropologie scarf, because this year they are garter stitch with a simple cable and bobble pattern going up the middle! However, I liked the texture of this one and am making one for Elaine, using a ball of Rowan 4-ply wool that was this year's "free gift" when I subscribed to the magazines, held together with some sparkly sock yarn I picked up recently. 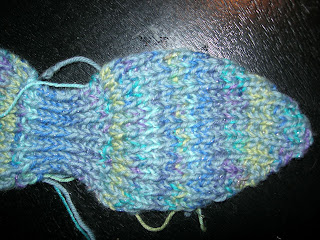 The sparkles make it look like it's just dusted with snow! I think I have the colour called Acai. It looks better in real life -- neither the flash nor the dull morning light show it to advantage.

Shortly, though, we will have a completed scarf, which might even get modeled if I ask nicely. Stay tuned -- you might get 2 finished objects before you know it!
Posted by Mary deB at 6:37 am 3 comments: