I am a medalist

Last Sunday I walked a half-marathon, and lived to tell the tale.

Way back in April, I was looking for a holiday idea, something halfway between "arrive at the train station and turn right, trying to find a bed for the night" and the "if this is Tuesday, it must be Belgium" bus tour. Somehow I came across these tours where you walk somewhere interesting, and a tour company carries your baggage from quaint B&B to quaint B&B. So I told my sister and my cousin, and then everyone I ran into, and now seven of us are going to walk across Hadrian's Wall next May.

As we discussed it further, we pared back the distance we are walking. The city of Newcastle is sort of in the way, so we are starting west of that, and we are ending in Carlisle, instead of going out to the sea at Bowness on Solway. So, we don't need to walk a half-marathon a day; I think our longest day is 18 kilometres.

But I had paid my money and was committed to this walk! Here we go!


You can't see behind me, but there was a sign on the corner that told the time and the temperature, so I know it was 1°C as we were getting ready.


That green jacket has probably been abandoned by someone. People come in their warm clothes, and shed them as they take off. Volunteers collect tons of sweaters, hats and especially mitts that get tossed to the side as the race goes on, and donate them to charity.

For the starting line, the runners get into different "corrals" depending on their speed. The people with red tabs on their bibs are off and running twenty minutes before us orange-tabbed walkers get to the start line. Here we are, the orange corral, ready to go. 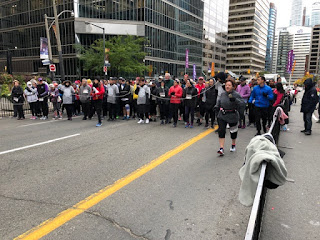 There was a shower of orange confetti as the orange corral started, and off we went. I was very soon passed by a blind power walker and her guide, and by an old geezer with a walker! But I managed to keep pace with people who seemed to know what they were doing, although I lost minutes stopping in a porta-potty along the way.

This is the only time I took my phone out of my backpack to take a picture. Those people in the opposite lane are running, and if they do the whole 42.2 km, I might beat them to finish line. This is as we are approaching the exhibition grounds, about kilometre 6 or 7, I guess. We walked west maybe another 4 km and then turned around into that other lane. 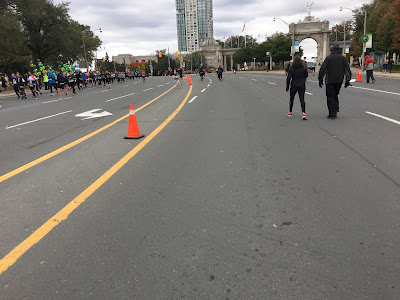 There were photographers along the route, and I know a couple of them took my picture, but my bib number was off to one side and so it's hard to find a picture of me. I looked at the millions of pictures taken by the official photographers of people in red... couldn't find any of me! Oh well, I did cross the finish line.

The last 500 metres or so are up Bay Street, going straight towards the Old City Hall with its big clock tower. I knew that we had started at 9:10, and a half-marathon is "supposed" to take 3.5 hours. The big clock said 12:35, so I had to get to the finish line in 5 minutes. I did boot it those last couple of blocks! And got in with seconds to spare, at 3:29:14.9, officially! 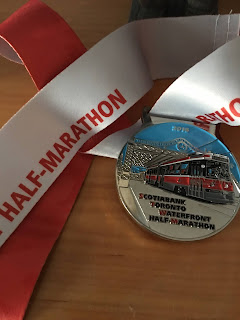 Funnily (yes, ha ha) I got blisters on my feet. I hadn't got any in my practice walks, so I guess it was just my lightning speed that caused them. I shall see what I can do about that in future. I'm going to need sturdier shoes than these for the big walk and I'll have to get them well in advance and break them in thoroughly.

It was cold! I had little mittens, which I took off once, but put on again once I got to the lakeshore where the icy wind was blowing! I could have used warmer pants. But, my idea of knitting a nice wool sweater to walk in might be wrong-headed. I just don't know. We won't be going fast; we'll be stopping for lunch and to take pictures and to gaze on fields of wildflowers and frolicking sheep. But it will be May and I hope warmer than one degree. I am not sure I learned anything useful about what to wear!

I learned about something called runner's trots. I did, on some practice walks, have to duck into a coffee shop or public library to use the washroom. Following advice gleaned from the ever-reliable internet, I ate white bread and jam for a couple of days, did not have a nice bowl of oatmeal and raisins before the race, stayed away from fibre and coffee, and had an uneventful walk. Phew. Again, I'm not sure this will be an issue for us as we stroll calmly along our route, but it's something to keep in mind as we chow down on our full English breakfasts!

This was the last of the season's marathons, and things start up again in early May, a couple of weeks before we leave for our big walk. Another "free" T-shirt with my $100 entrance fee... it's possible!
Posted by Mary deB at 2:05 pm 3 comments:

The other day I went to High Park. I was meeting a friend in a subway station and had some time to kill, and noticed a bank of three pay phones. Not a sight you see every day. 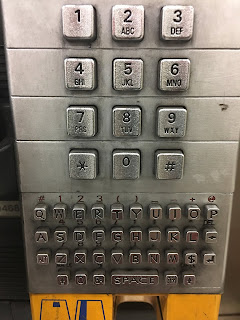 Nowadays, apparently, a pay phone has an alpha keyboard so you can ... text? Interesting.

At the park there are pretty leaves on some of the trees, and woods to walk one's dog, and a little thing they call a zoo, which probably has about a dozen kinds of animals. Here is an emu. 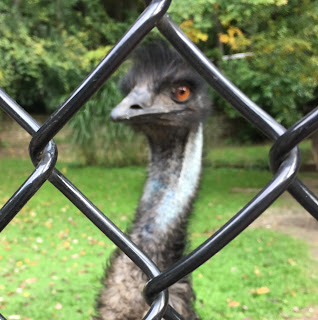 And here is a llama. Funny, I assume it's a female, but really don't know. Those eyes! 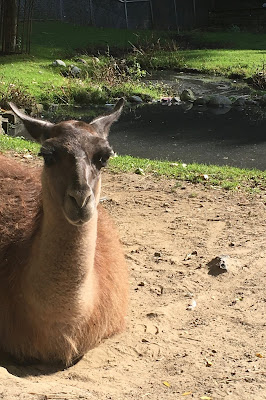 On the way home I passed this back fence. All my favourite colours! 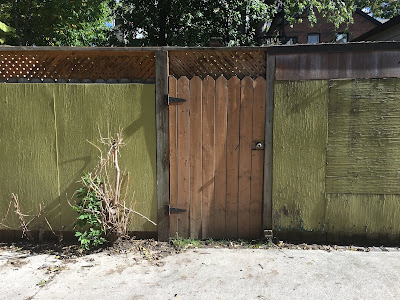 Speaking of colours, I am knitting Stephen West's mystery knitalong, and this is my gloomy, murky effort so far. I'm not sure I like it, and I'm not having super fun doing Latvian braids. I do love a good short-row squiggle, though, so I soldier on. 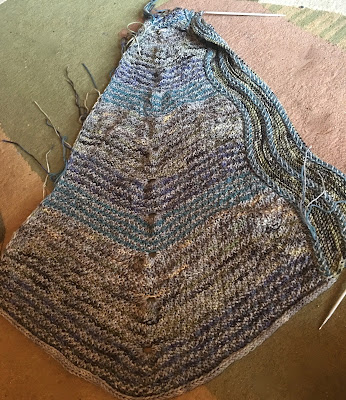 I always think of taking pictures of knitting when it is dark out, and this morning it is raining, so you get an indoor picture. I hope that some day before next June I can take pictures outdoors!
Posted by Mary deB at 10:34 am No comments:

Stephen West is doing another mystery knitalong. This shawl is called Texture Time, so I am hopeful that we will do lots of different stitches.

We repeat the same rows over and over again. Some contain increases and some have decreases. 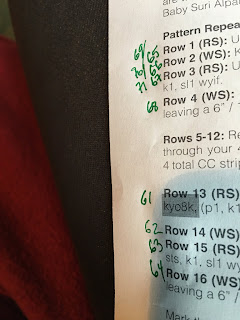 So far, it looks like a paddle blade more than a shawl, but it's kinda fun! 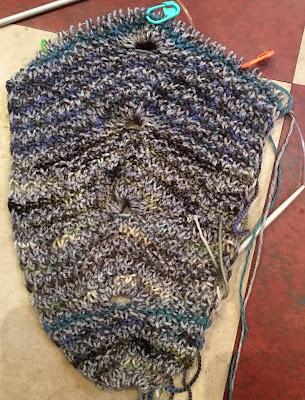 Muddy, swirly, gloomy. I do hope I get to make a big patch of the bright blue!