In September of 2007 I posted this; I had signed up to be on this newfangled Ravelry thing. And 10 years ago today, I finally got in. I was the 26,810th person in through those beta gates.

I was away for a week, but now I am back and will show you my latest accomplishment. I needed something that didn't need sleeves like Elaine's sweater, and would go with some speed, unlike that shawl on 3.25 mm needles! So I started Esjan with some green cotton boucle that a friend had given me a year or so ago. I think she started to make a sweater but gave up on the whole project.

I knit a ton of garter stitch, increasing across the row once in a while to make a semi-circle shape. After a while, one is instructed to make these big holes, like 5 yarnovers at once, increased to 9 stitches! Totally disguised while on the needles, as it looks just like a big lump. When it comes off the needles, it's a big crazy, holey, pointy, semi-circular shawl. 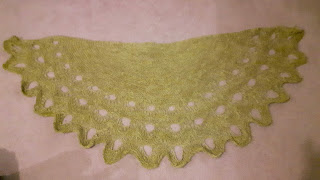 I have to wash it and block it a bit to neaten things up. 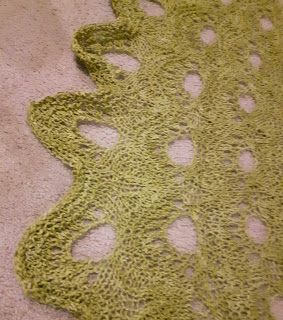 Green garter stitch as far as the eye can see... 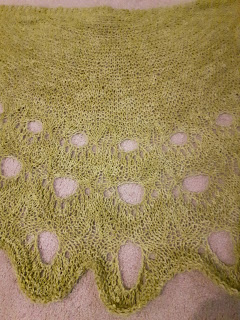 Now to do some laundry, sort out the house a bit and settle back in.

A bit of knitting catch up

When I was standing in line at TIFF, I started a sweater for Elaine. It is from a pattern for Rowan Denim, which means two things: the pattern says knit four flat pieces and sew them together, and it says to knit the pieces 10 or 15% longer than you want them to be, then wash them in hot water to shrink to the correct size.

I am not knitting in Rowan Denim, and I want to knit the body in the round. So now, finally, I have this, after realizing that I don't need to knit it quite as long as the pattern says: 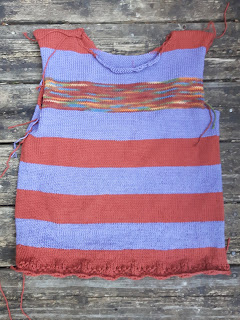 The next step is sleeves, of course. I just haven't had time to sit down and figure that out, because I want to pick the sleeves up at the top and knit down, and it seems the numbers in the pattern are for a very wide sleeve. I wonder why I even needed the pattern...

Soon this project got too big to knit in line; the knitting sagged off the needles as I stood there. Must start something small!

I rummaged around in the stash and came up with some leftovers, years old. (I made this for wee Elaine in 2008.) I ended up with a cowl-thing, that looks like it could be a little girl's skirt! 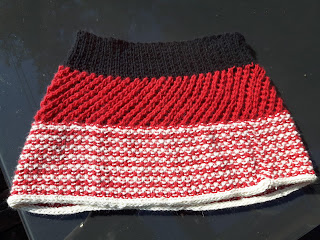 But it's a cowl, really. The wide part covers your shoulders nicely. 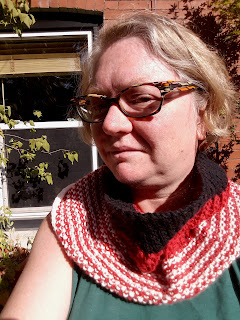 Or gets pulled up over your head! 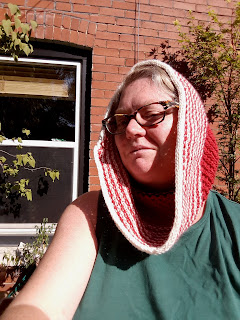 It kept me amused and might end up being useful to someone!

Back to the sweater... but no, it became way too hot in September to knit with a lump of half-finished sweater in one's lap! Must start something small and light.

I took these two jazzy balls of sock yarn... 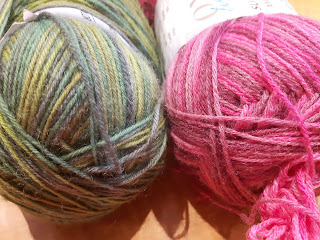 And turned them into this sort of muddy triangle, which will one day become a shawl. 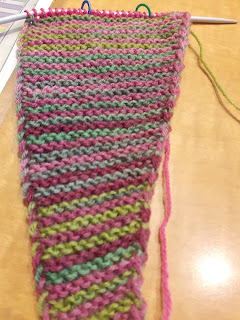 It's Vertices Unite, one of my fave Stephen West patterns. It's a bit bigger than that now, but my oh my, a shawl on 3.25 mm needles, what was I thinking? I have to get this piece to be 90 stitches wide before I do anything different, and I increase one stitch every four rows... I think I have 50 or 60 now, but of course one does get bored with the slow movement.

So, those are some of my works in progress. I need to get a photo or two of my latest attempt!
Posted by Mary deB at 8:50 am No comments: