I think I am done 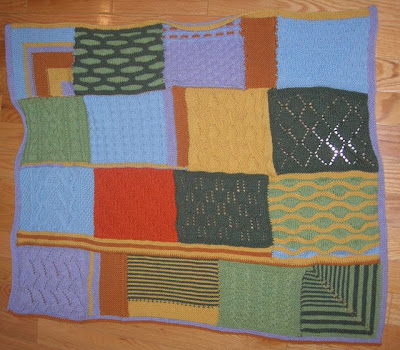 I have sewn everything up and put a little edging around the whole thing. I may yet take the last bit of orangey-brown and crochet more edge, to stop the curling here and there.

I must say that I am not too happy with these squares. I don't mind a bit of unevenness and tend to embrace the crazy in blanket design, but this really doesn't turn my crank. The colours were not all chosen at once, but there are too few of them to mismatch properly, if you know what I mean.

The yarn is superwash, so I will toss it in the washer and see how it all turns out. If those flippy bits don't learn to behave, more action will be taken. Perhaps.
Posted by Mary deB at 2:46 pm 4 comments: 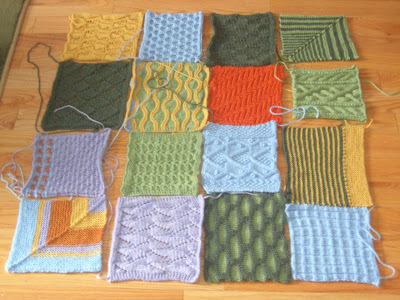 Sixteen squares are knitted up and blocked. They are clearly not all the same size, so some garter-stitch bits are being inserted here and there.

It'll be done this week, I figure.  I have only a bit of the yellow, quite a bit of lilac and almost a whole ball of the browny-orange that you see in the closer mitered corner. I might cave and buy another ball of something for the outer edge. We shall see.

I now have a baby to give this to. A colleague of Stephen's just had a baby who had some initial difficulties and scared the pants off all of us, but who seems to be improving now. One forgets just how risky this baby-having lark is. Suddenly, a tiny thing happens that turns out to be incredibly difficult and dangerous.

Anyways, enough about that! I'm sure that a knitted blanket won't help the physical well-being of the baby, but it might give a teeny boost to the parents who have been through such emotional ups and downs. At least, that is what we knitters like to think.

Wild things we found long ago

Once upon a time, in 2002, we faced the choice that so many young(ish) homeowners face. Renovate or move... Our house was built in 1911 and probably had 4 bedrooms as well as a "second parlour." Someone came along in the late 1970s and took all the interior walls out, making a giant master bedroom on the top floor, and a giant bathroom and two sort of bedrooms -- separated by the staircase but with no walls around them -- on the second floor. The people we bought the house from had two small children and a live-in nanny, who slept behind a huge and wonderful curtain -- they obviously had chosen the move option!

We now had two little kids and the prospect of rooms with walls was very appealing. So, we got some guys to come and move stairs, redo the kitchen, make walls, take the roof off and put it back on again, slightly different... It was madness.

But! At one point we took down the wallboard above the living room fireplace. The previous, minimalist owners had built the wall straight up, and we wanted a mantlepiece.

And we found this: 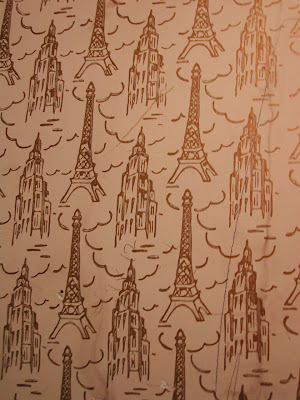 It's clearly the Eiffel Tower and something we call the Empire State Building, but I suppose it is just a generic skyscraper. 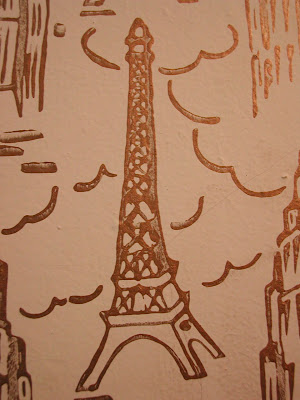 It is not really wallpaper. The paint is rolled right onto the wall somehow. You can see here the plaster and the image are cracked together. 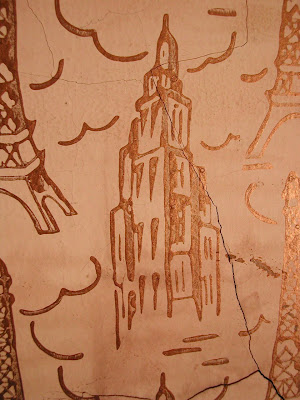 It was very intriguing and we wished we could save it, but there were problems beyond a few cracks: 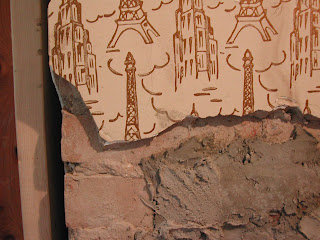 We covered it up again, and it sits there hidden behind our present wall.

I don't know if this was original to the house. The Eiffel Tower was built in 1889. Early skyscrapers that kind of look like this are the Royal Liver Building in Liverpool; and the Woolworth Building in New York, built in 1913. I would bet, though, that it is from the 20s or 30s.

This past weekend I went to the Toronto Archives and found out that the first person to live in the house was a Mrs Agnes McIvor, in 1911. Much more research can be done in microfilms of assessment rolls and city directories. We found a few names scribbled on hidden walls during the renovation, too, and we'd like to see if we might match up previous owners with those names. It's kind of like genealogy for your house.

One day, if you're lucky, I'll scan an old photo of the wallpaper we found under the kitchen sink in our very first apartment. It had scenes of St Basil's Church in Red Square on it. Maybe there's a trend here and we should look into some modern architectural wallpaper. Here's houses. Here's Paris. Ah, Paris....
Posted by Mary deB at 4:14 pm 4 comments:

My sky scarf is slowly but steadily growing. 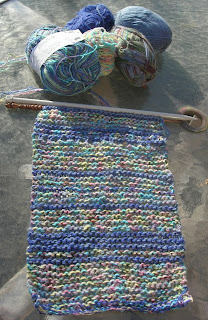 Every day since December 1, 2011 I knit one ridge, choosing two yarns from among bright blue (no sky is ever really that colour, indeed), softer blue (rather grey; no sky is ever that colour, either), white clouds (with pink and yellow) and grey clouds (with occasional brown and green bits). I have also added sparkly yarn on a couple of rows, but I don't think it really shows up here. Those were days when we were teased with a bit of snow.

I know the colours are not really sky-like, but a) it makes a more beauteous scarf, I think and b) I'm working with stash, so I did what I could. 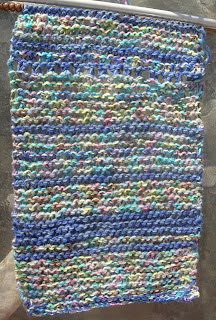 The eyelet row signifies the first of a new month. 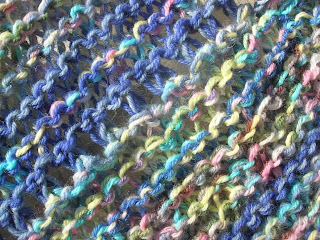 Today is bright and sunny, a double blue row. I must say I like those the best.
Posted by Mary deB at 11:18 am 2 comments:

We start the new year off right, with January's square done by the third! Stephen gave me Lynne Barr's Reversible Knitting for Christmas, and this is one of the stitches in it.

I like both sides, and now can't even remember which is her side A and which is B. 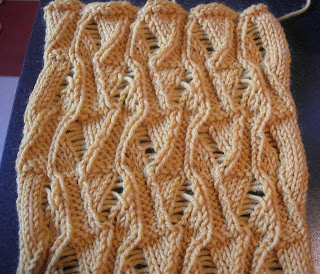 I think I like the top picture better, for a garment. For a blanket, this is not actually a very good choice of stitch -- people's fingers and toes will get caught in the drop stitch floats. 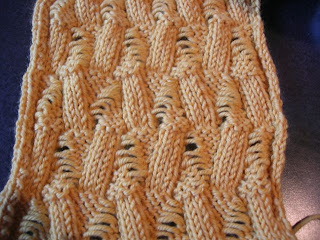 As usual, the whole melange on the floor. 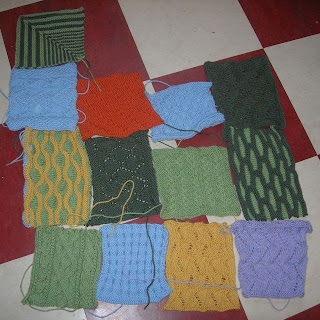 Looking at my yarn supply, I could make this blanket 20 squares instead of 16, I think. Or I could put sashes between the squares, instead of just sewing them together. Of course, we have to see how they all block out, and how much fiddling will be needed to get them together!

Just for good measure, I also darned two socks for Arthur this morning. I took care of another pair by deciding I have to take the toes completely off and reknit them. Not a chore I look forward to, but then, nor is darning. There are still several socks in the darning pile!
Posted by Mary deB at 1:18 pm 3 comments:

A new year with new plans

I seem to have joined some of those groups on Ravelry, like 12 in 2012, and the more dangerous Stash knit down group, where I have pledged to knit 12 things for charity in 2012, plus I may have said some things in the thread where people are doing 12 12s.

My list from that group in fact is:
I think the items from #3, #6 and #7 will overlap quite a bit with #5, and #2 and #4 might well be almost identical! Of course, that's only 7 times 12. The trick will be keeping track -- and I might well just knit away as usual and not bother with the keeping track. Bad to be so casual about it already, on the first day of the year!

Other plans:
Generally, I think I will tend towards smaller things, rather than sweaters.