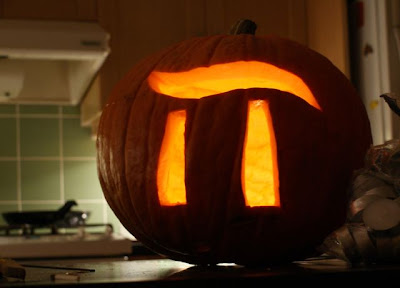 Happy Halloween, and see you in November for NaBloPoMo!
Posted by Mary deB at 8:44 am 2 comments:

Are these knitted or crocheted? So clever, whatever!

Finally this has reached its destination so I can blog about it!

Oh, my! This was fun to knit (although I ignored it for a while, when something new took my fancy -- can't remember what, now!).

The pattern calls for knitting each module onto the next one, but then cut the yarn at the end of each, and work in horizontal rows. I followed hints found on Ravelry and just knit the diagonal rows from bottom to top, picking up stitches for the next shell along the side of the shell I had just finished. I had two colourways of Kureyon sock, and mainly just let the colours flow, but did occasionally change things up. I don't think it looks diagonally striped at all, does it?

I finished it a couple of weeks ago now and mailed it off to my sister-in-law in BC for her 50th birthday! Stephen cleverly packed it in an iPad box, just to tease, and took it off to the post office. The fellow at the counter told him it'd be there "on Wednesday," which of course costs more than "sometime in the next couple of weeks." 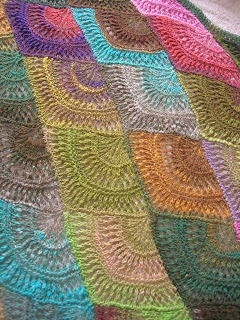 When her birthday came and went, and our tracking information showed that in a week it had got about 5 miles, we contacted the post office and had moments of panic, thinking something terrible had happened, but it did show up where it was supposed to be the very next day, and only a week later than our cheerful salesman had suggested!

I've been promised pictures of it in use, so do stay tuned for that! 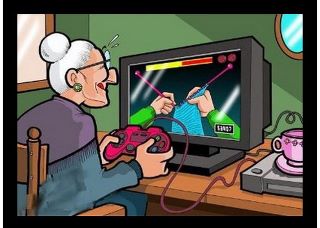 The October square is done! 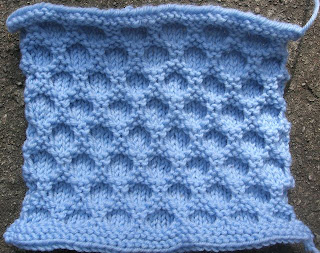 It looks similar to other squares I have done, with the sort of framed dips, but they are all different enough, I think! 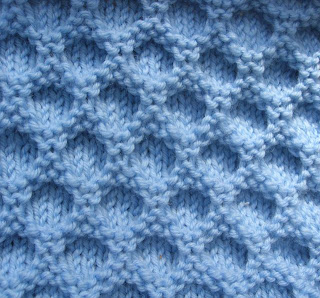 I think I might be in for a surprise when I finally block them all and see if they will really fit together neatly. That's what "sashing" is for, I guess! 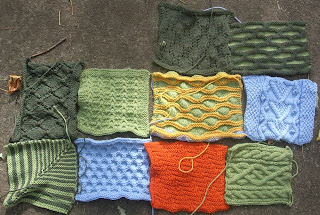 I am aiming for 16 squares in total. I think the KAL group on Ravelry was based on a blanket of 8 or 9 square patterns, and according to the master plan, one should knit each in 3 colours. Well, that didn't happen here. This square is from a different pattern, so I guess the original set is done! I shall see what the group does in November, and if there is no "assigned" square, I am sure I can come up with something. And I shall have a finished little blanket for next fall.

A cool thing I found

I came across this on Pinterest the other day: a sky scarf.

You gather some blue, grey and white yarns, and each day for a whole year, you knit a garter ridge in the colour of the sky (although more research on Ravelry shows that some people throw in pink or yellow on occasion, and some people keep track of moods rather than skies).

You'd have to pick a time of day to choose your colour, I think, since some mornings are clear blue and their afternoons are grey and thundery! The pattern does call for mixing two strands, so I guess you could do clear blue and grey together.

White for snowfall, or just for white sky? Should one have a wonderful pink, just for those days when one sees a great sunset?

Although this just involves 2 rows a day, I have a few wee things to get out of the way before I jump in. I think it would be fun, simple and a cool way to chart progress through the year. Maybe I will chart 2012.

This picture, by the way, is from the project page of the designer, leafcutter, on Ravelry. You can see it much better on Flickr.
Posted by Mary deB at 9:20 pm 5 comments:

It's October now, time to get ready for winter!?

It's been beautiful and sunny for a while. Cold nights and mornings, leaves starting to turn. Definitely fall and not summer, but warm during the day. Very nice, indeed. And time to think of the coming seasons. 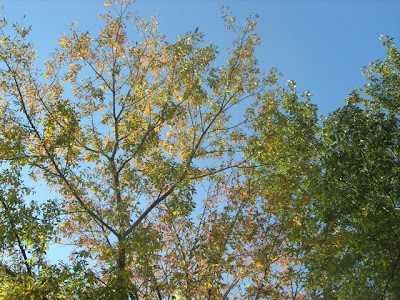 I have recently discovered Pinterest, which is a very big time-sink and it also shows me all sorts of things I wouldn't otherwise trouble myself with, like Halloween wreaths! Now, a Halloween wreath seems like a very silly thing to me, but a wreath for the door around Christmastime is a fine thing, and anything other than the cedar circles from the grocery store is even better.

First, you get a ring -- remember the lampshade project? I have a bucketload of lampshade rings that just need old glue and guck taken off, and then they are perfect for this.

Then you need some tulle, and I just happened to have a wee bit of white in a bag, so we cut that up and looped it on. It only covered about a third of the ring, so we had to do some thinking. I had some black, which was not quite the right texture and we weren't sure we wanted the Cruella DeVille look, either. So, new plan.

I happened to be out near Value Village, which was full of stuff for Halloween -- the wedding dresses with stains on the front which are only good for costumes, the out-of-season things they'd like to get rid of, the ... costumes and weird exotic funny things! I was in a rush, but ran through one rack and came up with a few options, ultimately deciding on a toddler-sized dress with three layers of tulle, in white and icy blue!

(At several points in the making of this, I said, "Hmm, I should have taken a picture for the blog." I don't even have a picture of the dress before we cut it up.)


The clear white is the original stuff we had, and the yellowed white is from the dress. Under the layer of white there were two layers of blue. It was a very cute size 2T dress with a halter top, an elastic waist in the back and a full skirt to go over the diapers! And perhaps it was even floor-length, though my understanding of what a two-year-old looks like is a bit misty these days.


We need to add a few details, find a ribbon to hang it, and sit back and wait for the snow, I guess!

(This took much longer to compose than it should have, because I am using Blogger's new template thingy and to get the pictures in the right places and not crazy looking I had to keep going back and forth to tweak the HTML. I think they wanted to make it easier, but they didn't!)
Posted by Mary deB at 10:48 am No comments: