It seems I haven't blogged in three weeks. Now I am thinking, "why blog now when November is coming and I can blog every day?" This is not especially reasonable, I know.

Here's a mini-post for you: 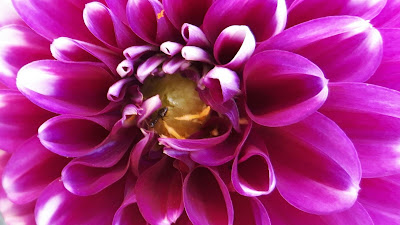 Some other art thing

I don't have pictures of Stephen's art today, but a week or so ago we went to another art event I want to show you.


It was called In/Future and was held at Ontario Place. I went to Ontario Place once in 1975, I think, and it was sort of keen. People who grew up here in Toronto can be very sentimental about it, bursting into song at the mere mention of the place.


The Cinesphere was the very first IMAX theatre. Didn't know that, didja?


There are silos that used to have educational displays about the weather in them, and pods and bridges, and it's all a bit "modern" and concrete.


Now it is temporarily empty, and looks abandoned. So, the In/Future people said, hey, empty space, let's put some art there.

You have to be this tall to ride on the Wilderness Adventure ride. We saw the animals from this ride -- not pretty! 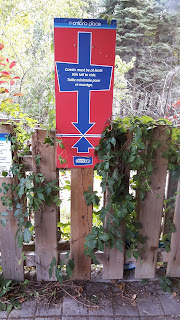 This big parachute-like thing billowed in the wind in one of the silos. 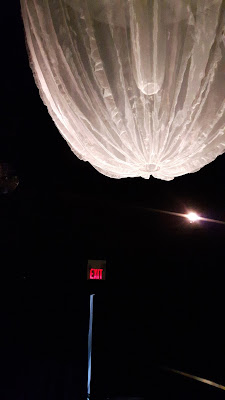 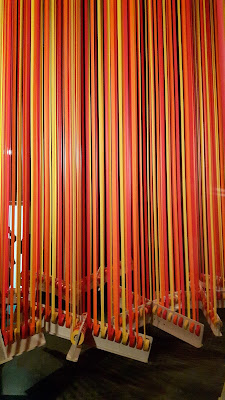 Outside, someone had found and arranged a big pile of bricks. There were blackened ones, dark ones, yellowish ones and white ones. This is an artwork I would like in my front yard. (Luckily Toronto has a big spit going out into the lake where construction debris has been dumped for generations, so there are lots of bricks available.) 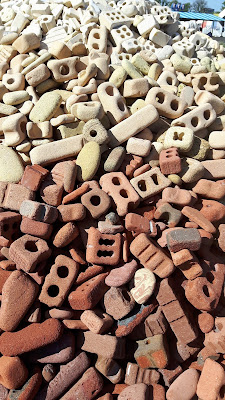 This is very cool, and would have been better if there had been more wind. These are cymbals atop poles, and there are drumsticks attached to strings. When the poles sway in a breeze, the sticks and cymbals interact. They look like giant otherworldly flowers. 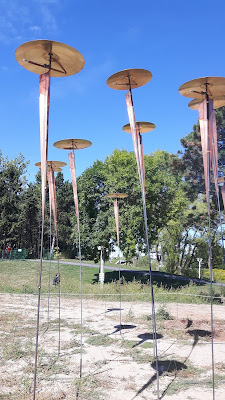 Ah, the tinsel building. It's nice to see a shiny, tinsel-covered building on a sunny day, even if I don't think it "hints at the power inside of the structure." 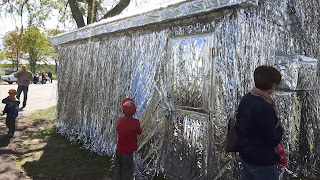 We were standing admiring the tinsel when along came a swan. I think these swans used to be available to rent, and pedal or paddle around the water surrounding the Cinesphere. This is the last surviving swan, being propelled by some friendly folk. I believe they were the king and queen of something. 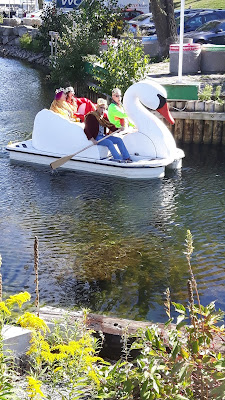 Of course it wouldn't be a Toronto thing without some interactive stuff for school kids to do. I think classes had come in during the week to build a dream city. Spot the Canadian flag. 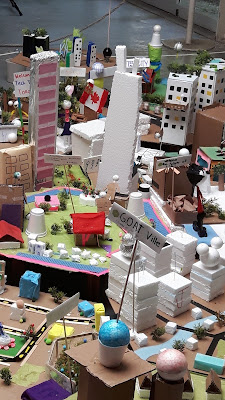 I have no idea what this originally was. The font is all wrong! But I do like it. 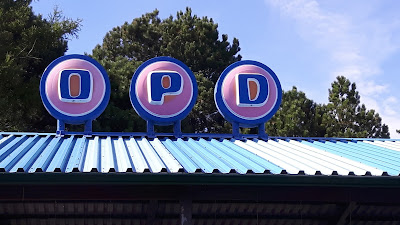 There were also video artworks and lots of other installations. There was at least one stage, but I kind of suspect more. We were cool enough to go see this rather huge display of really varied artworks in a location that was familiar, yet so odd. But we were not cool enough to know one should really go at night! We saw one music act, but couldn't stay to see the Imax movie. We went on the last day, instead of getting a pass for the whole 11 days. But we did have a really pleasant day wandering around.

(I realised I didn't link all the art pieces to their blurbs... You can find all the info here if you are interested.)
Posted by Mary deB at 9:15 pm No comments: 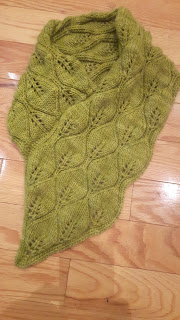 Well, look at this, a knitted thing.

Once upon a time, a long time ago, I got some Malabrigo yarn. I made things up as I went along and at one point had a triangle of blue, with a green scarf off one side and an orange scarf growing out of another... It was going to be great...

But truly, the yarn irritated my nose so much I never knit  it -- once I realized all those "colds" had to do with knitting soft wool or mohair or Lopi or ... on and on. 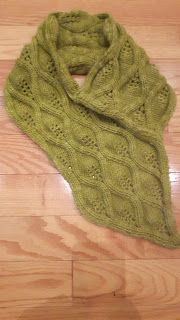 This sat around for years. So, the other day I un-kitchenered this lovely, leafy, reversible scarf from the rest of it and I filled the house with wool fluff by frogging the triangle and the orange bit. (I do have a vacuum cleaner.)

Of course, this is not really long enough to be a scarf on its own. I think I was very clever to sew it up into a cowl, with the pointy bit doing its pointy thing.

It is not very snug; we will see how excellent it is in a couple of months when it gets cold enough to need such a thing. 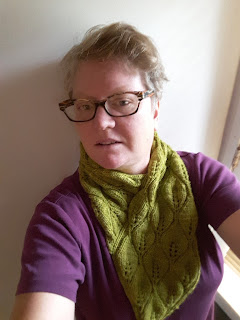 This is the month of the Stephen West mystery knitalong. Last year I made the Doodler, mostly from stash, and gave it away. This year's mystery is called Building Blocks and needs four colours. 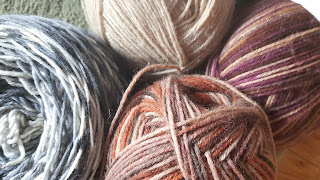 I didn't have enough of anything just lying around, and I didn't want to spend $100+ on something that I have no idea about (except it should be great...) so I got some 6-ply sock yarn from the sale basement at Romni and I'm good to go. 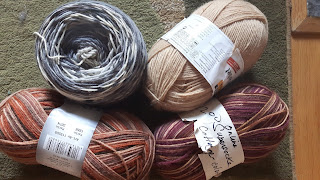 The first "clue" or part of the pattern is released next Friday. So I am at loose ends until then. I have another Koigu hat on the go, and I got some nice cotton someone gave me out of the cupboard and looked at it, but I have nothing compelling on the needles.

This weekend Stephen is showing his science-y art at the Queen West Art Crawl, which has meant renting a car (a giant SUV) and driving back and forth to the park where the show is. Today, after delivering him and his art to the park, I sat on hold with the "emergency roadside assistance" because there were two large nails in a tire and I wanted them to come and change the tire. It was a bit drizzly, so every tow truck and tire-changing guy was busy, but after a couple of hours and a couple of phone calls we have a crappy spare on our fancy SUV, which should last until Monday (a few more back-and-forths). I drive when I go out west, and I drove all the time when I lived in Texas, or California, but I am not a big-city driver at all. Nerve-wracking I call it... Pedestrians and bikes and streetcars all over the place!

My October goals, aside from getting to Monday without driving into anything, are to keep up with the knitalong clues and to maybe finish my Koigu hat. Anything more would just be gravy!
Posted by Mary deB at 9:16 pm 1 comment: