Niagara Falls. What a weird town. 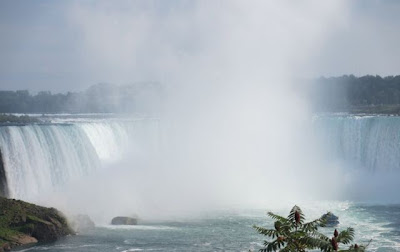 We have been for day trips a few times over the years, but this last weekend Arthur and I stayed overnight to have a visit with 3 other mom/kid duos. These were some of the E-mail Mommies and their kids, the Cyber-cousins. The moms and I have been e-mailing since 1996, when we were all pregnant! When I went to New York in 2007 I met up with some of them. At that time Helen wrote a super write-up of what this group is and means. I have known these women for 17 years, but met 2 of them for the first time this weekend, and another for the first time since about 1999. 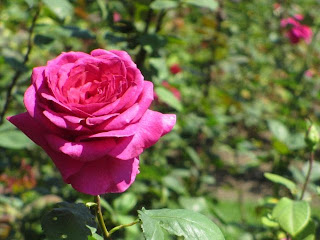 Three-quarters of us met at the hotel and wandered through a park to the Hard Rock Cafe for lunch. On the way the kids all took a zillion pictures of flowers. All doing the same thing, each in their own way. This was when Arthur first sighed that we should have brought the big camera. The fourth family joined us for lunch after battling traffic and we all had a good chat. It's weird... we all are quite familiar, though we'd never met. We end up having a lot more in common than just 16-year-olds.

After lunch, it was off to the Maid of the Mist. We have never done this before, but with only me and Arthur it seemed like half-price! And it was so cool, we will likely insist on doing it again one day with the whole family.

Everyone gets a blue plastic poncho to keep them dry. This turns out to be necessary, in fact, as we did go into the spray! Here we are up close and personal with the American falls. 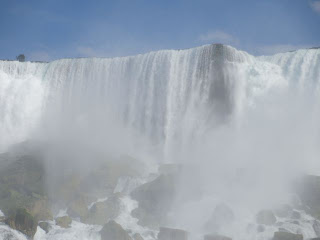 This is Maddie, who stayed drier than the rest of us. 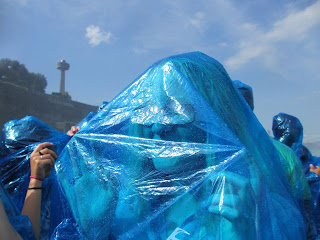 This is what she might see! Camera hidden under protective blue plastic! 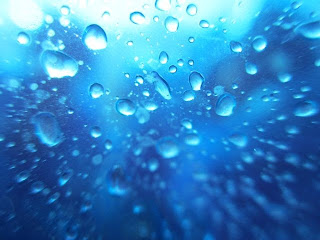 Arthur, post boat ride, perhaps wondering what he has got himself into. Did I mention the three others his age were all girls? 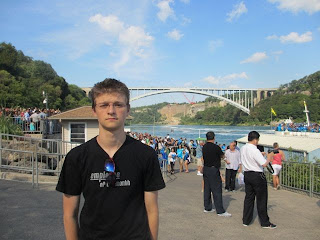 Here we are: the slightly damp, accidentally colour-coordinated moms. 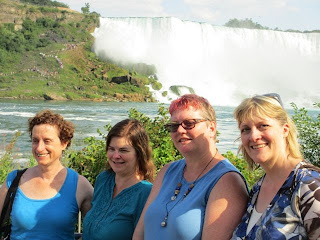 After our adventures, we had a bit of a chill-out in the hotel before setting off for dinner. The original plan was to go up the Skylon tower, get a great view and have a really expensive meal. But we figured that would be immoderate of us, so we went to Margaritaville! And perhaps indulged immoderately in teasing our children and making them accept pirate hats and balloon princess hats and swords and magic wands. They even got the crayons out after a while. 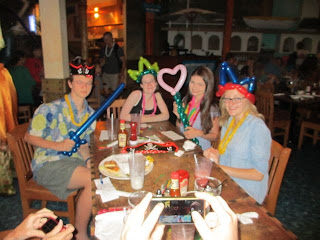 The next morning people had to start on long drives home, long lines at the border and all that jazz, so things broke up around 11 am. I look forward to a meeting one day of all of us! There are about 20, including one in Australia and one in New Zealand. We'll have to do it soon before the kids start wandering off on their own!

I'm not sure whether there was a morning train, but we had tickets on the 5:45 pm train, so we had a few hours to kill.

I asked at the hotel how to get to Lundy's Lane and Drummond Street. Oh, the guy said, that will take maybe an hour to walk to! When he heard we were looking for a thrift shop though, he said we would come to one closer in if we just headed out on Lundy's Lane. So we trekked off through the touristy part of town, up the hill towards the 1812 battlefields and, we hoped, the thrift shop. The tourist centre is full of chain restaurants, "attractions" like Ripley's Believe it or Not and a wax museum, and hotels. We approached the area where the actual residents must spend time, but I still didn't see a bank or a grocery store. (I spent $4 to use an ATM in town!) We finally saw the shop the man in the hotel mentioned, after about half an hour, and noticed that it was exactly at Lundy's Lane and Drummond! Sheesh.

I like to look at crockery and doodads in thrift shops but Arthur heads straight for the T-shirts. This time he found the holy grail of used T-shirts: 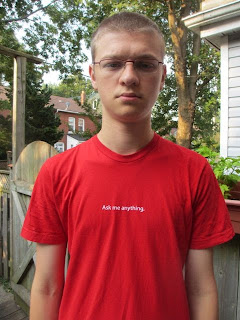 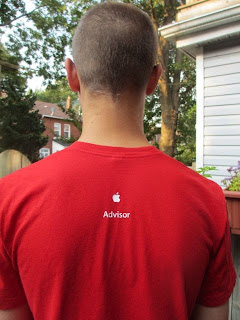 I got myself this cute little set (almost too cute and little; could be a challenge in the morning to get a spoon in the sugar bowl's wee opening) made in Occupied Japan. I love ceramic fruit and veg! 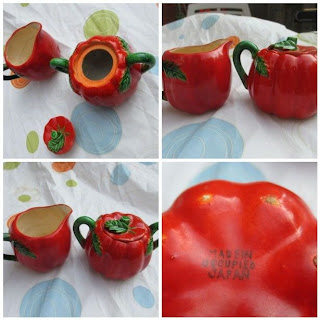 Finally we just diddled around town; we did some tasting in a hot sauce shop and then tried to get into the casino (no go; the bouncer kinda knew that Arthur was not 19) and eventually even walked to the train station. On our way we saw lots of old houses just waiting for someone to invest a load of money to fix them into nice B&Bs. And quite a few nice B&Bs, mostly full up. 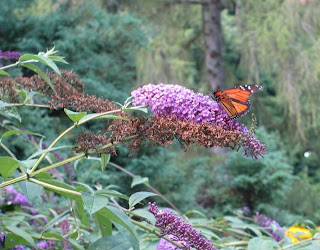 It was great fun, really. Niagara Falls is a great place to go to look at a big waterfall, but after that, things get a bit weird. Eating and monsters will only entertain people for so long. Someone needs to come up with the next generation of amusements. But if you are with friends, even friends you have never met before, it is all good fun!

This past weekend Arthur and I went to Niagara Falls to meet some of his cyber-cousins. That is fodder for a whole different post, but this one is about our other travelling companions, the Sleepless Knights.

We took the train from Toronto. It was okay. Arthur played games on his phone and the Knights just lounged around with a napkin. 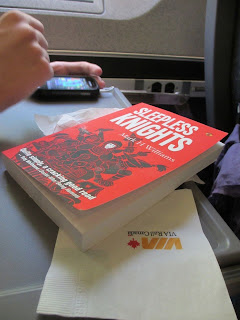 At last, Niagara Falls. We are waiting to go on the Maid of the Mist, and are looking across at the American falls. The knights did not actually get to look at the water thundering and pouring down beside us when we were on the boat because we didn't want them to get wet. They are an excitable lot at the best of times. 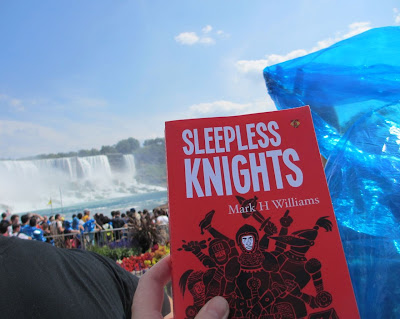 After our boat trip, Arthur, the cousins, the e-mail mommies and I had dinner at Margaritaville. Sir Gawain would have loved it but he can not be trusted in a bar with fancy drinks and women on stilts, I believe. 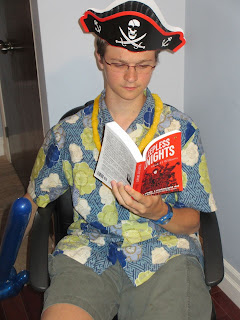 We got the fancy hat, the lei, and the blue balloon sword (blown up and tied by the woman on stilts; ultimately left in the drawer of the hotel dresser to confuse future travellers) then got back to reading. 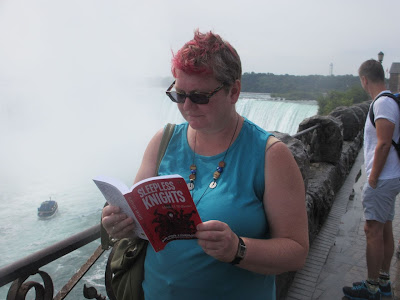 Natural wonders are all very fine, but a good book is such a treat.

The Sleepless Knights were delightful companions on this trip. They are good at travelling and questing and all that. Their adventures are actually much more entertaining than mine and the people/ creatures/ damned dead that they run into are worth getting to know, for sure.

(Disclaimer: I actually bought this book; and then I entered a contest and won some book-related stuff. Some years ago, I attended the wedding of the publisher, but he did not force, compel nor pay me to take the knights to Niagara Falls.)
Posted by Mary deB at 10:23 am 3 comments:

This past summer I was hanging around the book sale at our street party when one of the neighbours appeared, not with yet another John Grisham novel to donate, but with two huge, enormous, gigantic, brilliantly coloured posters. 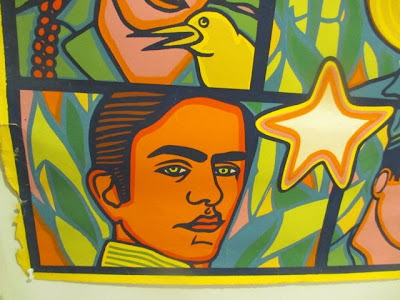 They were amazing, and the woman who was running the sale and I quickly each handed over ten bucks and took charge of our posters without bothering anyone else with the information that they even existed. All's fair in such situations, indeed. 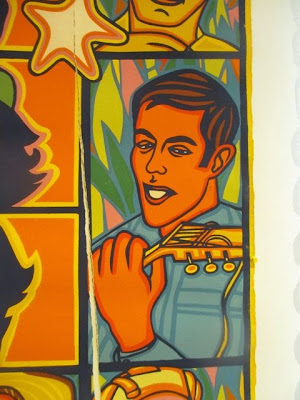 Mine was a bit ripped on the bottom, and in my excitement to show Stephen, I quickly unrolled it and ripped it even more. It is on crappy, cheap, old paper. There are traces on the back of paint from the printing process. 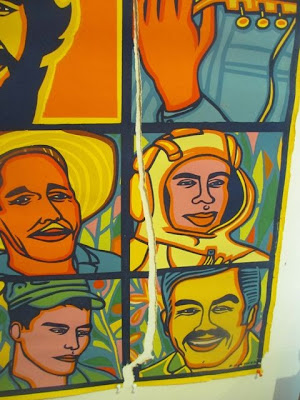 Can you guess who these happy people are? The happy handsome dudes, the happy guitarist and the happy astronaut? Is he really an astronaut, one wonders, or maybe a deep-sea diver?

They are all working happily together with these guys, Fidel and Che. 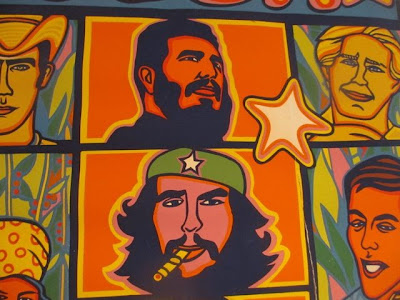 Enjoying the sunshine and the music and the bounty of the land and all that stuff, in poster-paint colours, in Cuba. 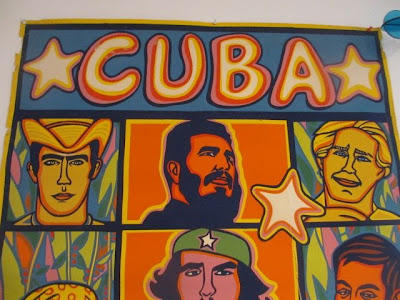 I think the guy below Che is Raul Castro. You can see an old picture of him here. At first we wondered why Shakespeare was on a Cuban poster. 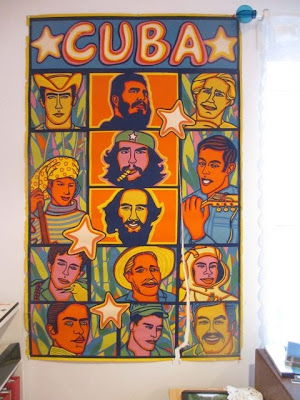 My neighbour said she brought a few of these back from Cuba in the 1970s and these two were the last of her stash. I am so glad she figured it was time to pass them on.

I looked into framing this. It is about 3 feet by 5, so a piece of glass to cover it would be horribly heavy and atrociously expensive. I hemmed and hawed about it for some time, but finally just stuck it up with pins. I'm sure it has suffered graver troubles in its time. One day I will treat it properly. And now it makes me smile whenever I see it!
Posted by Mary deB at 4:34 pm 3 comments: 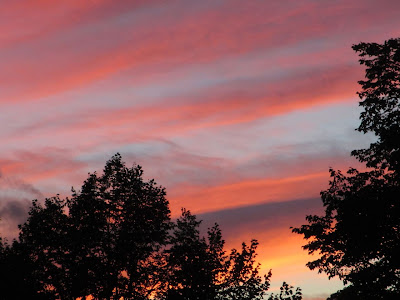 I've been meaning to get back in the habit
of a Saturday sky picture for ages.

Tonight's sunset was just what I needed.

I knit a hat! I even sewed the ends in and everything, and it is done!
I asked Arthur to model it and he put it on his knee. 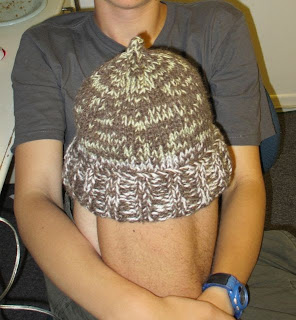 The brown is some handspun I got in exchange for a bunch of magazines, and the creamy colour and green is old stash, wool with a bit of viscose. Pattern (what? Mary used a pattern for a hat? Well, sorta) is the Basic Bulky Man Hat, but I didn't do the 4-point decreases at the top. Just the usual 8 decreases around a few times, down to 4 stitches to make a teeny i-cord bump. 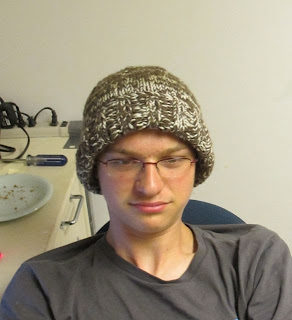 It's so delightful to wear a double-thick wool hat in August.
Posted by Mary deB at 10:09 am 1 comment: