I find myself with actual knitting content today. And some pictures!

Since it is the last day of the the month, let's have a look at those June goals... Hmm.

Big brown thing, no progress since I last reported.

Basalt, I have finished the 3rd hexagon and have started number 4, which will be five-sixths of a hexagon! It's a crazy looking thing at the moment, not to mention that I haven't taken a picture of it. Next time, I promise. 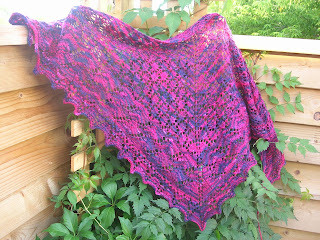 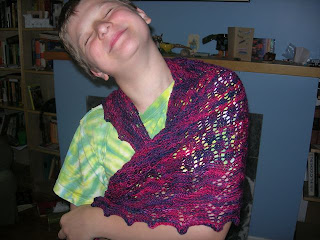 My model was not especially cooperative. 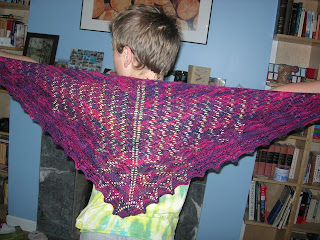 It is small! More of a tuck-into-the-coat shawl, than a wrap-up-against-the-elements shawl, but really, for one ball of yarn, that's quite all right!

I have great plans, shawl-wise. I'm going to tackle one of the shawls in Victorian Lace Today. I have some stunning Malabrigo lace yarn. It might just have to be a bit of a secret, though, so I will say no more for the moment. I also have a plan for my laceweight that Pixie gave me last fall.

But here are some immediately do-able goals and plans:

Basalt. It can be done!

Brown thing. Yes, do that, too!

I've got a second sock on the needles, so that might see some action.

Other UFOs hanging around include a nice second mitten, which is grey and so fits in with Project Spectrum these days, and a border for a blanket, which I think I've figured out, but which will have to be done in short bursts so I don't die of alternating boredom and fuss-tration.

I'll finish something before casting on the next big thing!

And I'll show you the Basalt progress next time! You'll be amazed!
Posted by Mary deB at 9:33 am No comments:

A bit of a postbox note 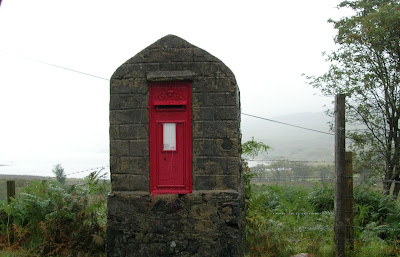 I am thrilled whenever I check my site meter and find that people still come here looking for postboxes! I get visits most often via a whole list of Edward VIII boxes on the web. It covers at least 57 of the 100+ pillar boxes. To think, I haven't seen a proper pillar box in almost two years. 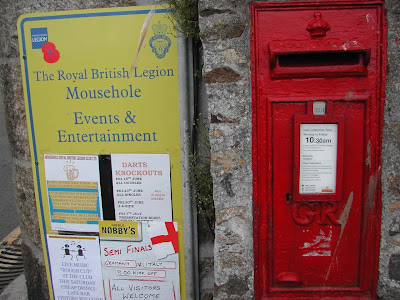 My most sought-after pillar-box post is the one with dear Edward VIII, here, but there are others. 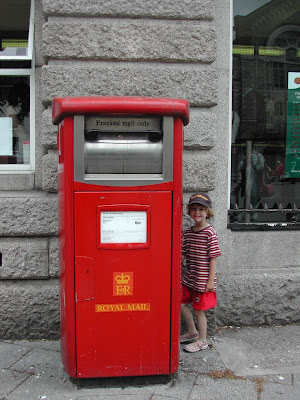 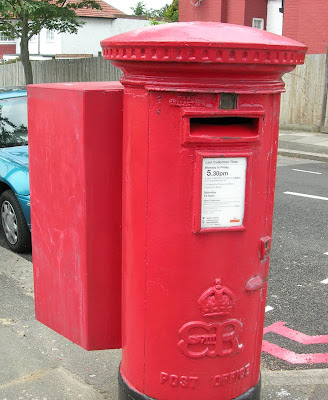 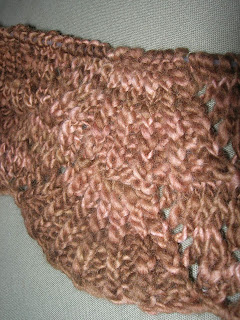 What's been going on this week?

I got a good start on the second half of the big brown thing, but it is a bit hot to knit this.

I fear I will put it aside for a while and it will become a burdensome WIP. Must be strong...

I finally found enough yarn -- I bought the first 3 skeins at Knitomatic, and when I went back there looking for more, found only 1 more skein.

Lettuce Knits doesn't carry Manos, Romni didn't have the colour, so I ended up at the Knit Cafe, where I found many skeins of exactly the right stuff. I got 3, so I should have plenty. I might let it slide for a short time, but I must have it when the nights turn chilly! 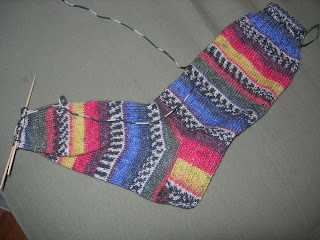 The sock of all colours just needs its toe grafted. Of course, then I'll have to knit another one. 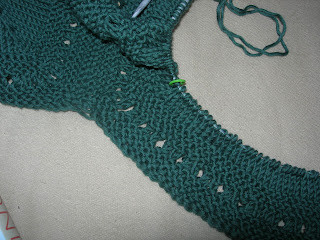 I got out the Basalt Tank, finally. You might be able to tell that I've knit a few rows since you last saw it. When was that, November?? Yeah, well.... This is still the third hexagon.

And remember I said I wouldn't start anything new? I don't think that frogging and reworking is really starting something new, is it?

I ripped out the pink/navy scarf and am turning it into a Swallowtail Shawl. Really.

It's now a blob, especially since I am knitting it on straight needles. 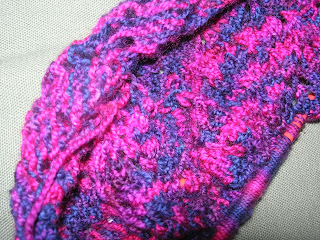 I assume it will be pretty when it is done! (It's garish in real life, but not this garish!) It is destined to be a gift, and I even know for whom, and when it needs to be done. So there.

Blogger now lets you postdate your posts, so I will click a few things and this should appear like magic tomorrow morning. Let's try, shall we?
Posted by Mary deB at 6:00 am 3 comments:

Today was the end-of-term picnic for Elaine's school.
So we got up late, hurriedly bought some fruit and arranged it artfully. 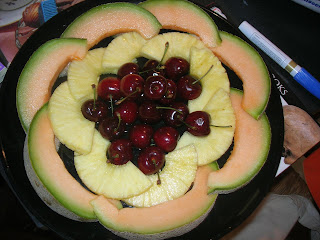 Then we went to the picnic and there was a bubble machine. 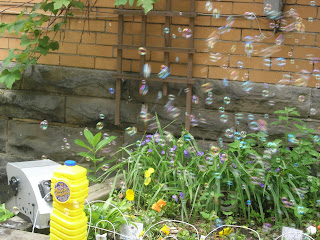 This is the wall. Make it into a blanket and report back. 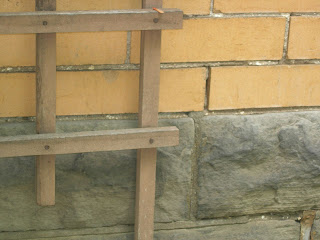 On the way home we saw that last night's storm did some damage in our park!
Things will be bad, shade-wise, if they decide to chop down the whole tree, but they likely will, since it is rotten inside! 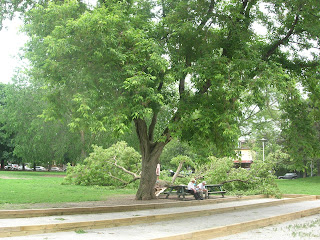 And here's some moss on the fallen bough. 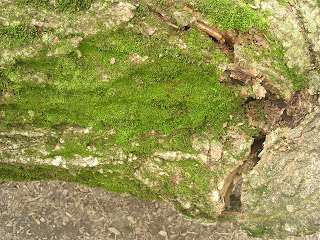 All right, everyone, back to your knitting.

We are the champions 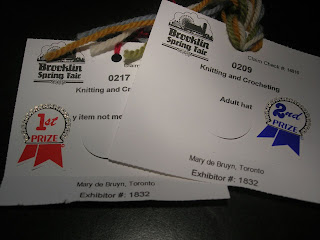 This past weekend was the Brooklin Spring Fair again.

Last year I was a big loser there, but Arthur won two ribbons for his photographs.

This year I entered 5 things: 3 photos and two knitting items. My photos didn't win anything, but the red lacy scarf got a first and my wormy cabled hat got a second. I was going to enter Stephen's Retro Rib socks, but that didn't work out. He took them to a conference in Norway and came back with only one! He checked with the hotel and everything, but the sock has vanished. 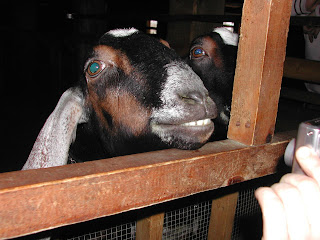 Arthur added a second prize ribbon to his first and third from last year!

This smiling goat was entered in the "Farmyard Heroes" category.

I'm not sure how heroic she really is, but what the heck, a second place ribbon is jolly good.

I don't think I've shown you my wormy hat, because I once had the idea that I would write up a pattern and make my fame and fortune from it. 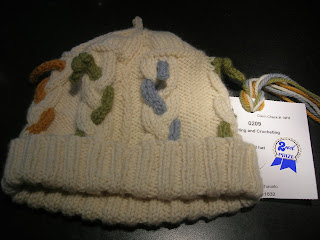 But that whim has passed, so here you go.

I would still like to write a proper pattern, but really, just knit a hat with cabled braids, making one rope of each cable in a different colour. This hat has 3 ropes of 3 stitches each, with 8 stitches in reverse stocking stitch between. (I knit it flat, because of the little bits of colour. I think it could be done in the round, but you'd have to be careful with the coloured ropes. I'd also like to know how to make a lovely neat seam on reverse stocking stitch.)

When the hat is long enough, and you want to start the decreasing, put the coloured stitches on a safety pin to work in I-cord later. I worked a couple of rows of plain reverse stocking stitch before decreasing on 8 points. When I got down to 8 stitches, I did K2 tog all around, and worked I-cord for an inch or so before finishing off. I then worked the coloured ropes into I-cords of varying lengths, tying some in knots, letting some just dangle. La de da! 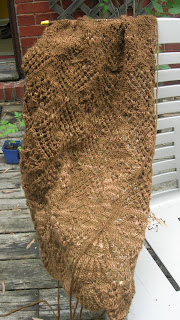 I'm still plugging away on the big brown wrap. I've got one half finished, and a few inches done on the other side.

It's getting rather warm and humid for working with Manos wool! At least I'm not knitting with this great thing in my lap! Things are going much more easily the second time through the pattern. It'll be so nice and cosy when it's done, though I'm not looking forward to grafting the two bits together.

This would actually be a nice pattern to adapt to the guidelines from Afghans for Afghans for a rectangular shawl for women. They need big wraps, but lighter than this, I think. Perhaps that will be next winter's charity project...
Posted by Mary deB at 7:03 am 1 comment:

It's now too hot

This morning it was 20C before we'd even had breakfast. Muggy and stinkin'.

So, soon Elaine will want to be trying out her rollerblades instead of her ice skates.

I wonder if I should show her this: 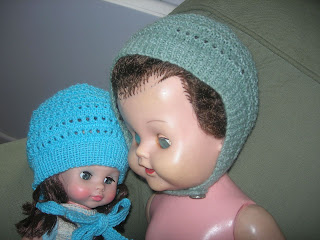 These little ladies are modelling the latest in baby hat fashions.

The hats and many other things will be at the Pedestrian Sunday in Mirvish Village this weekend, though I'm not sure the dollies can make it! The Palmerston Squares, my gang of knitting moms from our school, will be part of the festivities, showing off things we have made this past year to send to an orphanage in Zimbabwe.

We will have a table and some chairs, some yarn and some needles. We just need YOU! There are lots of things going on, so check out the scene and say hello to the knitters!
Posted by Mary deB at 11:02 am No comments:

The beginning of the month is a good time to sort things out, settle things down, straighten things up. Let's see now....

I would like to show you pictures, but one camera is dead (really dead; every picture it takes is totally black) and the other is off with Stephen today.

I'm still happily working on the big brown thing. I still don't have enough yarn and have tried two small yarn shops in vain. A trip to Romni is in order. I should really take with me my Friend Who Buys More Than Me, but I already took her to Lettuce the other day, where she dutifully did her part. 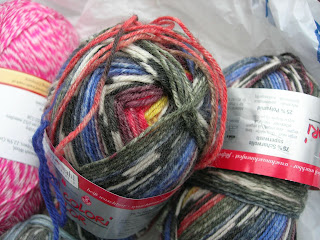 I'm also working on a sock, just because. I'm turning the heel. I got this yarn from Heather a while back, and thought I'd written about it, but maybe not. It's what you'd call "colourful." The pink on the left there is Tofutsies which Haley gave me.

And I'm acquiring new yarn, too, though not really with much purpose. There was a swap at Knitomatic yesterday and I took up a garbage bag full of stuff I'd collected... People know I do charity knitting and clubs with kids, so they tend to donate/dump yarn. Mostly I really appreciate this, but sometimes it just seems stupid for me to store all this stuff I'm probably not going to use. It's not like 10-year-olds learning to knit are going to use up more yarn than a constantly knitting adult!

Anyways, I took up some nice stuff and some crap and brought home 3 balls of Debbie Bliss merino dk and 2 more balls of garish sock yarn!

After the swap, I returned to our street, where our annual street party was in full swing. We do many silly things, including sell our junk to one another at our little yard sale. I came away with two balls of glittery something, which I will photograph for you one day soon. It's not fuzzy, just shimmery, and perhaps I can even hold it together with the Debbie Bliss, which can only be described as "pale putty" coloured and could use some perking up. Sometimes I feel I have to use up the silly acquisitions even more desperately than the stuff I really have an idea for when I get it! This is foolish, I know...

Goals for the future

I hope to finish the brown wool wrap in June, though it won't get much use then!

And something for my mom's birthday in July
And the jazzy socks
And the Basalt tank (oh, my gosh!)
And some lace

That's more than enough for June! So here's my one vow for June: I will not cast on anything new! I'll put an end to the startitis which is creeping up and gaining control!
Posted by Mary deB at 7:34 am No comments: