Part of the knitting pile

I've been knitting a bit, and sorting stuff out a bit.

I had started on a pile of Arthur's old socks: cutting the toes with big holes off and reknitting new, whole, longer toes. I did one successfully, but the second one was a big waste of time. I got him to try it on to see when to start the toe decreases and the sock was too small around to fit his ankle and leg comfortably. So, the new bit got ripped back and the old bit is sitting somewhere awaiting its fate.

Since my good intentions were thwarted there, I decided to cast on a whole new pair of socks. If you can't do something quick and small, just do something bigger. Harvest Dew recently caught my eye, and I had just the yarn to make the slip-stitch pattern look like dragon skin. 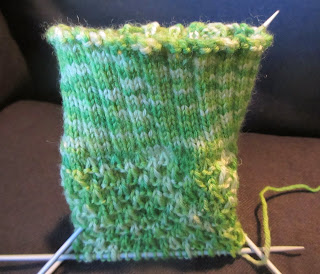 This is some On Your Toes I had in the big box o' sock yarn. If Arthur plays his cards right, he might even get a matching pair this time, unlike the singles I've been making him lately.

My other big pile of half-done knitting-related stuff is this: 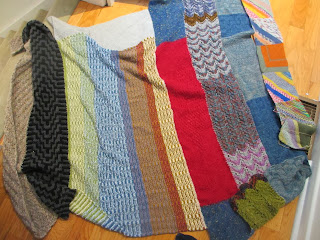 This is a blanket of scarves! Some are long and one or two are wide, and there are a ton of bits that will get stuck on the outside of this.

These are a few sock yarn squares (and one apparently left over from 2006's blanket).  (Oh, heavens, I just looked back through old blog entries looking for this blanket. I knew I'd started in England, which means before the summer of 2006.... I finished it all up in 2009, with a 2-year hiatus while I thought of how to border it! And I know the sock yarn blanket was a fantasy thought up many years ago as well.) Anyways, this strip will get added to the scarves and then I will think up the next bit! I have a pretty huge number of squares that "will one day be blankets." Now it looks like they will all be one blanket!

Meanwhile, I seem to have lost half a sweater back. I know it's around here somewhere...
Posted by Mary deB at 1:55 pm 1 comment:

Wow, I just learned about some great designers 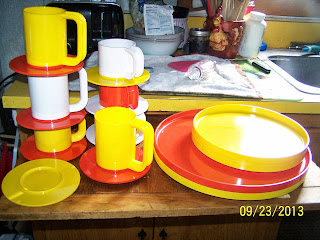 I learned something brilliant about these cups Thursday night. (They are on Ebay; you can buy them.)

I saw a movie called Design is One. Massimo and Lella Vignelli are Italian-American designers who designed everything. Just everything. 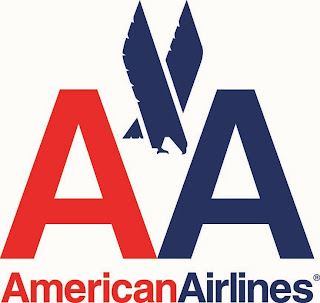 This was American Airlines' logo for over forty years. I hear they've updated. 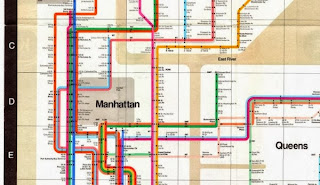 Subway maps come and go; this one is in the Museum of Modern Art. 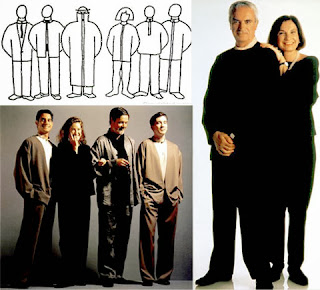 How about some comfortable clothing? They designed that, too. And some stunning silver jewelry. 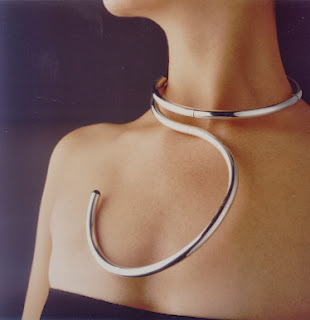 They even designed a church. It is a lovely looking place, with a heavy plain altar ("God's table") and variable seating and this gorgeous silver. 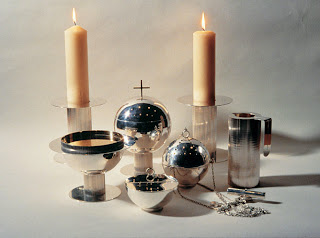 Wait, I was telling you about the cups. The original design of the cup is shown in the white one on the righthand stack. The plastic flows smoothly, and so the top of the handle forms an opening in the top of the cup, and if you are a greedy North American with your coffee up to the top, it overflows and makes a big mess. Of course, a cool Italian would just have a bit of espresso in the cup, a demitasse, modestly and elegantly. The company that made the cups eventually put a bit of plastic at the top so people could have their giant cups of coffee, but Massimo says in the film that people are now learning that perhaps he was right in the first place, and they want the original look.

I started this post days ago. It was my first "normal" week for a while!

First there was the beginning of school, the going-back hustle and bustle. Then came the film festival, which I semi-blogged, before going off to BC for most of the next week. When I came back we had two catastrophes at once: internet failure and bed bugs, which we think we picked up on holiday at the end of August. (We called in the big guns and have had no indication of a bug in the house since.)

Let's see... then what? Ah, the first week of October I was called to a jury panel, so I sat in a room with a hundred or two other people waiting for the wheels of justice to turn.

On the first day of my jury panel, I asked the man at the metal detector by the front door about knitting needles, and he seemed to suggest that non-metal ones would be okay. I asked the guy who was hanging around in some official capacity in the actual jury panel room and he told me no knitting needles. That was okay, because I had a 500-page novel to read, but the next day, having finished the book, I decided to call the office and ask again. The woman there said of course I could knit, but just bring "the flexible kind of needles."

So then, a hat on the good ol' 6 mm wooden circs. Ah, but yarn, what yarn do I even have? Things are still in a state of turmoil here and there (due partly to the lack of a "normal" week for some time) but I found a bag of miscellaneous balls of 4-ply that I once bought on eBay. I figured two strands of this held together with half a ball of leftover sock yarn would be about right, and cast on for this hat. That took care of Wednesday (and the bag of scraps) and then on Thursday we all had to troop upstairs to the sixth floor to sit in a courtroom and perhaps be picked for an actual jury. I got one step closer, but didn't get picked ultimately. One week: a book, a hat and a lot of sudoku puzzles.

Also in the last little while, I finished a sock I started for Arthur an age ago. Lucky me, he tends to wear single socks, so I am not fussed about making another right now. 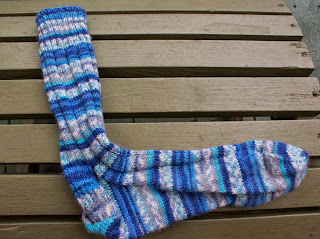 This summer I got on the bandwagon and made a honey cowl for Elaine. She picked the yarn, and she's even worn it once already. It was fun, but next time I will put an end-of-row marker right from the beginning, because you can see the "seam" line jogging around there. The picture is upside-down, and shows the earlier-knit bit at the top. 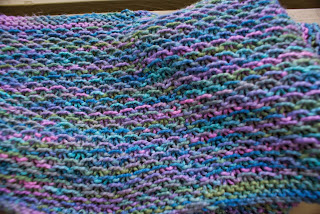 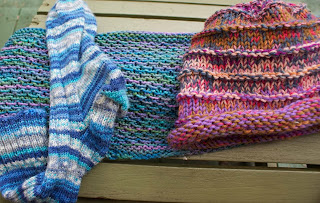 My present project involves sewing together a bunch of scarves no one ever wears. A crazy old blanket is emerging.... I got a few scarves sewn together before I remembered various half-started squares blankets. Will dig out the squares and see what happens then!
Posted by Mary deB at 6:03 pm 2 comments: 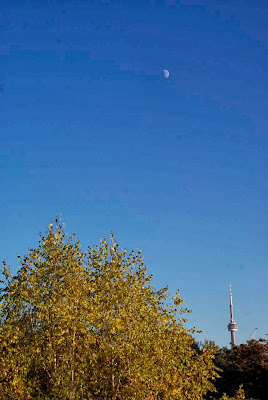 Today the sky is clear and wonderful. The moon is out at 5 pm, the trees are beginning to turn, and that old CN Tower is still poking up above everything.

And cameras and cables and computers are all within reach. There may be a knitting post shortly!

The crazy way we do things

I assume I am not the only one who plans projects like this.

I had some extra yarn I'd bought for a cowl for Elaine, and I still had the receipt, so I took it back to the shop and swapped it for some lovely pale grey laceweight merino. So keen, I look through Ravelry for patterns. Lots of ideas, so many ways to do things, going from one scarf or shawl to another...

Finally I realise I own that perfect pattern, and have even begun to knit it with some other perfect yarn. I think I have about 3 inches done...

Will I now pick up that 3 inches and make the perfect shawl, or will I attempt to "quickly" do something with the new perfect yarn?

(Will I ever get organised to show you pictures of the cowl, a hat, a sock or two that I have knitted?)
Posted by Mary deB at 11:24 am No comments: