A quick look at the scarf

It has, I think, finally properly become spring. This morning I looked at the forecast and cut my solid green yarn because it looks like even nighttime temperatures will be above +3ºC from here on in.

I did have to go out to get more green, though, a week or two ago. You can see that it is more vibrant than the previous. I don't think it will matter much in the final riot of colour. As the temperatures dip in November, I'll have that nice bright green to look forward to.

Last year at the Hot Docs fest, I worked outside in a tent for a day or two, and needed hats and mittens (though I see I didn't blog about the misery of those shifts). Now it is lovely and sunny, but you can see here that last week, during the first days of the festival, we got a few cold days again! 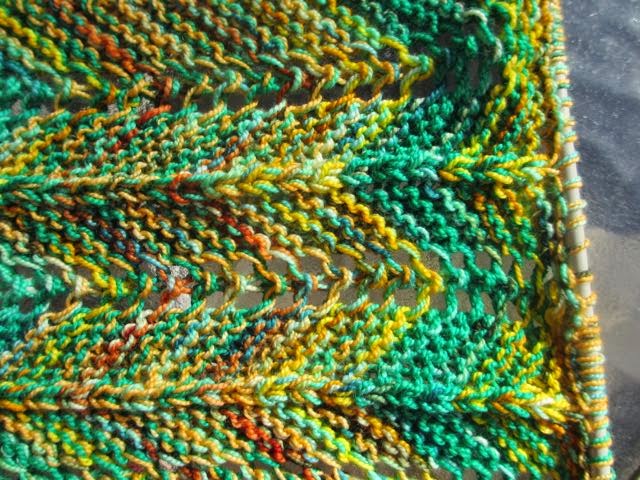 I have been seeing two films a day for a while now, and have another two today. Getting worn out, I must say. I'll report back soon about more movies, a bit of knitting and future plans.
Posted by Mary deB at 9:49 am 4 comments:

Every year at the end of April, Toronto is all documentaries, all the time. At least, my Toronto is! I am volunteering again this year, and I had a package of tickets so I will see about 9 or 10 movies this year, I think.

The volunteers get to rush the industry screening of the opening night film, so I got in to see Tig on Thursday. Comedienne gets cancer (on top of everything else), becomes famous. Life goes on, in its usual crazy way.

I was glad to see that she was coming for a Q&A after the show, so then I knew it was more likely to be a happy cancer movie than a sad cancer movie. It was a great story about a really miserable year, and indeed it does have a happy ending! I told Elaine the basic outlines of the story and she asked how long the movie was, because "that's a lot of plot for 90 minutes." Super all round. I can't find a trailer, but here is an interview with Tig at the fest.

My next movie was an oldie but goodie. Pleasure at Her Majesty's is a movie made in 1976 documenting a show to benefit Amnesty International by the Monty Python folk, Peter Cook, Dame Edna, and many more British comic geniuses. 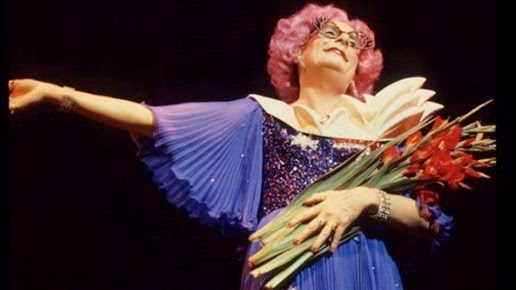 You can apparently see the whole thing on YouTube, but if you click here you should just get the Lumberjack Song (with a bit of a duel beforehand). I wanted to applaud the acts in the middle, but it was, of course, just a movie... Later this week I am seeing Monty Python: The Meaning of Live, so I can see how things progressed! Shall I see the Dead Parrot sketch almost 40 years later?

Today I took the kids to see Being Canadian. They have a web page where you can watch the trailer, which looks a bit dumb, but the movie is not especially dumb -- just quite funny! Famous and not-so-famous Canadians talk about history, maple syrup, hockey, insecurity, curling and donuts. 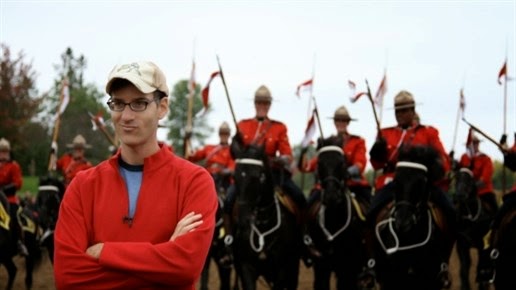 And Mounties. It will thrill and amaze you, and you can already download it from iTunes, apparently!

So far, so good! I have two more volunteer shifts to work and a few more docs to see; Stephen is in Japan; I think the kids are getting fed and getting to school, so it's all just fine.
Posted by Mary deB at 10:41 pm No comments: