It's that time of year: the Toronto International Film Festival approaches. This year, like last, I was away the last week of August, which really messes up one's festival preparation.

There are two ways to buy ticket packages for the fest. One is to buy a number of tickets, which one then matches to movies one wants to see. This involves sitting at a computer with a calendar, coloured pens, post-it notes and lots of leisure to check different movie times and make flow charts and time-management lists. In the last week of August, alas.

You can also buy a bunch of tickets and say, "Gimme some movies," and then get presented with some non-exchangeable tickets to movies. You can't say "no romantic comedies, please" and you can't say, "only English-language films" and you can't say you like short films or documentaries or anything. Just five movies that start before 5 pm, please and thank you.

Last year I did this and got a load of madness, mayhem and murder movies. They were all good, but not the movies I would have chosen. (I did choose one movie last year, and it was not as good as I would have liked!)

This year I aimed for the best of both worlds. I got a five-movie TIFF Choice pack, and I am super pleased with what I ended up with. Super, super pleased. This year I seem to have got the Pretty Big Gun pack. I have Keira Knightly and Ben Kingsley and Eddie Redmayne playing Stephen Hawking. (The really big guns this year are Robert Downey, Jr, Benedict Cumberbatch and Alan Rickman.)

I also got what's called a Back-Half pack, which gives me six tickets to movies in the second half of the festival, and I don't get to pick them until this Tuesday! Argh! The off-sale list is growing ever-longer, and I have to force myself to remember that I had thought this was a good idea, and that I would be delighted to see the lesser gems of the fest. I will, it will be fine, there's plenty to see....

But really, who would have thought a three-hour-long documentary about the workings of the National Gallery would be sold out so quickly? Who would want to see that, except me?

I am writing this just as the single tickets go on sale, so the TIFF site is wretchedly busy and I don't have the patience to link all these things. Stay tuned and I will try my best to blog more about it.

I guess I should also tell you about our holiday last week, the knitting I am doing, the festival knitting I will decide upon.... I always think a sock or hat goes well as lineup knitting... Oh, and school starts soon -- another reason to put off most of my festival viewing till the second week!
Posted by Mary deB at 9:16 am 1 comment:

Quick look at a bunch of dishrags

I needed to make some dishcloths for a housewarming gift, and then got a bit carried away, trying to finish up all the bits and bobs of yarn in the bag.

So here is what happened:


I am left with some beige from this last cloth and a tiny bit of the white, along with a few bits that are not even long enough for a full row of a square cloth. This does not mean I need to rush out to reestablish the dishrag-cotton supply!

Now if I can just work the same trick on the sock yarn... Don't hold your breath.
Posted by Mary deB at 11:56 am 2 comments:

Okay, pictures from one camera are loaded on to my computer. Stephen recently "upgraded," and you know the trouble that can cause.

Stanley Park. We walked about one day, checking out the seawall and Lost Lagoon and the old zoo (and rode bikes around several more), and here you see Arthur trying to take a picture of a heron at the lagoon. He is retro about his photography and uses film, so he tries to get things right, rather than just firing off a bunch of shots and hoping one turns out. I think the bird flew away before he got a shot. 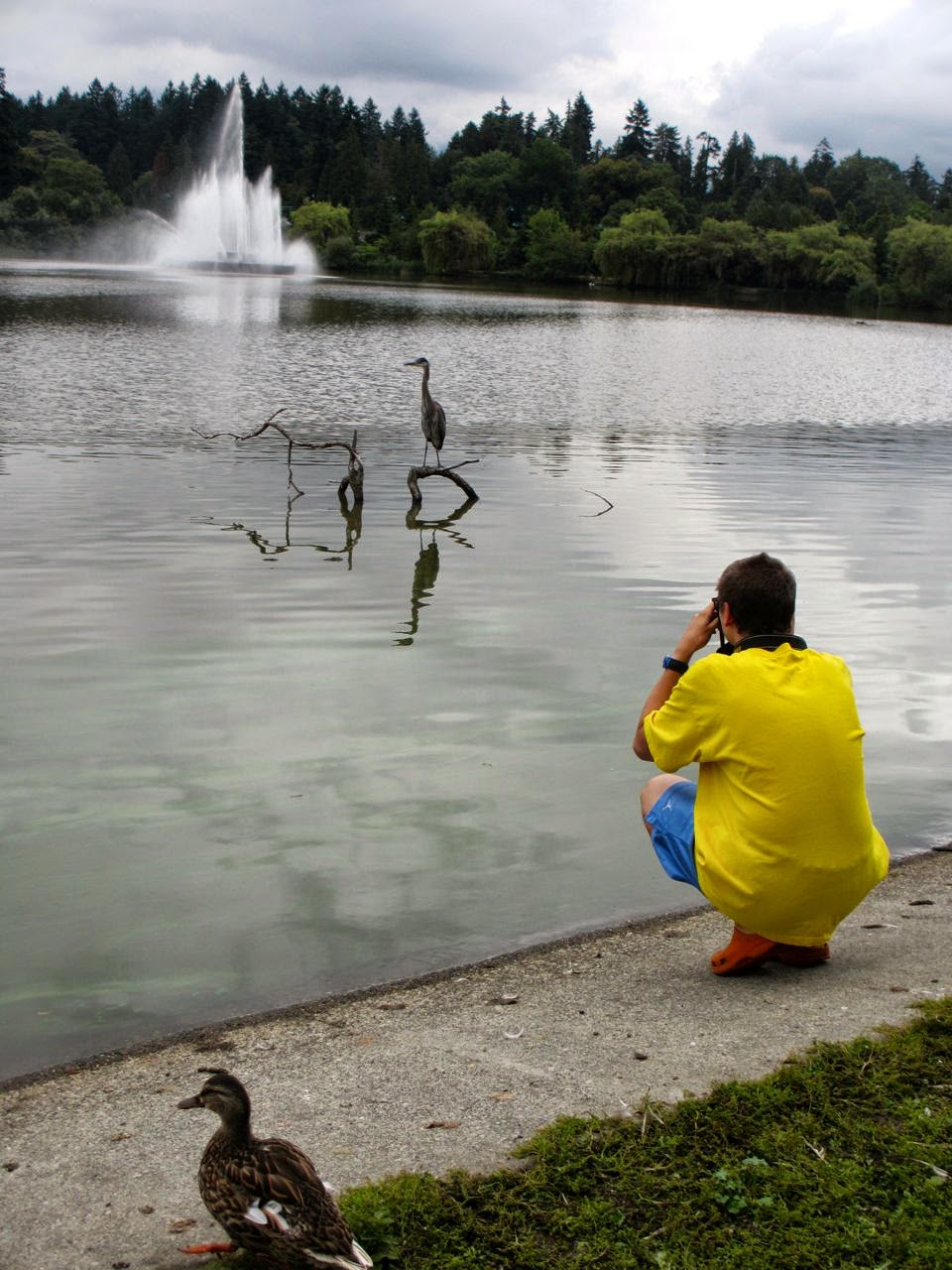 This is where the poor old polar bears lived in my youth. They were always lumbering around here, sometimes jumping off the concrete walkways into the water, where the plants now grow. I thought the powers that be were going to make something modern and nice out of this grotto, but it is sort of intriguingly post-apocalyptic now. 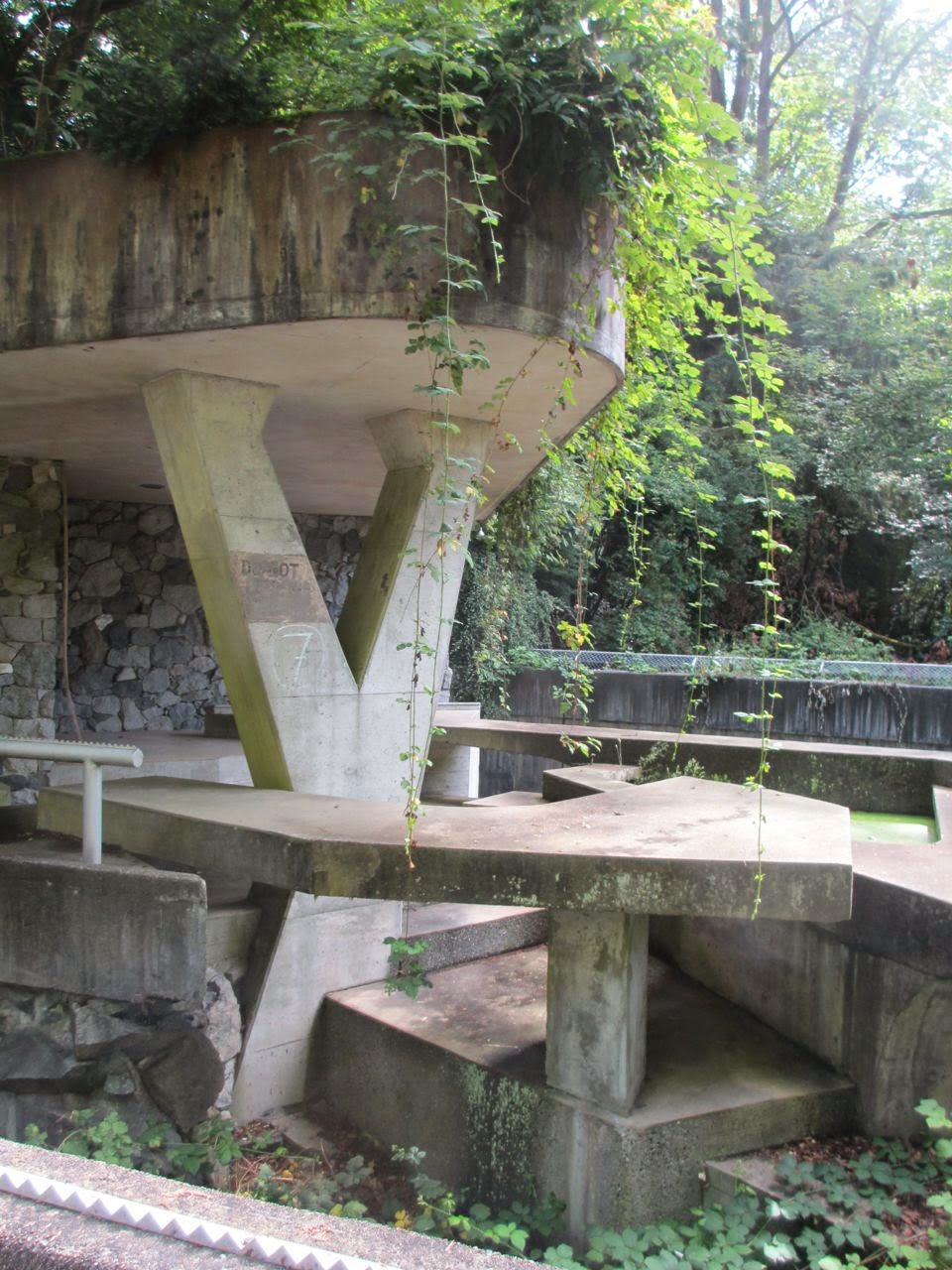 The fireworks show. We did this two nights. I think some people spent hours holding down a good spot on the beach, but as you can see, there is a lot of beach, stretching off into the distance, and so when we got there about an hour and a half before the show, there was plenty of space. 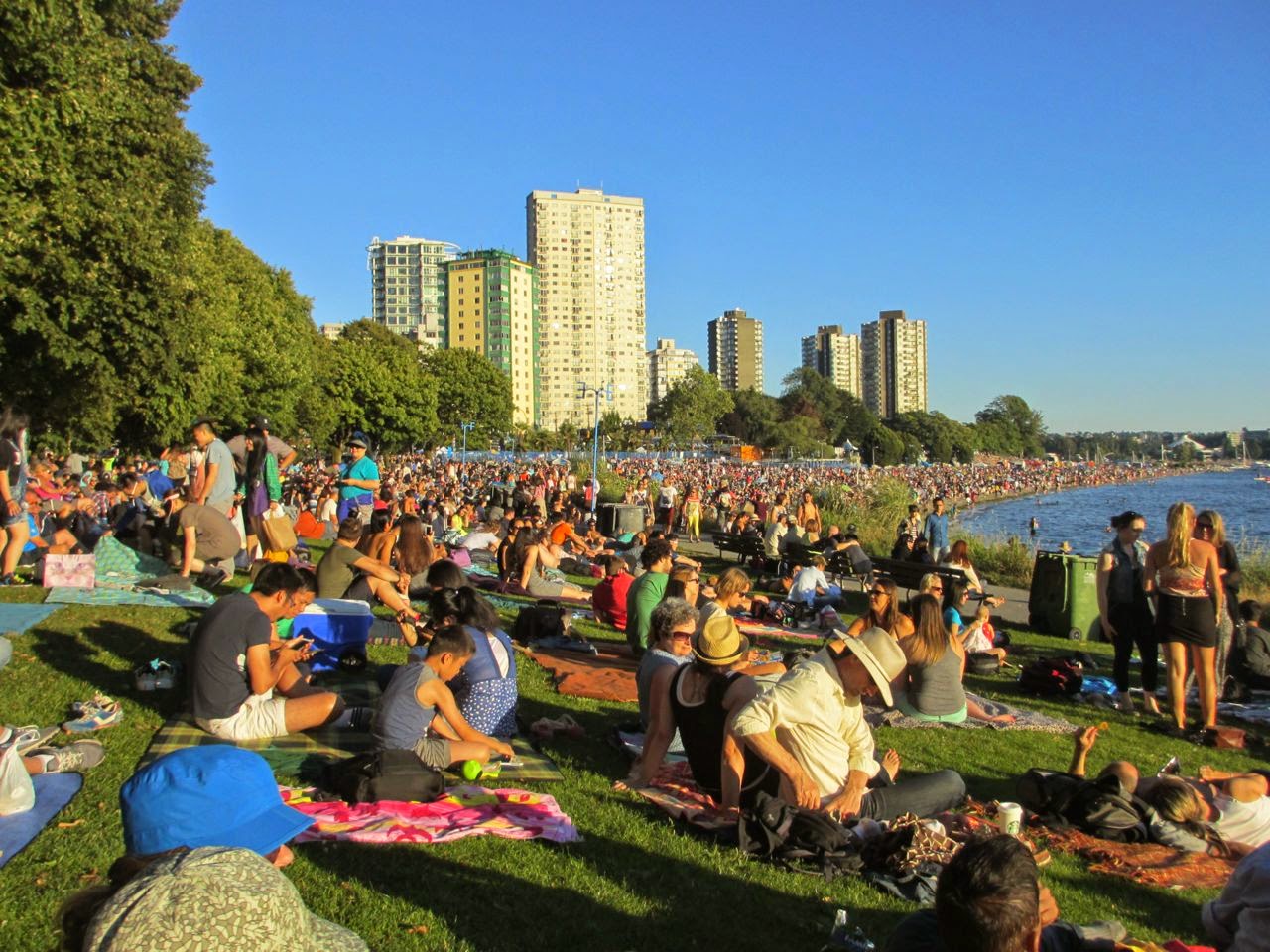 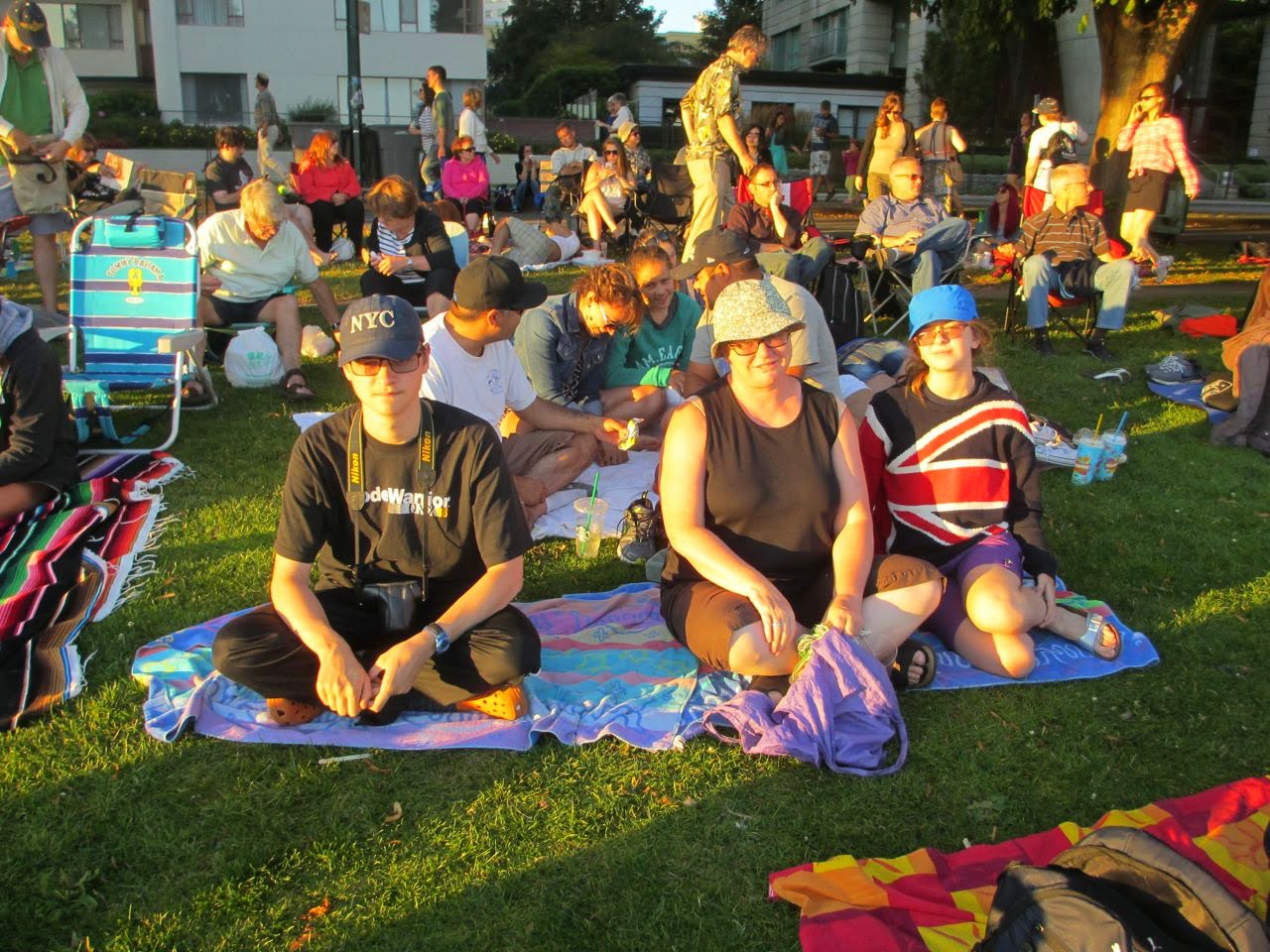 The trouble with trying to take pictures of fireworks. This doesn't at all show how impressive they were. They were shot off of a barge out in the bay, and the booms thwacked us in the chest when they went off! Huge, sparkly, loud, for about half an hour! 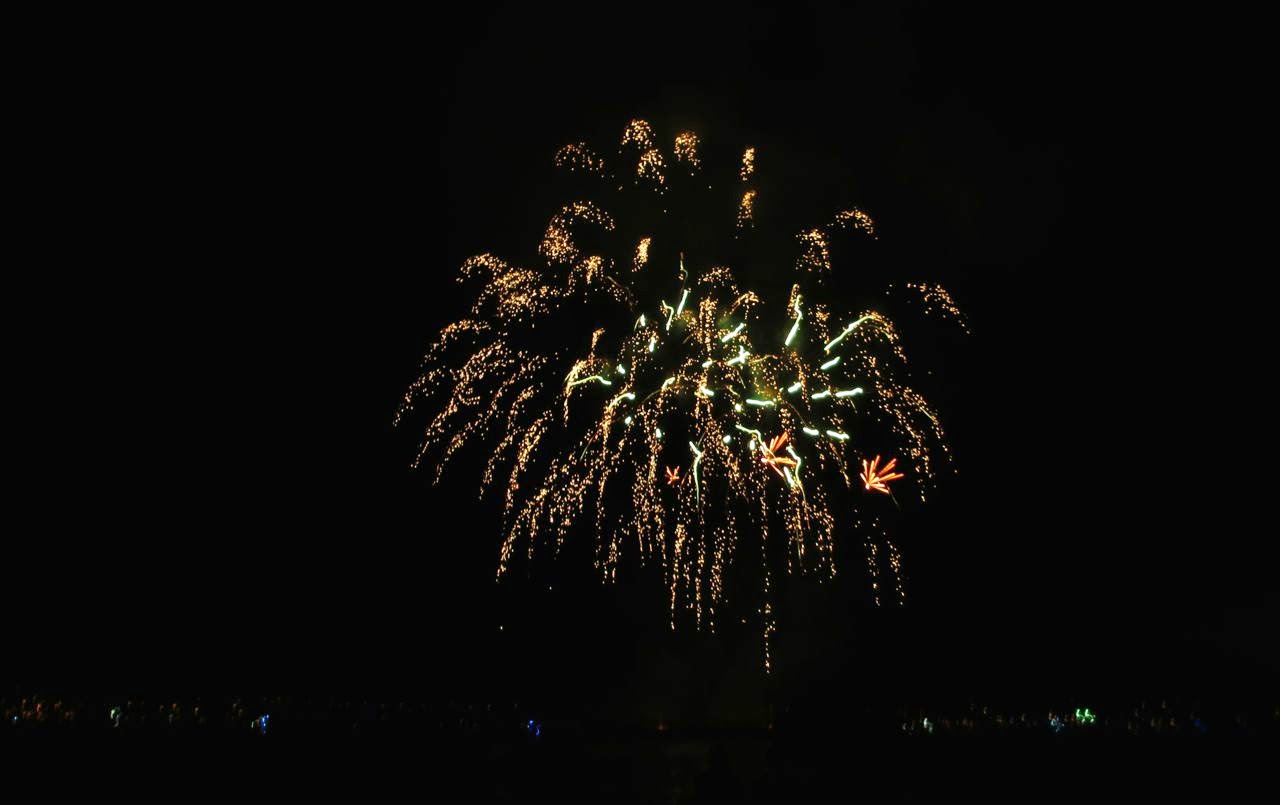 Here you can see the huge crowd heading home after the show. The driver of that car at the right did not heed the warnings about crowds... The night of the second show there were barricades there and no one tried to cross the flood of people, but the first night, a few cars honked their way across when the lights changed. This is out our living room window, and the one wretched thing about this apartment was the chirping of the crosswalk, all day long! 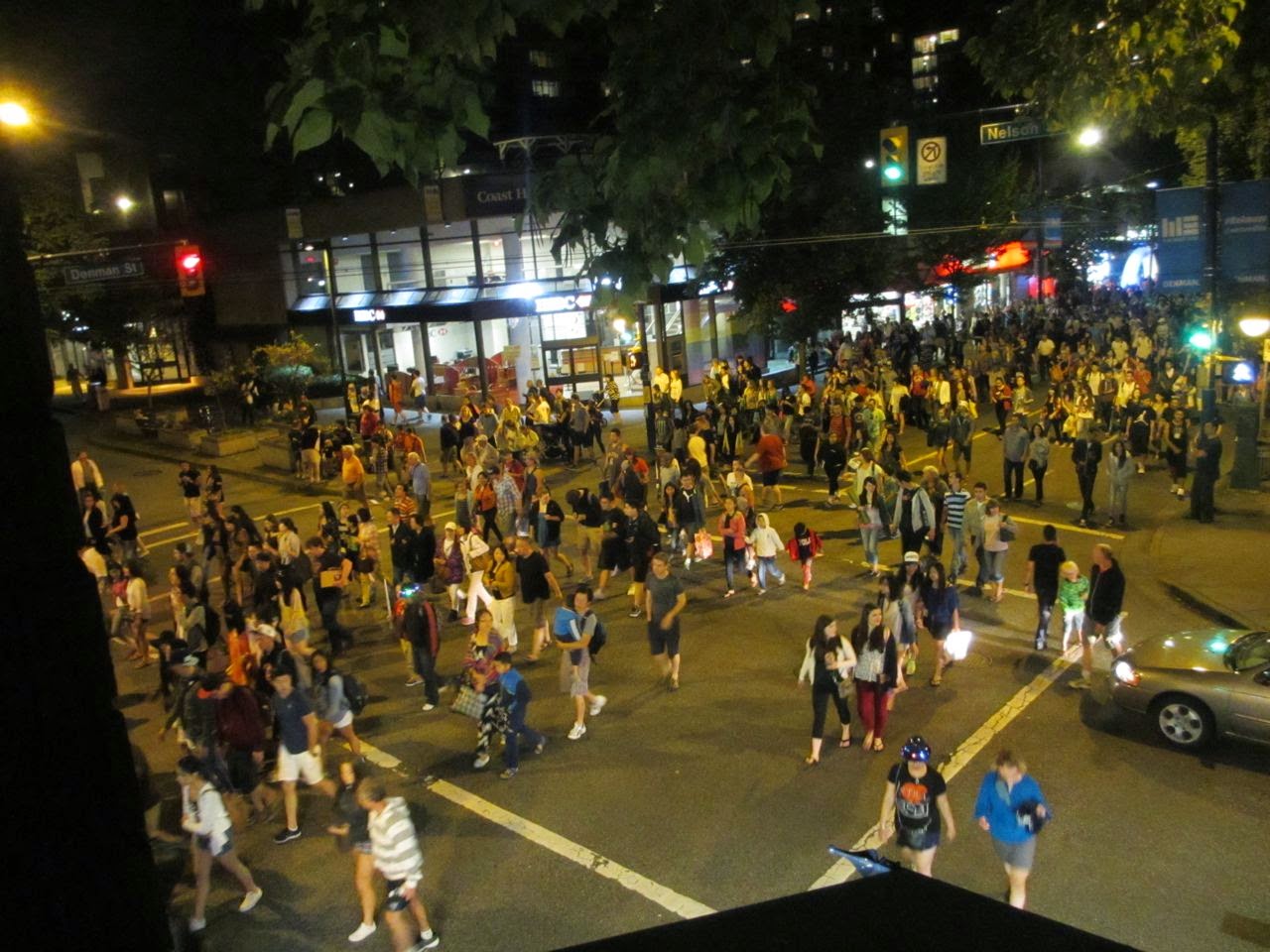 Stephen wearing his Ravelry T-shirt. Hmm, I see these are not in the Ravelry shop right now; it's a collector's item! 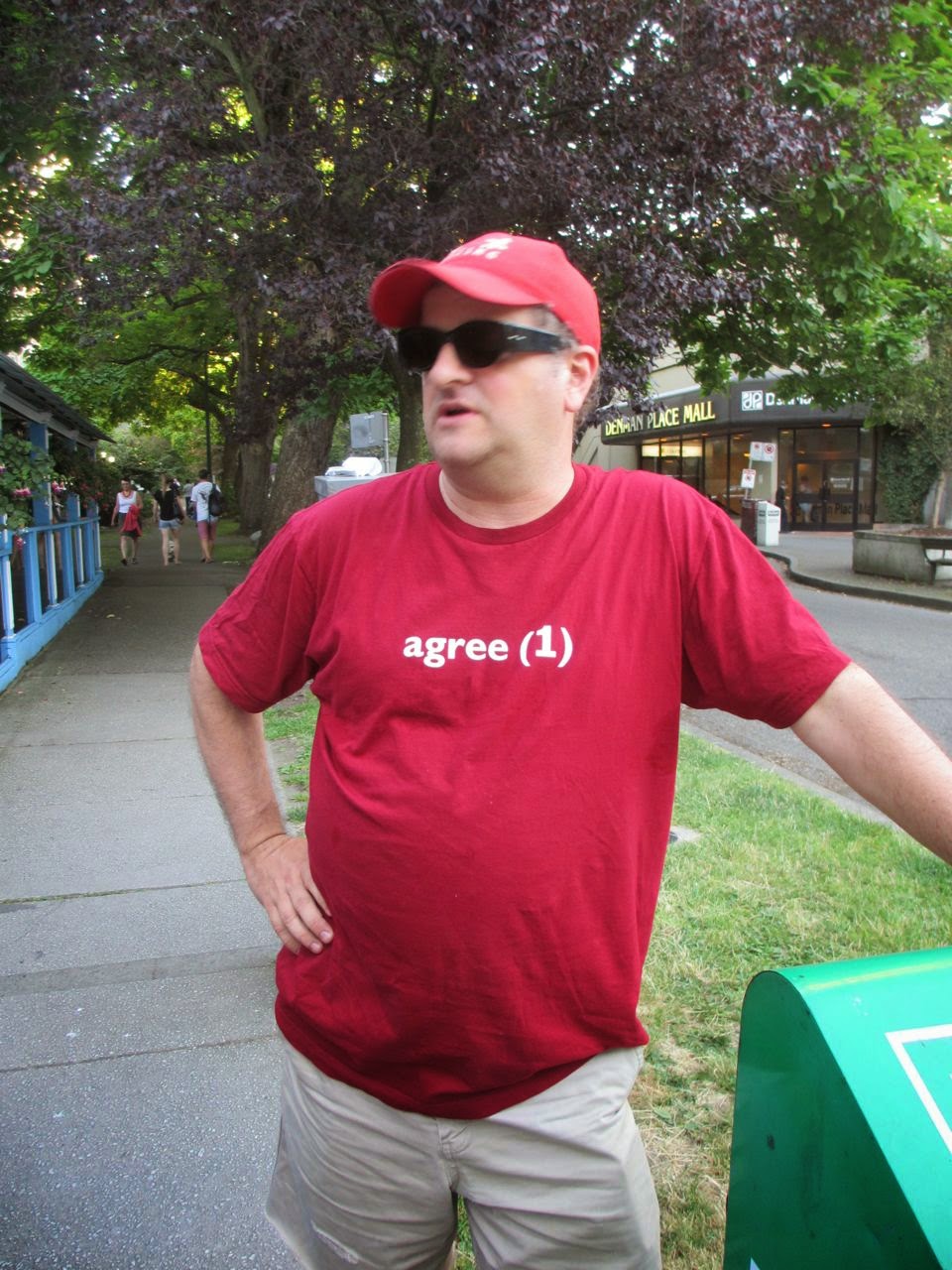 At last, some knitting. This is some grey wool I bought a while ago with some idea about a lacy shawl, but recently a Rav friend was selling some Habu with stainless steel, so I got that and am making a Kusha Kusha scarf. You can also read about the Yarn Harlot making one; I've been keen on this since reading about hers, especially when she mentions the Matrix. 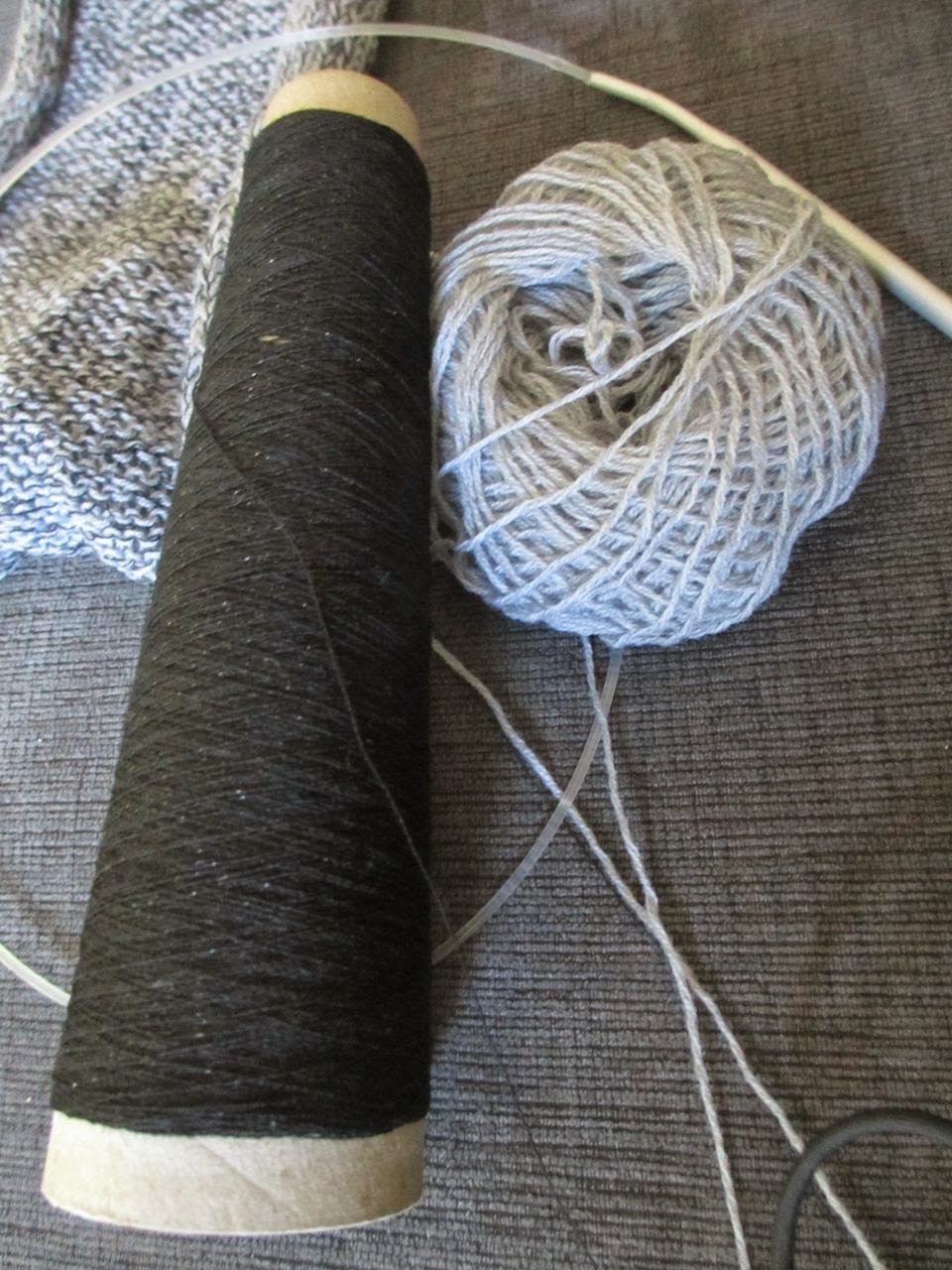 In the Matrix, all the knitting is a bit raggly. So I threw in some dropped stitches, and will have another couple before the end of the light grey wool. (The last bit of this pattern is knit with just the teeny, fine, threadlike yarn with the steel in it.) 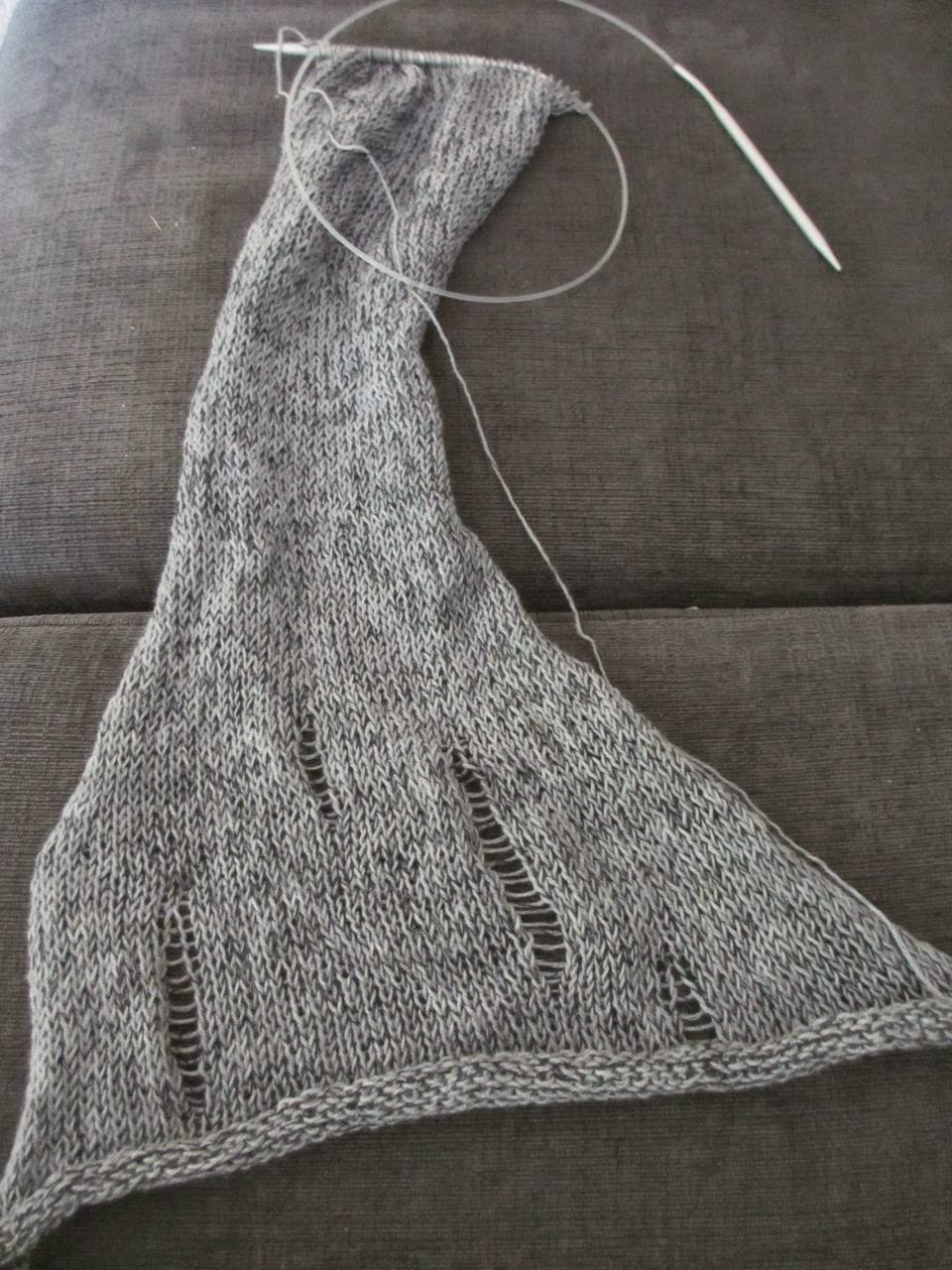 I didn't finish this (although you know I thought I would), nor the socks I took, partly because of this: 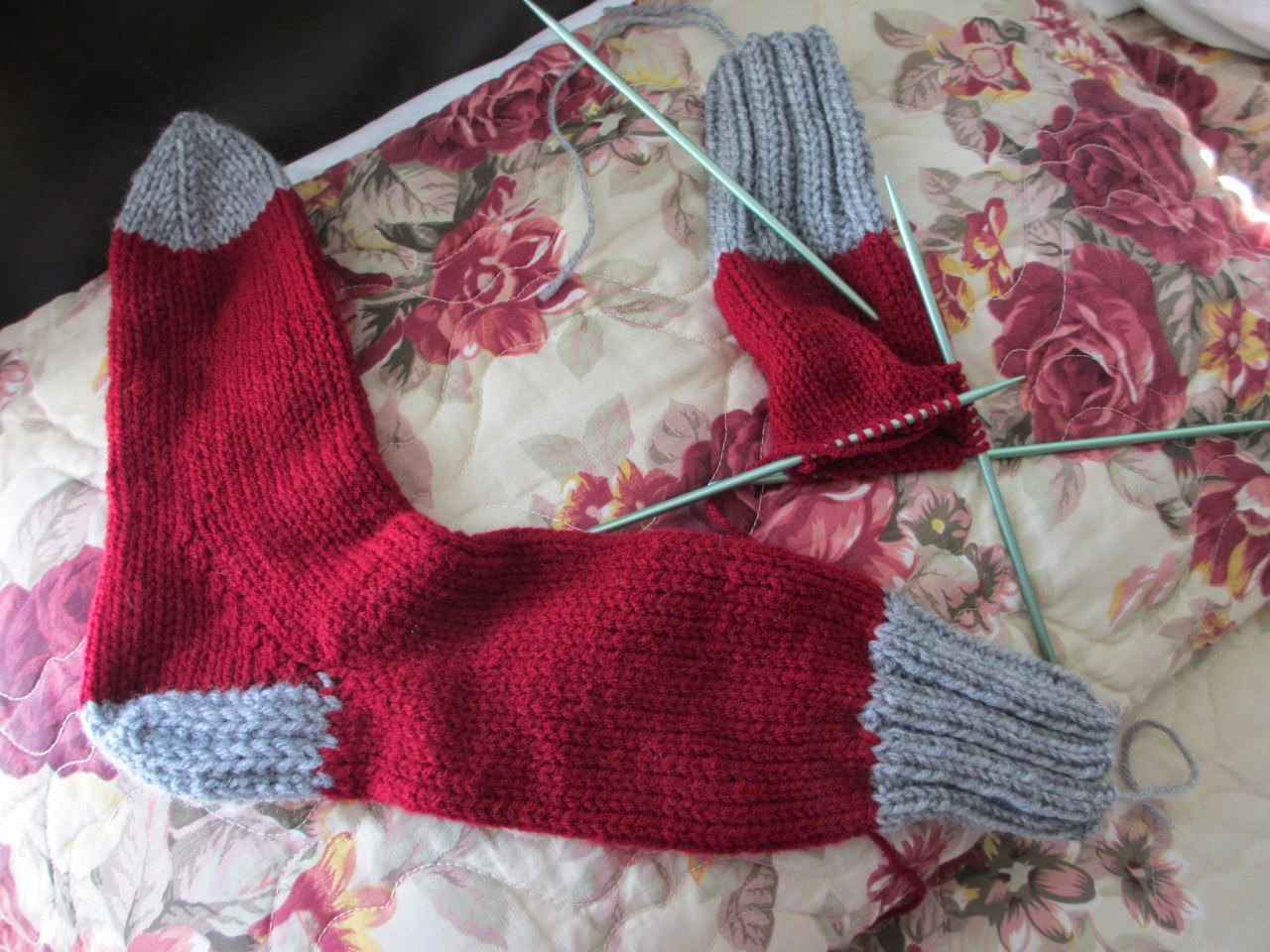 I was in a little thrift shop looking at old knitting patterns, and the nice lady said, "oh, do you knit socks?" and I said yes... This finished sock and the cuff of the second had been donated to the shop. I, of course, had visions of Koigu or at least Regia sock yarn, but no, it was Red Heart. But the completed sock was gigantic enough to fit Arthur, so I really had to take it! My tension was tighter than the first knitter's, so my sock is a bit tight on him, but I figure we can soften it up in the wash and he'll have some winter slipper socks. I did get the second sock done and just need to graft the toe.

I also knit two dishcloths! Those will have to wait, though. 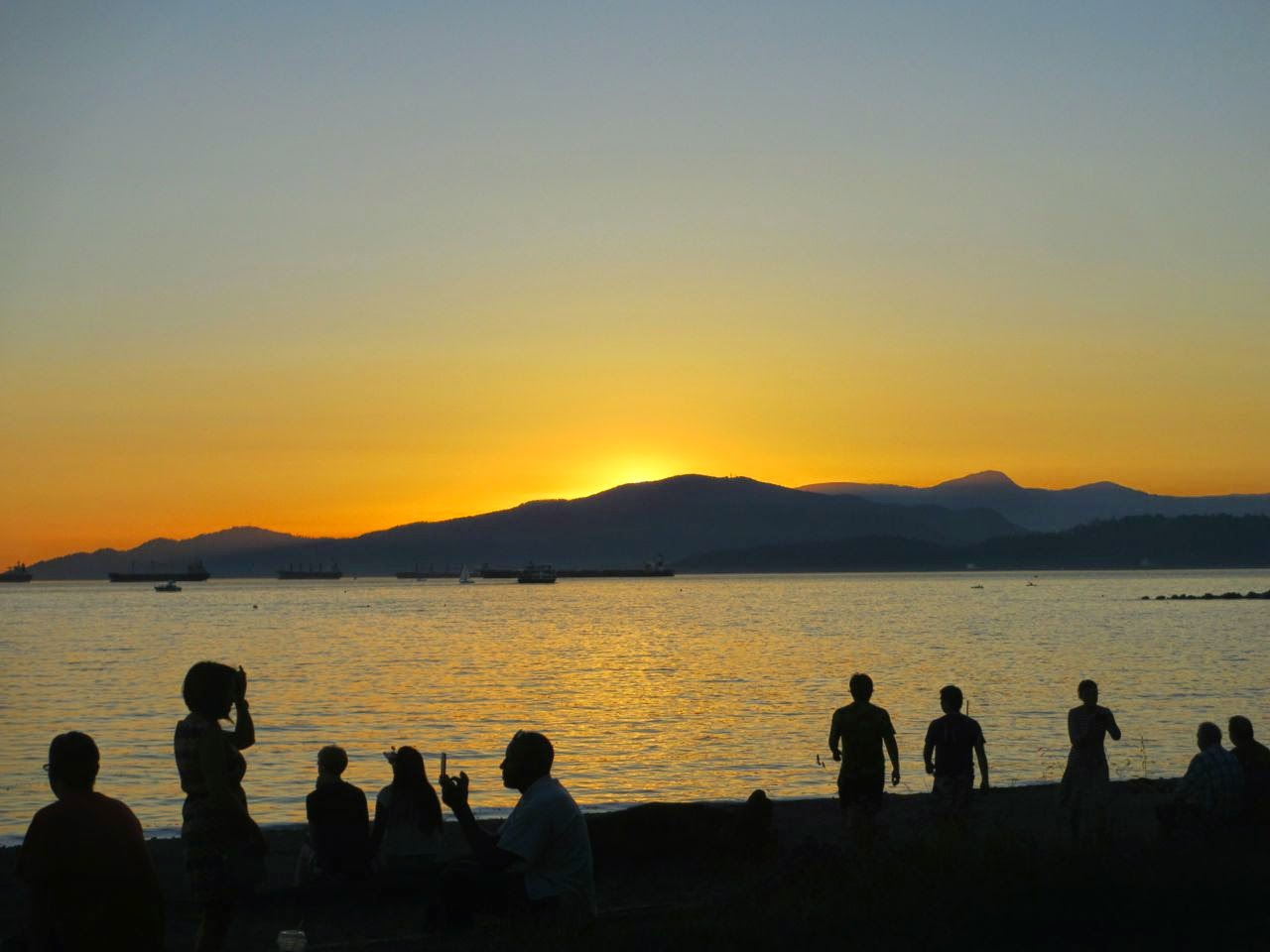 And so as the sun sets in the west, we say farewell to British Columbia, for now!
Posted by Mary deB at 5:02 pm 2 comments:

Away, then back again

The last week of July we all went to Vancouver for some rest and relaxation. Of course, we had things to do and friends to see and relatives to visit and really, we didn't rest much.

We stayed down in the West End, once home to street prostitutes and gays; now home to rich people, some gay, some not.

This is the floor of our lovely apartment, a corner of the living room, I believe. 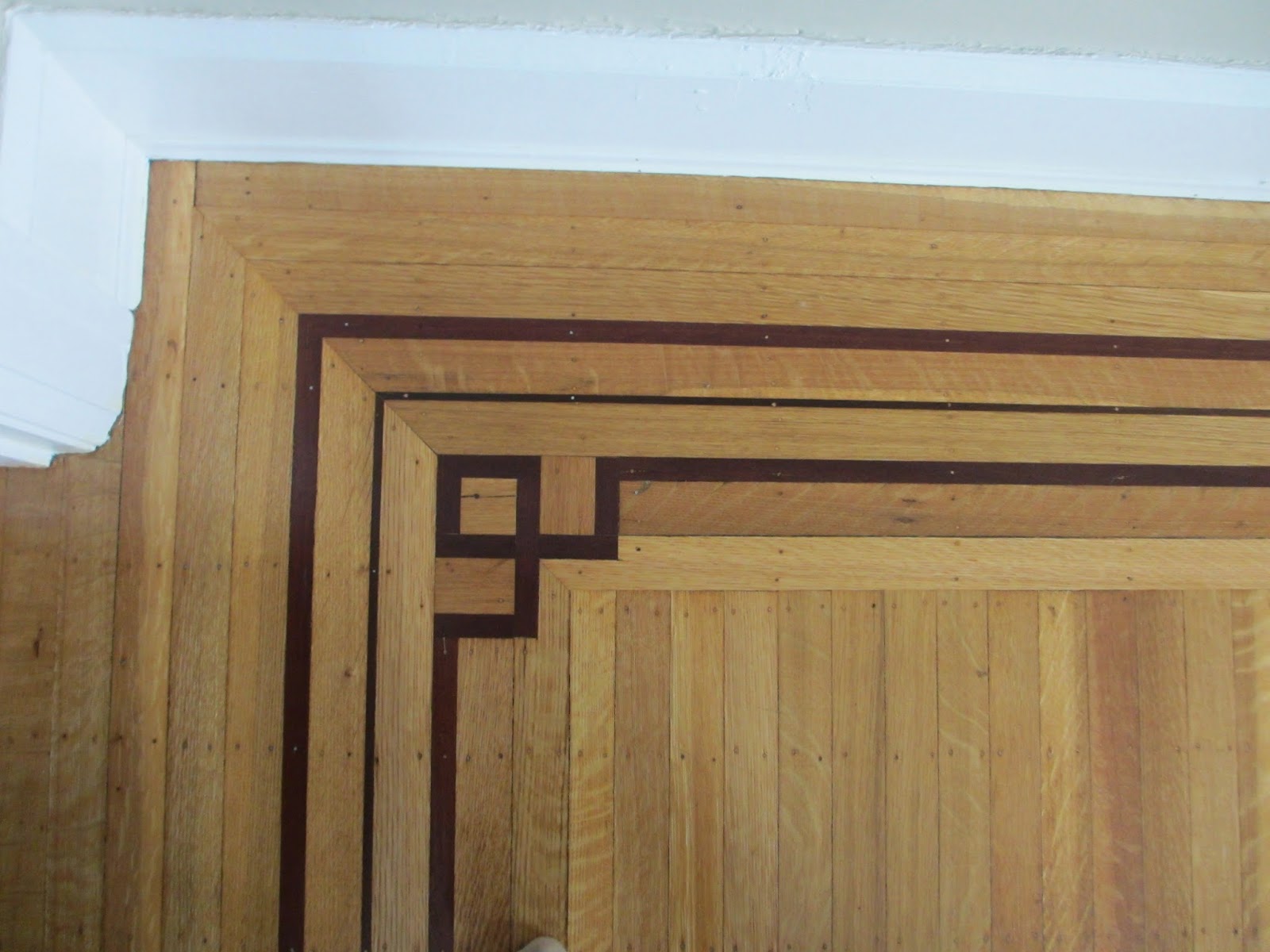 We have the idea that we will retire to Vancouver, specifically to an apartment in the West End with a view, steps from the beach and park. We did manage to hit one open house while we were there, and saw an okay "penthouse" for almost a million dollars. So we could just about trade our family house in Toronto for a sixth-floor apartment with two bedrooms, no basement, no yard...

Real estate ogling was not our priority, though. We saw friends for lunches and dinners; Stephen's mom and sister came and stayed a few days; we saw an electric vehicle show (it's weird watching a guy ride an electric unicycle, which one doesn't need to pedal) and the Science World, where my cousin's daughter works. We walked in the woods of Lynn Canyon and went across the suspension bridge (smaller than the famous Capilano Bridge, and free). We also rode bikes around Stanley Park a couple of times and saw two nights of the Celebration of Light, a huge fireworks competition and show. Lucky for us, we were just blocks from the beach and could stroll down after dinner. The sea of people walked up past our apartment afterwards, for about an hour.

We went past my old house, where I lived till I was about 14 or 15. It looks like no one has pruned a bush since we left it, but lots of houses in that neighbourhood have been knocked down, so I am pleased it is still there. The trees all over the city are, of course, much bigger than they were in 1985, when I last lived there.

We are having photo issues, what with new computers and different accounts and all that jazz, but I think I can leave you for today with Tomas, my great-nephew. His shirt says I Love ♥ BC ♥ Midwives. Yeah, and he's wearing some sort of helmet and has his ninja stick thing within reach. 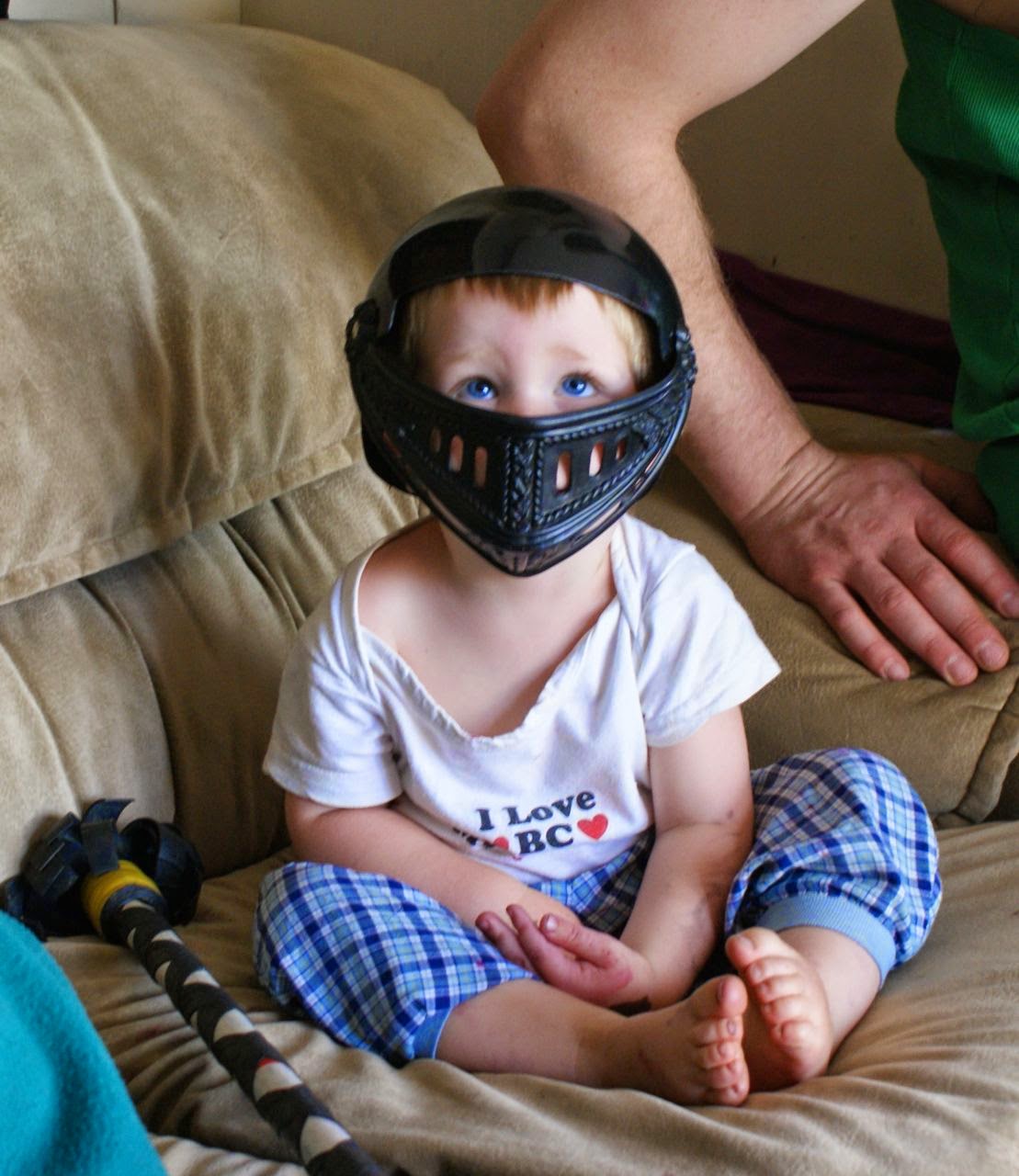 Back soon with pictures of knitting old and new, some pretty scenery, maybe even some fireworks! Now I gotta go find my tech-support guy/husband.
Posted by Mary deB at 11:26 am No comments: