Back to square knitting

I've been absent from Blogland for most of October, but I am back with three more Fassett-esque squares. 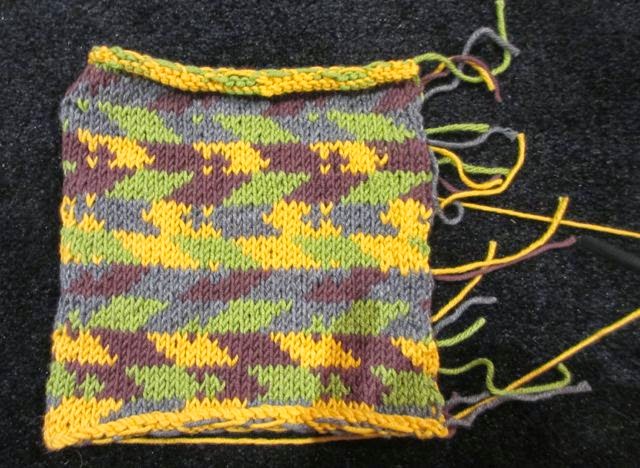 I had thought this would be a nice change, since it's only 2 colours per row, and I knit four rows in each pair. It was still an unholy tangled mess!

Next batch of colours brings in a whitish grey. The Tumbling Blocks pattern was not bad to knit: just blocks of colour, hardly any stranding at all. It looked like a star when I was knitting it, up close, but whenever I see it from a distance it is much more 3-D and tumbling! 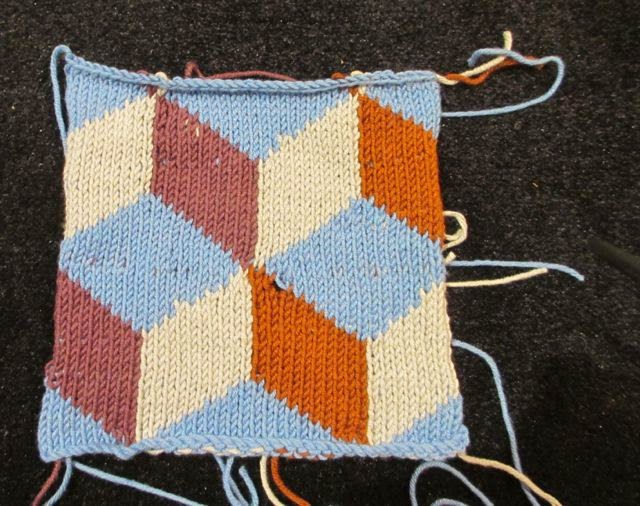 This is Circus Stars: 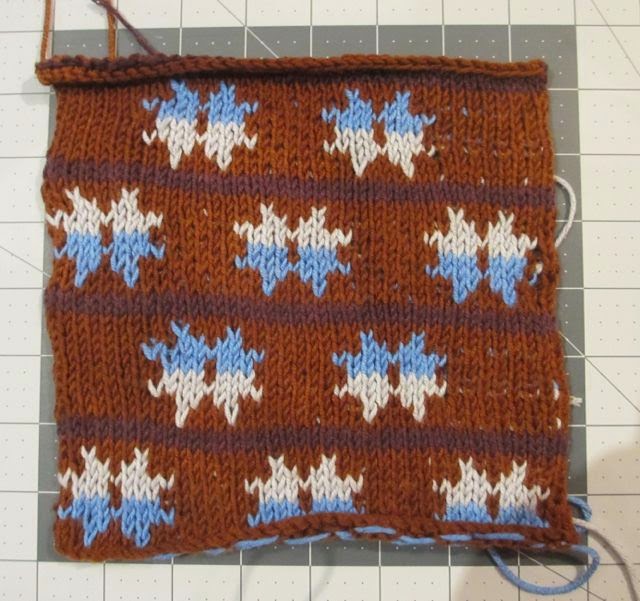 I was lazy and fit the fourth colour in with that narrow strip between motifs, but couldn't be bothered to deal with three colours in the stars. Had to keep it simple.

The whole lot, so far! This is going to be a big cushion if it is 3x3 squares. Maybe I'd better get a pillow form soon so I can fudge where necessary. 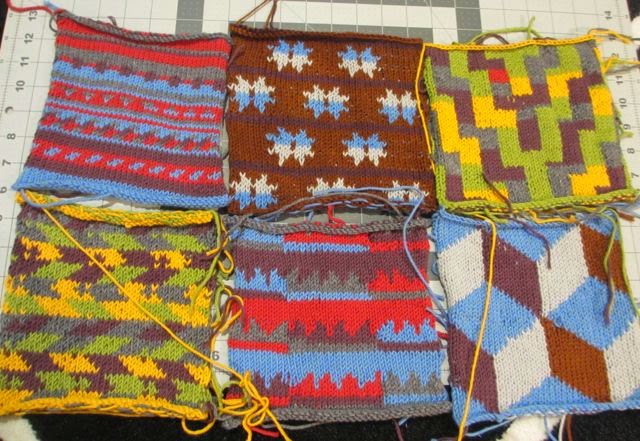 I hope to do NaBloPoMo in November again this year. If nothing happens to distract me!
Posted by Mary deB at 11:55 am 1 comment:

The pattern was released for the Kaffe Fassett knitalong, and it seems Kaffe has been influenced by his years of quilting. The knitting pattern is for squares all the same, with diagonal stripes. Like these, only stripier! (And in stocking stitch, which makes it less simple to make an actual square. People are having issues with the increasing and decreasing.) That will make a nice blanket, but I had been dreaming of old-style Kaffe, and don't want a stripy, quilty blanket. Or cushion, which is what I will make.

So I got out my Glorious Knitting and started at the beginning. Some patterns are too big for these 40-stitch squares, but the Toothed Stripe is one I have always loved. Now I know why I never made a sweater -- so many ends to take care of! 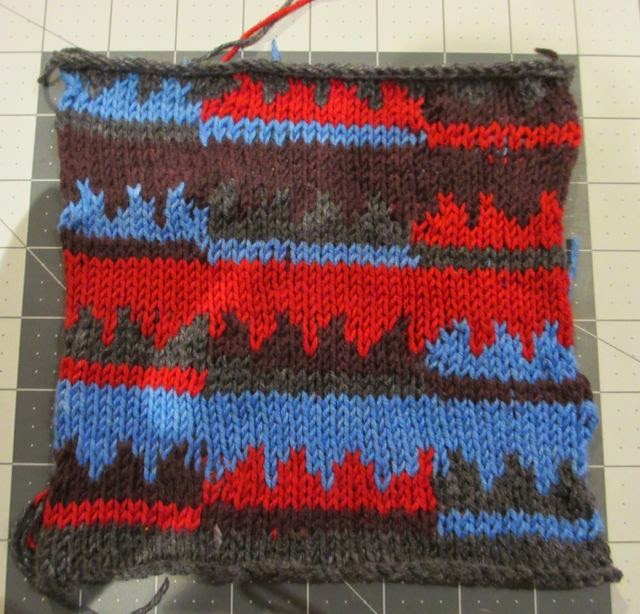 I should have striped those big bits between the rows of teeth, but didn't figure that out till "too late." Though we know with these things it is never really too late.

Since I am not waiting for the knitalong instructions to be released, I moved on to the colours for the second clue: 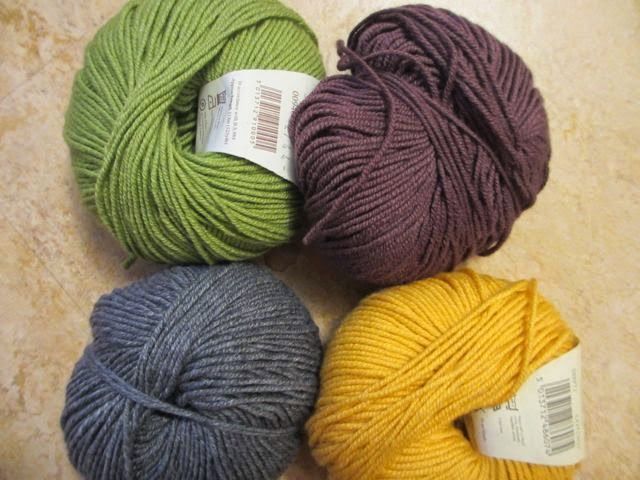 The grey and purple are carried over from the first square and the new colours totally change the look! 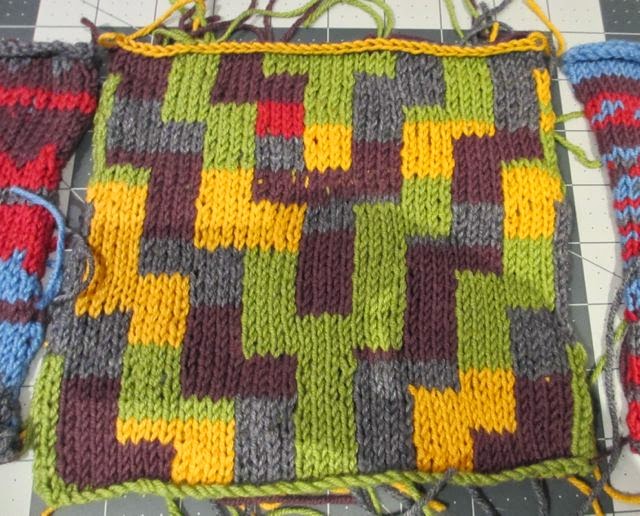 This is Small Steps. So fun. But, oh, my, ends, ends, ends! I could have done it without changing colours so often, but the zillions of colours are what make these designs so great. Imagine doing these "properly" with 20 colours...

One last picture to show you the task which awaits me -- sewing in all these ends! Reason #1 to do a cushion instead of a blanket: I can secure these and then no-one will ever see them. The inside of a cushion cover doesn't have to be as neat as the underside of a blanket! 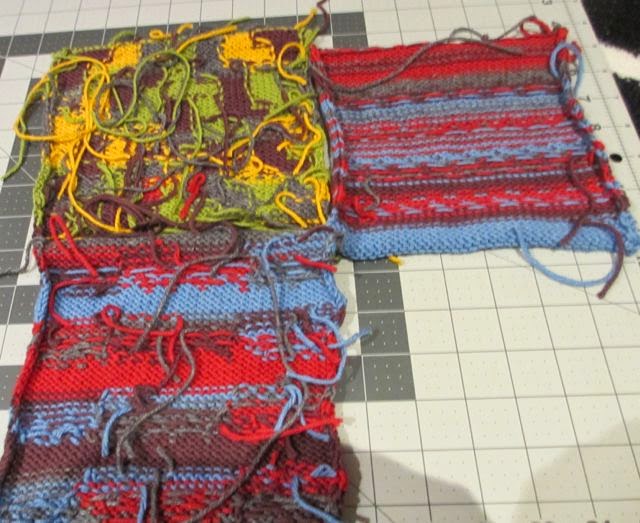 Very scary. For the next square, I will try to do something a bit more horizontal and less bitsy. We shall see.
Posted by Mary deB at 4:00 pm 2 comments: