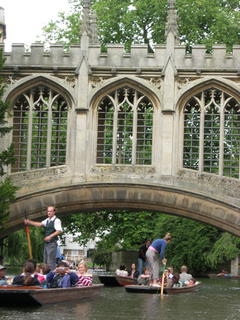 A bit of a traffic jam of punts. 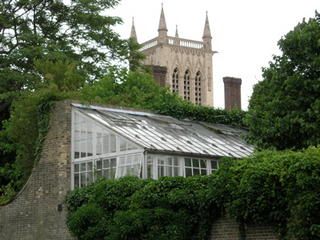 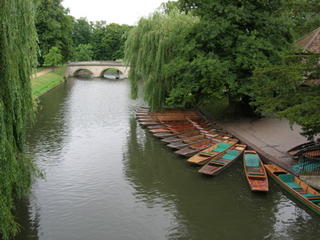 Yesterday we went punting. These are punts. Don't they look peaceful?
It's actually quite hard to stay stable and push the giant long pole down in the river and push the boat along. I did it for about a minute, and the rest of the time my hub did it. Lots of people were out and there were small collisions here and there. I think if we have visitors we could go for the deal where you get a pro to punt you and tell you engaging stories. Some people even had a glass of wine as they drifted along the water. You do get to see lovely things as you are punting along. The green grass, the golden buildings, the blue sky... It is a lovely town, and the sun has been shining lately, which is much preferable to the dribbly rain of the previous few days. The gardens are amazing. Maybe flower pictures next time!
Posted by Mary deB at 6:00 am No comments: 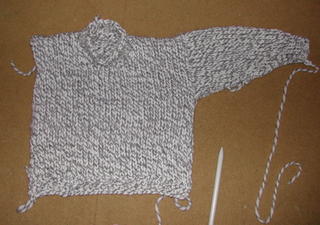 Now I just have to line up the second sleeve to match the first, sew the sides and sleeves, and I'm done. I pick up the sleeve stitches and knit down. That needle in the bottom corner is a 15 mm, and as I went on, I realized I had a 10 mm, which I used for the neck and sleeve cuff, but when I started at the bottom of the back, I just did a bit of seed st with the 15.

Since we don't live around the corner from the grocery store here, as we did in Toronto, I am constantly running out of stuff. Today I'm going to walk to the big Tesco, get a ton of stuff and find a cab to come home in. We did find a little store for milk and stuff nearby, but it's going to be a big change doing shopping for a week at a time!
Posted by Mary deB at 9:48 am 2 comments: 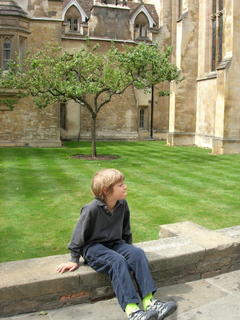 This is a test photo... seems to have uploaded alright. It's the boy-oh in front of Trinity College, with the apple tree descended from the tree which apparently dropped an apple on Newton, demonstrating gravity and all that. So, that was our tourist site from yesterday. Today we saw a second-hand bike shop where we bought bikes for everyone but me. I will get one tomorrow, or sometime when I don't have to supervise small children on new bikes.

I'll see how this works and then show you lots more!
Posted by Mary deB at 3:32 pm No comments:

I brought with me a pink, tiny-needle sweater for my daughter, and I started a sock on the plane but didn't get very far on it, since I was sitting between my two kids who always needed me to do something, and I have the never-ending sweater for the hub, which I just need to sew together and make the button band, but it's been in that state for months.

But, I had to explore around, and found a shop with all sorts of yarn, and the British stuff like Debbie Bliss and Rowan were way cheaper than in Toronto, and wowee wow wow, I found some Rowan Big Wool in the sale bin! So I got 5 balls for 16 pound something, which seems a great deal, and I immediately tossed everything else aside and started a sweater for my son. Two days, 15 mm needles, and I'm almost done! I've been trying to post pictures and have not had great success, but I'll keep trying.

Still getting settled, but we went up our back lane last night and discovered 2 B&Bs, a little store, a car rent place and a pub, so we are fast discovering all we need.
Posted by Mary deB at 8:08 pm No comments:

Here in our house

We made it! We had an uneventful flight -- same old boring child meal we had when flying to Vancouver: spaghetti-ohs and canned peas -- but we got to Heathrow, and made it through the passport line in jig time, since I was just picking up miserable Elaine when an official walked past, and we were sent to the very short People with Miserable Kids line. So that was fast and efficient! Trouped over to the Central Bus Station, where we quickly got a bus to Cambridge. One kid flooded the on-board toilet and the other threw up, but what the heck...

Our house is fine. We will have to be efficient about washing up, and put things away and generally not try to spread stuff all over the place, since it's not a large place, and there are all sorts of English things to get used to -- I finally figured that I not only had to turn the electric kettle on, but flick a switch to turn the plug on, too! The previous tenants here also left a ton of stuff. The coffee filters are appreciated, but the open packages of rice are not! We, indeed, dumped our half-empty rice packages on friends before we left, but we didn't leave them for strangers. Oh well, there'll be a bit of an adjustment period! The neighbourhood is lovely, and we have hollyhocks in the garden and the river just a short walk away. I think it'll be great!
Posted by Mary deB at 4:40 am 1 comment:

Everything is set, we've got the papers, we've bought several new bags to put all the stuff in, we've packed away all my knitting needles! And this afternoon we are really truly getting on a plane for England! I hope the kids (and adults!) will be able to sleep on the plane, as we arrive at 7 am, and then have to take a 2-hour coach ride to Cambridge. And finally, I will be knitting on the Cam!
Posted by Mary deB at 7:06 am 1 comment:

It's in the mail

Yippee! The visas are being couriered to us, and in a few days, we'll be outta here! We just have to tame the piles of junk we brought across the street to our crash pad, and we're set.

We did manage to leave our house spotless and lovely for the tenants. They were impressed, since they'd seen it 48 hours earlier, and it was ankle deep in "miscellaneous." I feverishly did laundry all day.... I know some people have "laundry day" once a week or whatever, and wash sheets and towels and clothes all day long, but I tend to throw in a load whenever the urge hits me, so to be constantly feeding things into the washer and folding things out of the dryer all day long was crazy for me! Meanwhile, clean a bathroom, vacuum a rug, make the kids do all their eating on the porch... Our house in England seems from the pictures to have one bathroom and a small kitchen, so I might even be able to keep up with things!

The visas should take a day or two, so I expect we'll be flying by the weekend! I'll let ya know!
Posted by Mary deB at 2:59 pm No comments:

We have a work permit! It is now speeding its way to Ottawa, where someone will rubber stamp it and send it to us. And then they may or may not ask for more paperwork. Who knows? But there is some progress, and I'm kind of glad I don' t have to get on a plane tomorrow morning. We will get the house spic and span for the tenants, but now we have all day Saturday to do it! We also have more time to sort the huge quantity of stuff we want to take. How can a family of 4 have sooooo much clothing? But then, we don't have as much as many families I know!

Off to sit on the nice big shady porch across the street -- we will have tenants moving in here, and we will crash at a neighbour's house!
Posted by Mary deB at 4:37 pm No comments:

Getting the hang of this 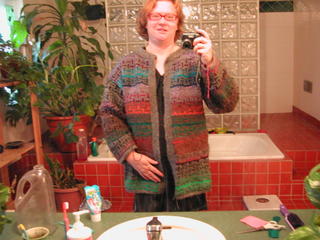 This is a picture taken earlier this year of me in my Kureyon/Lopi light cardigan. It's from a VK from a few years back. Must learn more things, like cropping pictures (and taking pictures without the toothbrushes and junk...)

We are not quite on the road yet here. We're meant to leave for England next Saturday, but if we don't get our visas and stuff in time, we will have to postpone a week or so. Which complicates things immensly.
Posted by Mary deB at 7:22 am No comments:

This blog is meant mainly for my family and friends while I am in England. I hope to write lovely things about our new home, and I also hope to chronicle my knitting! I am taking with me a big secret project, which I think will keep me occupied for quite a while, and I am sure I will find socks and hats to knit when I get bored with that!

Right now we are in packing mode. We leave in a couple of weeks, and are furiously packing and cleaning to leave our house with tenants for the year. It's amazing what one finds: 75 Deutsch marks, now more or less useless, were being "saved" in the kitchen cupboard; a thingy on which one can put sneakers in the dryer (I think) was finally tossed, since we haven't used it in the past 13 years; and the huge quantity of knitted hats is now obvious for all to see, since we've sorted the stuff in the front hall.