My Clapotis is done. I ran out of my little balls of yarn just before the end, so I used leftovers from my mittens. 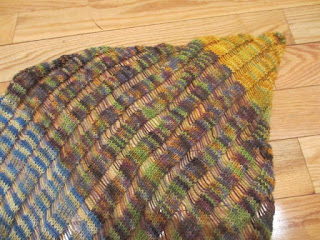 Bluish bits in the middle part. 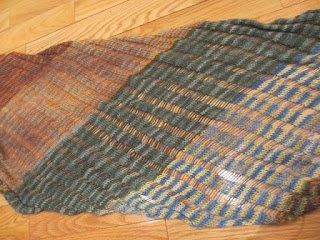 It's huge, though maybe you can't tell from here. 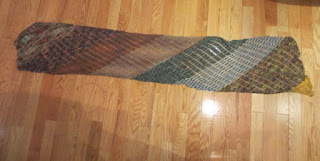 It's very light and drapey, and even though the colours seem a bit nuts one by one, I really like it all together, scrunched up around my neck or lightly covering my shoulders indoors.
Posted by Mary deB at 2:27 pm 3 comments:

The other day I went to a favourite spot, the Textile Museum. They are showing an exhibition of hooked rugs, called Home Economics. Astonishing! Let me just show you a few pictures, in no particular order.

I was sure this was modern, but no, early 20th century. Kaffe Fassett could have made it. Wonderful colour and pattern. 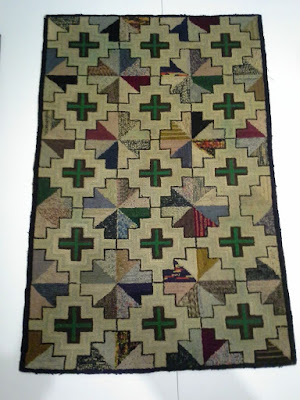 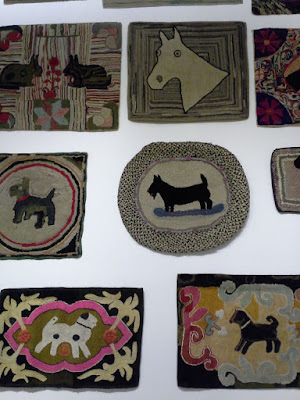 There was a wall, two storeys tall, full of animals on rugs. Dogs, bunnies, horses, deer, birds. On the right in the picture below you can see lobsters in a chequerboard. 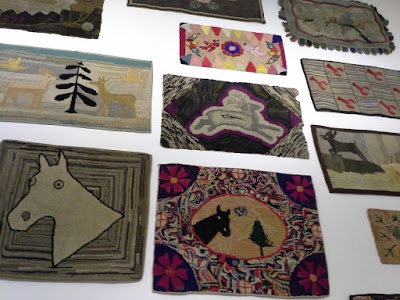 The one below was under glass so there are reflections of the overhead lights. It was made by Emily Carr. The blurb said it was taken to England from Victoria by a family who kept it for 100 years, before it was put on Ebay! 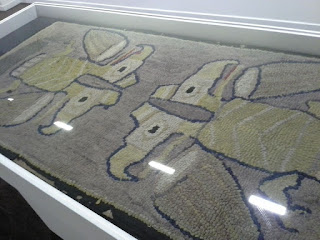 I actually started this exhibit at the wrong end, so this modern rug by Barbara Klunder was the first that I saw. It shows Canada's national heroine, Laura Secord, and her cow -- I'm sure she wore clothes while running through the woods to alert the British about approaching Americans. It's quite fantastic. 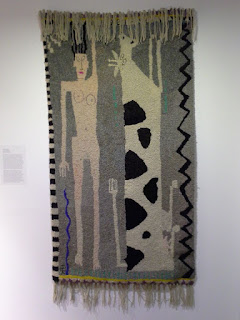 Another fantastic rug. Look at the colours of the ocean. 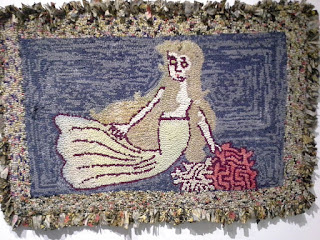 Now this... This is not a modern rug, but another from the early 20th century, around 1930. I would guess it was made some time after the popularization of photography! 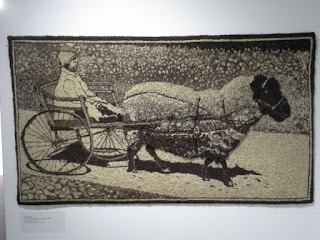 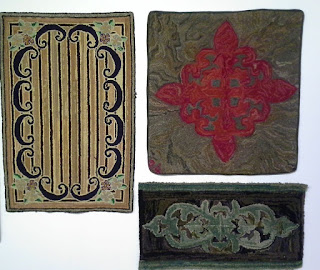 Just some wonderful stuff. In the top right above, the background is sort of "marbelized" with different browns. 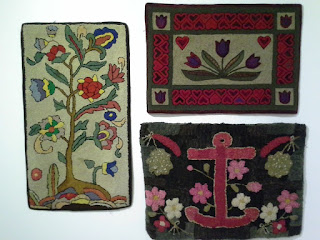 I can imagine how delightful it would be to get up on a cold morning and step onto a hot pink rose-strewn-anchor rug.

This is a modern piece, telling the world that craft is inherently utilitarian; most of these pieces were made just to keep feet off cold floors and brighten things up a bit. 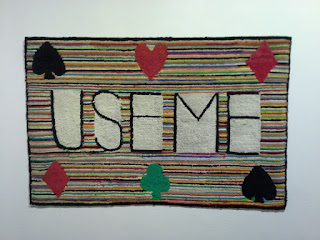 What have I gone and done now? 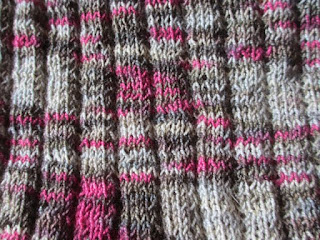 Sometime last fall I bought a bag of wound-up fancy sock yarns, no labels showing. The yarn I used for the balaclava and hat were in the same bag. 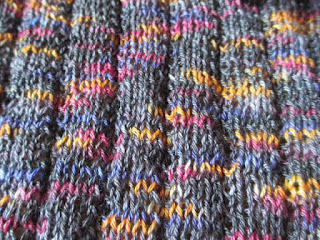 There are seven balls, five with labels tucked inside the centre-pull balls. Actually, there might have been other labels, that fell out of the balls, and since I couldn't tell what was what I may have just tossed them. There's a dim and distant memory (from a month or two ago). 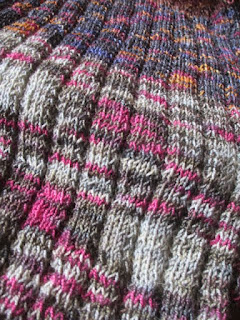 I have started to make a Clapotis out of these seven balls. That should turn out to be about 700 yards, surely enough to make a gigantic scarf. 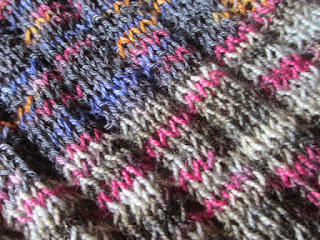 They seem to all be from the Unique Sheep yarn company. Little taster-bits of 25 grams each. The pinky-grey is also a bit green in some lights, and is called Japanese Garden. The charcoal with splashes of pink and orange and purple is called Fireworks. 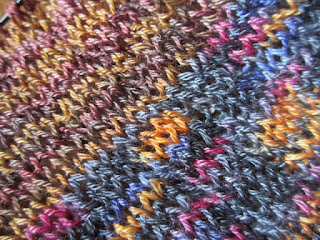 Now I have started on an unmarked ball of various browns. Very silky, very brown.

I'm one ball away from half-way done, if you know what I mean. I do like the look of a Clapotis, and this is the first time I've made a full-sized one. (I did make a narrower scarf once.) It'll be done in no time, right?

Show off -- a Christmas sewing project

I made Elaine a tote bag for Christmas. It's purple! 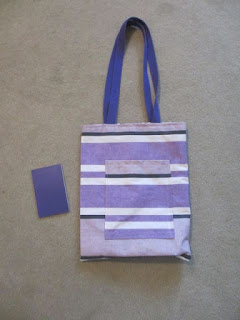 Nice big pocket on the outside, for, you know, the map of Paris or the paperback On the Road. And a little purple notebook for those jottings one must always be making. 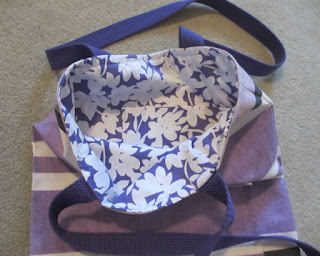 Exquisitely lined in more purple. There's also a cell-phone-sized pocket inside. Not shown: the ultra-clever strap with a key-ring on a clip -- no more fumbling around for keys.

The most exciting thing of all is the little pouch with an actual zipper! 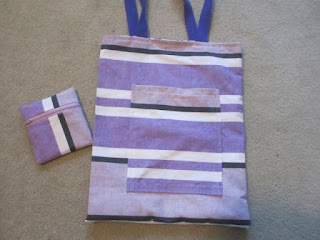 I watched a Craftsy class about bags and zippers, which was quite good. I wish I had watched it before buying the zipper, because it tells you to just use the middle part of the zipper, not bothering with those pesky end bits. If I'd known about that, I'd have bought a longer zipper, to make this just a wee bit bigger. 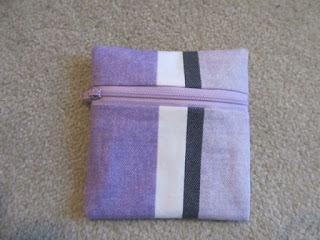 It is just about the perfect size for all those little things young ladies have to carry around with them. And so clever!

Next sewing project might just be pyjamas. I bought fabric and pattern months ago, but am slightly hesitant to do anything other than just straight lines! Meanwhile I have cast on for ... three or four new knitting projects. New Year's startitis!
Posted by Mary deB at 4:16 pm 1 comment:

Showing off another FO

Another wee hat for 1000 Stitches for Syria. This is also made from odd bits of sock yarn, 80 stitches, 4.5 mm needles. Apparently this pink had quite a bit less yardage than the black and white did, because the hat's just about 6 inches high, and I used every scrap. The last few decrease rows were made with yet another yarn. 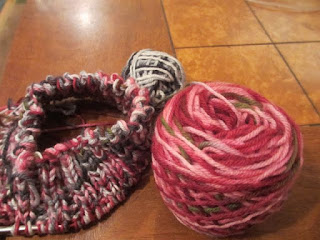 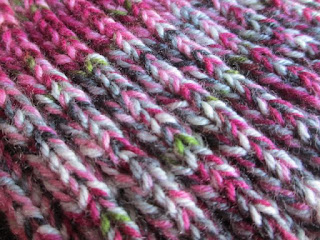 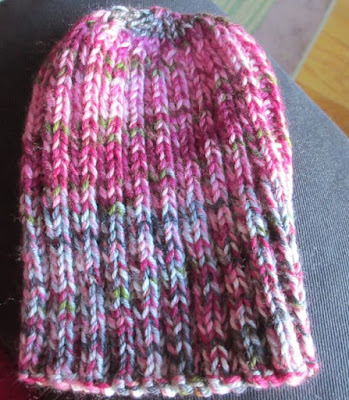 I'd like to go off to the LYS to drop these off, but my foot hurts! I didn't tell you yesterday about my misadventure in the hotel swimming pool... I was getting in the deep end of the little pool by going down a ladder, thought the deep end wasn't very deep, and stepped down... into nothing! My head went under and my foot, flailing around for the bottom, landed crookedly. I sort of have a bruised baby toe, which sounds ridiculous, but which actually impedes normal walking quite a bit! (Also, it is finally super cold: -15ºC today. That might have something to do with it as well.)

Might sit around with my foot up, might venture out. We shall see.
Posted by Mary deB at 10:47 am 2 comments:

Back again for another year...

We spent New Year's at a ski resort here in southern Ontario. Those of you who follow the weather here will know that is a ridiculous thing, since it has hardly snowed this winter at all.

They did have a few cold days when they could make snow, so there were a couple of runs open, but there was not enough natural snow for tubing, no ice for skating on. And of course, the "hill" is not really up to BC skiing standards. Which is all actually okay since I haven't skied for years, the kids are moderately interested but you can't do much in one day, we don't own any equipment, etc, etc.


So we watched people ski, we played some board games and ate some chips, we listened to the pop radio station they play all day long to the lift lines! They did have a great fireworks display at 10 pm on the 31st, which we could see perfectly from our "slope-side condo." 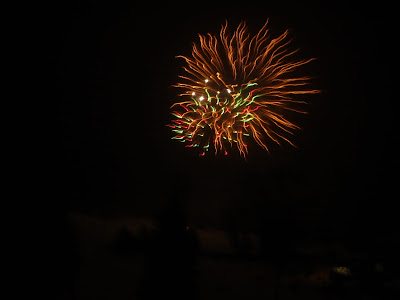 But then, sadly for us, the party continued till 2 am in the pub, and we could hear the whole thing.

Of course, I needed car knitting, even though it is less than a two-hour drive from here. Everything I have, as always, is at a point where I should have the pattern with me, or I need to think a wee bit, so I started something new.

I'm not sure if I showed you the yarn I got at a Textile Museum sale in the fall. I got a bag of 8 or 10 little balls of leftover sock yarn. Some of it is pretty fancy wool/silk/alpaca, but there were two balls of pretty ordinary stuff, black and white mottled. It was wound, but I imagine there was most of 2 50-gram balls.

I held the two strands together and cast on 80 stitches on a 4.5 mm circular needle. The fabric turned out to be not as dense as I might like for a hat, but we were zooming down the highway when I found that out and there was nothing for it but to carry on. (As it turned out, 80 stitches was not quite enough for an adult-sized head, either.) 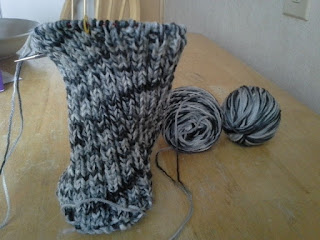 Two-by-two ribbing till it was long enough for a hat, and I still had quite a bit of yarn left.

So I continued on to make a balaclava. (Cast off half the stitches, rib three rows, cast back on again.) For maybe a 10-year-old. 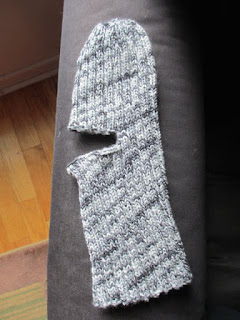 You can see it is a tad tight on Arthur. 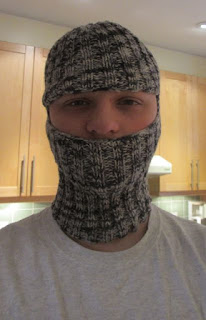 Ah, and looking at my phone pictures, I see I did get one of Arthur in his new hat! Photo-bombed by his dad... 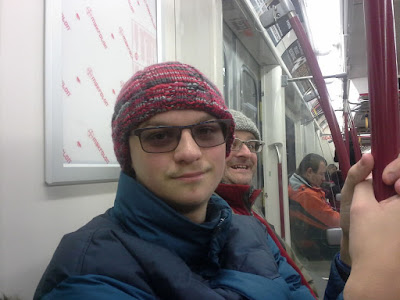