What a lot of stitches

Well, I do still have to sew in a dozen ends, but I'll get to that this evening. 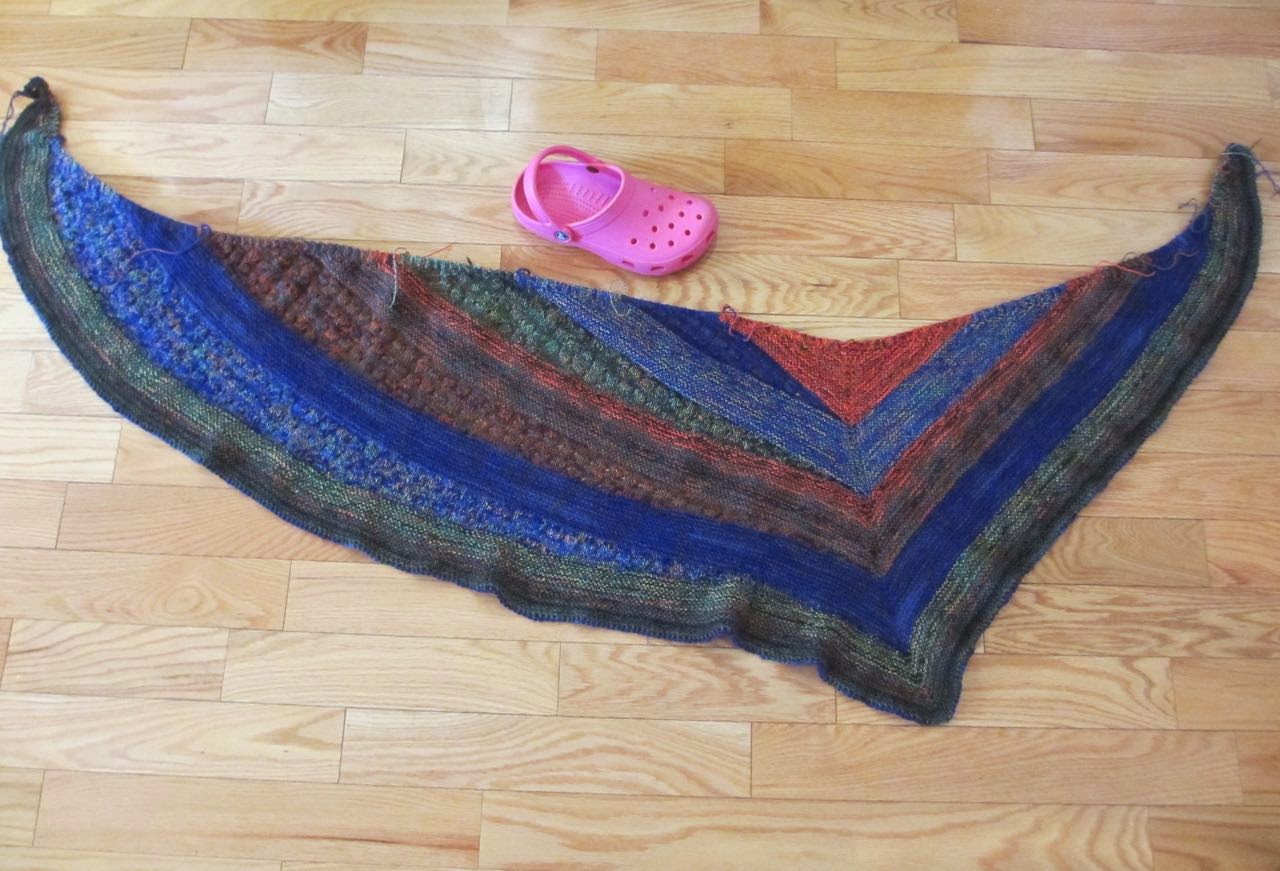 That is not a baby shoe, but a proper size 7 or 8 adult shoe. Kind of a long wingspan, which is great! 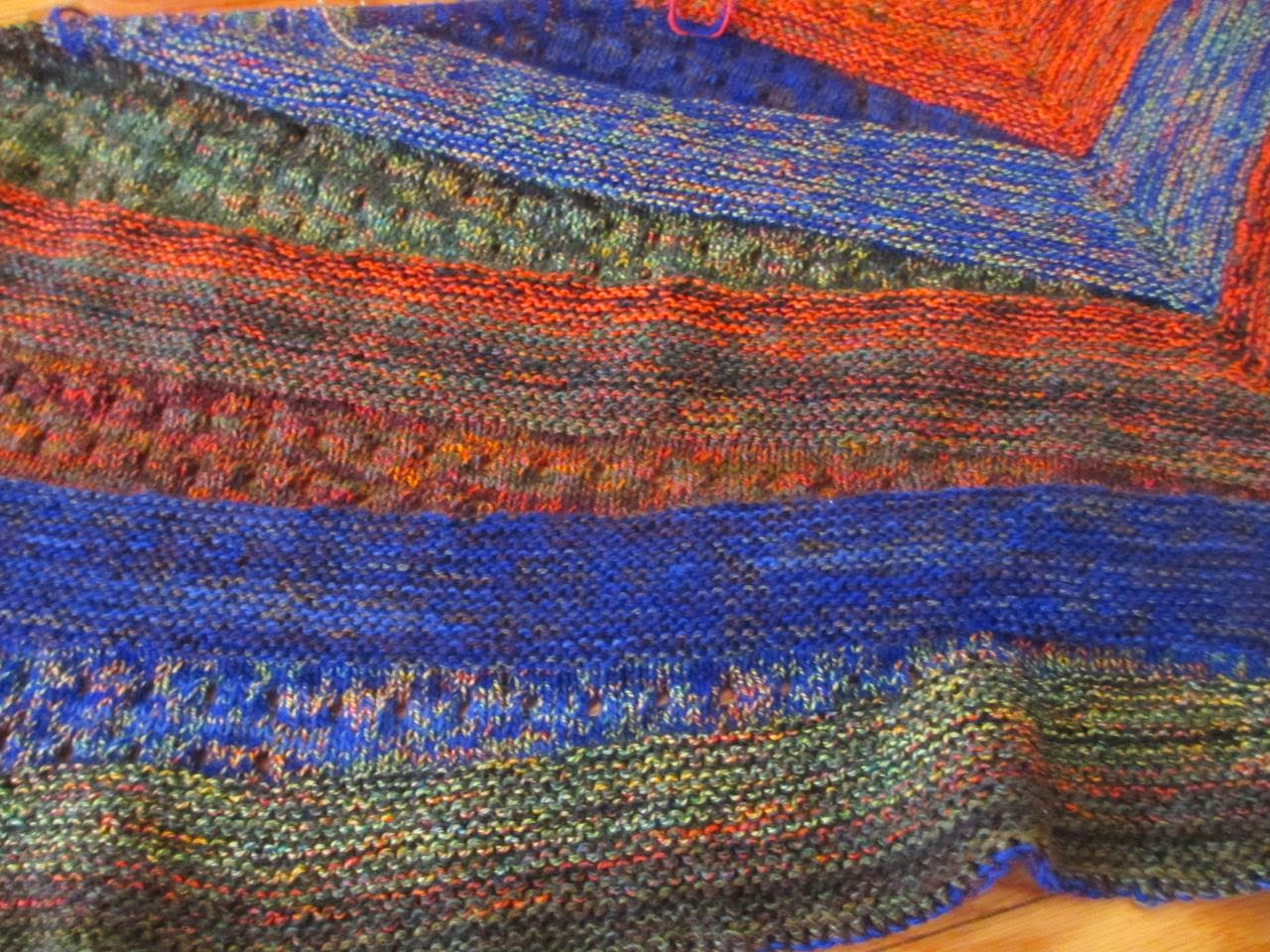 Wedges of stocking stitch with a few eyelets to add excitement. 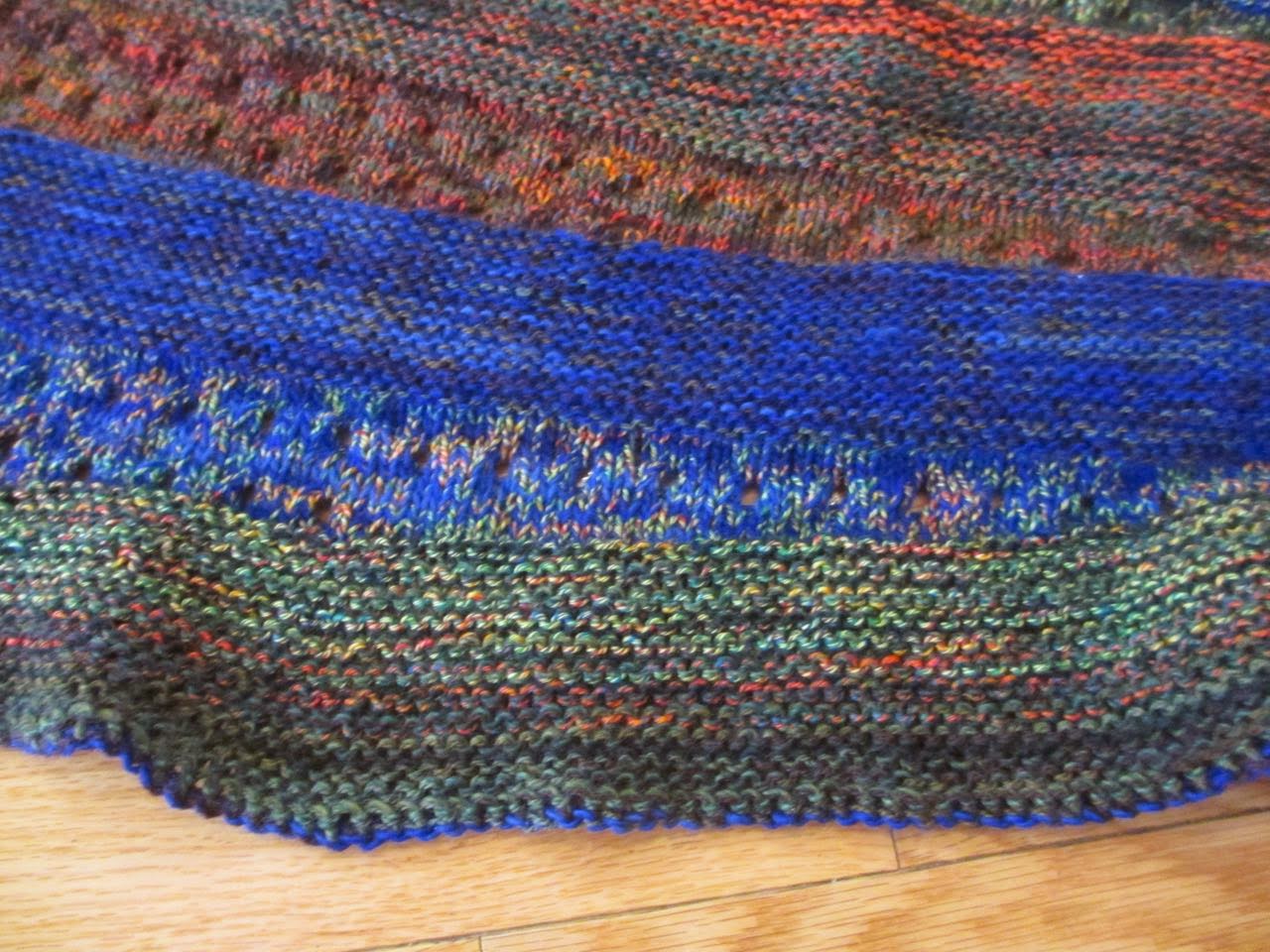 The last garter stitch chunk used up last bits of all the colours. 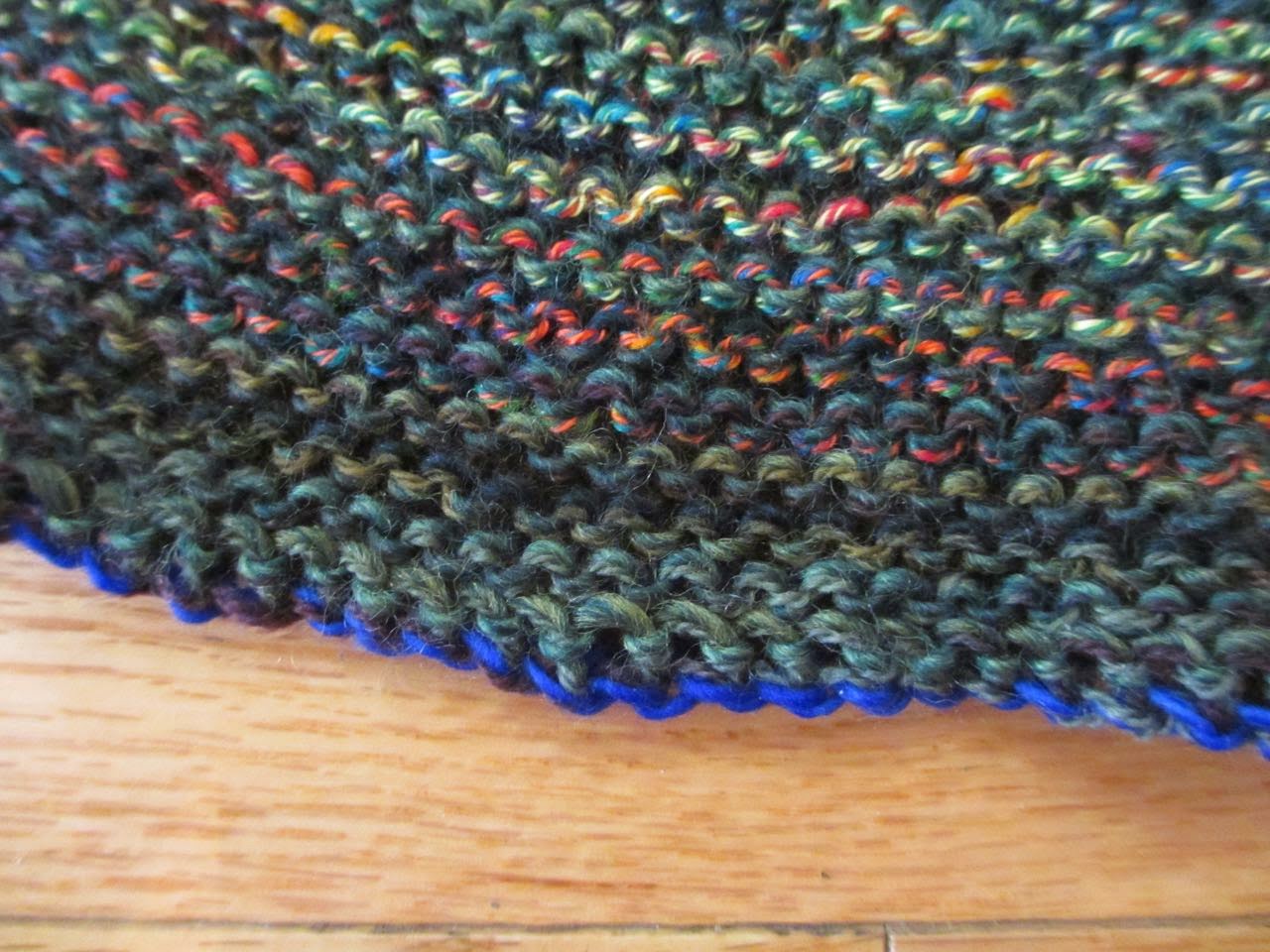 I even got some of the beautiful blue in on the cast-off row. The instructions for the cast-off are perfectly clear: k 2 tog tbl, then put the stitch back on the left-hand needle and do it again. I was tbl-ing along just fine, until I realised I was purling instead of knitting! No way I was undoing this... enough is enough! And it is fine. It's almost noon and it's -17º, so a big woolly scarf is just what I need! 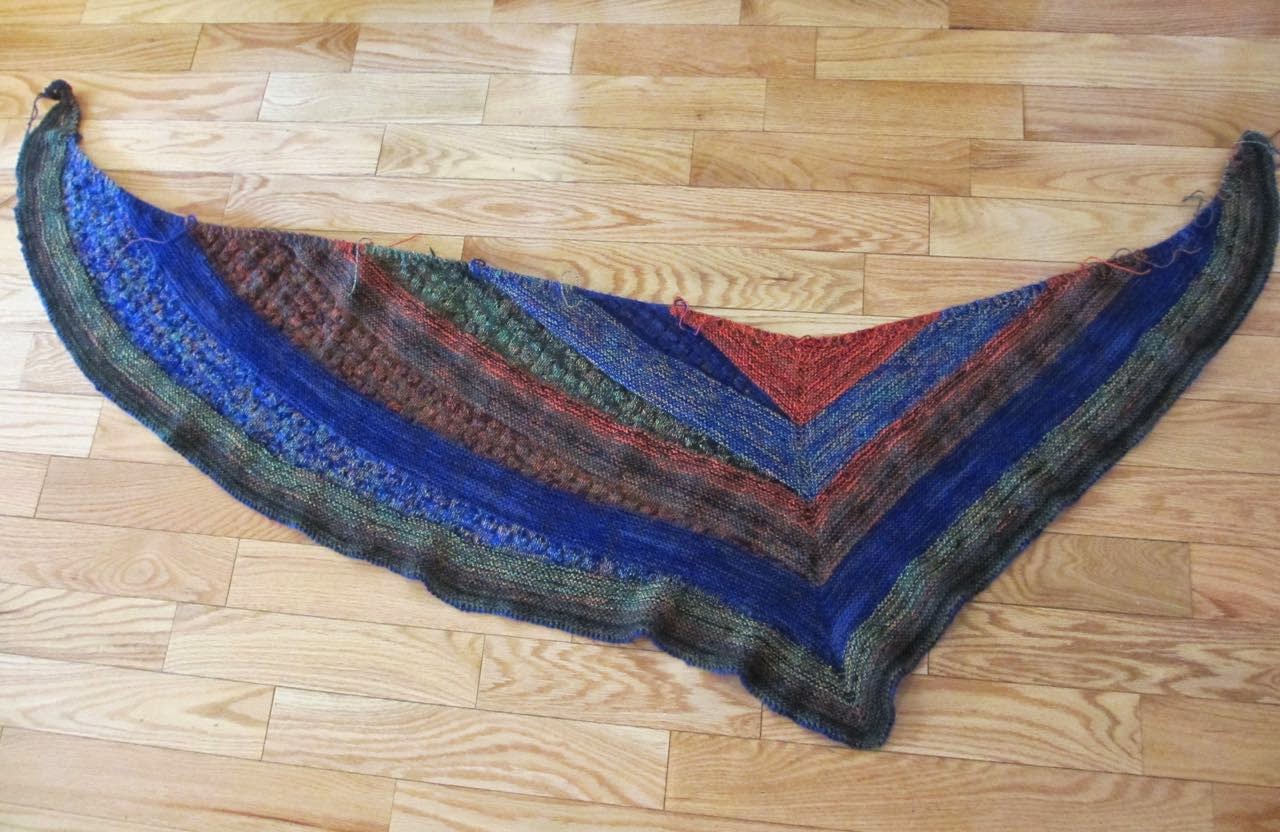 Loving all the colour combinations! 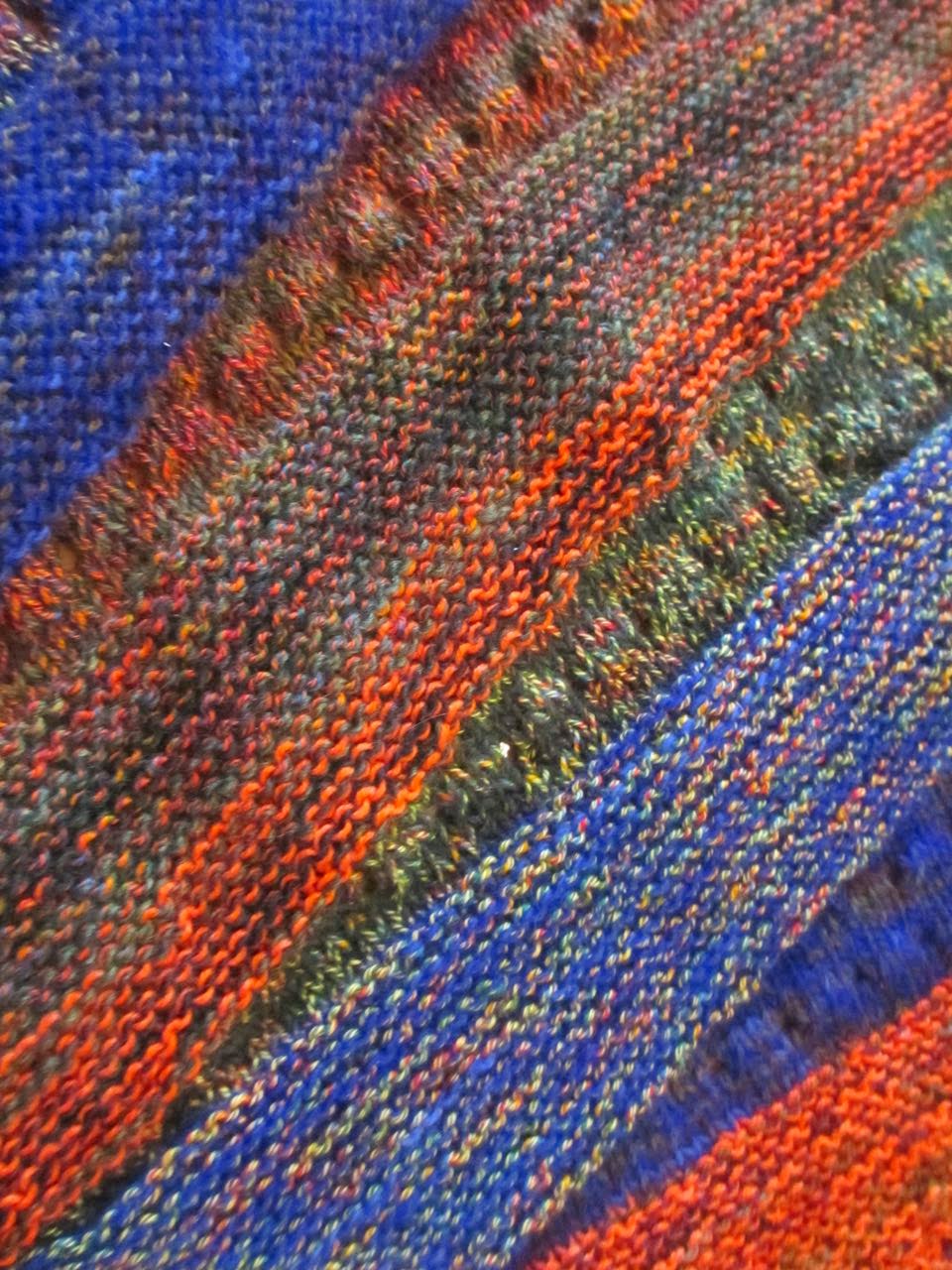 I knit my two rows on my temperature scarf this morning, and thought, "Meh."

I've been worried since about Day 1 that the decrease stitch should be purled on the wrong side, so that it makes a nice sharp line up the scarf. And since I've been working on Samen and making M1R and M1L increases, I was not totally satisfied with my increases on this. I didn't necessarily want to do M1R and M1L, but I wanted to do something other than what I was doing. And, you know, I was still using a bit small needle. So, I ripped out three weeks worth of scarf, reminding myself that I have 49 more to go and I should get it sorted now instead of being dissatisfied while it just gets longer and longer. 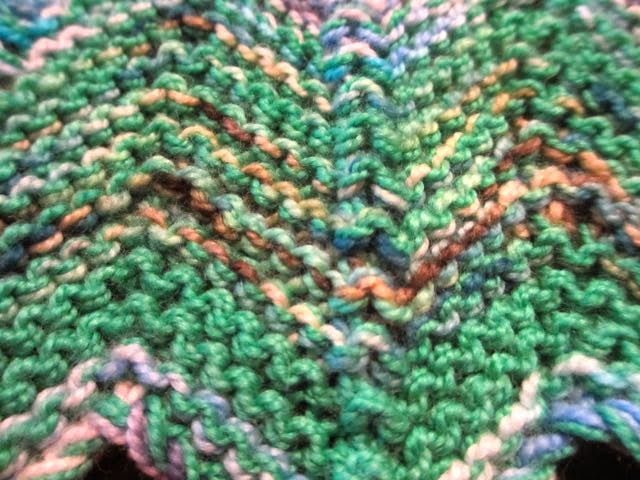 New ones, all knit today! Sharp decrease line, yo increases, and I moved up to a 6mm needle. 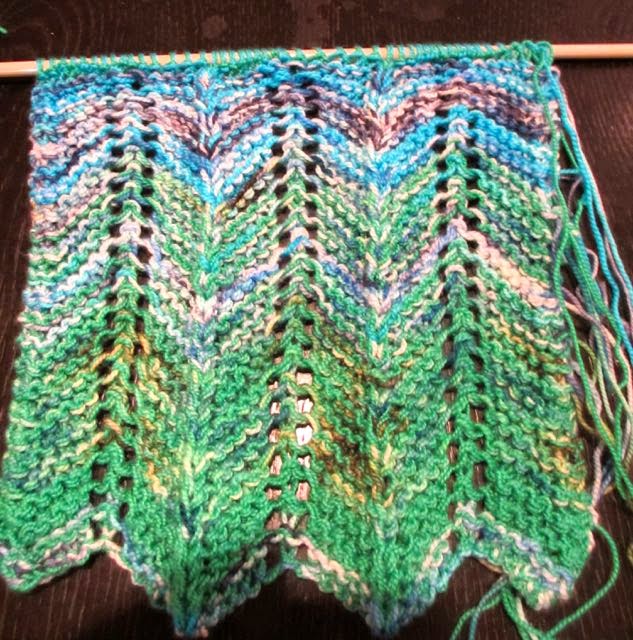 As you can see, it has got much bluer, that is, colder! Those indigo bits near the top mean it was below -15ºC, at least overnight. Not much green these days, though yesterday's high was -0.2º, so I got to do some green today. Kind of looking forward to the yellows of +10º!

Samen is almost finished. If I hadn't spent all my knitting time today on this, it'd be done, I'm pretty sure. So, maybe tomorrow!
Posted by Mary deB at 5:45 pm 2 comments:

Let's see now, how shall I deal with this over-abundance of projects on the go? From the lists I posted a couple of days ago, I will cull the "likely" things and start with them!

Samen is going steady and I'll finish that before picking up anything else. The rows are now interminable; it must come to an end soon.

Then it will be a toss-up between the mitten and the two socks. I just have to do one of each! It might be a bit much to do them all, one after the other, but I will endeavour to do one or two of them.

And you know what? That is all I'm going to commit to right now! The way I get into trouble is by planning and promising too much, so I'll just stop there.

(I will say, however, that I took a trip to Fabricland the other day and got myself a giant pillow form, which needs the finished Fassett squares to cover it. So that will be a large reminder to get back to those.)

Pictures of the temperature scarf coming soon: I had to add two more cold blue colours! 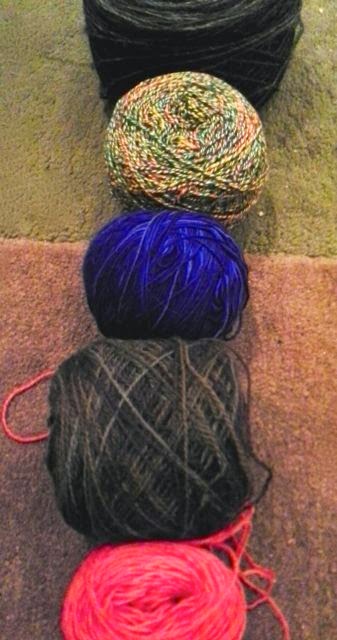 It is a plain ol' shawl, garter stitch mostly, increasing at the centre and at the edges. But the thrilling bit is that every once in a while you work short rows on only one side, which makes a long, asymmetric scarf, and the second thrilling bit is that you use five colours, mixing them two by two, so using AB, BC, CD, DE and then EA, before starting all over again.

Since I did this all on the spur of the moment, I didn't have nicely graduated colours but I did manage to gather enough to get a good start. 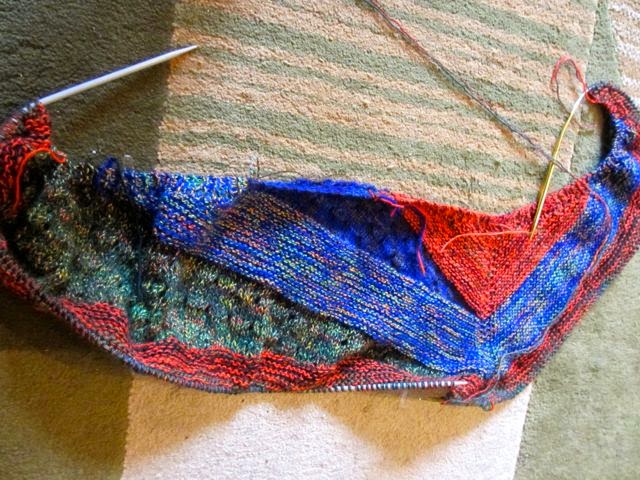 I ran out of the orange (colour A) halfway through its second bit, so now A and D are very similar. Also, the one I chose for E is very dark. The whole thing makes me think, "Yeah, it's good, getting out of my comfort zone." I think the orange and the blue are marvellous and I wish I hadn't run out of orange. And I'm going to run out of blue! I have sparkly blue, and somewhere I have a teeny bit of navy Kidsilk Haze that might work. 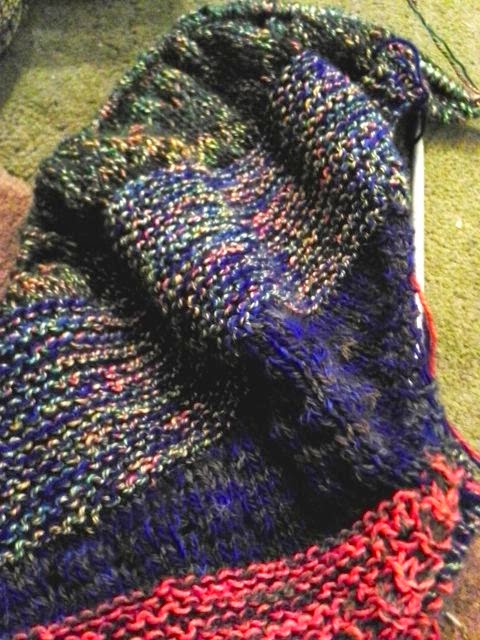 See, thrilling, right? The suspense is killing me.

I was wondering about knitting goals for 2015 and looked back at my first post of 2014.

Let's just take a look at that year-old list:

So now. We could just take out the finished items from that list and get this new list:
However, there are new things to consider!


Now, just leave this with me for a bit and I'll get all organized and sorted and arranged, get back to you with pictures and a plan. For one thing, I want that second golden mitten by March, when I will put aside my big winter mitts for something lighter!