Great leaves I have seen

While Elaine is off learning archery and whatever, the rest of us went to the Allen Gardens greenhouses to see Toronto's very own blooming agave plant. It appears to have been at its finest a few days before we went, but it is still a thing you don't see every day!


They had to cut a hole in the roof to let the spike out, some months ago. It was just a spike for a while, then flowered, and now, as I understand it, the whole plant will die. 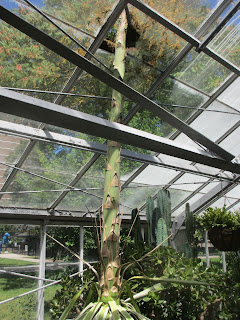 This is what it looks like from the inside.

I'm pretty sure that we have never been to this site before, although we found plenty to look at when we got there. I'm also pretty sure that it is not generally so crowded as we found it. The miracle of a blooming agave seemed to be quite the draw.

Here's a taste of what we've been missing all these years.


We'll be back. I suspect there's a time when lots of their cactuses are in bloom, and I suspect it will be a nice spot to go for stroll indoors in January. 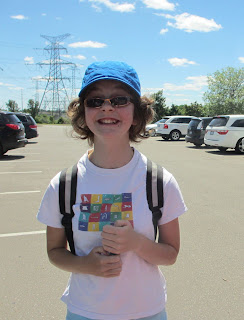 We put Elaine on the bus for camp this week. Before, she has gone to a Monday-to-Friday camp on Toronto Island, which is familiar, close to home and not too long a time. Now she is off in the wild woods of Ontario for two weeks. With kids who have been going to this camp for years. And so on.

We spent days and days accumulating all the stuff -- sleeping bag for the canoe trip (!); white shirt for Shabbat dinner (yeah, we are not Jewish, but the camp mainly is); beach towels and shower towels and rainboots and water shoes, all of which had to be labelled. I wish I'd taken pictures of the heaps of clothing piled up around here.

I got to use my iron to put the labels on -- that was a pretty rare thing! 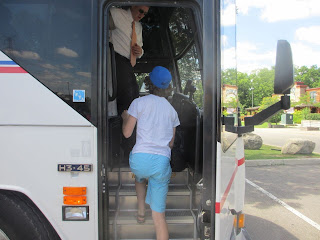 And this was the last we saw of her. 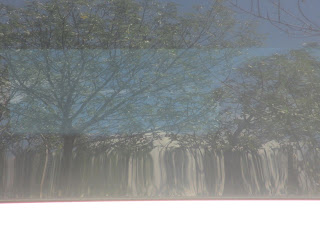 At least, we imagined we could see the shapes of her and her friend behind the big window of the bus! (You really have to click this to see that it is a cool reflection and not just a mistake, I think.)

When I don't blog for ages, but continue to write sparkling prose in my head, I have trouble getting back into the blog mindset. Do I try to retrieve those brilliant paragraphs composed in the grocery store? Actually, this past month most of my masterpieces were thought up as I was cycling home from Booty Camp.

Oh, look, now I must explain Booty Camp, although I hopefully titled this post "Some Knitting."

At the end of May I went to the fun fair at the kids' old elementary school. They are both finished with it now, but it is down the street and there is always something fun at the silent auction table. I bid on two things: an hour with a personal trainer and 4 weeks/8 classes of Booty Camp. I got outbid on the trainer, but got my fitness classes.

As soon as I'd won, I wondered what the heck I'd been thinking! Surely everyone would be 25 and I'd just be the fat, old lady in the back row, probably injuring myself. Well, as it turned out, everyone was 25, but I managed to hold my own, and since I am a wee bit wise as well as old, I modified things to suit me better and didn't end up injuring myself at all. (Sore quads the next day doesn't really count as an injury, does it?) I also am somewhat proud to say that I rode my bike there and back, a 7 km round trip.

It was not like the aerobics classes I did in the late 80s and not at all like the pregnant-lady exercises I did 14 years ago! One night I did 170 squats and 70 push-ups. Really. (Okay, maybe not all 70 push-ups, but all 170 squats!) One night we did a "pyramid" of 10 of one exercise, 20 of another, 30 somethings, 40 somethings and 50 jumps with a jumprope. (I meant to take a camera-phone pic of the board where the evil genius who ran the class wrote it all out, but was half-dead at the end and forgot.) It's called a pyramid because after you get up to 50, you run to the corner, come back and then do the 50 jumps, 40, 30, 20, 10... Lots of lunges, squats, push-ups, hateful things called burpees -- these were the things I most heavily modified!

Anyways, after a month of that I know I can do it, but also that I'm unlikely to do a push-up just for fun on my own. I'd rather do something during the day, instead of rushing off after dinner, and I need a more moderate class -- after Tuesday's class, I didn't want to do much Wednesday, and after Thursday's I was stiff all Friday!

So I spent most of June thinking about my glutes.

I did also get a bit of knitting in. I was trying hard to stay monogamous to my shawl fringe, but aside from the occasional thrill of changing balls of yarn, it is so boring and uninspiring.

I once got a bunch of Vogue Knitting magazines from a friend, but had to pass them on again because her cats had been all over them and my ogling was hampered by itchy watery eyes! I traded them to a woman here in town for some of her handspun, and decided to knit up a very warm hat, holding the handspun wool together with some wool/viscose I had lying around. I've been knitting carefully and trying not to strain my elbow and arm, so it's taken me days and days!

Now, I could show you a picture of a half-knitted hat, but the cables are upstairs and the computer is downstairs and it's all just too complicated right now, so you'll just have to imagine. And hope that in a few days, I can show you an actual hat!
Posted by Mary deB at 5:45 pm 3 comments: