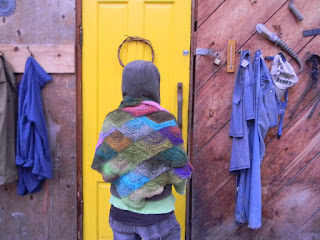 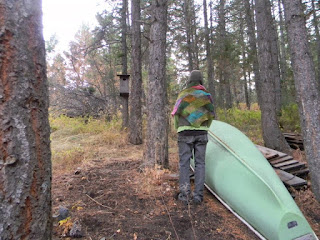 The Noro sock yarn shawl, in use. I think this is my sister-in-law, but it could be her daughter. Pictures stolen from Facebook!

Wow, that's nice; I should make one for me! 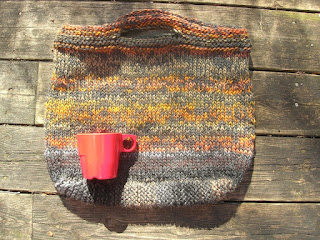 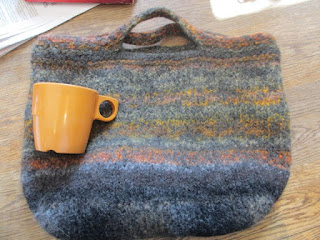 The miracle of felting! The colours are less garish because the yarn fuzzed up and mellowed out, I guess. I am glad I added that extra bit. It is the perfect size.

Now, I have lots of other things to make. Arthur is wearing holes in his socks and I must darn old socks and knit new socks. I have a baby blanket experiment under way and a mostly finished cardigan.

But I really enjoyed making this bag and it was so quick and satisfying! The temptation is rather strong to whip up another, but I mean to resist... especially since the weather is really hot and a felted bag should be made in the fall or winter, really. Right?
Posted by Mary deB at 8:57 pm 2 comments: 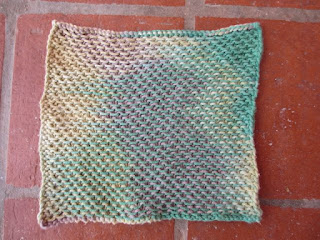 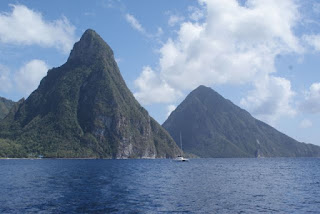 We went to Saint Lucia for the week the kids had off school. We stayed in a resort with pools and restaurants and all-inclusive drinks in reclining chaises, so it was pretty good!

That banana boat ride was a bit adventurous. Elaine and I both are blind as bats without our glasses, and our glasses are photosensitive, so they are our sunglasses as well. But I figured if we lost them we would be very, very sad, so we undertook this adventure squinting and glasses-less. Our companions on this ride were two ladies who spent the whole week wiggling their fingers at each other, so I hoped no signals would be relayed to us from the boat, as two of us couldn't see and two couldn't hear. Actually, we were meant to just sit on the big inflated thing while they towed us around, and many people had done this without mishap, but we somehow dumped out in the briny deep. Salt water up the nose! But so glad we didn't lose the specs!

Our adventures outside the resort were the really exciting bits, of course.

One day we went to Pigeon Island, a big rock from which, after climbing up up up, you can see (on a clear day, which we didn't have) Martinique, or any attacking navies, or Spanish gold ships to plunder, and which is no longer an island. They built a causeway, connecting the island to the mainland and making a nice big bay for a marina at the same time. We climbed up to the place where the British in their wool uniforms banged away with their 24-pounders at the French.

We were told by just about everyone that St Lucia had gone back and forth between the French and English 14 times. So people speak a creole (actually, Kwéyòl) as well as English, and are mostly Roman Catholic. It's been British since they secured it from Napoleon, I believe.

Another day we took a catamaran cruise down the west coast from Castries to Soufrière, seeing the Pitons, the botanic gardens and the mud boiling and stinking in the volcanic crater; having a meal in a restaurant perched on a hillside; and whooping it up on the boat!

The thing that will remain forever fixed in our minds, however, must be the ziplining.

You may have read the adventures of the Yarn Harlot on this ziplines.  She mentions "braking." I somehow imagined a mechanical thing. Also I imagined something a bit more high-tech than a clothesline strung through the rainforest. Alas. Our brakes were our own tender hands in work gloves, and when someone (ahem, me) got stuck, we had no "rescue," but had to pull ourselves along the wire backwards, with those same tender hands. Our family suffered only one injury on this trip, and that was a blister on my finger from accidental braking!

But it was on the last of the 12 lines, and although this "walk of shame" was immortalized in a video my wretched son took, you will never see it!

All in all, it was a blast!

Finally we shook off the last of the sand and got up bright and early to get the bus to the airport. Little did we know there was a foul-up at the Toronto airport and everything was delayed and messed up. We spent five hours in the teeny little Hewanorra International Airport, knitting and reading and watching people mill about anxiously. Ultimately, of course, we returned home safe and sound and slightly tanned.
Posted by Mary deB at 9:52 am 2 comments:

Off for some fun in the sun 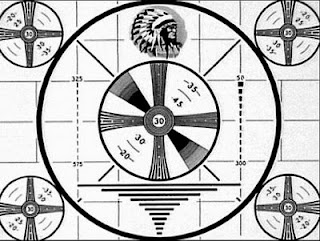 I should come back with a scarf and a few dishcloths...
and a tan and a big smile on my face!
Posted by Mary deB at 12:28 pm 1 comment:

We want high quality photos, lightweight camera, a few of the standard options... Big viewing screen on the back.

We felted the bag at my friend's house yesterday, but I completely forgot about a picture! Next time I go I will have to take a coffee cup. It came out gorgeous!
Posted by Mary deB at 6:43 am 2 comments:

Not gonna run out of yarn 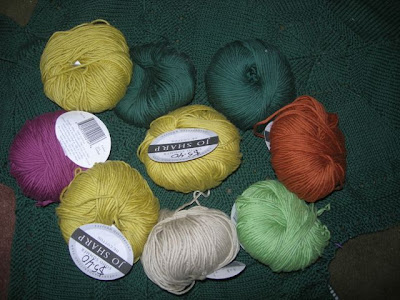 I took a wee bit of a trip to the yarn shop the other day, and was lucky enough to find the same kind of yarn for my blanket! I had bought the Rockpool green in the discount basement years ago, and there was no more of that colour, but I did luck into several other colours which will go quite nicely.

I wish I had done this before starting my first half-hexagon, because I would have maybe made it a full hex, and in a different colour. The blanket will be a bit lopsided, with all the green on one side, instead of, perhaps, down the middle. Perhaps, maybe, whatever.

What I did, in fact, is make the centre of that piece in the yellowy green. 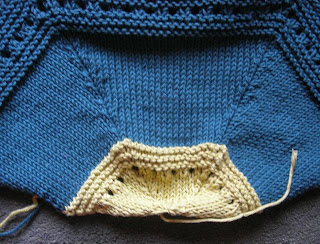 I went on to make the slices in rusty brown and light green. 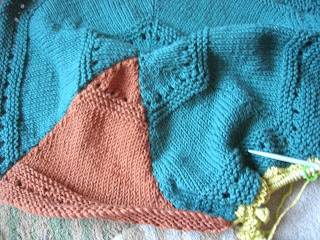 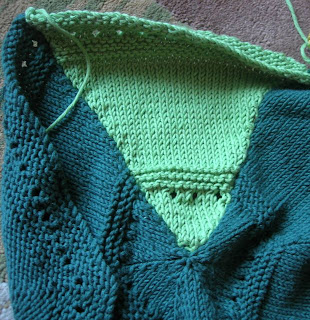 And am making a whole hexagon in between those bits in the yellowy green again. 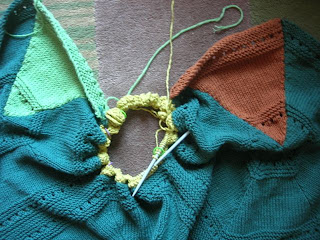 Really, it'll all flatten out! I mean to do full hexagons over the slices, and then another half in between those, and then I think it'll be a nice big blanket. Am wondering about the edges, but we'll worry about that in a bit!

(We all survived the day of boys yesterday, but it was a bit wild towards the end! The cake got 90% eaten; no one spilled root beer, that I know of; and there was just enough leftover pizza for breakfast.)
Posted by Mary deB at 10:22 am 1 comment:

Arthur is celebrating his 15th birthday today! There are a bunch of boys downstairs, playing D&D and eating junk. Which, of course, I provided.

Later I will give them pizza and cake: 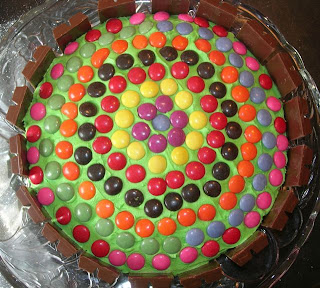 I found this Kit Kat cake via Pinterest; here's the original. 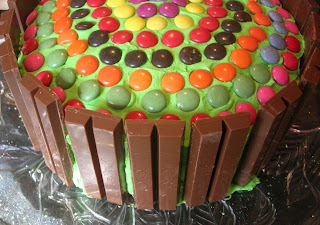 It's just a double-layer chocolate cake, iced and surrounded by Kit Kats, with Smarties on top!

My plain old birthday cake tends to be the Six-Minute Cake, which I knew in my childhood as Timmy Cake, since my cousin Tim used to make it a lot. Some people call it Wacky Cake. I was making cupcakes with it the other day to take to Elaine's class, as it was her birthday. There's a girl in the class who can't have dairy, egg whites or gluten, so a cake that she can eat has to be pretty darn special! But I was stirring things up and thought, "Huh, no eggs, no butter... All I would have to do is get some gluten-free flour!" So I did, and I made the recipe just as is, but with gluten-free flour and 2 tsps of baking soda rather than one. And it was perfect! Another triumph for Timmy Cake!

And now I've written this blog post; I think I will venture downstairs again to witness the chaos before ordering pizza. Luckily the next birthday is my own!
Posted by Mary deB at 3:01 pm 2 comments: