One down, nine to go

The Hot Docs festival has started again. I have been working in the office, wondering if I should get some theatre shifts to enjoy the hustle and bustle. Naah, at my first movie, I was sure glad I wasn't ushering.

Yesterday, Stephen and I went to see Lo and Behold: Reveries of the Connected World, by Werner Herzog.  It talked about the history of the internet, the people who first connected computers and networks, a hacker or two, people who avoid the internet, people recovering from addiction to the internet.... 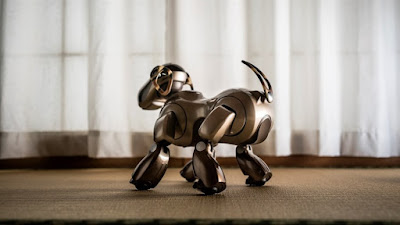 It is called The Dog, and it shows people with robot pets. What happens when the manufacturer stops making parts for your little robot dog?

Today, two more! Will report in when next I come up for air.
Posted by Mary deB at 11:40 am No comments:

Just about the craziest hat

I knit a hat. I wonder if anyone will ever wear it out in public. 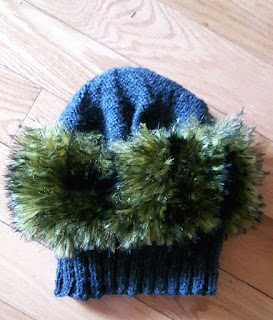 Grey plain ol' wool for some ribbing, then we alternate that and some golden/green/yellow/black eyelash fuzz. 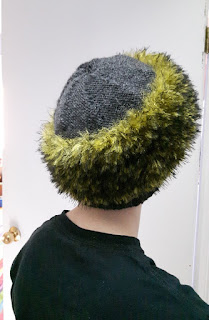 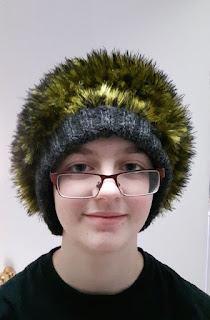 Not everybody thinks so. 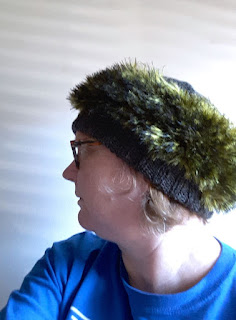 A thing you should know before attempting this yourself: the eyelash yarn works better from one direction than it does from the other. I discovered this by working it from the wrong end. The threads bunched up weirdly around the needles instead of flowing smoothly along. Of course, once I figured this out I was well into it, and the thought of ripping this stuff out was too horrible to contemplate. 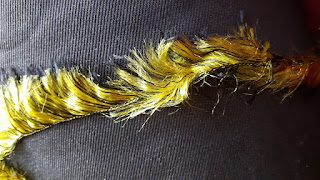 Another thing that would be useful in planning your eyelash fuzz hat: the fuzz mainly goes to the purl side of the fabric. The ball band says to knit this on something like 7mm needles, and since I was also using DK wool, I was using 4mms. That might have had something to do with it; it might be more flowy on bigger needles. I just turned the hat inside-out when I was done.


We seem to be past wool-hat weather here for this year. I think I'll try to photograph as many people as possible wearing this, and we'll see what happens come November.
Posted by Mary deB at 7:22 pm 2 comments: 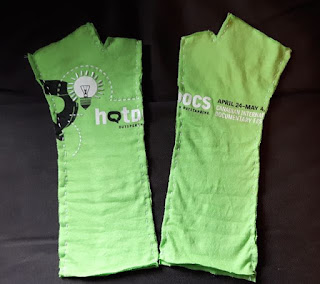 I made these fingerless mitts from a pattern in an Alabama Chanin book. First I had to go to the copy shop and get the pattern enlarged (something like 317%, if I recall correctly), so that took me months. I was finally spurred to action when I found a pile of X-Small volunteer shirts left over from the 2014 Hot Docs festival. Perfect. 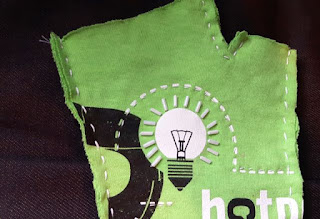 I made the first mitt, applying beads and doing a bit of stitching here and there, but found that my hands are a teeny bit bigger than "average." 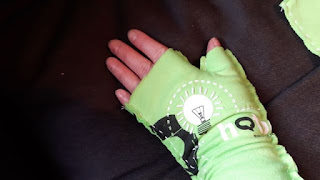 So the single mitt sat around for another few months while I gathered my strength to make something that would really be useless to me! However, I did it, finished the second one, and will wave them around the volunteer office next week and see if I can find someone with average hands. 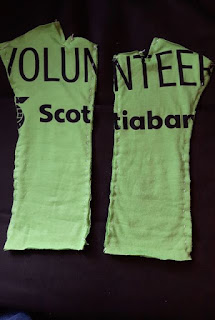 I have enough shirts to attempt a hat. Unfortunately we have red shirts this year, so it won't match or look official, but I would like to see if I can get a hat to fit.
Posted by Mary deB at 3:49 pm No comments:

A few days away

Last weekend I hopped off to Castlegar for a few days. 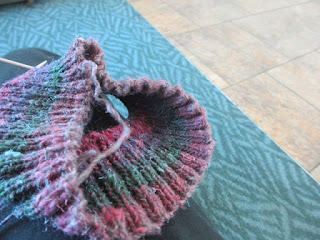 Of course you get a "knitting in the Vancouver airport" photo. I had this Noro Silk Garden Sock yarn for another project, but, flushed with the success of the previous sock yarn hat, I decided a hat with this would be the perfect travel knitting. The colours turned out quite differently than I had anticipated. You just can't tell from the outside of the ball. 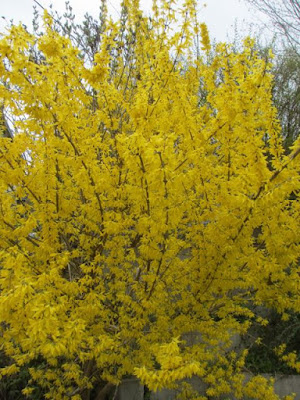 Unlike in Toronto, in Castlegar spring has pretty much arrived. Forsythia blooming all over the place, and the lilacs should be out in the coming week, I'd bet. 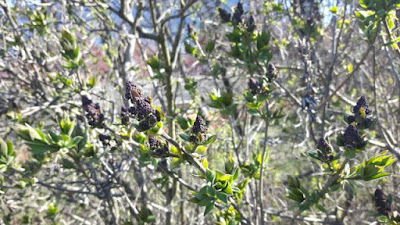 My brother came out as well, and his plane was delayed in Toronto by snow. 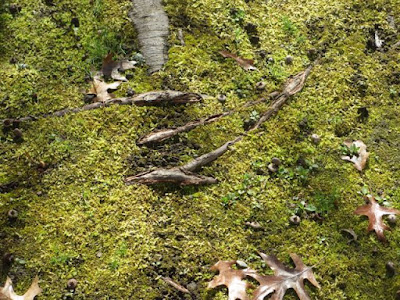 Moss outside my sister's back door. 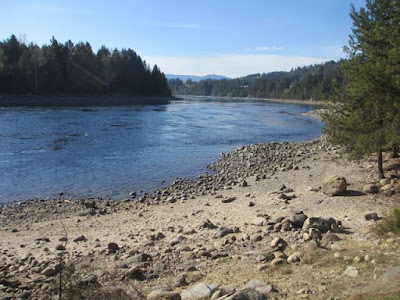 And the river just down the street. I spent some time one morning wandering along the shore looking at the rocks. I only brought one home this time, a greenish one that I can imagine is jade. 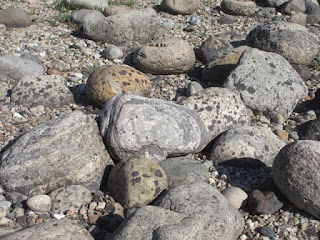 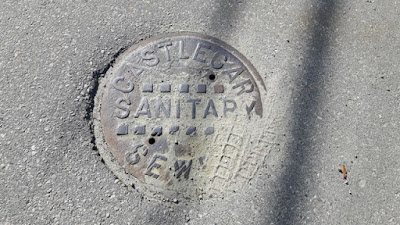 Even the sewer covers are cooler than those at home.

My sister was taking part in a Scrabble tournament at the library one day, so I went along. She beat my total by a few points: 977 to 969, but neither of us was in the top three -- those guys had 1100+ points in three games! 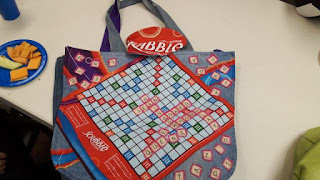 Someone's bag I coveted. The base is just denim, with the Scrabble fabric appliquéd on. I've looked for such fabric, but have never found any so good. 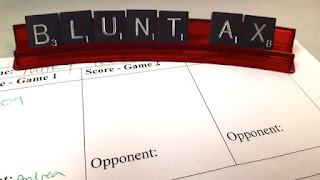 My favourite rack of the day. I don't think I actually played either of those words, but I did use my X to great advantage, I recall.

We did a very little bit of work on my mom's stuff in the storage unit. We carefully picked three boxes that contained easy stuff to deal with -- at least one box will just go to the thrift shop; one sister picked through and took care of another boxful; and there are a few things which we'll deal with "later." One day I'll go with more than a small back pack, and bring home things like this teapot. For now it is back in the locker until another day. (I tucked the little bowls in my bag this time.) 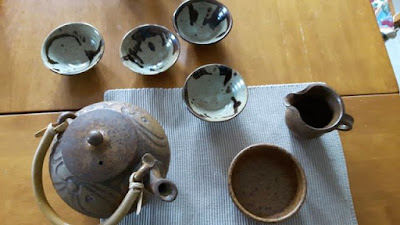 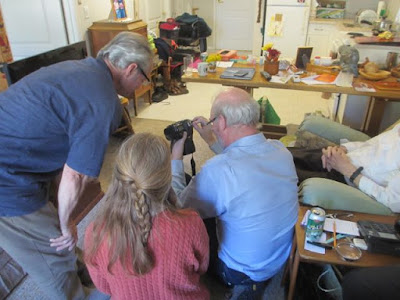 A brother-in-law, a sister and a brother, trying to make the camera take a picture. We managed to get all 5 siblings together, which is a bit of a rarity. 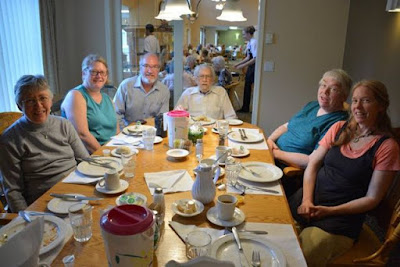 And we managed to get one decent picture of us all, even more of a rarity. Sister, me, brother, dad, sister, sister. 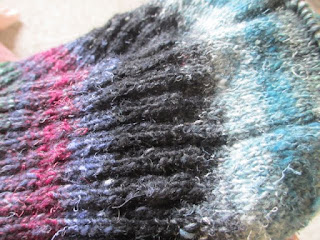 The hat got almost finished, but I was working on a circular needle and needed double-points to finish it, so I actually had no knitting on the plane ride home! 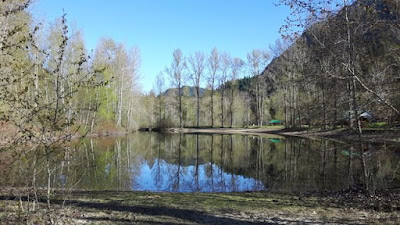 A last walk in the woods before getting my plane home. We saw an eagle that morning. 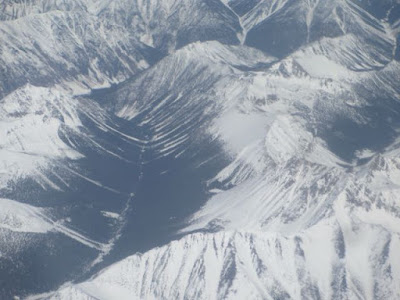 The trip over the mountains to Calgary was perfectly clear and I had a window seat. I have quite a few pictures like this! I zoomed in on this perfect U-shaped valley. 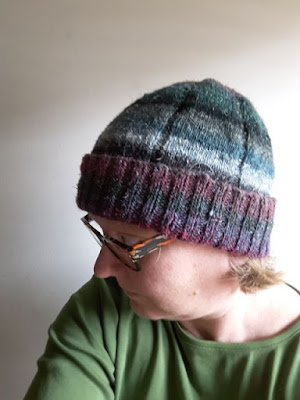 I finally finished the hat. I think it'll go into the Christmas box.

I got home on Friday at 1 in the morning, and Stephen left at the crack of dawn on Sunday to go to England. Maybe it will be spring here when he gets back!
Posted by Mary deB at 11:55 am 1 comment: