It seems everything in the world requires using one's right arm. Moving things about, cooking, sorting that box of miscellaneous crap from the basement.

One of the slightly crafty things I've been meaning to get to involves a book I got at a yard sale last summer.... Now I say that and am not sure if I mean 2011 or 2012. I think it's only been hanging around for months, not a whole year!

It's a Selfridge's Schoolboys' Story Book, and the bookplate in the front informs us that it was given as a gift in 1927.

The stories seem to be about boys of age 10 or so, often at a boarding school. There is a story called A Priceless Fag. There are strange tramps, heroic exploits and great sportsmanship. Haunted houses that turn out to be not haunted, of course.

And these illustrations, which are perfectly serious and now, totally camp. There are probably about 10 of the colour ones. The paper is brittle and yellowed, so it seems crazy to carefully frame them. I can scan them; I thought of scanning pages of text, printing them on modern paper and doodling on them with my bright-coloured Sharpies.

My arm still hurts, and it was not getting better, so I went to the doctor. Tennis elbow!

No knitting, no extra mouse-clicking. I'd like to say no dish-washing or grocery-hefting, but we must be reasonable. 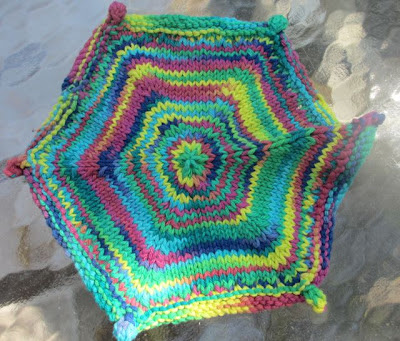 So, I leave you for now with a Mason-Dixon washcloth that I made for a swap. I'll be baaaaaack!
Posted by Mary deB at 8:43 am 4 comments:

Now that was a good movie 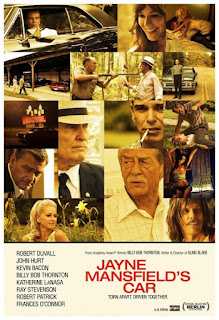 Jayne Mansfield's Car was the last of my festival movies. Set in 1969 in the South of the US, it deals with a Daddy (who was in WWI), his three sons and a daughter (the boys were in WWII, in varying degrees) and his grandchildren (who are eligible for the Vietnam draft). The matriarch of this gang left long ago and went to England to marry a gent played by John Hurt.

She dies; the two families meet when her body is brought back to her homeland.

War is somehow on everyone's mind -- they either succeeded or failed at it themselves; their kids think about it differently than they do; it is noble or terrible. Everyone is crazy.

Scenes are often separated by a completely black screen, just for a moment. One of these black screens appears about a minute before the end of the movie. Don't start to applaud then; it's not over just yet.
Posted by Mary deB at 11:04 am 1 comment:

This week has been crazy busy. For one thing, it's still the beginning of September. Elaine is getting used to a new school and Arthur's school misprinted the agenda books, so we don't know when the late starts or early dismissals are and the phone line isn't updated and the webpage is terribly out-of-date.

And then, I decided to go to the film festival.

Monday we saw The Company You Keep, a thriller for old people. It was quite exciting and intriguing and, like Cloud Atlas on the weekend, quite good to look at, with some great scenery for Julie Christie's hangout at Big Sur and the big ol' chase through the woods in Michigan. (Perhaps both were shot in British Columbia!) 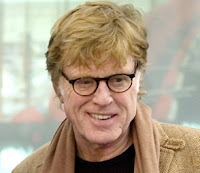 One nagging thing is that the chronology is all wrong to me: the crime that Robert Redford and Susan Sarandon are charged with took place "around" 30 years ago. That was 1982. (Believe it or not.) They were members of the Weather Underground, which had sort of petered out about 10 years before that. (So maybe our movie takes place in 2000? No clues to that, unless gas at $3-something a gallon is a clue. No mention of Sept 11, no mention of the Occupy movement.) And they were student radicals at that point, so maybe 30 at the outside. Robert Redford is 76. Susan Sarandon is 65. But, quibbling aside, it was a fine way to spend an afternoon!

Tuesday the Ikea delivery truck came with all sorts of stuff to assist us with the moving around of bedrooms. Arthur got a new shelf/room divider which should make life easier for him down there in the basement, and we got new furniture for Elaine's new room. But! We can't set anything up for her for another 10 days because our painter is not available till then, and no point getting all excited till the room is lavender instead of sunflower yellow.

Yesterday, we figured that both of us going to a movie at dinnertime for two days in a row was maybe not a good idea, so the morning found me trading in a ticket at the box office, before a lunch date, before a movie. Yesterday's movie was called Beijing Flickers and it was a tale of a few friends in various states of misery in Beijing. Our hero's dog runs away, his girlfriend leaves him for a richer man, he tries to commit suicide but stands on the wrong railway track and the train just passes him by. And so it goes. Interesting.

Last year I saw three movies, and each one was better than the last. This year has certainly been a mixed bag so far, and none of the movies has been totally wonderful. Nothing has been bad, but nothing has been as super-fun as any of last year's picks.

Tonight Arthur and Stephen are going to Lunarcy! which promises to be "zany" and tomorrow night,  or is it Saturday, Stephen goes to The Lebanese Rocket Society, which should be "poignant" and "riveting." I'd like to see both of them, but then, there are another dozen movies I would like to see!

Ah, and I must tell you my knitting-related story! I was in line, waiting for The Company You Keep, and had to dig around in my pack for something... ticket, perhaps? So I took out my bike helmet and my knitting and whatever. The woman next to me, who was wearing a necklace sort of like this, asked me what I was knitting. So I told her it would be a hat, but my arm was sore and I was trying to be moderate. Her friend said I should learn to do things with my other hand (hint: not a knitter) and the first woman (a knitter) said, "Yes, that would be easier than being moderate!"
Posted by Mary deB at 11:04 am No comments:

We went to see Cloud Atlas at TIFF yesterday.

Costumes including Tom Hanks' hood of the future: 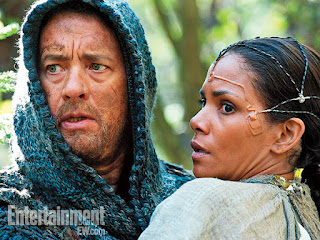 Another pic of the wrap/poncho/hood is here, and a trailer that will blow your mind is here.

Today's treat: Robert Redford's The Company You Keep.
Posted by Mary deB at 7:29 am 2 comments:


WIPS, off the top of my head:

I went back to look at those goals I'd made at the beginning of the year. Some I'm way ahead on; others might just get a big FAIL next to them at the end of the year!

On top of all this, I over-exerted myself with the knitting over the Olympics and then seem to have continued to hurt myself with occasional knitting and much "mousing" on the computer. So my right arm hurts in the elbow-like region, and I should just leave all this and go read a book, I believe. Just don't expect the FOs to be flying off the needles! Waah!
Posted by Mary deB at 8:50 am 6 comments: