Tuesday was Joe: super brilliant, super miserable, based on a novel by Larry Brown.

Nicolas Cage plays Joe, a guy with some issues... He tries hard not to get too pissed off at people, but every once in a while he sets his dog loose on a nuisance or puts a cop in his place. He has an iffy job; pays his underlings cash for the probably illegal work they do; drinks and smokes too much; but kinda has a heart of gold. He takes on a young worker with even more issues, but of a different sort: he has a violent, drunken daddy, a sister who suddenly stopped speaking for some reason, a useless mom. He, too, has a heart of gold. As they say, he's on the fence: is he going to turn bad or escape the crap and do something worthwhile?

There's a lot of just awful stuff that happens in this movie. I wouldn't have chosen it myself, and would be careful who I recommended it to. But it was perfectly cast and acted, the settings were wonderful, and it certainly did not get sentimental or preachy about anything.


Nicolas Cage and Tye Sheridan, already an award-winning actor at age 17, and the director, David Gordon Green, were at the theatre for Q & A after the movie, which is always a great bonus. A woman in the audience said she thought the movie was about the failure of hyper-masculinity in a failed America, which the director disagreed with. I think she was bang-on, actually.

Today I got to the cinema at 8 am to see Gabrielle, a lovely, gentle movie about a woman with William's syndrome (which I had never heard of) who falls in love with another mentally challenged member of her choir. She wants to be independent, have her own apartment and her own boyfriend, like her sister does. She is pretty resourceful and so happy a lot of the time, but gets lost when she strays off the usual route and is terrified by the noise of a smoke alarm.

It's a nice, slow movie with a lot of music and singing, and (*spoiler alert*) a happy ending. The director answered questions afterward, and we learned that the actress who played Gabrielle indeed has William's syndrome, but the man who played Martin, her "chum," is a professional actor. And that really was Robert Charlebois.

I kind of hope tomorrow's movie doesn't have anything to do with mental illness, but I'm not holding my breath. It's called A Touch of Sin and promises to be violent and crazy.
Posted by Mary deB at 5:06 pm No comments:

This is the movie I saw yesterday. It's a doc about the real-life story behind Dog Day Afternoon, and so much more.

Lucky for me, there are clips of Dog Day Afternoon on YouTube, so I wasn't going in complete ignorance, because I was 15 when it came out and I never got around to watching it when I got older.

This guy, who calls himself the Dog, did a few crazy things in his life, but his main accomplishment was screwing up a bank robbery so badly that someone made a movie about it, and that was his claim to fame all the rest of his life.

The whole story is wild. Nice wife and two children; gay sex in the army in Vietnam; the whole Greenwich Village scene in the late 60s and early 70s; marrying men long before gay marriage was an issue; bank robbery; prison; infamy; cancer....

I wouldn't have chosen this movie if I'd picked my own tickets at TIFF this year, but I'm glad I ended up with it. Today, Joe.
Posted by Mary deB at 9:56 am No comments:

It's a new month

I have been knitting more and more. I will even have a couple of things to show you in the next few days.

I started a hat last September. I remember trying to knit it in the lineup at the film festival, but didn't get very far because of my tennis elbow. I worked on it last week and now just have to finish off the top and sew a few ends in.

I also started a Honey Cowl. I know, everyone is doing it! I was in the yarn shop with Elaine and she picked out some nice yarn, so she gets a new fall cowl. I've knit up one ball and have three more. I think I'll only need two, though... but it's hard to see what it will be like wrapped around one's neck when it is jammed on a circular needle. I aim to finish this in September.

I also have knit a row or two on a sock I started a million years ago. That, too, can be finished off this month, I believe.

I'm sorry I have no knitting pictures for you now, but here is our most successful weird perspective picture from our holiday last week: 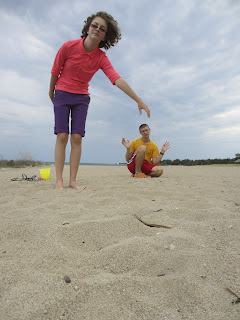 She will just pluck him up there. See how very alarmed and worried he looks. Yeah, okay, we still have work to do on this idea, but we are improving!
Posted by Mary deB at 12:09 pm 1 comment: