Elaine and I took a trip out to Value Village this afternoon. She tapped her foot while I cruised through housewares, and then gladly tried on a bazillion fall jackets before settling on a purple reversible one.

We picked up a few other clothes, schmancy girly jeans (you'll see the pink ones below), some shorts for Arthur....

Then we hit the knitting needle shelf. 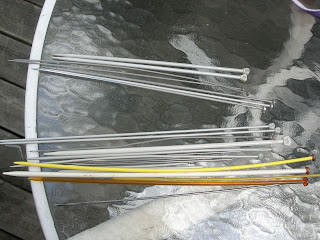 This all came in one bag. There were a few more, without the "head" on, and I've just tossed them. (What is the correct term for the knobby bit on the end? The knob, perhaps?) 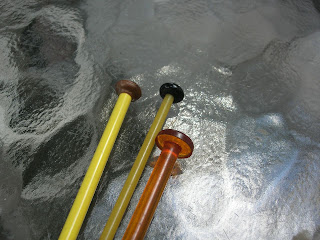 Luckily knitting needles are really fine decorative objects... none of these has a mate.

And then there was this thing... (click to embiggen, as always) 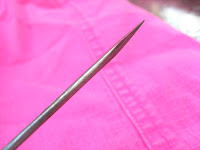 About a foot long, 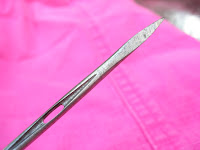 
and both ends have these triangular points, excellent for piercing innocent fingertips. 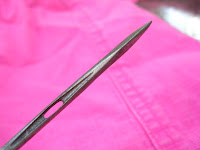 Some kind of needle, for sewing really tough stuff -- that point indicates serious business. It's about the diameter of a sock needle, 2.5 or 3 mm.

Elaine, who really knows very little about sewing, said you could make a ruffle with it, piercing all the gathered fabric at once. This, she felt, would explain the great length. Clever idea, but I'm not sold on it.

I made a list at the beginning of June, but haven't checked in on that yet!


I hope to finish the brown wool wrap in June, though it won't get much use then!

Um, no. In fact, it is likely still in exactly the same spot it was. I look at it and my hands get sweaty. Let's leave that till September! 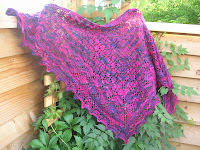 And something for my mom's birthday in July

Done; I sent her the Swallowtail.


And the jazzy socks

Progress has been made. 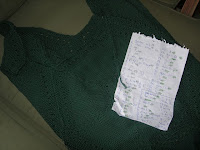 And the Basalt tank (oh, my gosh!)

Here you see it needing a few ends sewn in, with my crib sheet. The pattern in the book is hard to follow, so I wrote it out line by line, marking off each row when I was done. 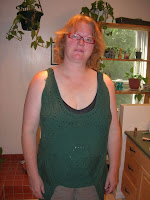 I saw someone had fiddled with this pattern and used a few carefully placed pentagons instead of hexagons, and made a beautiful dress. With some side shaping...

If I had been paying attention, I could have fiddled in a similar way. Now, I don't have a lot of waist shaping myself, but this top could really use some! Maybe padded hip hexagons are needed!

I will wear a tank top underneath, or maybe it will get more use in the fall over a shirt. Anyways, it is done, it was interesting to make, and I may have learned that I don't look like the tall thin model in the book!

Begun! But I can't show you here. I hope to get something up on Ravelry, where prying eyes can't see!

And here's my plan for the future:

Make the secret lace thing.
Make some kids' socks for Afghans for Afghans.
Cross another thing off the WIP list. Maybe the rainbow socks, for the beginning of school.

That's it for now! 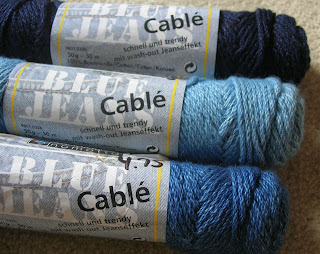 I've been thinking of this yarn for some time. It's denim, 100% cotton, shrinks and fades with use... It's heavier than Rowan Denim, and seems a bit softer initially. And I see it whenever I go to the depths of Romni's sale room.

I was there yesterday, and lo and behold, there was a sale on! An extra 20% off the sale price... What could I do?!

There was enough of the dark to make a whole garment, but I don't like it as much as the others, so I picked up all the light and medium there was, plus a few of the dark. The balls are only 50 meters each. 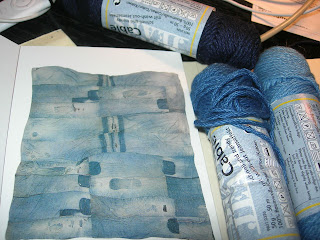 I have crazy plans, or perhaps "ideas" would be a better word. I think of Gee's Bend quilts, patchwork denim jackets for hippy-wannabes from the early 70s, sampler lace bits...

This will take some thought and planning and hemming and hawing. I want texture as well as colour. But somehow, it shouldn't look too tacky*!

Gad, maybe I should make a blanket...


* I used to link to a picture of a tacky denim jacket here, but I am sick of being connected to that picture. My stats will show a dip, for sure, but the picture was never here anyways! I'm sure you can all imagine a jacket in your minds...
Posted by Mary deB at 1:40 pm 2 comments:

One of those bullet-list posts 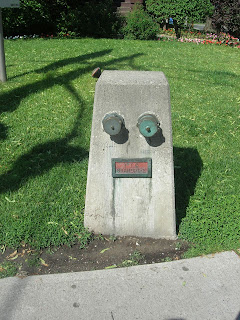 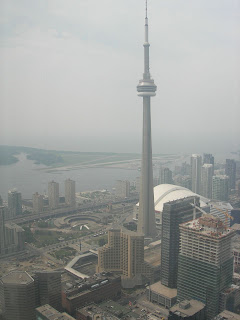 I went to the 68th floor of a bank building today. It could have been a stunning view of the city and the lake, but we could barely see the CN Tower.

The forecast is for rain, thunderstorms, temperatures and humidity to knock you out, and muck like that.

Knitting continues in a sort of sluggish fashion. A sock could well be the limit.

And now I have learned about the Afghans for Afghans campaign for clothing and blankets for children for the upcoming winter. I can hardly imagine the upcoming winter, but this gives me an excuse to use up some single 50g balls of sock yarn. I could probably provide socks for a large number of children with my single balls!

I am determined to finish Basalt before embarking on anything else, and there are lacy shawl patterns bookmarked all over the place, but I will certainly take these children's socks on my week's holiday this August.

Now I'm off for a glass of ice water.

Which reminds me... Yesterday I stopped off in a Second Cup coffee shop for a Chillatte, which is a blended ice and coffee drink. And then I checked some stats, and found some amazing things. A chillatte has 293 calories, more than a Tim Horton's Boston cream donut! But, a Second Cup skinny chocolate chiller has... (drum roll, please!) 433 calories and 82 grams of sugar! It's called skinny because it has only 2 g of fat, but you won't be skinny for long drinking those when all you need is a cool drink. We all know what a 50 gram ball of yarn looks like, but I can't quite picture 82 grams of sugar... (But of course, the internet tells us everything, so now I can tell you that "According to GourmetSleuth.com, one gram of granulated sugar is about 1/4 teaspoon, so about four grams of sugar would be in a teaspoon." Which means that 80 grams of sugar would be in 20 teaspoons. Holy cow!

Right, now, off to the kitchen tap for my fat-free, sugar-free and cost-free glass of water!
Posted by Mary deB at 2:25 pm 2 comments:

When last we spoke, there were some questions raised. Let me set some things straight.

Anonymous, or Anne as we call her, wondered about the side hexagons, and said, "Could you turn them in to 1/2 hexagons so that the bottom edge is even?"

People have made this with 1/2 hexagons there, but those people had their moment of panic before jumping off the cliff. This top is knit hex by hex, and stitches are picked up from hex 1 to make the edge of hex 2, etc. The low side bits are numbers 2 and 3, so I would have to rip out everything I've done back to the very first central hexagon, and then redo it. No way, Jose.

Besides, I kind of like the whole hexagonality of the whole thing. I just think it looks a bit dumpy on me right now... When I get those dang straps knit, it'll all hang much better, fer sure.

And Rosie perhaps went in the opposite direction by saying, "were I about 30 years younger I might be tempted to add stuffing to the lower hexs in a rather Vivienne Westwood-ish way!"

Vivienne Westwood, apparently, can make anything. Check out this dress! Her new collection looks like this. She and Malcolm McLaren had a shop on the King's Road and sold ripped up clothes to punks 30 years ago. However, although I have a stuffed-hip image hazily in my mind, I can't find just the picture I want. I will do my best to think of Vivienne Westwood while finishing this, though.

And Mary Lou said, "Thanks for the reminder that i have about 12 balls of that in my stash in a lovely sagey green...NOT for chaircovers, though."

Oh, dear, no! I will not make chair covers out of 2 balls of Cotton Angora! No, indeed. We need sturdier stuff, I imagine. My chair cover idea has been dumbed down so that I am now considering squares with ties to cover up the icky seats on the dining room chairs. You'll be the first to know when the idea becomes a WIP!

And I'd love to see your sagey green yarn in action!

Now, we can't have a post without a photo, so I will tell you about my cooking adventures! I got the latest Jamie Oliver book from the library, and the photos are fabuloso! We want to make everything... So yesterday Arthur and I made the Blackberry and Apple Pie.

Well, first we decided not to make our own crust. I find pie crust rather intimidating, and always fall back on store-bought in the end.

Then the recipe calls for ginger in syrup. Well, what the heck is that? So we used a scrap of fresh ginger.

And our blackberries were in terrible shape, so I used a handful of raspberries as well. So we ended up with a very loose approximation of a Jamie Oliver pie.

We bought vanilla frozen yogurt to put on top, but then invited The Moth Man and Kentish KT over to help us eat it, and The MM made us custard (with no skin or lumps!). 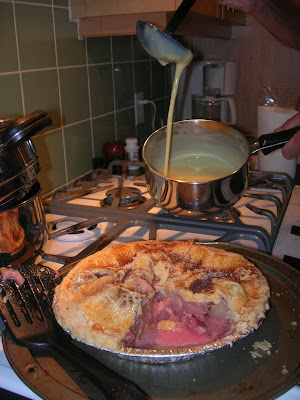 I'm working on the central back hexagon of Basalt. It connects the whole thing around, and so I can kind of try it on. 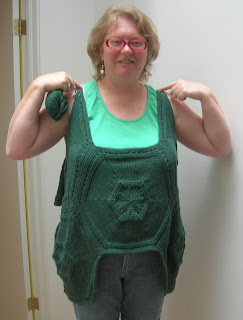 There will be an inch or so of border and straps on the front, so it won't be quite so low in front! And I hope the side hexagons don't droop like that when the whole thing is together! 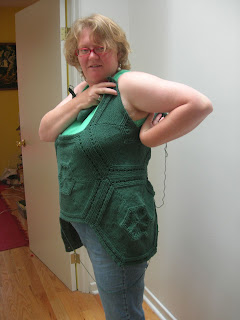 Funny. I'm still not sure about this at all! 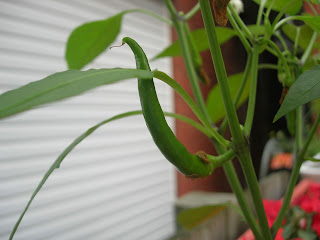 But we do have a hot pepper growing upside down. We will have quite the harvest of these; we'll have to string them up artfully and dry them. Our other attempts at back-deck farming are even harder to photograph. 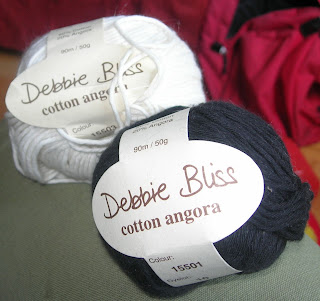 Oh, my, what's this? I went to a new-to-me thrift store the other day and got these two, plus some crap I put back in the donations box, for $1.99. I am thinking of something piratey.

I'm also thinking of knitting a chair cover. (That will take you to the Ravelry group.) Or maybe just some seat covers for 6 dining room chairs. I'll let this stew for a bit.
Posted by Mary deB at 11:20 am 3 comments:

Did you know that it takes three sheep to make a sweater?

I bet you didn't even know they could knit.

I said it was funny looking 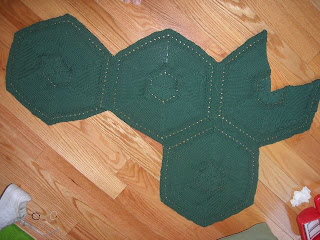 I have finished hexagon #4 of the Basalt tank, a five-sixths hexagon. 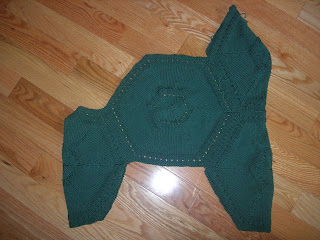 If I fold it, you can see the neckline (well, kind of half the neckline, and there'll be straps...) and how the bottom hexagons go around the sides. It'll be interesting to see how this all works out.

The urge to reward myself for getting this far is great. I should, somehow, be allowed to abandon this, for a moment, to cast on something else. ...even though I have several more unfinished things lying about, and I want to finish this, and casting on something new will get me nowhere! I got a book from the library with knitted lace tablecloths. It's where this awesome delight came from. I do not want a lace tablecloth, or anything like one, but I just can't wait to fiddle with these patterns. There are a couple of scarves I can see in my future (that future where I can knit really fast...).

I think of posting more often and more thrillingly, but somehow, this is what you get....
Posted by Mary deB at 2:21 pm 1 comment: