Have fun this Halloween 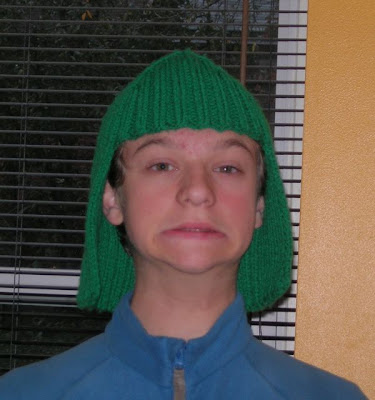 Thanks for all your notes and comments on my last post. I am still not able to carry baskets of laundry up and down stairs (and believe me, I'm not in a hurry to regain that ability) but I am walking to the store (with Arthur to carry the heavy stuff) and to the school to meet Elaine. Progress is being made.

I plan to do NaBloPoMo, posting every day in November. I did it once or twice and it is fun, and especially fun to have so many other blogs to read every day! There's a Ravelry group, of course.

I also might do NaKniSweMo, and knit a sweater in the 30 days of November. (There's a Ravelry group for this, too!) The only problem is, I am enjoying making my Noro sock yarn cardigan, and don't want to stop that and start something new just to meet some silly old rules.

So, I must figure out how to just keep going with the present project, but still imagine that I am participating... The novel writers who started this whole "accomplish something in November" deal have to write 50,000 words for NaNoWriMo. Sweater knitters are expected to complete 50,000 stitches, according to the 2006 rules... and why would the rules change?

My present sweater needs 155 stitches across the back, and though it is a cardigan, we'll just say 155 stitches across the front as well. The gauge should be 38 rows = 4 inches, and I want at least the 22.5 inches stated in the pattern, probably more. Let's say 24 for easy arithmetic: 38 x 6 = 228 rows for 24 inches. Times 155 stitches = 35, 340. That's how many stitches are needed for the back (minus a few for armscyes!). And a slightly smaller number for the front, since I will make not make the front the same shape as the back! Whatever, I will easily have 50,000 stitches in the main body of the sweater, and I am not quite halfway through the second sleeve now. So I shall finish my sleeve, and then not start the body till November first, and finish the whole thing up by November 30th. Deal?

Double bumps and tweedish and TMI 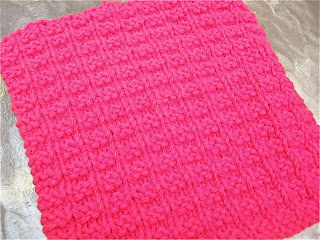 (Really it's a nice red, and not washed-out looking.)
and one's Tweedish. 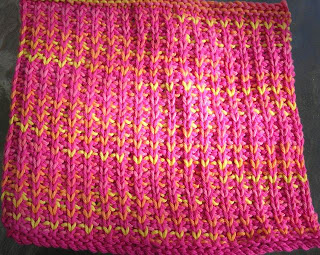 (Who has a kitchen where this would fit in??)
Indeed, I planned on churning out dishcloths, but couldn't get excited about it. You see, I was lying in hospital, recovering from having a chunk of my guts cut out. I was also planning on writing a stunning piece about the whole thing, and now I am feeling too burned out to do that.

But I shall try.

I did the test my doctor handed me when I saw him just after I turned 50. He poetically called it "sh*t on a stick," which describes it exactly. (I also had a mammogram and a bone mineral density test which I passed with flying colours.) But, my stick-work was suspect, so I then had a little colonoscopy (you know, it was not so bad: fear not the colonoscopy) and they found a little polyp, and they took it out with this cool little lasso-like tool -- too bad I was stoned on sedatives and couldn't really decipher what was on the monitor! But, they found another polyp, which was not standard in shape, and couldn't be removed with the little lasso thing, so they sent me to the surgeon. And he cut me open and gave me a scar that will look like this: Here's my head :) and here's my belly button o and now I have a 3 or 4-inch line that goes around the belly button like this -^- . One of the doctors called it "cute" and I have decided to take that to heart. (Also, I have nice insides, I've been told.)

The upshot of all of this is that maybe just maybe that polyp could have turned into something really nasty, and it is far better to get it out of me before that happens. A bit less intestine makes no difference to me now, and I was out of the hospital on the 5th day. I could have said, "nah, leave it for now; it's nothing," but was told the risk involved in doing that was much greater than the risks of surgery now.

My family doctor told me that he gives out those screening tests to everyone, and he knows that not everyone does them. It's not like making an appointment for a mammogram, where you go and just follow instructions: "Stand here, lean in a bit, arm here, hold this, now a biiiiiit of pressure..." The mammogram people have been very successful with their PR over the past few years. This other test is not advertised on billboards (although there was a poster in the hospital where I had the colonoscopy which read, "Get your butt over here") and since you do it on your own at home it is easy to ignore, and it is kind of icky, let's face it. But, lemme tell you: do it!

In the hospital I couldn't really knit with an IV in my hand and sitting/lying in that bed and taking painkillers, but when I got home I made the two cloths, and then got ambitious. 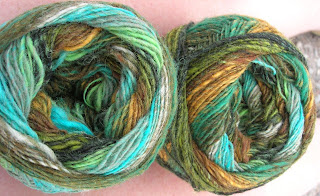 Remember this? I have had so many ideas over the past year, and even started a couple of things, but any sweater knit with this requires so many stitches and is so fiddly, and the yarn is beautiful but sort of rough and not super easy to work with, and there's always something that stops me.

Well, this week I have made most of a sleeve, and I figure there is no turning back now! 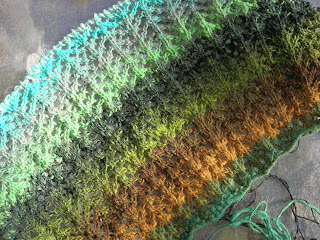 It is from a Fiona Ellis cardigan (Ravelry link) from the early Fall Vogue Knitting magazine this year.

I started it some months ago, actually, when the magazine first came out, and then it got set aside for some reason. Picked it up again and had to remember certain things: I had started on a sleeve, for one thing. I need to make the body bigger. I won't do the short rows, because how could those possibly be flattering on any body with breasts? (In fact, one could experiment with shadow and light and short rows and maybe the Noro would help with all that, but I just want to knit a sweater, not conduct lengthy experiments!)

Bets on whether I actually move beyond sleeves??
Posted by Mary deB at 9:25 am 7 comments:

Number 1: I was sitting in the living room, minding my own business, when a bird flew in the open front door and banged into the wall in the dining room, knocking itself senseless.

Eek! A bird is sitting on my dining room floor, and my bird guy is in Peru! (Ah, a neighbour who probably would know what to do in such a situation. He is also my moth guy and occasionally my plant guy, too.)

Arthur and I managed to upend an emptied knitting basket over the poor thing, slip a file folder underneath and transport it outside. We took the basket away and it sat there for a while, pooped on the file folder and finally flew away. And then I thought, "Jeez, I didn't take a picture!" 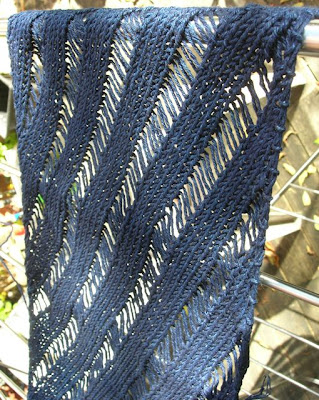 (I did knit myself a Clapotis in Denim last week.)

Thing 2: A while later I was in the park with Elaine, when some kids started collecting all the big plastic toys people have put there, and piled them up against the climber. (What do you call those things: playscape, play structure, climber??)

People who have play kitchens they don't want anymore put them in the park, or little backyard toddler slides or playhouses, or cars or anything! The kids all worked together, making a mountain of these things. Every once in a while things would get top heavy and crash over, and everyone got out of the way, and then started rebuilding.

Finally, I got a bright idea, and called Arthur at home and got him to run down the street with a camera (because my phone is from the 1920s and doesn't have a camera) to take some pictures. Of course, most of them have other kids in, so I hope this gives you an idea of the craziness. 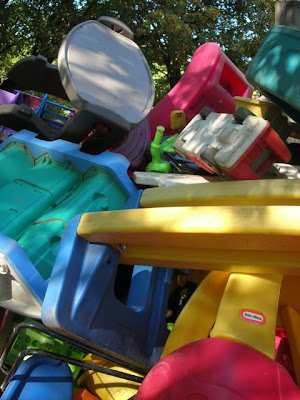 We'll have to go back and see how the erosion works -- will they build it again, or will the pieces scatter around the park, or will some parent say, "Oh, this is terrible" and move some of the cars with no wheels to the trash?
Posted by Mary deB at 3:47 pm 4 comments:

Now my plans are all topsy turvy

Hey, looky what I got in the mail the other day! 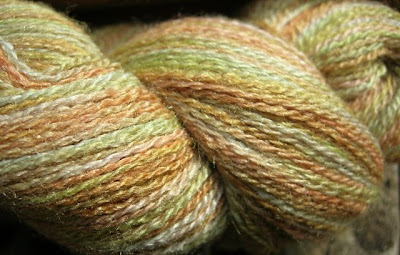 Once upon a time, Alison had a contest on her blog, and I won! Yay me. And the prize was some of Alison's own Yarnscape yarn! Even more yay!

I was given my choice of colours, and settled on "Meadow," a greeny goldy meadow-like colourway! 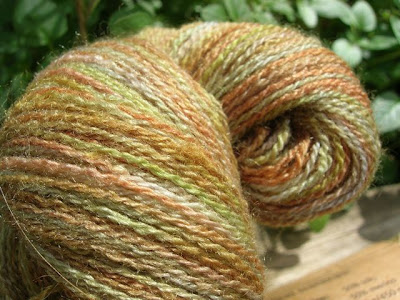 Two skeins is enough for Muir, or I could do Cold Mountain (if I just made it quite a bit smaller), a Lattice Lace Wrap (.pdf available in the sidebar), a lovely one called Gothic Night Shawl that I once found on Ravelry but now seems to have disappeared -- when I clicked the link I got some half-naked ladies and a 404 message.

I would like to make a Pi shawl (there are some snazzy new ideas on Ravelry) but they seem to need around 1200-1500 meters.

I would like to just take my gabillions of stitch patterns and make my own.

For now I will just admire, but soon I think I will succumb and at least wind one of the skeins into a ball, and then I might just swatch something... Watch this space! And do feel free to point me to other shawl patterns -- I only have 26 in my favourites on Rav...
Posted by Mary deB at 3:57 pm 4 comments: