So what's with Ravelry these days?

I was looking at one of my project pages on Ravelry today, and found a button that says, "Share this." I noticed a while ago that Ravelry is no longer in beta, and I guess I missed any fanfare they may have made about that. But I think that I can now share my projects with any old passer-by, just by clicking.

Let's try, now, shall we? This should lead you to my page about the Skiers sweater.

I guess I can only share my own things, as is reasonable, so anyone who is not yet a member should surely still become one. Then you can see who else has made such crazy and delightful things.

I will soon have a picture of the Skiers that will knock your socks off, but for now, I leave you with the wallpaper we found under all those tiles in the basement bathroom. 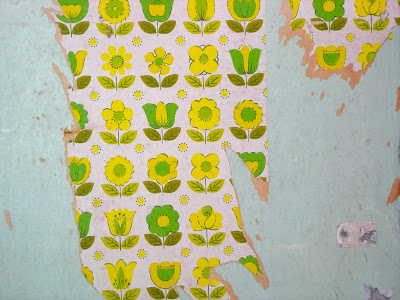 I won't show you what else we found, but I'll give you a hint: The tub was sitting on rubble. There doesn't seem to have been much of an actual floor. It is verrrrry scarrrry, and once we figure out how to get the tub up the stairs and out of the house, I will show you the completely empty room. Don't hold your breath.
Posted by Mary deB at 11:45 am 3 comments: 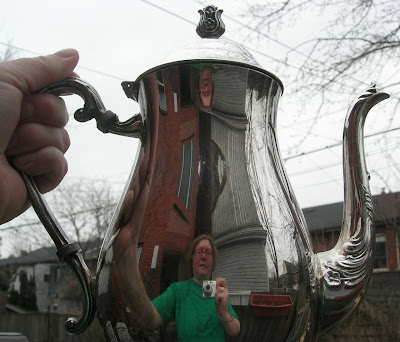 I picked up this abandoned teapot the other day. There was a big line of ancient masking-tape glue across it, which we took off with alcohol, and I gave it a nice polish with Twinkle. Now I think it will sit on our shelf looking delightful. 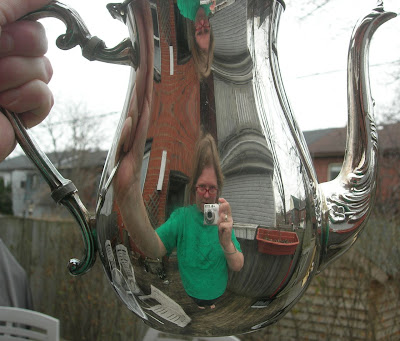 You may remember that Arthur's spring break job involved bathroom demolition. Well, he managed that! We had the great big cousins here for a bit last weekend and they helped carry stuff out and take down the little wall at the end of the bathtub. 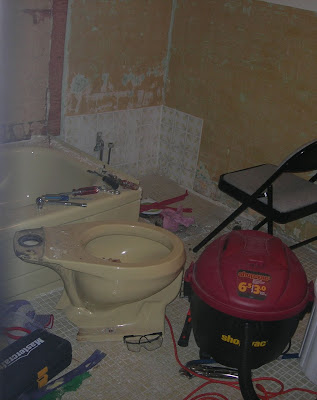 Anyone want a bathtub -- Free, you carry it out of the basement! Take the harvest gold toilet, too!

Also last weekend (and I mean 10 days ago, last last weekend!) someone gave me some tulips. 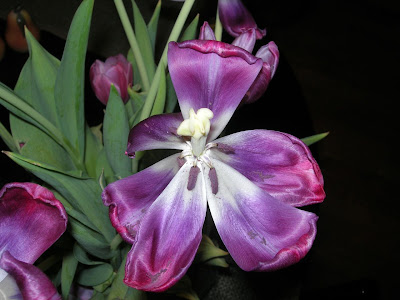 I love tulips when they are on their last legs! I took this indoors, and then tried to move operations outside but a) my camera battery failed and b) the petals fell off when I lifted the pot!

I will attempt to keep these bulbs and plant them in the fall, but I have bad luck with such enterprises.

And that's all that's happening around here, folks.
Posted by Mary deB at 12:40 pm 1 comment:

A note from the archivist

About that crocus picture.... I had to check to see if I really take the same picture every year!

Last year, the crocus picture was on March 26.

In 2007, the crocuses are nowhere to be seen, but we had pansies in April.

In 2006, I was in Cambridge, the land that is overwhelmed with crocuses at a certain point in the year, and I posted a picture on March 28.

So, in fact, I don't take the same picture every year, but I am always glad to see a flower or two, and this year's are early. 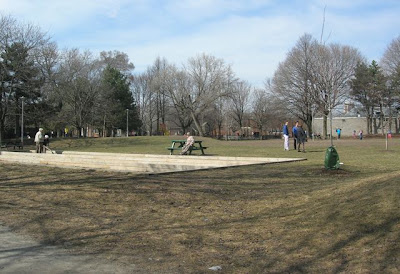 Here is the general scene -- no leaves on the trees, but the old guys are taking advantage of the warm days to rake out the bocce pit in preparation for the season. Last week, they could do this; this coming week is supposed to be cold and damp.
Posted by Mary deB at 9:18 am 1 comment:

I take the same picture every year 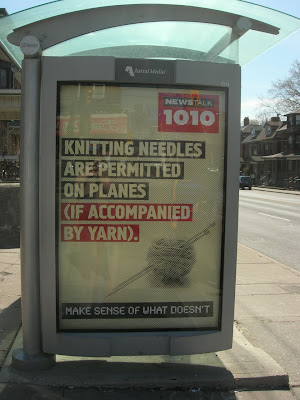 An ad for talk radio. Do that many people really care!? Apparently we knitters do rule the world.
Posted by Mary deB at 3:14 pm 1 comment:

I've been knitting, but I've also been experimenting in the kitchen, and I've had a spectrum of failures and successes there.

Beat in 1/4 pound of softened butter (1/4 cup of butter will make you decent biscuits, but they will be much drier and more biscuit-like than crackery, if you know what I mean), 2 tablespoons of whipping cream (I even toyed with the idea of using milk and think it would be fine, but I had good success with 18% cream) and an egg yolk. Must get your daily dose of fat somehow.

Form the dough in to a ball and chill until firm. Roll it out very thin, cut with the rim of a small drinking glass (Julia says, 1/4 inch thick and 1.5 inch rounds) and bake at 425F for 10-15 minutes.

They are super good. As one might expect -- stinky cheese, tons of fat, and a bit of flour to hold it all together. Yummers! These were also served at my party on the weekend.

I must include one more thing in the culinary adventures chapter here. Arthur found a book at the library called A Field Guide to Candy. So we had to try to make caramels. All went well; we boiled cream and sugar at enormous temperatures, and then we poured the mixture into a pan to set. They said to line the pan with parchment paper, but we didn't have that, so used tinfoil. Ikes! The delicious candy goo stuck to the foil like crazy, and now one truly has to work to defoil the treats. Next time, parchment paper!

And now for knitting! 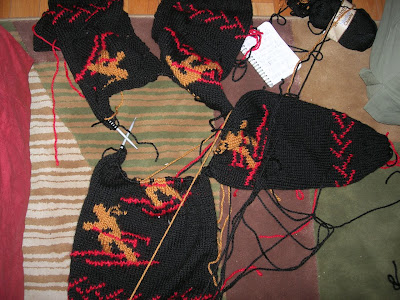 I have done the back, both fronts and a sleeve of the Skiers sweater, up to the underarms. One more sleeve to go, and then a ton of decreasing around the yoke and all will be well.

It's been perfect weather for this sweater the last couple of days. The gloom has gone and we have a few days of sun and warm temperatures. I even saw some snowdrops the other day. 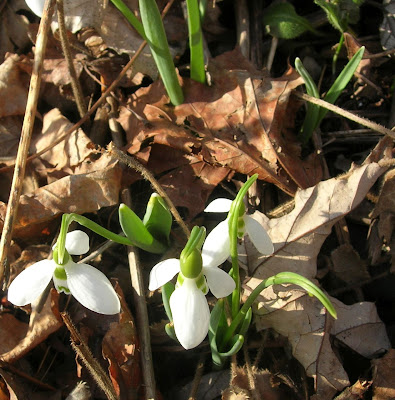 I also saw on the streets of Toronto a Mary Maxim curling sweater! I take full credit for the new fashion trend of Mary Maxim picture sweaters, though perhaps the Olympics had something to do with the popularity of curling! I saw that some totally smitten person paid $26 for a curling sweater pattern on Ebay the other day!

Today, more March Break fun -- perhaps I'll take the kids to the grocery store to stock up on provisions! We're out of cream!
Posted by Mary deB at 8:08 am 2 comments:

Back to seasonal gloom

We've had nice March sunshine lately, but today we are back to normal March weather. Some birds were passing through, which we haven't seen for a bit. 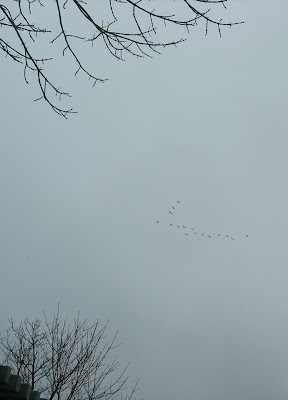 Make me a blanket like that!
Posted by Mary deB at 1:30 pm 5 comments:

Hello dear blog-readers,
Today is my birthday. It's a big one... a really big one, with a zero at the end and a five at the beginning.

Nothing earth-shattering is happening here. I've been told not to go into the shed, but when I suggest to the kids that there is a motorcycle in there for me, they assure me that is not true. Who knows?

Some people get mushy about the passage of time and all that, but things seem much the same today as they did yesterday. I do get a nice dinner out tonight, and a party on Saturday, but perhaps the idea that I am now over the hill and on the downward slope just hasn't sunk in yet.

Arthur and I went to the Textile Museum this morning, and saw some wonderful quilts and shawls -- shawls that really wrap around a person, huge things! Paisley, woven, printed, light, heavy... not knitted, though! I knew there were quilts, but I got mixed up between the Textile Museum quilt show and the Royal Ontario Museum quilt show. I'll hit up the ROM sometime soon.

Since Arthur is off school this week, and since we are having a party here this coming weekend, I thought he could do some prep work, and asked Stephen to provide him with chores, like buying potato chips or sweeping the floor. Stephen's mind was clearly on other things, and he gave Arthur the following list:
So, needless to say, this will not all get done in a week, and the basement bathroom is presently unusable. We hadn't used the tub in ages, and it was holding a 3-level shelf, full of paint cans, children's artworks, a humidifier, a lamp, with a spare mattress tucked in behind... Now all that stuff is in front of the washer and dryer. 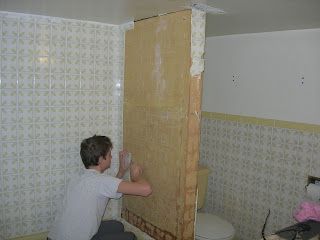 Anyone want some tiles? There are two walls not in the picture, also covered in these tiles. We'll think of something, but I'd love to learn that someone just down the street wanted to mosaic their whole house. Meanwhile, the demolition is proving to be kind of fun!

And that's what happens when one turns 50, I guess!

ETA: It was a bread-making machine, not a motorbike at all! Much more useful -- stay tuned for rhapsodic posts about bread!
Posted by Mary deB at 7:23 am 10 comments:

I Hope and wisH it finds a good Home

My H is done. I shall mail it off to England where it will end up sewn to lots and lots of other letters, in the Poetry Society's second knitted poem. 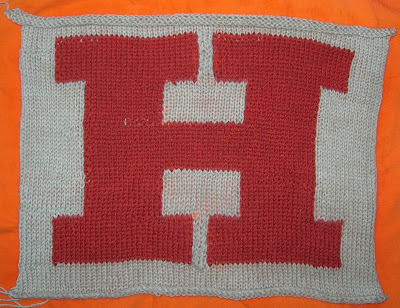 I would love it to be in
But, I bet most Hs end up in tHe or tHis or some other necessary but nondescript word.

Thanks to Franklin for making this lovely medal!
And thanks to all of you who commented on my Birch! I'm quite pleased with it, of course!

I found myself digging in the stash to find another skein of laceweight yarn, but will not cast on a new anything until I get a few UFOs out of the way, and even then, I doubt a rational person would jump right in to another lace project.

One thing the Knitting Olympics shows us is that knitting monogamy (or monomania, as some would have it) gets things done. I think one doesn't have to set such a crazy pace, but certainly it would be interesting to try to knit 12 things in a year. Not 12 dishcloths, but a few sweaters, a few pairs of socks, maybe a few hat and mitt sets. Sounds totally doable -- if we can knit shawls and sweaters and blankets in 2 weeks with only minor stress and injury, think how breezy it would be if we had a whole month!

Last year I started doing 52 things in 52 weeks -- there are a lot of tiny objects on the list, and though I was ahead for much of the early going, I am now at 39 weeks and 33 projects. But maybe when the 52 weeks are over and {ahem} I have finished all those things I have started, I might just try to think of 12 major things to make in the next 12 months.

I could probably come up with a short list right now:
There! Now, let's see what happens in the next 13 weeks while I finish up my 52 in 52, and we'll check in on this grand scheme again.

In the middle of writing this I realised that I'm not going to start polishing off UFOs right this minute: first I have an H to make for the Poetry Society. I got this far before getting distracted...

Getting distracted is the one major danger to plans like this, I find.

So, for the immediate future, I will finish the Skiers and my H. That's all I'll say just now!
Posted by Mary deB at 8:55 am 5 comments: