We were away for three weeks, in four distinct places, plus driving in between a couple. I'll just show you a few highlights. 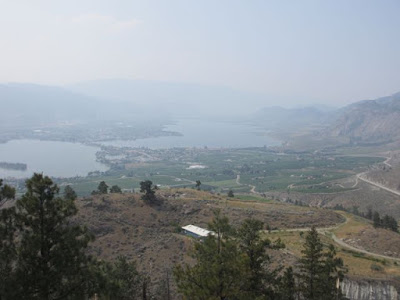 When we first arrived in the Interior of BC, there were forest fires all over the place. This is as we left the Okanagan Valley heading sort of east and south. Everything was hazy and we were all hoping for rain the whole trip.

We stopped in Castlegar and saw lots of family, then to Victoria where we saw family and a museum and beaches and water and trees, but somehow I didn't take many pictures. The big event in Castlegar of relevance for a knitting blog was when I managed to slam the door of the car on my right index finger. Hmm, maybe that affected not only my knitting but also my desire and ability to press a shutter button.

Our last week was spent in a cottage at Tofino, on the west coast of Vancouver Island. On the drive there from Victoria, we stopped at Cathedral Grove, which I remembered from a school field trip in, um, 1972? There's a park website and another one that's quite informative. Big trees, like this: 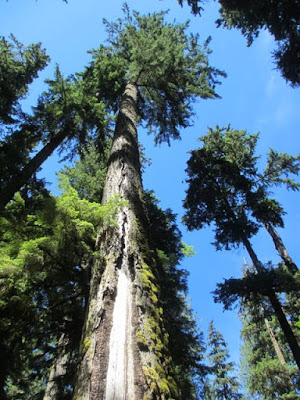 Hard to tell, but this tree is very tall and likely several centuries old. 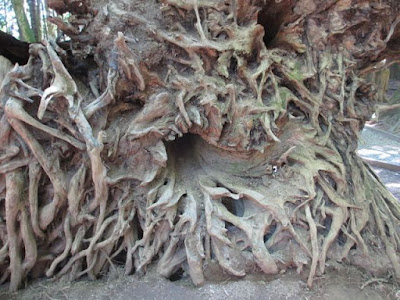 Obviously this one has fallen over! There are fallen trees everywhere, with newer trees growing up from them. There was a big storm in 1997 which knocked out a lot of the trees.

The park is quite old and the parking lot is tiny. Of course, making a bigger parking lot would mean cutting down a tree or two, so that is not going to happen. So you are zooming along the highway (well, it is a two-lane through the woods, so you are not really zooming very fast) and then you notice a few cars parked along the edge of the road, and then you see designated parking spaces for maybe 50 or 60 cars. Logging trucks are making their way across the island, RVs and trailers are parking and backing up to leave, tourists are sauntering across the highway. The whole thing is crazy-making. But we luckily found a place to park and did enjoy our walk along the paths.

Further along the road we came across Walley Creek, which is another little thing at the side of the road that proved to be a ton of fun. The creek, and it is not a very big one, goes through these enormous rocks. The kids leapt about, scaring their dear mother to bits, but no one fell in and no one broke any bones, so I guess it was just all good. 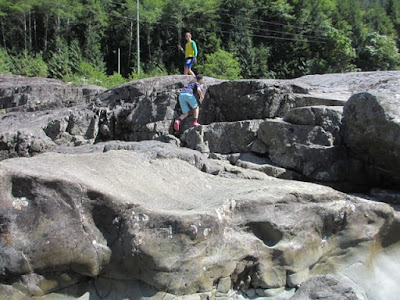 Elaine was stymied by this big one, but she made a valiant effort. And in Crocs. 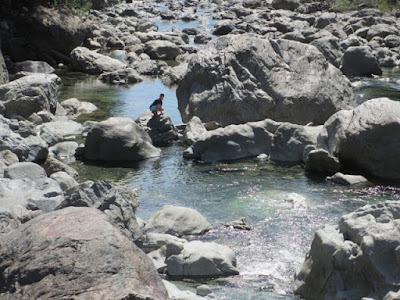 We made it to Tofino and to our little cottage. Like most popular vacation places, the accommodations were booked up ages ago, but I just happened to be looking for a cottage when someone had cancelled a week here, and it was the only thing available! It was great, we had a big yard, enough sleeping space, access to the hot tub... 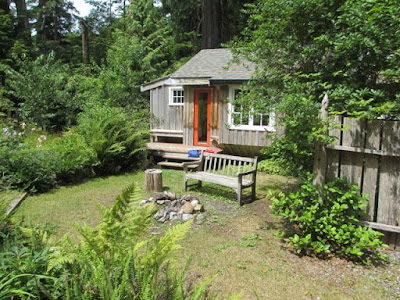 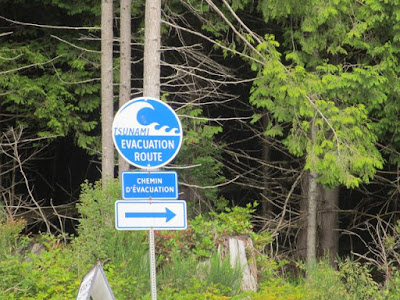 These are for real, tsunami warning signs. The place is right on the outside of the continent, with dangers from local earthquakes and from tsunamis from around the Pacific. All was calm when we were there, but I did get a shirt. It looks like this, but along with the guy running for higher ground, there is a little surfer dashing into the wave. Tofino is full of surfers, or at least people in wetsuits bobbing in the waves. We didn't actually see much surfing!

One day we went to the Botanical Gardens and saw an artichoke, among other things. 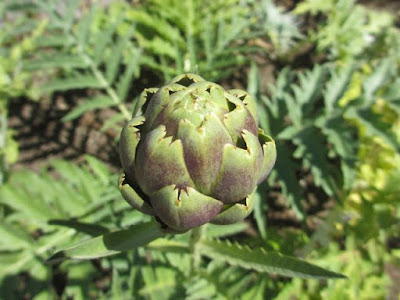 And one day we went to a bog, where the soil is very acidic. It reminded me of Sleeping Beauty with all the twisty trees... 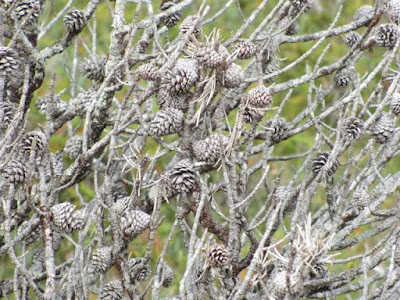 But really, what we did most of the time was go to the beach. We rode bikes on the beach. 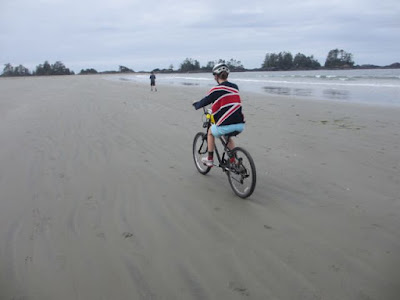 We went to the beach in the fog. 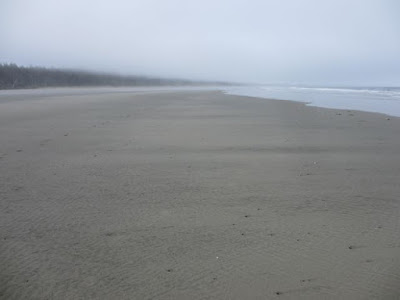 We collected pretty shells and rocks (and seaweed), but left most of it behind. This collection was inspired by a painting I saw in a shop. Could use more reddish rocks, but one works with what one has. 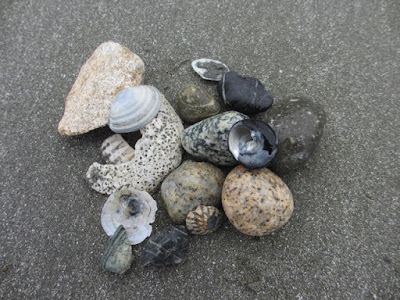 And we went to the beach at sunset. 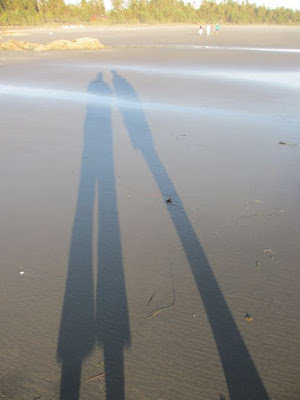 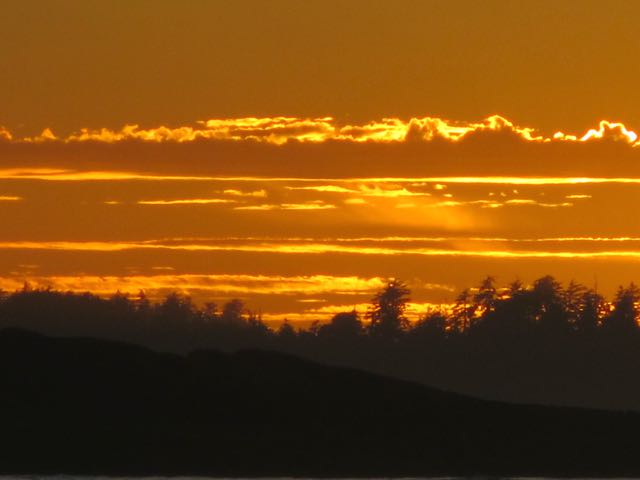 Well, we went on holiday. I took a ton of knitting and good intentions of having at least half a sweater done when we got back.

On Day 3, I somehow managed to whang my right index finger in the car door! This put a stop to all handiwork, lemme tell you. I do have a picture of it somewhere, in all its purple glory, but it's mostly better now.

When we got back I had almost three weeks of temperatures to record in my scarf, which I managed. My finger only really bothers me doing things like typing (!) and putting pressure on the very tip. So I shall work up some more knitting as soon as I can.

Arthur is off to university in the fall and I feel he should not go barefoot, so I have decided it is time to get to the darning pile -- easier than making whole new socks, I hope. So I imagine I can do my ridge on the temperature scarf, a bit of darning, and still get in a few rows now and then on my Action sweater.

I also have something like 1,000 pictures from two cameras to load onto the computer and admire... We've been back almost a week already and I'm just getting my land legs here.

Will post more soon!
Posted by Mary deB at 10:34 pm No comments:

There will be a new sweater

I am well on my way with my summer project of Action! My Plan of Action is to carry this plain stocking stitch knitting with me all over the place this summer, and to end up with a nice fall sweater just in time for fall. How about that?

This is the yarn: some ancient black Denim I bought on eBay some time ago. It is no longer made and is meant to fade delightfully. I really wanted to do something textural with it, so that the fading was more pronounced on the bumps and cables and nubbins, but I also wanted a super-simple project. This should still leave me with about 10 balls of it, so I am not giving up yet on the cabled gansey masterpiece. 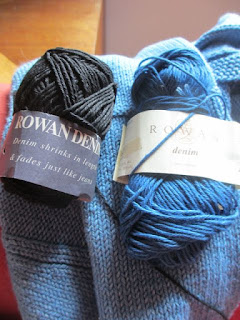 I also need a few balls of dark blue and a few balls of lighter blue. I am using an old Denim cardigan, also bought some time ago on eBay, for the lightest, but I suspect the yarn is in fact the same as my other blue, after just a few washings to fade it. There is a very pale Denim, but I think it is even paler than the sweater I am unravelling.

This pattern calls for the reverse stocking stitch side to be the right side, and also the pattern tells you to just secure the yarn ends and then leave them to fray, here and there. I think I won't do that! And I am still not sure about which side will be shown. 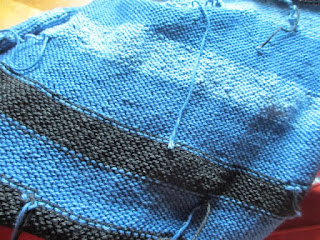 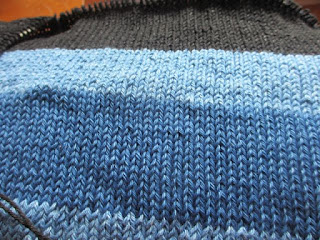 For now I am finished with the stripes, just plugging along with black. Boring, a bit, but also fast. (Ducks to avoid smiting for being hubristic.)
Posted by Mary deB at 8:28 am 2 comments: