What is hard knitting? Nothing about knitting is really hard; all you do is wrap yarn around sticks and pull it through loops you made earlier. 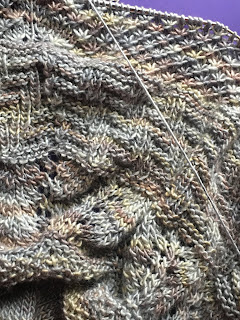 I am knitting a shawl now (oh, really? Big surprise!) and there are different layers with different stitches. I did the seed stitch, the lace bit, the "escalator." But this star stitch is biting me in the butt, as they say. 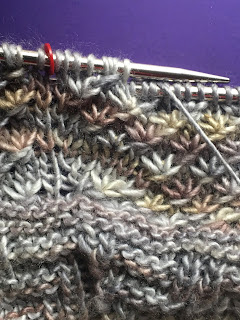 And there is nothing hard about it, except that I have to pay a tiny bit of attention. Purl three together but leave them on the left needle, yarn over, purl the same three together again. 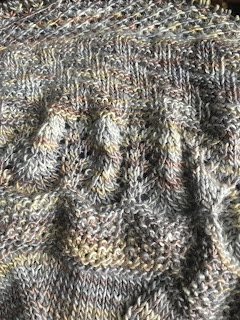 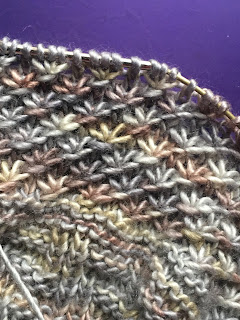 But every once in a while I find I have to unknit a whole section because my stars are not lining up, and that, it always turns out, is because somewhere on the last purl row I just purled the three together once and carried on.

I hope to show you the whole thing before too long; I am almost finished the star layer!
Posted by Mary deB at 5:41 pm 1 comment:

We left Cambridge on a coach at around noon; we got to Heathrow some time after 3; we hung around till 6 and flew home. Although it was only the 7th of December, Heathrow was all Christmas'd up. 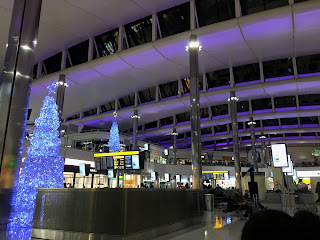 At home, it had been a weird fall, and leaves had fallen, snow had come, more leaves had come, things had melted, and everywhere there was a layer of rotting leaves under mushy snow. We did manage to get four bags of leaves out for the city's very last pick-up of the year. This picture was taken a couple of weeks ago now, but it kinda looks like that now, too, minus the leaves in the back yard! 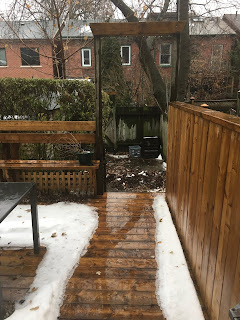 When we left, this place was a concrete parking lot and basketball court. It's a yard at the local under-used Catholic school. Finally the school board and the city and the neighbours have agreed on something and we are getting a park. 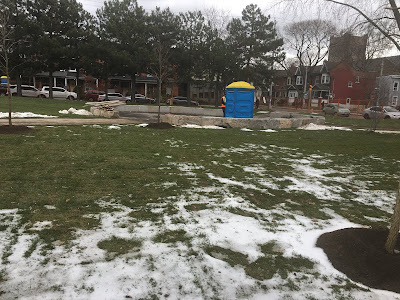 Meanwhile, the last of the big Manitoba Maples on our block has come down. It was not healthy, and the people who lived under it were afraid that one day it would fall on them. People have planted trees in their yards, but it takes 70 years or more to get a tree like this. 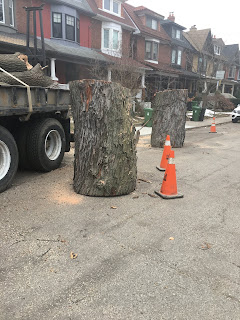 And now we, too, are all Christmas'd up. I've put some little lights in a jar. which Elaine called "hipster," and we have the same old stuff on the same old fake tree, so we are set. 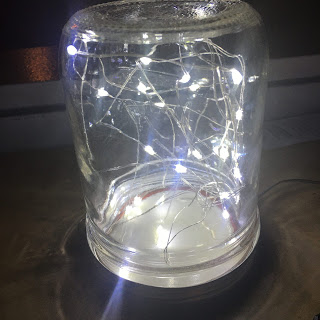 Things were very foggy this morning, as I walked to the store to get provisions for our last couple of days here. 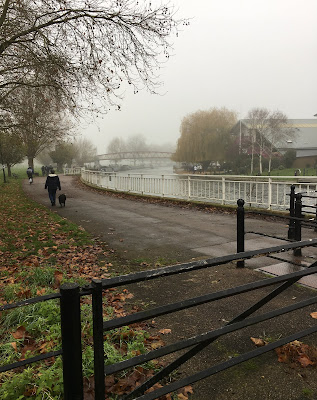 It was also very busy, although it was not the ideal day for activities on the water. 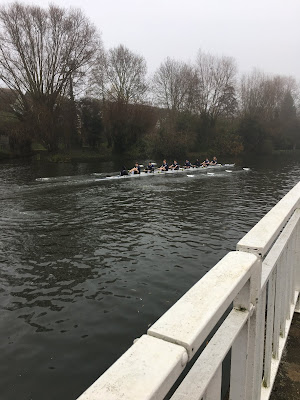 This boat had got itself stuck behind the moored boat and had to find the way back into the channel without banging into it. 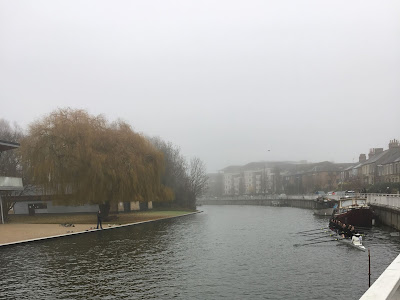 When I got home, I did a bit of searching and think I must have seen the beginnings of the Fairbairn Cup races. More of that tomorrow, as it seems!
Posted by Mary deB at 5:58 am No comments:

Calling this one done

I finished the knitting of the Westknits mystery knitalong weeks ago, but now I have finally dealt with all the ends. A wash will have to wait till next week, but I'm saying this is done. 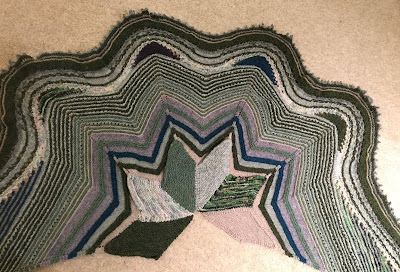 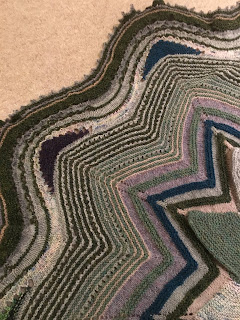 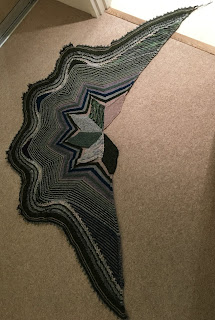 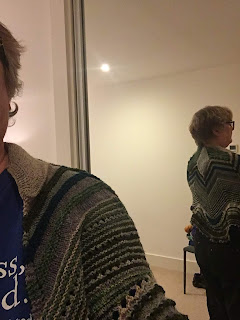 Today we went to the Wren Library in Trinity College. 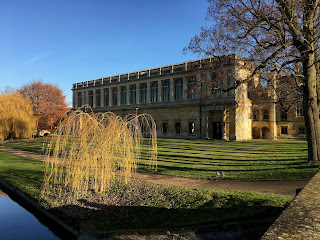 We weren't allowed to take photos inside the building at all, and in fact the guardian at the door told us to turn off our cell phones before we went in. 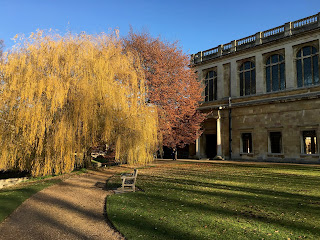 I remember pictures I'd taken in 2005, which of course are memorialized forever on the ancient blog! 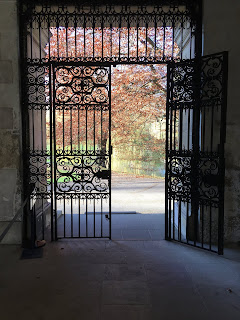 We saw the only known example of John Milton's handwriting. Holy cow. 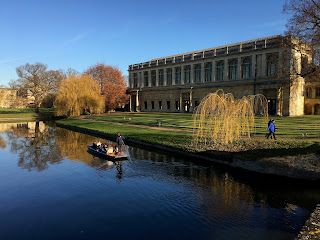 And letters from Arthur Stanley Eddington about seeing an eclipse which proved Einstein's theory. 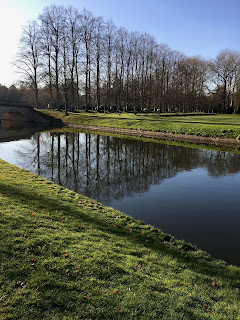 And the beautiful building itself, the walls of books, the floor, the ceiling....

Luckily we can look back a bit at the pictures I took in 2005.

I finished the brown scarf properly, and tucked away all the ends. 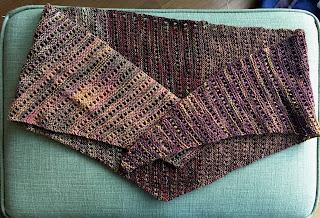 I also finished a hat which I had begun long, long ago. I think I knit on it on the plane over here. Then it got put aside for more pressing things, but suddenly I found myself with only it on the needles! One afternoon in the pub, and done! 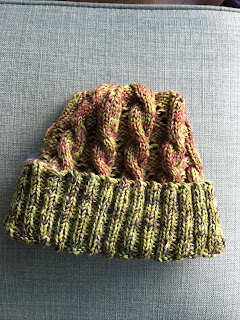 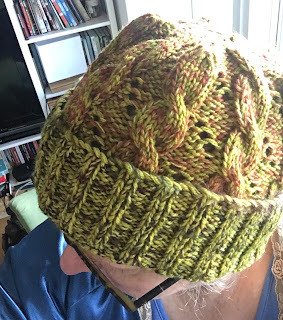 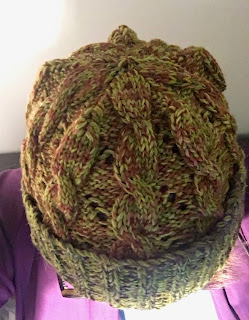 The decreases at the top make a rather good star, but with rather horrible bumps in between the points, because the decrease is sudden, every row instead of every other row. I have tons of yarn, I could have made it softer, but will not rip back now. I assume things will soften up with a wash and some wearing. 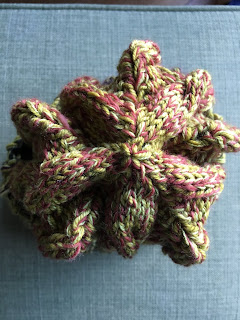