From muffins to movies

It is time once again for the Hot Docs film festival. My cup runneth over already!

A couple of weeks ago, I got to see a sneak preview of Three Identical Strangers when the cinema showed it to donors, and Stephen and I saw it again last week. Really, really good! I can't tell you much more than is in the blurbs without giving some good stuff away.

A young man goes to college. On his first day, people recognize him although he's never been there before; they call him Eddy, but his name is Bobby. He meets Eddy... his identical twin he'd never heard of before. They get in the paper, and a guy named David says, hey, they look just like me! So, identical triplets all adopted by different families in the New York area. The story is quite amazing. 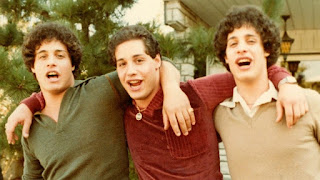 They did the wild 80s disco thing, they were on all the talk shows, they opened a restaurant... They realized that there were things they did differently. And after a bit, things sort of fell apart. The director was at the show last night and it sounds like there are about a million movies they could still make: each triplet had a family they spent 19 years with before they knew about the others, so there are all sorts of other people involved in the story we didn't learn much about; there are wives and children; there are the politics of adoption and psychology; and there is the fifteen minutes of fame story. So, so interesting!

Friday I volunteered at a Docs for Schools day. We saw two movies, Mercury 13 and Don't Be Nice.

Mercury 13 is on Netflix in Canada, so you can maybe see it for yourselves. It's about women pilots who were tested and trained to be astronauts, but clearly, since none of us had heard of American astronauts in the Mercury program, things didn't work out there! Again, so many stories that don't fit into 90 minutes of movie.... The kids, including grade 7s and 8s, were mostly interested, but there were a number of "bathroom breaks" that lasted a while, and some squirming in seats.

The afternoon movie, Don't Be Nice, had them all glued to the screen! These were all high school students, and they were completely spellbound. The movie follows a team preparing for the national Poetry Slam competition. Competitive poetry slam is practically a sport, and quite different from just reading a poem. They had coaches who encouraged them to dig deep, get personal, tell their own story. One of the results was this, Google Black. This isn't from the movie, but they did this poem in the movie. Contains questionable language.

As a volunteer, I get a voucher for working a shift, and usually one voucher will get you one free movie. They also offer certain shows as 2-for-1, so a friend and I went to see Mr Soul! on Saturday at 10 am. Soul! was a black variety show on American public television, in the era of Leave it to Beaver and Gunsmoke. So much music, talking to Toni Morrison, a young Arsenio Hall, poetry, art, dance, rabble rousers and great thinkers. And such perfect afros. (I wanted to just put up a picture of Kathleen Cleaver, but now I must send you to that page to read more about the show and watch some clips.)

Right now I should be making a birthday cake for my dear husband, but I think first I'll post some dishrag pictures. 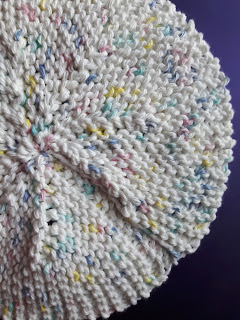 This is a round cloth, a bit small for dishes, I think, and it is made of baby pastel cotton. A spa cloth? Something for a new baby? I knit is last night while listening to a friend's band play some jazz in a Mexican restaurant! 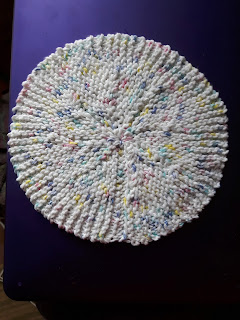 This one was started for film festival knitting. I have seen four movies but not stood in very many lines. 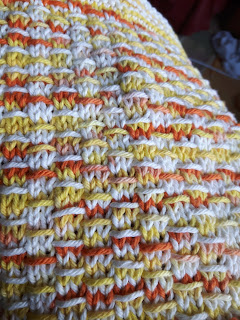 Quite a nice pattern, but I'm not fond of pretty, pale colourways for dishcloths! My practical side just knows it will look like crap after a few washes. And those slipped stitch floats: will a knife point get caught? 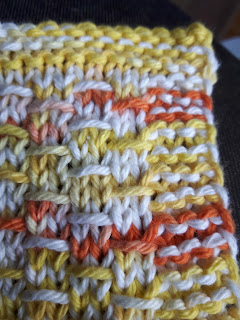 I have started a post about this year's Hot Docs festival but haven't got very far. I can tell you I have seen four really good movies, and that I will update you soooon!

The funny thing about these Miracle Date Nut muffins: there are no nuts! Nutmeg, yes; nuts, no.

I had to use up the second half of my jar of Miracle Whip, so I made these muffins, the second (and last) recipe in the book to use it. As it happened, I was a bit short (Did I put too much in the previous muffins, or did some get used in a sandwich or something?) so I topped my cup measure up with mayonnaise.

I bought dates, but the package (the brick!) said "pitted dates," not "chopped dates." So I had to hack at the solid mass of sticky dates, with moderate success. I'd say the dates could have been in smaller pieces. You pour boiling water over them. I wonder if I should have tried to chop them after that. I'm sure there is another date recipe in the book so I'll work on that.

The bit of spice perks things up, and the texture of these muffins is okay, unlike the banana ones. I think it might be because there is half a cup of bran in, which gives them some heft. Still, I am waiting to discover a new excellent recipe.

On Wednesday I go out west to see family. I had hoped to have my new green sweater to wear, but I still have to not only sew the sleeves on, but also make some sort of button bands or front edging. I am going for 6 days, so of course I had the whole coffee table covered with possible knitting projects!

Ah, these are our standard muffin. I have made gazillions of these over the years. Elaine ate two of them before I even noticed. They will all be gone before too long. 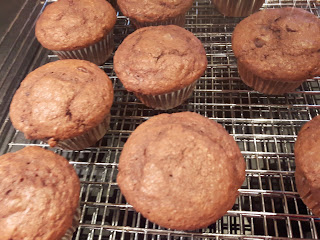 This recipe is almost identical to the one I have, except mine calls for twice as much sugar! My recipe also actually calls for carob chips, for that healthy edge, to go with the wheat germ. Ha ha, who uses carob chips?

I like that years ago I noted "good" in the top corner. Now one can just go to the most splattered page in the book. 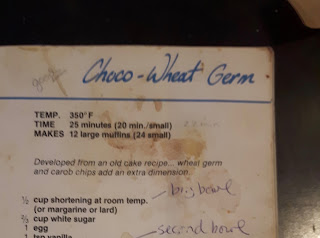 My last adventure in muffins was the banana and Miracle Whip ones. I think we had a muffin supply already, so most of those went into the freezer. When I thought we needed more, I brought the whole lot out at once. Big mistake. They had an icky texture and no one was eating them but me. The last 4 had to be tossed. I still have half a jar of Miracle Whip and do mean to make the other recipe in the book that calls for it. Fingers crossed!

And for your Today in History: this would be my dad's 100th birthday!
Posted by Mary deB at 9:03 am No comments:

This is not some weird miniskirt, but a cowl to keep someone's neck warm. Warmish... it's mainly acrylic and cotton so not super warm, but it is an extra layer. 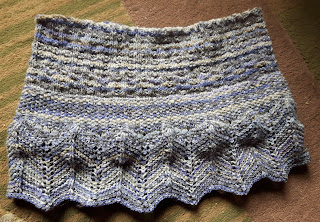 Must work on my selfie skills; I had to crop most of this picture away. 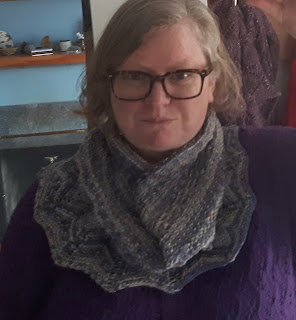 Now I can knuckle down and knit the sleeves of my green Wakanda creation. I see that I have been remiss about showing you that!

Some of the back: 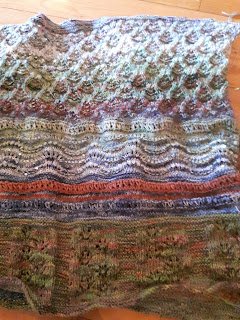 Top of the back (you might be able to see the twinkle of a sequin or two here): 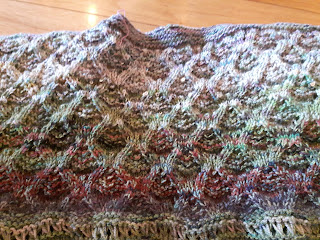 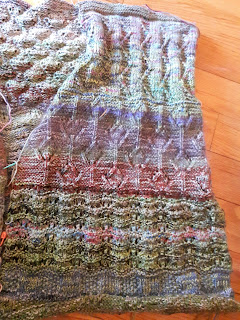 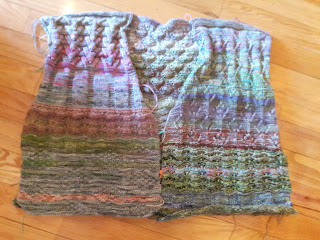 I've sewn the ends in on all that, and washed it so it lies flatter and has smoothed out a bit. I have about half a sleeve. I am going to visit family in BC in a couple of weeks and would love to have this done by then.
Posted by Mary deB at 7:00 am No comments:

Once upon a time I knit this sweater. It is cotton, brightly coloured, lacy. 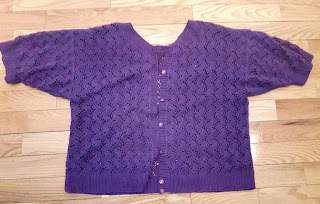 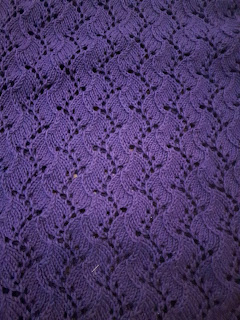 An all-over pattern like this would drive me nuts now, and I would want to throw in a cable or something, but I persevered, and isn't it nice! 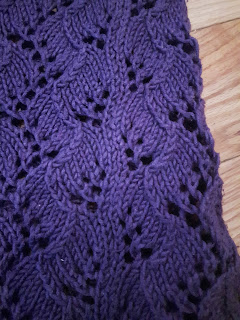 I think this was one of my first times using mattress stitch for seaming. Look how smooth and secret that seam is! Really, I am so clever sometimes.

I am posting this because I recently looked in at the Vogue Knitting group on Ravelry, and they are doing a thing where they knit pattern #18 from any VK magazine. This, as it happens, is #18 from Spring-Summer 1987.
Posted by Mary deB at 10:29 am 1 comment: