The lamp is finished.

I used every single jump ring, but still have hundreds, if not thousands, of slides left. 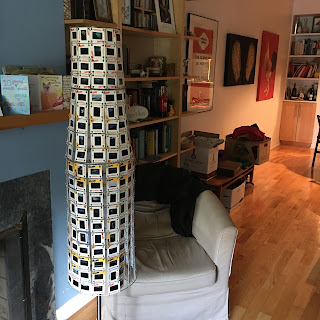 The bottom row of slides attaches to a big ring, but I only had enough jump rings to attach one side of each slide. I had to use the smaller ones for that.


Not only will this lamp remind me of all those journeys and past adventures, it will remind me of COVID-19 and these days when you can't just run out to the bead store for more jump rings! 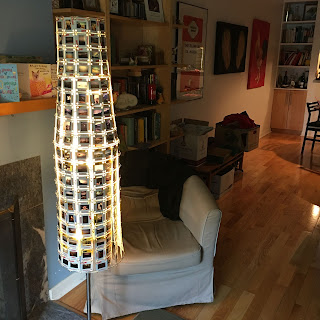 More than three things I am using these days

It is too hot to knit, so I am spending a lot of time on the slides lamp shade.

Here's how it is done.

Go through the huge bag of slides and find different sorts. 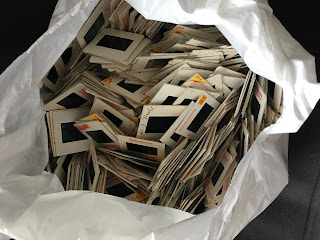 I don't care what the picture is (though I originally was doing blue pictures: mountains and sky and seascapes) but look at all the different frames they have. 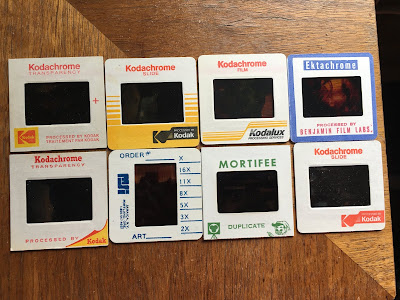 Step two, and the one I so often forget about, is put a bit of white paper on the back. This diffuses the light so that you don't get little lightbulbs in the middle of your picture. So, I cut paper, tape it down. 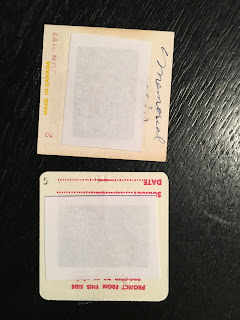 Then we get the hole punch. This is probably for scrapbooking or some delicate craft like that, and now every time I use it I think it is going to break. 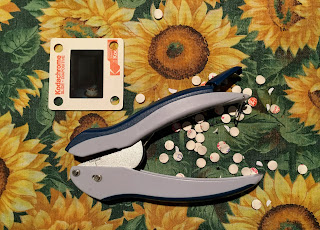 I have 80 more slides, four holes on each, left to do. So, fingers crossed. I have recently discovered the slides that have blue frames and I want to include them, but they are a tiny bit thicker than usual and Mr Hole Punch has a hard time with them. Saving them for last, I guess!

Another thing to note is that it is hard to make the holes in the same place all the time. This leads to wobbly lines of slides. Precision is your friend, but perhaps too much work! 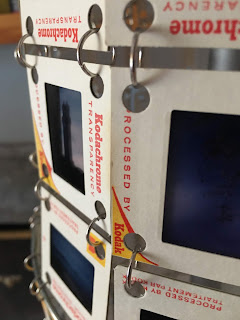 The slides are attached with 12 mm jump rings. Some, actually, use 10 mm rings, but that is a mistake and if I could do it all again, I would have bought a million rings at the beginning, instead of a wee bag of 50, and then another bag which turned out to be not the same. My recent purchase of 400 rings turns out to have been barely sufficient, so the few remaining 10 mm rings might just get called in to action. 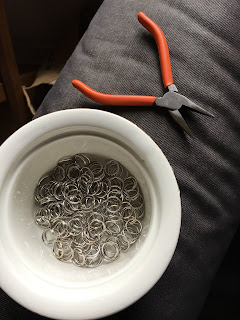 The pliers are indispensable here. My lefthand fingers are kind of wrecked from holding the ring, and I wish I had two pairs of pliers!

I hope to have run out of rings in a few days, and then we'll say this is complete!
Posted by Mary deB at 12:59 pm 1 comment:

When last we spoke I was about to go make some cinnamon buns. That didn't work and I will tell you why! It's because I put all the ingredients into the bread machine, pressed the button and let it do its thing.

Unfortunately, I pressed the button for "French bread" rather than for "dough." When I realized my mistake, I didn't know when I could stop it, was it mixed enough, had it started cooking it, what oh what to do? I left it to cook my sweet dough into something like French bread, and of course it was eatable, but not a batch of cinnamon buns! 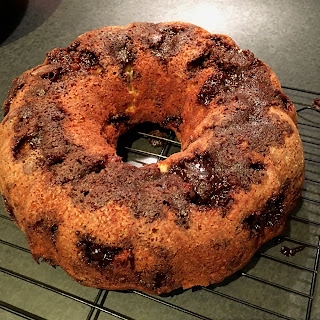 Since then I did make a lovely chocolate coffeecake, but I have not ventured into bun territory again. My 5-kilo bag of flour is actually almost empty now, too!

Um... I guess I have been just working away at the baby blanket, which maybe I haven't told you about. It is getting to the boring stage, after the frustrating stage and the no-problem stage. 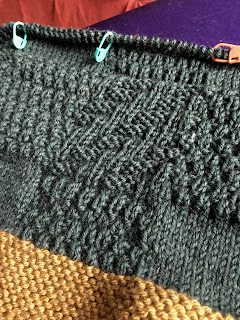 It's a 1989 pullover pattern from Vogue Knitting, just knits and purls arranged to look sort of plaid.

I think the baby will love it, especially if I soldier on and make it a decent size, instead of finishing it off now because it's beginning to bother me. (That picture is old; I have at least twice that length now.) I have another ball of the green, and the gold for a border, so it will be great, don't you worry.

I've also been swapping old patterns for new. Someone on Ravelry wanted menswear patterns, so I sent her a bunch, including my 2002 Vogue Knitting men's special issue. She, in return, sent me three electronic patterns, for fingerless mitts, for a big sweater and for a Stephen West shawl!

Someone else wanted doll's clothes patterns, so off went two booklets. She is stuck in some paypal limbo but I expect a little something from her as well. 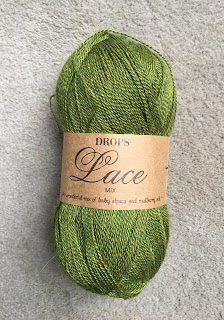 I am reminded that I have this beautiful green laceweight yarn that I bought in Vancouver, just waiting to be made into something, perhaps a light and lovely cardigan for me. We'll see what comes of that! 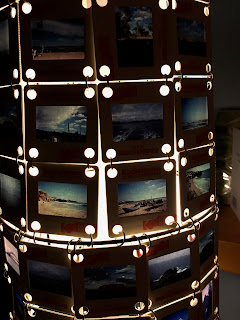 I have got out my 9-year-old slides lamp project! Now I am waiting for more jump rings to arrive in the mail from my favourite bead shop so I can continue with that. 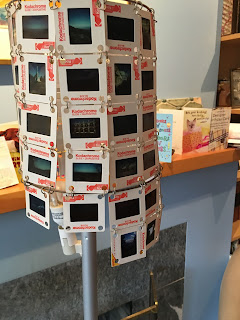 And so we continue with our lockdown lives. I have just learned that the second neighbourhood supermarket has closed for cleaning for the day because someone on staff has tested positive. Lucky we have a freezer and cupboards full of stuff, even if I will run out of flour in a week or so! And I did want some green onions... Ah, we will manage for a day or two! And while I was writing this, my jump rings arrived in the mail, so I can crack on with my lamp.

It is the best of all possible worlds, obviously.
Posted by Mary deB at 11:45 am 1 comment:

Okay, it's Thursday, it's time.

A bunch of pictures of my new scarf. 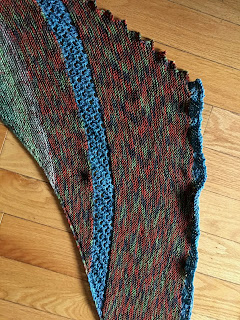 It has a sawtooth edge and a couple of lacy bits. 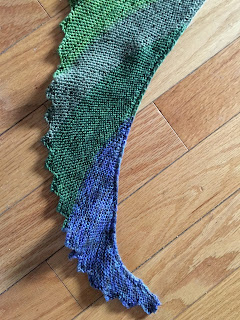 It has many colours! 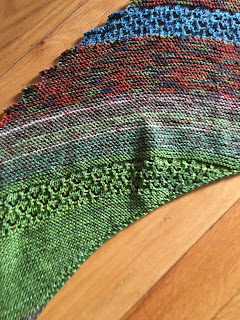 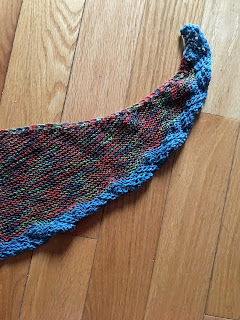 It's sort of crescent-shaped. 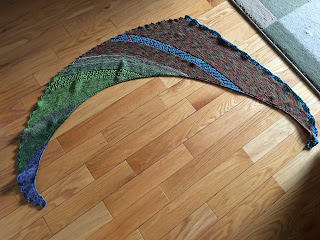 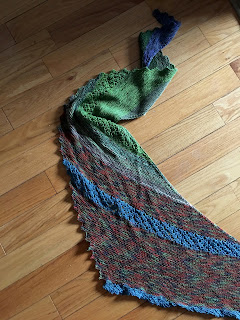 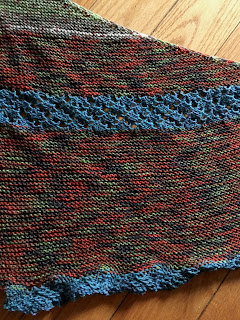 We hope that it is getting to the end of scarf season, though! It snowed the other day. It's grey and crappy and not above 15 degrees. It's the middle of May, for crying out loud! 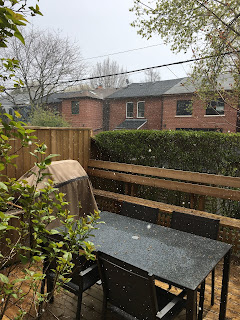 I have been going out more, trying to get in a decent walk once in a while. Today I should have been on the blustery north Norfolk coast, looking at rocks and waves and birds and pub dinners. If I was just now dropped into that situation, I would be so sore and blistered and aching, because I have not kept up my practising. I suppose I have another year to get to it, but I do mean to put a bit more oomph into my local walking.

Right now, I am making cinnamon buns. In, um, 1978 or so, I ate about a million of these while at university. We shall see if these match the cinnamon bun in my mind!

I hope everyone is keeping well. And not too stir-crazy!
Posted by Mary deB at 11:02 am 1 comment:

Here we are, another Thursday.

We came from Vancouver six weeks ago. Spring is finally coming to Toronto and colours are visible here and there, although we now have a week of cold weather. 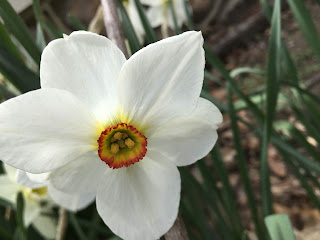 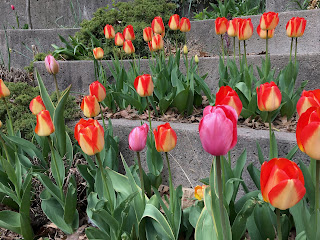 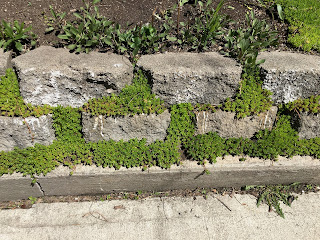 I did finish a knitting project, after some fussing around. 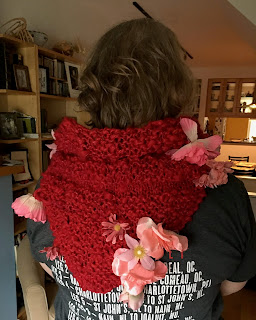 This skein of yarn has flowers added in at random intervals. Random, yet somehow never in the right place! I made most of a cowl but a lot of the flowers ended up on an edge, and I knitted it a bit tightly, so I ripped it and tried another shape. 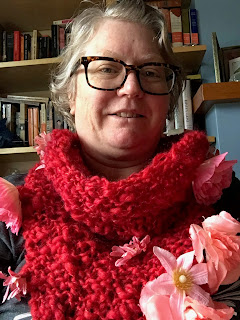 Now all the flowers ended up at the edge of the triangle. And I didn't have enough yarn to make the part around the neck very deep. 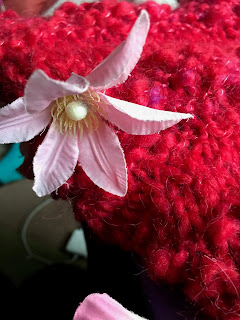 But it could be called versatile? You can certainly wear it in a couple of ways! 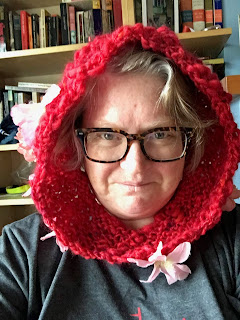 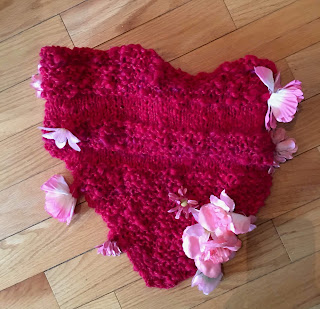 I saw a recipe for dragon eggs on twitter, involving chocolate, butter and eggs, so gave it a try. (You might have to click "show this thread" to get all the info.) 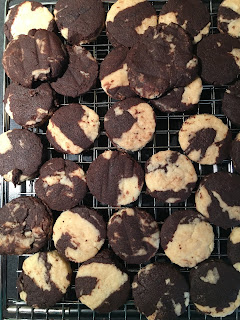 
Today I might just take part in a zoom exercise class a neighbour is running. So, that's something to look forward to. We also bought a pot-roast on our last trek to the grocery store, so either today or tomorrow we will have a very nice meal. And I am very close to finishing another scarf, and starting a project that might just last me the rest of the summer.

Until next Thursday, then!
Posted by Mary deB at 8:42 am 1 comment: