Another hat and so on

Once upon a time I was invited to a knit night with some neighbours. The person whose turn it was to host was someone I'd never met before, but the knitters were all very friendly and I went along. Actually, I google-mapped her house first because it was a bit outside the immediate hood, and then I had not only knitting reasons to go, but real-estate-gawker reasons as well.

When I had young kids, I would aim to go out around 7 and be back home for bedtime, but these modern folk seem to stay home till the kids are in bed and then head out, staying out knitting and whooping it up till all hours. So... I am always first to arrive.

I got to my very lovely destination and my hostess, in between running around with family, asked if I would like a drink. We eventually ended up in what I think of as her "would-you-like-a-drink room." Close to the kitchen, dining room, living room and family room, it was a large pantry with a fridge, snacks in the cupboards, a wall of bottles and glasses for all occasions. I'm sure I was gawping.

And, in order to have something small and easy to knit on, I had started a hat. Which I have now finished. More leftovers from the Temperature Scarf. 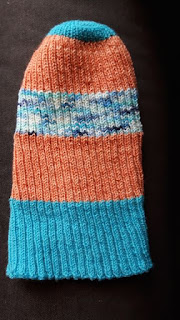 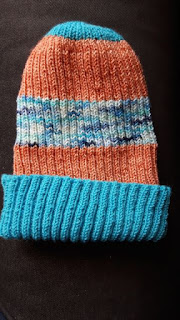 Arthur kindly modeled for me, although it's a tad warm these days. Yes, it matches his hair. 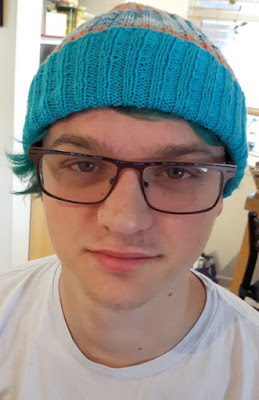 Some knitting and perhaps some sewing

I am still plugging away at this cotton shawl, although it is often too hot to work with most of a shawl sitting in my lap. 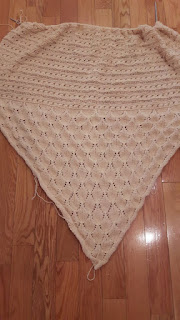 I did the triangle bit for a while, then I switched to some "Peruvian Lace" for a straight stretch, and now, with 4 balls of yarn left, I am starting to decrease to a point again. 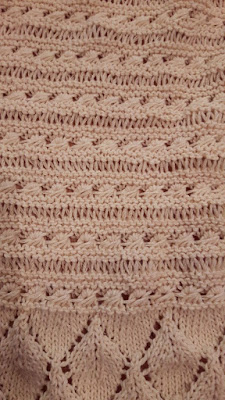 Nothing to show of the new part. I have done a few rows of a simple slanting eyelet pattern, and will decrease only on one side, so the whole thing will be not only in three stitch patterns, but also asymmetric and lopsided. I hope it is long enough! I am going to BC in a couple of weeks and would like to have this done for then, for strolling along the beach in the evening and so on. 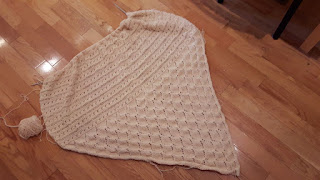 Another thing I would like to have done for that trip is a bag made of these scraps of jeans. So far, this is all I've done, although there are ideas whirling about. I hope to have something to show in a few days. First thing might be to make all the pieces about the same size.... hmm. 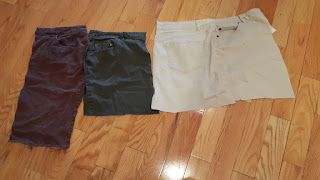 Quite some time ago, like almost three weeks ago, I went to the Textile Museum volunteers' annual sale. It was such a madhouse this year, in a new, more cramped location, so I got out in a hurry and didn't get a whole lot of stuff. I did pick up some fabric that I think I'll make a skirt out of, and a couple of books, including Rowan 7 for a dollar.

I also picked up a bag of wool bits. It looks like someone made a fancy-pants fair isle thing and gave their leftovers to the museum sale. 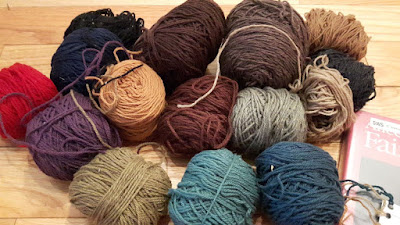 The marvellous thing is, they included their cheat-sheet, with the poetic names of the colours. Curry, lagoon, nut... red. It's about 250 grams altogether. 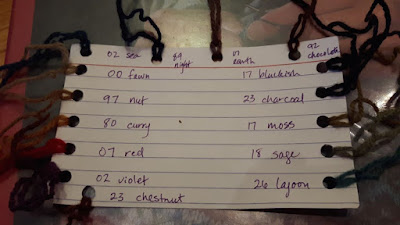 I think I will start with a pair of Alice Starmore mittens. Maybe for an Olympic project this summer? If that doesn't drive me crazy, a hat.

My friend also went to the sale, and also bought some odds and ends, and then had a change of heart and just gave me the bagful. Since I hadn't chosen this yarn, hadn't paid for it, had no allegiance to it at all, I dropped everything to knit with it. Weird how that works. It was so cute in its little skeins. 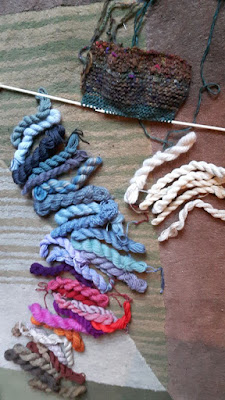 See how quickly I thought, "Ah, I should take a picture for the blog."

I mixed most of those whitish bits in with the finer yarns. There were a couple of bits of mercerized cotton I didn't include, and a pale blue chenille that was just not right, but everything else got made into a (not very big) garter stitch scarf.

I didn't get very far before I got bored and did some short rows to make a triangle of light blue. 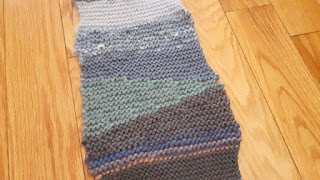 Some eyelets even appeared later on. 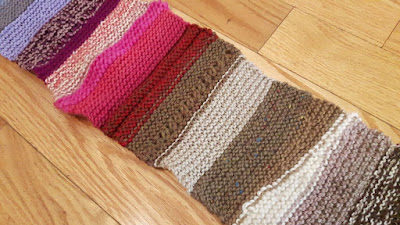 If I were doing it again, I'd use a slightly bigger needle. Actually if I were doing it again, I might knit really long rows, and change colours every row or two! There were so many ends; I wanted to leave them as a design element, but my kids pointed out that really they didn't look like anything but a bunch of dangly ends left by a lazy knitter.

I have more to show you! Maybe tomorrow!
Posted by Mary deB at 10:05 am No comments: