I am so scattered I almost forgot to blog on Think Write Thursday.

September starts off with a bang, of course. 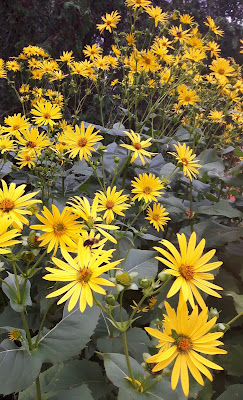 We have, in past years, rented a car to take Arthur and his stuff to Ottawa for school. However, it is quite expensive and it requires Stephen to spend two days driving up there and back, so this year we are just sending him on the train.

However, of course, he has a ton of stuff! Mainly a big computer. How do you put that in a duffel bag?

That is my number one concern today, I'm afraid. 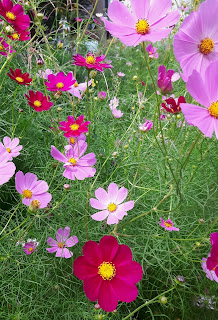 I think I'll just have to use point form for the rest of the things. Maybe if I see the all written down I can apply some sort of order.

Find out what others are doing in September here.
Posted by Mary deB at 11:34 am No comments:

We have a deck on our top floor, too hot and sunny to ever sit on... So we sat on it for a couple of hours on Monday to enjoy the sun!

I took this picture as the eclipse excitement was winding down, but it shows you the set-up for the other pictures. We have Stephen in the shade with his eclipse glasses on -- just for show; he didn't wear them all the time! The contraption in front of him is a little telescope on a tripod. The bottom of the Macbook Air box is a screen and the top, which the telescope pokes through, shields it from excess light. 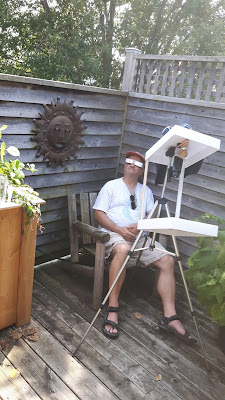 So what we get is an image through the telescope on the bottom screen! You will enjoy seeing the green masking tape holding a piece of white paper in place... And here we go...


Arthur had his big camera up there and we shall see what his experiments turn out like. Here he is just taking a picture of his dad. He really does cover himself with a black cloth so he can see through the camera properly. 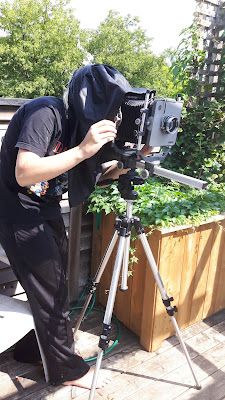 We did a few other fun things, like look at the crescents through a colander. 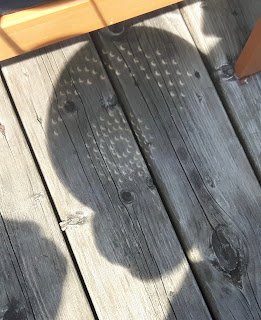 As we were coming in, we noticed the sun was lining up with the venetian blinds to make a nice row of pinhole images, with slightly fuzzy and biggish crescents. 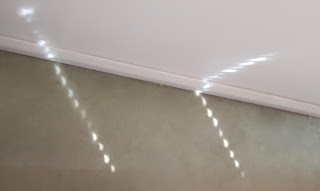 Today more big excitement as the schedule for TIFF is released. Not sure I can stand this level of thrills for too much longer!
Posted by Mary deB at 8:00 am No comments:

I'm making a stole from a vintage pattern. It, of course, says this pattern can only be made with the one particular yarn, but I am such a daredevil that I am not using some vintage fuzzy blend, but sock yarn bought on my southern Ontario trip last month, in the Confused Hydrangea colourway, no less.

The pattern is totally simple: uneven number of stitches, knit one, then yo, k2tog all across the row. Every single row for 5 and a half feet (or so). I believe this results in something called faggotting.

After a foot or so, I made a mistake! I was supposed to knit 2 together, but I missed the yo of the previous row. A gaping hole in my holey fabric! 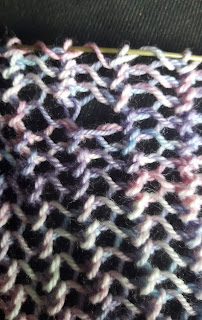 Since I am very clever and an experienced knitter, I thought I could just drop that couple of stitches down and pick them back up again correctly.

First step, put in a lifeline, so that if all goes completely awry, it will only do so to a certain point!

It's always good to put the lifeline in across a straight line, not on a slant... ahem. 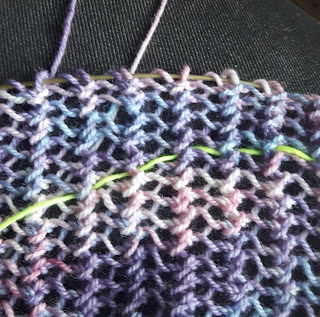 Here we have the tangle which resulted when I dropped the stitches down. 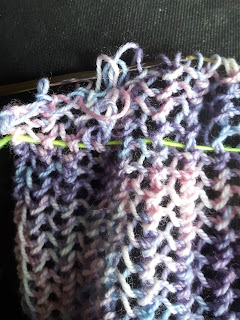 At this point I stopped documenting this project, because there was just cursing and despair until I realized I had to frog those few rows down and reknit it all. Since your nice vertical line of knitting is made with yarnovers on every row, some from the left and some from the right, it's very hard to know what strand goes where and when. At least, for me! 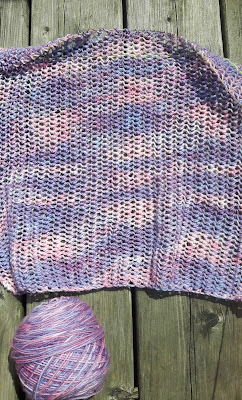 All's well that ends well. I'm leaving the lifeline in for a while, to see how fast (or slowly) I am actually knitting. I have a few hours of sitting at an info desk tomorrow, so I imagine I'll get tons done. We shall see.

I have some eclipse pictures to show as well! We didn't get totality here, but it was interesting to watch. I hope to get those up tomorrow!

It is Think Write Thursday again. Our topic for this week is to talk about what we do when we have "an abundance of tomatoes."

I live in downtown Toronto. Some people do have marvellous gardens full of tomatoes and sunflowers (notably my elderly Italian neighbour) but I do not. If I want an abundance of tomatoes, I have to buy them.

Of course, in our idealistic youth, we got tomato plants and did our best. We ran watering systems around, we put up chicken wire to keep out the squirrels and raccoons. We never had an abundance of anything, I'm afraid!

One year a friend gave us an extra little seedling, which grew and produced yellow cherry tomatoes. We stuck it in a corner of the front yard and let it be. It seemed to be doing fine. We kept finding those little, sweet, tomato bombs, and finally discovered that if we'd staked the plant it would be about 6 feet tall! It was just sprawled over the hostas, enjoying the tiny bit of afternoon sun and probably the water from the neighbour kids' water fights! Unfortunately we could never reproduce that.

Now, if I did have an abundance of tomatoes, I would make a tomato quiche. I'm sure I once had a proper recipe, but I will just tell you what I do.

Get a pie crust. You can make it or buy it!
Cut up some onions and cook them a bit, add some tomatoes and herbs of your choosing, cook some more.
Beat up 4 eggs or so, with some milk.
Grate some cheese; any kind will do, but Swiss is nice.
Put the cheese and the onion/tomato mix in the crust, pour the eggs over, sprinkle with some pepper and maybe a bit of extra cheese.
Pop it in the oven till it is done!

It's Think Write Thursday again. The theme today is Hello August, and I think we are by now settled into our summer.

We don't have as much planned for this August as we sometimes have in the past. No trips until we send Arthur back off to university. No visitors planned, but of course if anyone wants to drop in, we'll fit them in!

I did finish June's vintage knitting project, and I did get July's started before the end of the month!

A warm knitted hood, and the scarf part ties at the neck so one is all cosy. However, it is the middle of summer so I'll put it away for some months now.

July's project is a pair of socks for Arthur. So far, about 4 inches of one sock!

August's vintage project has not been cast on, but when I asked Elaine if she wanted socks or a shawl from her yarn, to my delight she said a shawl/scarf thing. There are vintage shawl patterns, of course, but I don't want something as boring (though lovely) as this. I'm sure I have a suitable pattern somewhere!

Speaking of patterns, I just bought two Stephen West patterns: Vertices Unite, one of my all-time faves; and Esjan, to be knit in worsted weight for a real blankety shawl. So that'll be fun, some day!

Here are some more things I'd like to do in August:


I'd also like to blog more this month. It's good I have Think Write Thursday or I'd never post!