And now it's almost the end of June

My neighbour and I walked to the park with a coffee the other day. (I looked at my Visa bill online the other day and noted that practically the only places we spend money now are the grocery store and the local coffee shop.) This new park is nice and I should have taken a picture for you! It is on top of what used to be an asphalt "playground" at an underused Catholic school, and it is now a grassy space with benches and tables and even a young tree or two. I will make another trek to take some pictures.

The kids gave Stephen a new plant for Father's Day! 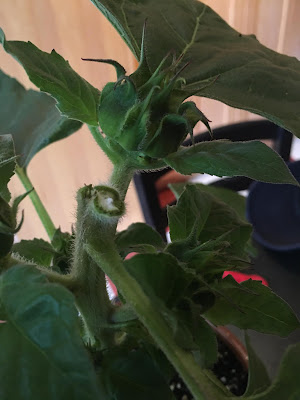 Too bad I don't have a "before" picture, since it was a lovely sunflower before the squirrel ate it! It's now an indoor plant, with a couple of buds on it. (Must be more assiduous with the picture-taking.)

Other things are eating our plants on the back deck, but sometimes we don't mind, like when one of these (or actually, dozens of these) eats our dill plants. 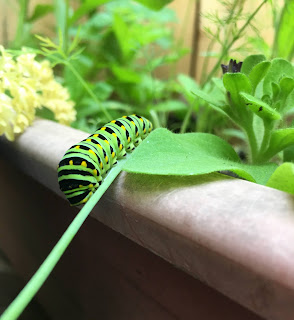 I believe they are Eastern Black Swallowtails, and I hope we get a glimpse of the butterflies one day.

I have some new knitting. This is the yarn I bought in Vancouver just before we left. 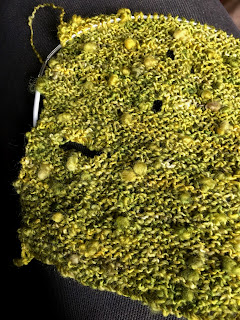 Apparently I didn't share this with you at the time, but I went to Fibre Art Studio on Granville Island and bought this single skein of lumpy Kermit-green yarn.

They squirted me with hand-sanitizer and I was the only person in the shop. I just needed a(nother) yarn souvenir!

Because it is lumpy, or indeed bouclé, I am just knitting it plain, without trying to do anything cabled or lacy or even knit/purl textured, except you can probably see a slit on the lefthand side there. I will put a few of these holes here and there, but it will just be a straight scarf. The colour and texture are exciting enough!

I will note that this week has been filled with turmoil and betrayal and distrust and woe on Ravelry. It is a long story, but it starts with an upgrade of the look of the site. Ravelry was always a bit cute, in a quirky sort of way. You would type the word cake, and a little picture of a cake would appear in your post. There were, at various times, probably a hundred of these little things. Taco, martini, Friday the 13th, mirror ball... would all make little images appear, and now they don't. (This is a minor issue, but it was something especially Ravelry that I really liked.)

The first things I noticed in the new (or ew, as some call it) look was that it is now overly cute, and made me think of an invitation to a 10-year-old girl's birthday party. New colours, new spacing, new navigation, who can handle that?

However, some other people got migraines and at least six people had seizures! The colour contrast, the huge white spaces, the animations on certain pages were actually affecting people's health.

These things happen... and then they should be corrected right away. But the Ravelry team (which is tiny: 5 people run the site for 9 million of us users) has been pretty absent. A blog post from the designer talked about how she loved the cutesiness of it, threads were opened for feedback but then locked, and no answers were given. So disappointing from a team that has been very open and communicative all along.

A survey was put together, basically asking us how much we loved things, with yarn balls with faces to signify answers from "love" to "hate." We then learned that our answers were not anonymous, but linked to our usernames, which also link to our purchases, for example. There are talks of lawsuits, especially among Europeans who have very strict rules about these things! 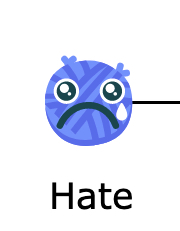 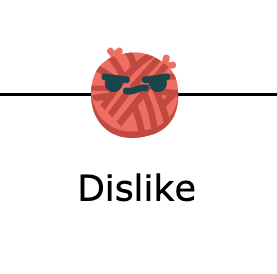 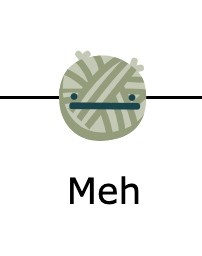 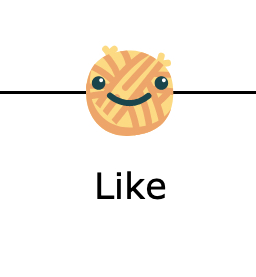 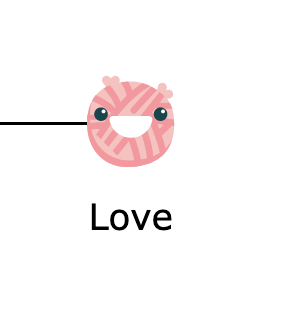 We'll see how that all pans out, but one lawsuit about causing seizures or violating EU regulations could kill the whole thing. Which would be terrible.

So, that's it from me, some knitting, a new park, a caterpillar and perhaps complete collapse of my main online community.
Posted by Mary deB at 9:59 am 1 comment:

A thing I hadn't done before

A couple of friends and I went out to Tommy Thompson Park, or as it is commonly known, Leslie Spit. It is a spit of land -- sort of land, made of concrete, bricks, demolished buildings, dirt they dug out decades ago when they made the subways -- that sticks out into Lake Ontario. Lots of birds, scrubby trees, green stuff poking out of piles of blocks of concrete. 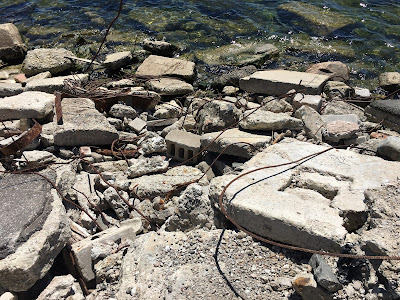 There is rebar sticking up all over the place, and people string worn, multicoloured bricks on it. 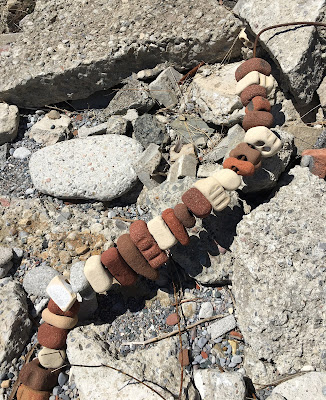 The city is waaay over there. 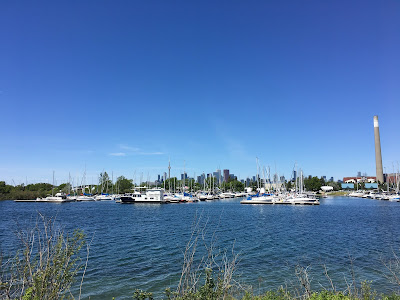 From the other side, you can just see lake off to the horizon. 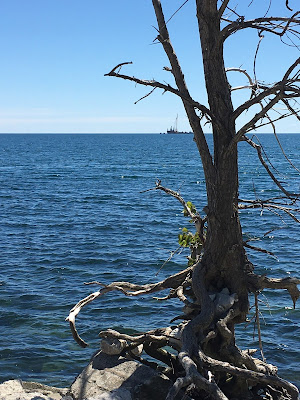 I found all these different colours of bricks. Worn by years of tumbling around. It's a weird landscape! 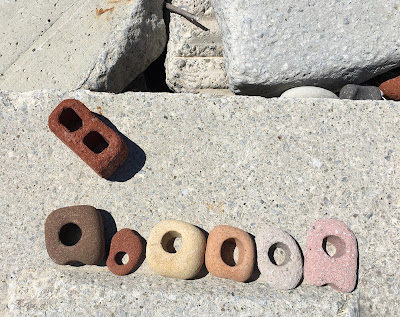 Someone had stacked up flat bits. Old countertops? Facing from some fancy building? Floor tiles? Who knows? 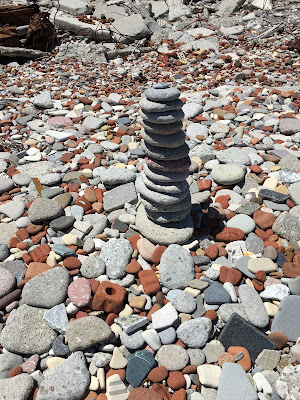 These are some little things I picked up. Glass and tiles. 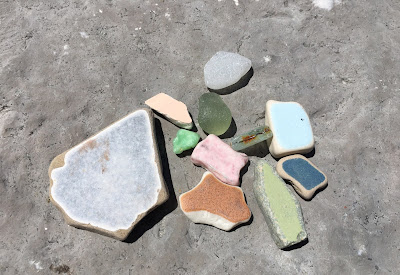 I was a bit restrained, and didn't bring home everything I saw. Three one-hole bricks and a few wee bits of prettiness. 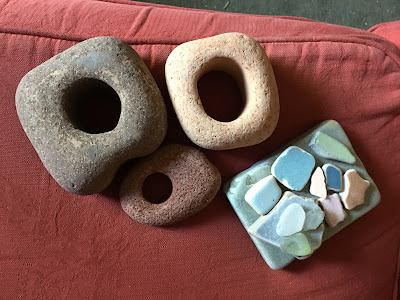 There aren't any people in these pictures but there were a ton of people, mainly on bikes, enjoying the beautiful day and doing a fair job of social distancing. We are still supposed to keep two meters apart from people we don't live with, but can expand our close circles to include ten people. No one knows what that will really mean. If I am in a circle with one friend of mine, I am also in the circle with her three housemates, one of whom is four years old. And if I am in my neighbour's circle, I'm in the same circle with her son, who travels to another town in Ontario for work. I do think it all means we might be able to have a barbecue with a friend or two sometime! I'm still in no hurry to rush out!

I have started a dozen things with this yarn and taken them out again. 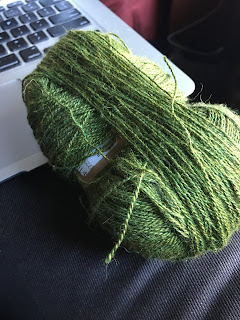 Do I want big lace, 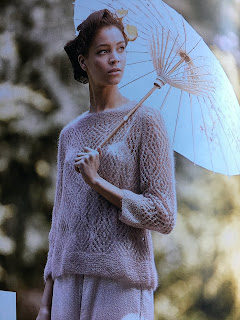 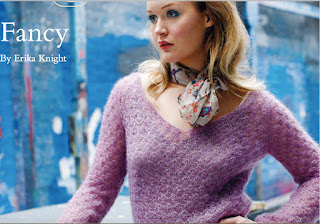 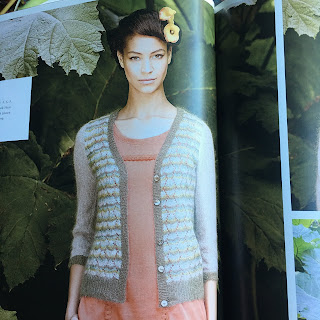 Cardigan, I think. Maybe a shawl, for something different.

But, nothing is right.

So, I am back to sewing ends in on this. 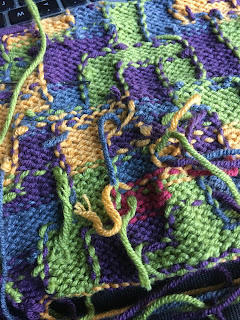 We forgot to put the garden waste out for pickup this morning. Our Thursday routines are crumbling!

(This was meant to be published on Thursday, but I thought I'd get a picture of the blanket to show you... best laid plans...)

Already I can say I have finished one of my June goals. The baby blanket is done, ends sewn in, and any day now I will wash it and it'll be ready to go! I have about 40 grams of yarn left, enough for a tiny Aviatrix hat.

I had fun making one of these in February. I guess I didn't show you because I worried the mom-to-be would see it or something, though that was always pretty unlikely! 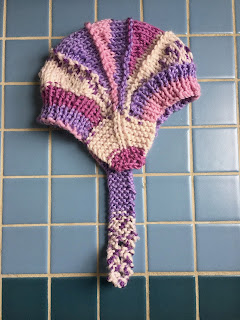 Anyways, I made these two hats in February for my cousin's grandchild, who was born in April.

I had to ask my cousin to sew a button on the Aviatrix, the top one! Somehow in all the hullabaloo of those distant days, I missed that step. Probably because I didn't have a button jar in my rental apartment. 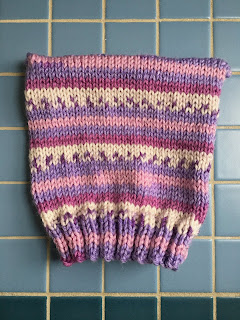 Every baby girl needs a pussy hat in case she has to go to a rally or something. (I know babies are oddly shaped creatures, but I would love to see that hat on an actual baby... so tall! Surely that's wrong, but that's what the pattern said!)

I have no pictures of the blanket, but will get right on that!
Posted by Mary deB at 8:32 am 1 comment:

Let's pretend all is normal and make a to-do list for June.


That's all the knitting, and that is certainly enough.

Other plans are completely up in the air. Who can plan?

Lots of places are opening up more, but Toronto is still getting over a hundred new cases of COVID-19 a day, so I am sure we'll just be sitting on our porch and carefully going to get groceries. A cottage we like to go to in Southampton is available for a few weeks, but the politics of leaving the city for a getaway are fraught, and we are not sure the public health folks will allow it. 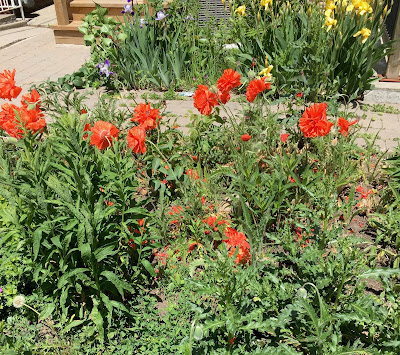