You might think things have been quiet around here, but no, we have been running to and fro like crazy. The school year has finally finished and Arthur has graduated!

Last night was the graduation ceremony. Oh, my, very long! Of course, there is one kid who wins all the awards (Elaine counted; it was actually only six).

The school is extremely diverse, not only in population but in what they teach, so along with Arthur's nerdy math-science cohort, there were also the technical kids who excelled at auto-shop and baking, the developmentally delayed group getting certificates of achievement, people going to top universities, people starting apprenticeships, people coming back to the school to do more courses next year...

Arthur is what they call an Ontario Scholar, which means he had an 80% average over his six best courses, and he got the art prize for photography.

And for those of you who like the red carpet news, he wore a spiffy Brooks Brothers suit (hand-me-down from a friend of ours) and mismatched Crocs. 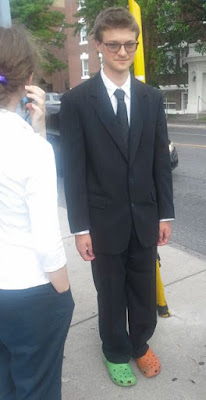 So. No more having two kids in schools across town from each other... now I will have a kid in high school and one away at university! Heavens.

We still have to enjoy the summer before that happens, though. We are going out west for almost three weeks soon, which I am quite looking forward to. As well as visiting family, we have lucked into a cottage on the west coast of Vancouver Island, so we will have sandy beaches and low tide and rainforest and all that jazz.

But first, I need to have a knitting project suitable for travelling. Oh, the fun I had looking through old Vogue Knitting magazines and revisiting old favourites. There are at least a dozen garments which I have fully intended to knit for decades now. I have finally settled on Action by Kim Hargreaves from Denim People. Not sure if I will have the loose ends fraying on my cuffs, but so far I think I will knit it as written. That's a novelty! 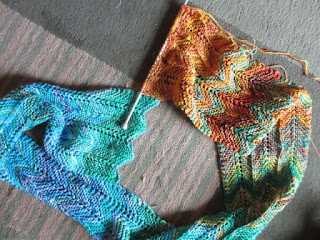 On June 21, halfway through the year, I started spiralling around, and at the end of the right-side row, I knit the stitch together with the edge stitch from the beginning of the scarf. It will be doubly wide, long enough to loop around the neck, lovely colours, soft wool. What could be better? 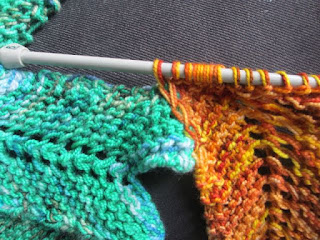 And by December 20th, it will be complete and ready for use.

Now, on with Action. Miles of stocking stitch, but at least I get a few stripes. Stay tuned.
Posted by Mary deB at 9:15 am