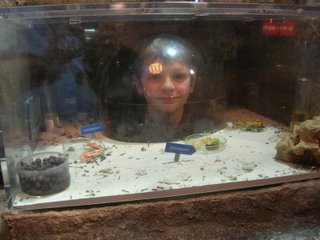 Saturday we went to a big science centre, with the family we were staying with. They have a "tween-age" daughter and a 7-year-old boy who were both great entertainment for our kids, and had a playroom, to boot. And they knew all the cool stuff at the kids' part of the science centre. Like you can crawl around an ant farm and stick your head up a plastic bubble to watch the little critters!

The funny thing about this place is that it recommended certain parts of the musuem for kids, and had lots of parts wherein they didn't cater to the little ones, which is unusual for science centres, isn't it? To think that an adult might be interested in a rocket ship! Or optics, or math!? Heavens... How European, or something... 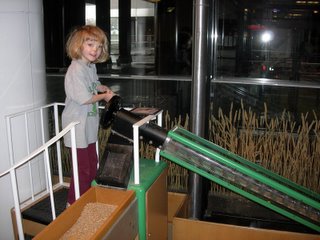 We started off in the kids' part, with Arthur in the 5-12-year-old section and Elaine in the 3-5 section, which she enjoyed immensely, but had a big meltdown when she realised she was in the little kids' part and she could have been in the big kids' part. Here she is bringing wheat up an Archimedes screw, I believe! She also had to deal with water, sand, building blocks with cranes and train cars and all sorts of cool stuff.

We also saw an Ariane rocket engine, chess-playing computers, sound demonstrations, an exhibit on plants... and outside was a big slide for that all-important kid-steam-release part of the day! 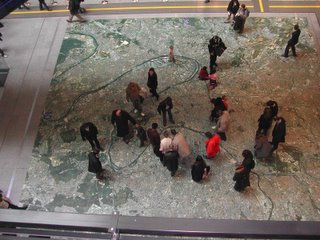 Here we are up on the second floor, looking down on the large photo-map of Paris. This is the pre-Google Earth way to find your house, or the Eiffel Tower, or that park you played in yesterday. It was quite the hoot, and a great rendez-vous point, too!

And perhaps the highlight of the day was when we left our kids with their young friend and our hosts' au pair, and the parents and the older daughter (and a grandma) all went out to dinner in an actual restaurant and had icky stuff like sauce on our fish, and we had wine, and not whine! It was all very civilised and grown-up! And because the portions are not enormous, we had room at the end for dessert. I shall tell you, we shared ravioli a langoustines and some salmon appetizers, then I had tuna steak and Stephen had pork with gingery sauce, and he had cheese for after and I had a lemon mousse with crispy crackers and raspberry sauce. Delish! And the kids were asleep when we got back!

The next day was Elaine's birthday, and we all got up in a lazy sort of way and had pancakes and strawberries for breakfast. The menfolk then went off to fix the dishwasher. This was a big project involving voltmeters and wires and guy-talk. In the end, I think it was decided that they needed to buy a new part. I knit some, and helpfully washed the breakfast dishes, and was almost done when I broke the great big pancake mixing bowl... Disaster! I was reassured, though, that it was just an Ikea bowl, and not a special one like the one another visitor broke... After that, I mainly dealt with the plastic drinking glasses... 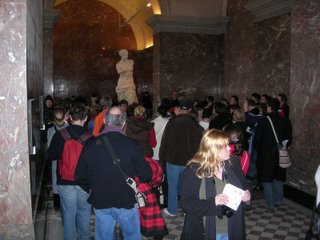 For our last tourist experience, we headed off to the Louvre. There were signs in some parts asking you not to take pictures, and we were told not to worry, there are 35,000 works up on the webpage. You might recognise this one.

One reason given for the no-photograph rule was congestion! It's so crowded in front of the Big Ones that you can't get a decent shot anyways! Here, for example, is the famous Naked Lady with No Arms, or the Venus de Milo.

The kids varied from minute to minute -- I'm tired, this is boring; what's this, lookit this, Dad; 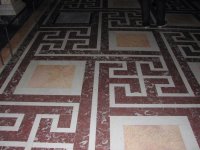 can't we get a drink; wait, slow down, I have to look at this!

This is wearing on the adults... Stephen tried carrying Elaine on his shoulders, but this is not permitted in the galleries, sir.

I took pictures of floors. This is all stone! I love the quilt-ish-ness of them, and of course think of getting some Felted Tweed and whipping up a blanket in these patterns! 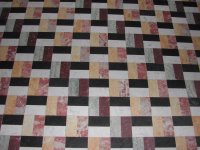 We got back in time for dinner, and were wondering what to do 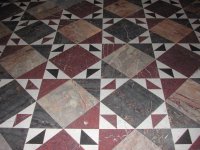 when our host started making sushi with smoked salmon, and we nipped up the street to get some Chinese noodles and other little things. And chocolate cake with ice cream for dessert! What a day...

And then Monday we got the train, and you know the rest. Now I must pop off to knit and eat lunch, and will bring you Olympic results tomorrow. I can tell you that I've almost finished the vest, and have yarn left over with which I have made a curly scarf, and I think I can get a hat out of it, too. The kids counted my yarn again last night, and I'm down to 99 balls! I'm almost done one of Arthur's socks, too! Great progress, Bob.
Posted by Mary deB at 6:35 am