The British Museum and more 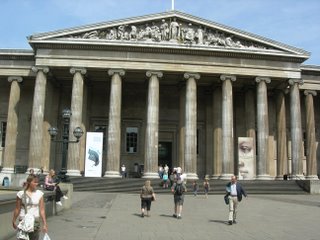 Time is running out! We made a lightning visit to London this week to make sure we'd been to the British Museum in our year here. I notice in the museum map that it says, "Distribution and publication of any ... images is not allowed in any media, including websites." Does that really mean me?? Can I not show you how the floors are not at all like the Louvre's floors, but made of plain grey stones with occasional fossils in them? And I'd love to show you the pics I took of the medieval tiles -- beee-you-tee-ful. And there's all the Parthenon stuff, and the Lewis chessmen and pocket watches and all sorts of great stuff. Also, a very expensive cafe... But go here to see their pictures of the collections.

We wandered all over the museum, and the kids were kinda pooped after lunch. How about a boat trip to Greenwich? Naah, might rain, too long. Westminster Abbey? Good idea, but maybe something outdoors would be better... So, we took a bus to the big parks, with a sort of idea of finding the Diana playground. We found another, which met our needs, and we hung around there for a bit, wondering where to go next. We had to get back to Cambridge that night and didn't want to get home too late, as the kids had to go to school the next morning, and we had to get our bag from our friend's house in Islington... (Next time, a pair of clean undies and a toothbrush in your pocket, no other baggage.) 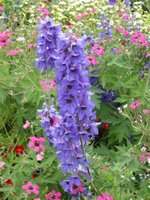 So we decided not to go looking through all of the park for the bigger playground, but headed instead to Buck House. (Want to work for the queen? Look here!)

We had a nice walk through the parks, past an enormous garden with roses like crazy, and this blue flower for Project Spectrum (Stephen's comment on seeing the garden: "Let's not take pictures of every single flower, okay?"); past people riding horses; past the army or some other such organization, running with large packs on. Clouds were gathering. (This is called foreshadowing.) 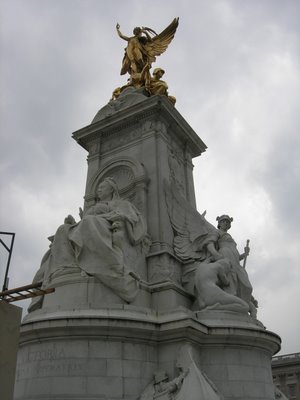 At the palace, the guards were wearing dark plain uniforms, not the full beaver hats and all. There were gilded gates and a few tourists taking pictures. Queen Victoria overlooked the scene from her rather large memorial. We noticed a light on behind the big balcony and wondered who was up there, and was it the queen having a cup of tea, or someone dusting? We shall never know.

Notice the darkening sky... We headed down towards Trafalgar Square, and the skies opened up on us. We dashed from tree to tree. We got soaked. Finally we got to St Martin-in-the-Fields, where they have considerately opened a cafe in the crypt! We had tea with some scones and jam to get our energy up for the final push. Another bus, a short walk, and back to Katherine's for more tea. The kids ventured out into the backyard to see where the foxes live, and we got on yet another bus to the train station. It was still raining when we got to Cambridge and we cycled home through large puddles. 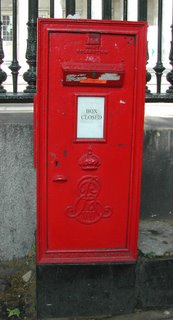 I think this will have been our last trip to see the sights of London. I really, really, really want to go to Elliott Road and Hendon Way, because I learned that there's an Edward VIII pillar box there. These kind people put up their 30-year-old newsletters, so poor schmoes like me can find out things like this! There are also Ed VIII boxes somewhere in Southwark, Birmingham, Coventry, Bawdsey (it's in the last line of this article), and Maidstone, I think. But I can't just go off to Birmingham and hope to spot the one mail box in the city I want. I may just have to leave the country without my Edward VIII, but perhaps I'll find a way. I did see this lovely Ed VII, unused but still sitting there, outside the British Museum. It looks like a wall box without a wall. Peculiar, non? And the cipher is much the same as the one he put on the fancy golden gates at Buckingham Palace. 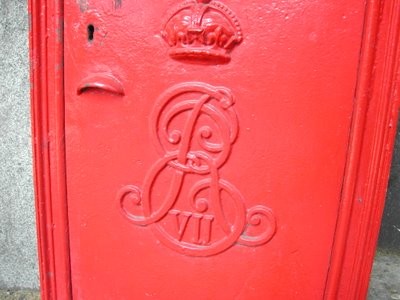