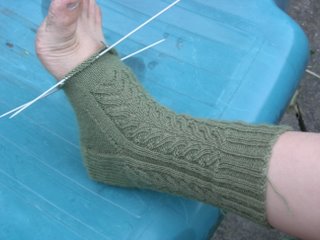 The camera has been busy these past few days, so I just seized the opportunity and took this picture tonight, even though it was getting dark out. Just by the way, I noticed on the BBC weather page the other day that the sun sets after 10 and rises again around 4! No wonder the birds seem to tweet and chirp all night long!

So this is the Swordfish sock, on Arthur's grubby foot. I will do more patterned socks, for sure! See how ridiculously long these needles are! Must get shorter teeny needles sometime soon.

It seems that England won their first game in the football World Cup. Hooray for them. Every kid in town has a team shirt, and every shop has England team stuff for sale. Even the yarn shop has a red and white display! There are two World Cup knitting affairs. Check this out! We don't really care here at the casa del Cam, but it's fun to catch the team spirit and all that jazz, although Cambridge these days is more concerned with finishing exams and gearing up for the May Bumps. Now there's a sporting event we will watch with glee! And we'll take the camera, unlike today when we saw the river full of boats, and unlike the other day when Arthur and I went rowing (not fast!) down toward Grantchester and saw 19 ducklings, 3 cygnets and a black swan on a nest. 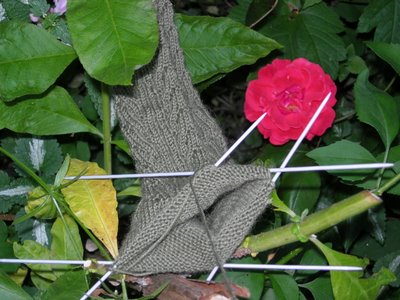 We also discovered, buried deep in the weeds in our garden, two red roses! Arthur hacked a path toward them, and the sock posed with one for you.
Posted by Mary deB at 3:46 pm