Today was the (I hope) first annual Cambridge Punt and Knit! Do it again next year, guys, and I'll watch, from the faraway shores of Lake Ontario.

It worked really well. The skies were grey earlier in the day, but we had pretty fine weather (ie. we didn't have to use the umbrellas stashed in the punt). It is so much nicer to zoom along the Backs with a pro on the pole! If we'd been doing the punting, I'm betting we would have crashed a few times, since the river was very crowded, but whatshisname just got us in and out of the crowds quite handily. 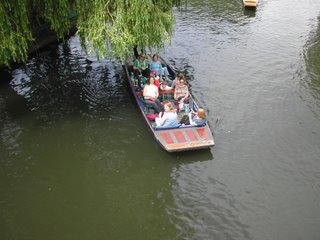 And when we learned that Stephen and Elaine were waiting on the upcoming bridge to take our picture, he got us out from under a tree lickety-split.

We really should have done the group shot, everyone-line-up-on-the-dock style, but we ... didn't. Anyways, here you have Bekki, Emily, Alison, Anne, Avril, Arthur, taking the place of another knitter who was ill, Marcelle, me and Diane. I think Diane has to win the prize for the least accomplished, since she measured her gauge, then ripped out her piece and enjoyed the scenery. 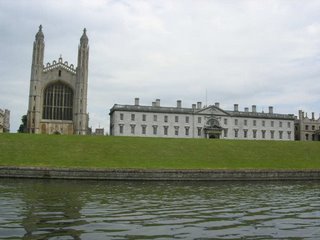 We saw all the Cambridge sights, like King's College Chapel. Alison was doing some contortions to get a picture of the chapel and her new socks, but mine is just the usual view. Only one other puntload of people commented on our knitting. We noticed they were all drinking beer, but couldn't work out any trades.

After our allotted hour, we went back to the usual Saturday knitting spot, the Grads Cafe, where we continued to knit and chat for some time. (It was noted that knitters will put their needles down for food, but only temporarily.) Arthur got bored, despite eating a waffle with syrup and cream, so we left early. The others are still there, for all I know! 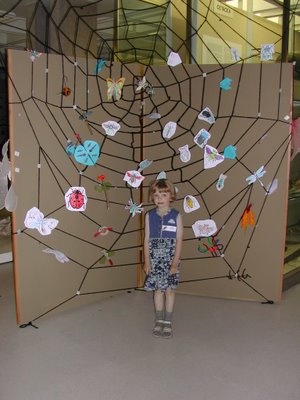 Stephen and Elaine, after catching us from the bridge, went to the Zoology Museum for special insect activities. We joined them, and let stick insects walk on our arms, saw ants that could swim, made bugs to stick in this giant web, and looked at all the cool stuff they have in the museum.

Punting, knitting and a museum, a perfect Cambridge day...
Posted by Mary deB at 2:07 pm