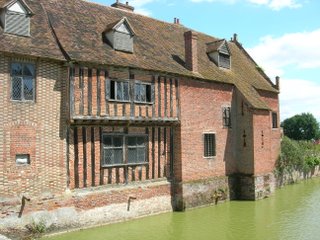 On Thursday I went with Arthur's class to Kentwell. This is the back end of the house. It is privately owned, populated (at least on school visit days) by people in Tudor garb baking bread (the gentry get bread made with white flour, and we saw a woman sieving the bran out with a piece of muslin), dancing to lute music, making cheese balls decorated with flowers, brewing beer and all that lovely old stuff. It's a beautiful house, and there is a garden for cooking herbs and for medicinal herbs, and topiary hedges and a moat with the most well-fed fish! They were enormous. Apparently there's also a rare breed farm and lots more. 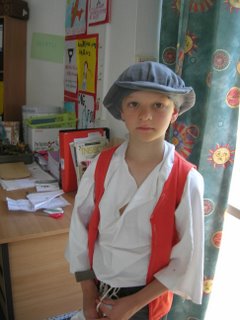 We had to dress in Tudor garb, too. You can see a typical Tudor on Bekki's page! I just wore a long skirt and vest of my own, with a white cap the teacher whipped up for me. I couldn't take pictures of the school kids, but I could take one of my own child, and just imagine busloads of these! All Tudor men's hats were apparently made from the same pattern! Remarkable...

When you go in, you can trade in your 2006 money for Tudor money. They sell biscuits and peaches, and little souvenirs (note: do not 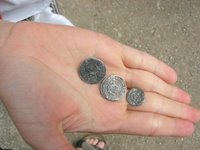 sit next to a kid with a new slate on the coach home. Screeeeeech). Arthur got some biscuits and clay buttons with his bigger coins, and saved the wee one.

Of course, there were ladies sewing, knitting stockings, embroidering wall-hangings and cushions and, I suppose, mending. There was a basket of unspun yarn, but no wheel. Hmm.

There was this pretty basket of blue. 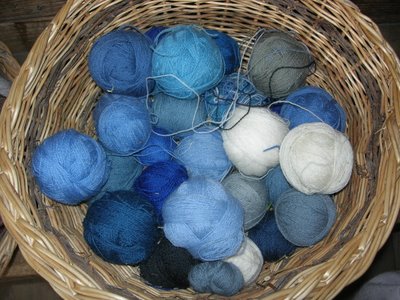 There were some embroidered sleeves just hanging there. 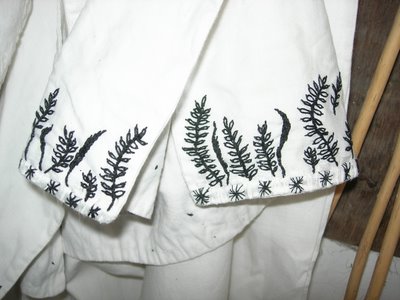 And paint ingredients. By this point in the tour we were a tad behind schedule, and so couldn't stay to hear what they all were! 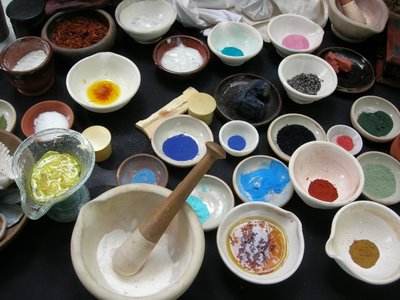 We also whoooshed past basket makers (now there's a skill I think I would like to learn) and alchemists, who showed us a jar full of eyeballs, just for the gross-out part of the tour. The kids loved it, and I would certainly like to go back. 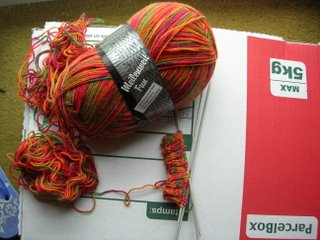 Upon my return to 2006, I met up with my Wednesday knitters, except it was Friday. I wanted to unburden myself of some Summer Tweed (I finished the wrap and never showed you, I think) and so swapped with Alison. I got some more yarn for my pile of squares that will one day be an afghan, and this, which I believe she described to me as "lurid sock yarn." It is indeed! But good lurid, I think...
Posted by Mary deB at 3:22 am