Ah, me, what a weekend! Firstly, since we are moving in a few weeks, the landlord has to show the place to prospective tenants, which means we have to clear the junkola off the floor, coz who would rent a place that's ankle-deep in duplo and paper? Lucky for us, the first report that there would be people through on Saturday was wrong, and we had till Sunday afternoon to make the place presentable. Phew.

On Saturday, we went to the Strawberry Fair. This is what we'd been told about it:
There will be no strawberries.
Oh, it's the hippy fair.
There'll be lots of bald men with lots of tattoos.
Everyone will be drunk. 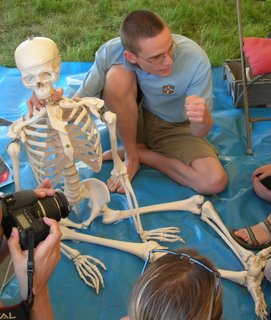 And somewhere, somehow, I thought I'd heard the words "arts and crafts." So I was sure there would be some kindly hippy spinner out there selling homespun wool, but what I found was:
Lots of bald men with lots of tattoos.
Lots of big black dogs not on leashes.
Lots of rainbow coloured stuff for sale.
The wonderful CHaOS roadshow people, with their skeleton.
A samba band, always fun. 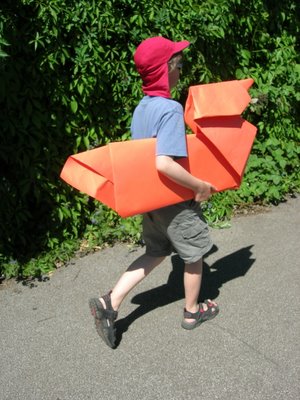 A place you could do giant origami, like make a big orange duck.
A gobsmacking number of people proclaiming their counter-cultural bona fides by wearing Ramones T-shirts.
A ton (or more!) of litter.
Everyone was drunk. Or at least carrying a Tesco bag with a few cans of beer...

You can see pictures of previous ones here.


An odd crowd... We were misled by the person who called it a hippy fair! It was not the "hippy" crowd, like that from, say, Hornby Island, where it's all peace and love -- and where I bought some homespun yarn at the market -- and littering is simply not allowed and recycling is a virtue beyond all others. 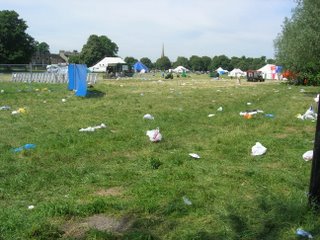 The next day Stephen and Arthur went back to see what was there, and found huge machines gathering the bajillions of dropped beer cans and bottles and other litter from the ground. Now the main part of the common is cleared, but the campers have left a lot of trash. Seems to me odd, since I'm just used to "the environment" being one of the issues at these events. I guess I'm just a tree-hugging Canadian...
Posted by Mary deB at 6:41 am