A sad attempt at non-knitting craft

Once upon a time, like the last day of November, the kids and I remembered an advent calendar we had once seen in an art book. I think there was papier mache involved, and much time and effort, but I am so clever, I can do this without the instructions, or the papier mache, or even much time or effort! 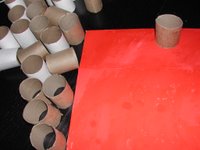 Step 1. Assemble lots of toilet paper rolls and cut them in half.

Step 2. Find an old cereal box, fold (because finding decent scissors is too much work) and paint red. Jeez, 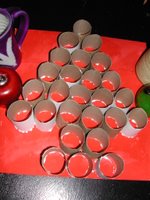 when the kids were littler, we had much bigger paint brushes around the house. This step took much longer than it should have.

Step 3. Glue the toilet rolls into a tree shape! Aren't I clever, indeed? Note the heavy objects holding the cereal box flat while the glue dries.

Step 4. Figure out how to hide treats in each hole, then cover each hole in such a way that a) the treat is hidden until the right day and b) the covering can be removed without wrecking the whole thing. I think that if I'd had the instructions, they would have said something like "Before you glue down the rolls, fill each one with a treat and attach a tissue paper circle carefully around the opening." 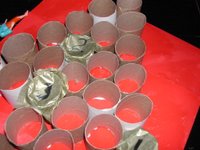 Step 5. Struggle to attach a cover on a roll in the middle of the tree, realise it's not going to work, have a chocolate and go to the store for "real" advent calendars. File important lessons learned away for next year.

Important lessons learned:
At least have the instructions somewhere nearby, in case of need.

Perhaps papier mache is your friend.
Posted by Mary deB at 10:48 am