What I've been doing on my Christmas holiday

Phew... We are slowly working our way around the clock. Usually, I'm up after the 7 am news on the radio, and everyone is out the door to school or work before 9. Today, I woke up after 9! That first week of school will be kinda tough, I'm thinking!

We had a friend over on the 25th for dinner, and that was very nice, and we ended up with a seemingly endless supply of leftovers. I knew we were having a pile of relatives on the 27th and 28th, but was rather taken by surprise by teenagers who can go through a box of cereal a day. Next time, I'll stock up, though I think no one actually went hungry this time. (Is eating broken gingerbread train bits in your cereal a sign of desperation or not?) 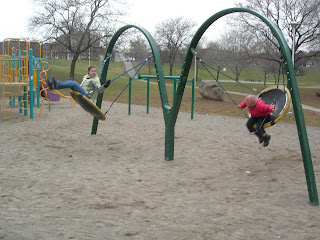 I gave my brother and uncle dishcloths, and my sister-in-law a scarf as soft as a kitten (though it turns out she was keen for a dishcloth -- I told her the boys should be the ones using it most!). This is Arthur and his... um... she's my cousin's daughter, so that makes her my first cousin once removed, I believe, and then she's Arthur's second cousin? In any case, she is a fine cousin, who will push swings for a while before swinging herself. She seemed a dainty eater, unlike her other second cousins... I have pictures of the lot of them stuffing popcorn into their mouths, but perhaps they're not for general viewing. 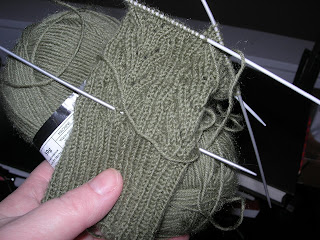 I put aside the knitting I'd been doing because there should have been measuring and thinking involved, so here we have the temporarily abandoned green sock. I now realise Arthur's feet are several centimeters longer than they were a year or more ago when I knit his other socks, and so really do want to get going on these...

Elaine's red dress is almost done, I'd say. I have to finish the back of the bodice and then do the front, and there is hardly any finishing -- though shouldn't one do a wee crochet edging or something around the neckline? We shall see. Sorry for the flashy indoor picture! 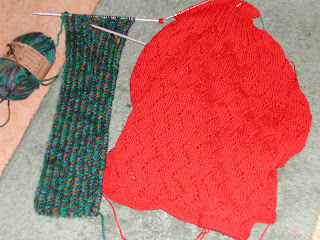 Those are the two things I want to finish first, then I start on the nine months of knitting from stash... I didn't make it to the Boxing Day sales at all, though I suppose I still have a day to stock up. Last time I took stuff in to Streetknit, they gave me four balls of this nice multicoloured wool, and I've been doing a boring mistake rib scarf to pass the time. This is a ball and a bit, so it'll be about 5 feet long in the end.

And if I don't manage to post tomorrow, here's wishes for a Happy New Year to one and all! Mwa.
Posted by Mary deB at 10:48 am